What is alpha lipoic acid

Alpha-Lipoic Acid also called thioctic acid or 1,2-dithiolane-3-pentanoic acid (pentanoic acid), is a naturally occurring short chain fatty acid which contains a thiol bond, synthesized in small amounts by plants and animals (including humans), with antioxidant and potential chemopreventive activities 1). Chemically, alpha lipoic acid is a short-chain fatty acid with a disulfide group in its dithiolane ring and a chiral carbon resulting in R and S enantiomers (see Figure 1 below). Although the majority of the commercially produced alpha lipoic acid consists of a racemic admixture, the R form, (R)-α-Lipoic acid, is the biologically active form that is endogenously produced by the body, while the S form is produced from chemical manufacture and is not biologically active 2). Only R-α-Lipoic acid is conjugated to conserved lysine residues in an amide linkage, thus making this isoform essential as a cofactor in biological systems 3). At the cellular level, alpha lipoic acid is reduced to dihydrolipoic acid (DHLA), which has a number of cellular actions including free radical scavenging and modulating oxidative stress and inflammatory pathways 4). Alpha lipoic acid, when exogenously administered, is readily absorbed from the gut and has been clinically used in Europe for the treatment of diabetic polyneuropathy 5). 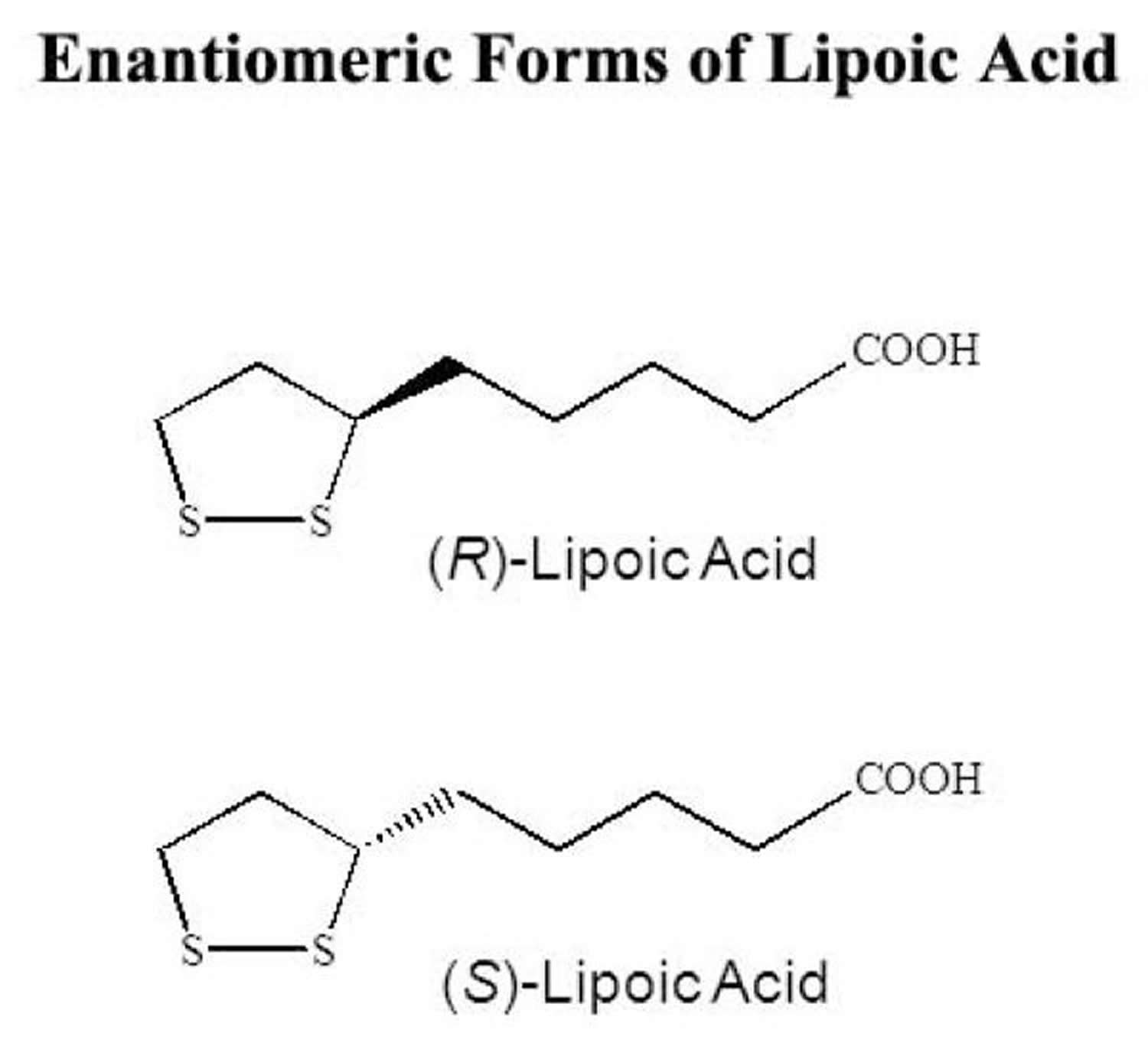 Alpha-lipoic acid acts as a free radical scavenger and assists in repairing oxidative damage and regenerates endogenous antioxidants, including vitamins C and E and glutathione. Alpha lipoic acid also promotes glutathione synthesis. In addition, alpha-lipoic acid exerts metal chelating capacities and functions as a cofactor for energy production in the mitochondria in various mitochondrial enzyme complexes involved in the decarboxylation of alpha-keto acids and thus serves a critical role in mitochondrial energy metabolism 7).

Alpha lipoic acid is marketed in the US as an over-the-counter nutritional antioxidant supplement, alone or in combination with other antioxidants. In medicine, alpha lipoic acid has been shown to reduce symptoms of diabetic polyneuropathy, and several clinical trials established some efficacy and an excellent safety profile in this patient population 8).

Alpha-lipoic acid is a type of antioxidant and chemoprotective agent. Alpha-lipoic acid is an antioxidant — a substance the body can use to prevent or manage a tissue-damaging process called oxidative stress. Oxidative stress is a part of the diabetic neuropathy disease process. Alpha-lipoic acid also has been shown to reduce blood sugar levels. Alpha lipoic acid is being studied for its ability to protect normal cells from the side effects of chemotherapy and prevent peripheral neuropathy (numbness, tingling, burning, and weakness in the hands or feet) 9). A few small clinical trials have tested the treatment effect of alpha-lipoic acid given either as a supplement or intravenously. People with diabetic neuropathy had reduced pain, improvements in nerve function tests and improvements in other clinical measures of diabetic neuropathy (Han T, Bai J, Liu W, et al. A systematic review and meta-analysis of α-lipoic acid in the treatment of diabetic peripheral neuropathy. European Journal of Endocrinology. 2012;167(4):465-471.)). But long-term studies are needed.

Alpha-lipoic acid is being studied for its effect on complications of diabetes, including diabetic macular edema (an eye condition that can cause vision loss) and diabetic neuropathy (nerve damage caused by diabetes).

Alpha-lipoic acid supplements are generally considered safe when taken as recommended. However, toxicity might occur if you take this supplement when you have a significant thiamin (vitamin B-1) deficiency. Don’t use alpha-lipoic acid if you’re a heavy user of alcohol.

What is alpha lipoic acid used for

Diabetic peripheral neuropathy can be classified clinically as either focal or diffuse. Diffuse disease can affect the sensorimotor or the autonomic nervous systems or both. Sensorimotor disease can involve large or small nerve fibers 17), is usually predominantly sensory, and may be painful.

Distal symmetrical sensorimotor polyneuropathy is the most common form of diabetic peripheral neuropathy, with a reported prevalence in diabetes mellitus ranging from 28.5% to 45%, increasing with age and disease duration 18). Distal symmetrical sensorimotor polyneuropathy represents a major cause of morbidity and the leading source of diabetes-related hospitalizations and non-traumatic amputations. It is also accountable for considerable physical disability, altered quality of life, and increased mortality 19).

Diabetic peripheral neuropathy pathophysiology can mainly be explained as neural dysfunction caused by the interplay of decreased blood flow to nerves as a result of hyperglycaemia, and increased oxidative stress, which induces local inflammatory reactions through reactive oxygen species (ROS) 28). Prolonged hyperglycemia simultaneously activates multiple pathways. It promotes the following:

The benefit of alpha lipoic acid in people with diabetes could range beyond antioxidant and anti-inflammatory effects. The therapeutic properties of alpha lipoic acid might include the ability to restore glucose availability and increase insulin-stimulated glucose transport and non-oxidative and oxidative glucose metabolism in insulin-resistant muscle cells 48). Alpha lipoic acid has therefore been a candidate for clinical study in diabetic peripheral neuropathy.

In summary, findings from 2017 75) and 2018 meta-analyses 76) suggest that alpha lipoic acid may be a useful supplementation for weight loss in overweight and obese individuals in reducing body weight and BMI, but has no significant effect on waist circumference. The benefits of alpha lipoic acid compared to placebo appear smaller than that of available prescription weight loss medications 77). However, alpha lipoic acid can be considered in clinical practice due to its benign side-effect profile, other beneficial effects such as in diabetic neuropathy, and lower side effects comparing to the available weight loss medications. Further research is needed to examine the effect of different doses and the long-term benefits of alpha lipoic acid on metabolic parameter in unhealthy obese individuals.

Effects of alpha lipoic acid on the vascular system

Inflammation results from the innate biological response of vascular tissues to harmful agents, such as pathogens or irritants. It is an attempt by the organism to remove the injurious stimuli, protect the surrounding tissue, and initiate the healing process. However, unabated chronic inflammation also contributes to a host of diseases, such as atherosclerosis, asthma, and rheumatoid arthritis. Elevated levels of oxidative stress play an important role in chronic inflammation. Oxidative stress-associated inflammation is thought to provoke early vascular events in atherogenesis, including the upregulation of vascular adhesion molecules and matrix metalloproteinase activity. These events require the activation of NF-kappaB, a transcription factor that induces expression of many genes involved in inflammation and endothelial cell migration. Given the oxidative nature of inflammation, therapeutic strategies aimed at mitigating oxidant production and oxidative damage have been investigated for decades in various models of inflammation.

In keeping with this strategy, alpha lipoic acid has been studied for its antioxidant properties in cytokine-induced inflammation; it is also widely known as an inhibitor of NF-kappaB 90). Results show that alpha lipoic acid lowers expression of vascular cell adhesion molecule-1 (VCAM-1) and endothelial adhesion of human monocytes 91), and inhibits NF-kappaB-dependent expression of metalloproteinase-9 in vitro 92). Similarly, alpha lipoic acid (25-100 μg/ml = 122-486 μM) prevents the upregulation of intercellular adhesion molecule-1 (ICAM-1) and vascular cell adhesion molecule-1 (VCAM-1) in spinal cords and in TNF-alpha stimulated cultured brain endothelial cells 93). Collagen-induced arthritis was attenuated by alpha lipoic acid (10-100 mg/kg i.p.) in DBA/1 mice by reduction of inflammatory cytokines like TNF-alpha, and partial inhibition of NF-kappaB binding to DNA 94). In this study, alpha lipoic acid also inhibited osteoclast formation, suggesting that alpha lipoic acid may be useful in the prevention of bone erosion and joint destruction in rheumatoid arthritis. In another study, pretreatment of collagen sheets with alpha lipoic acid (2 mg) prior to implantation decreased TNF-alpha-induced bone resorption in ICR mice 95). In experimental autoimmune encephalomyelitis (an animal model of multiple sclerosis) alpha lipoic acid-treated mice showed marked improvement in central nervous system infiltrating T-cells and macrophages, decreased demyelination and spinal cord expression of adhesion molecules (ICAM-1 and VCAM-1) 96). The downregulation of surface CD4 seen in alpha lipoic acid-treated blood mononuclear cells was proposed to account, at least in part, for the modulation of inflammatory cell infiltration into the central nervous system 97). This is because co-receptor CD4 amplifies the signal generated at the T-cell receptor by recruiting lymphocyte protein kinase Lck, which in turn triggers a cascade of events leading to T-cell activation. Interestingly, DHalpha lipoic acid did not downregulate CD4 from the surface of human peripheral blood mononuclear cells 98). As an alternative or in addition to CD4 downregulation, the immunomodulatory properties of alpha lipoic acid may involve the upregulation of cAMP in T-cells and natural killer cells 99). Cell migration and neovascularization were also inhibited by alpha lipoic acid (86 μg/day in drinking water) in c57/black mice injected with Kaposi’s sarcoma in a matrigel sponge, as well as in nude mice injected with KS cells 100). In a mouse model of bronchial asthma, dietary alpha lipoic acid significantly attenuated airway hyper-responsiveness, lowered the eosinophil count among bronchoalveolar lavage cells, and significantly improved pathologic lesion scores of the lungs 101). alpha lipoic acid inhibits TNF-alpha-induced NF-kappaB activation and adhesion molecule expression in human aortic endothelial cells via a mechanism seemingly distinct from antioxidants, such as ascorbate or reduced GSH, but consistent with the workings of a metal chelator 102). Recently, the inhibition of endotoxin-induced acute inflammation by alpha lipoic acid was associated with the stimulation of the PI3K/Akt pathway 103).

To date, the anti-inflammatory properties of alpha lipoic acid have rarely been investigated in humans. The ISalpha lipoic acidND (ISLAND) trial showed a 15% significant decrease in serum interleukin-6 levels following 4 weeks of supplementation with alpha lipoic acid (300 mg/day) 104). This finding may prove important to human health because interleukin-6 is a recognized marker of inflammation in coronary atherosclerotic plaques, and also regulates the expression of other inflammatory cytokines, such as interleukin-1 and TNF-alpha 105). However, the body of evidence is currently too limited to be conclusive.

However, despite the evidence attesting to its safety in moderate doses, precautions for the oral intake of alpha lipoic acid have also been voiced. Cakatay et al. 107) conducted a series of experiments in aged rats with intraperitoneal administration of racemic alpha lipoic acid (100 mg/kg body weight per day for 2 weeks) and showed that this high chronic dose (the equivalent of 5 to 10 grams per day in humans) increased plasma lipid hydroperoxide levels and oxidative protein damage 108). Alpha lipoic acid-mediated protein damage was noted in rat heart 109) and brain 110), but lipid hydroperoxide levels were beneficially decreased in both these organs. Apparently in keeping with its metal chelating abilities, this group noted that alpha lipoic acid lowered selenium levels in the serum, heart, brain, and muscle; manganese was lowered only in the heart, but increased in the brain and muscle 111). Thus, while intake of moderate doses of alpha lipoic acid have relatively few adverse side-effects, alpha lipoic acid may mediate oxidative insult at higher doses or when administered intraperitoneally. More research is therefore warranted regarding both the safety and optimal dose of alpha lipoic acid.

The most commonly reported side effects that were related with alpha lipoic acid in these two studies 112), 113) were gastrointestinal symptoms, such as abdominal pain, nausea, vomiting, and diarrhea 114) and dermatological symptoms, such as urticaria and itching sensation. One subject in the 1800 mg/d alpha-lipoic acid group and 3 subjects in the 1200 mg/d alpha-lipoic acid group withdrew because of itching sensation 115).