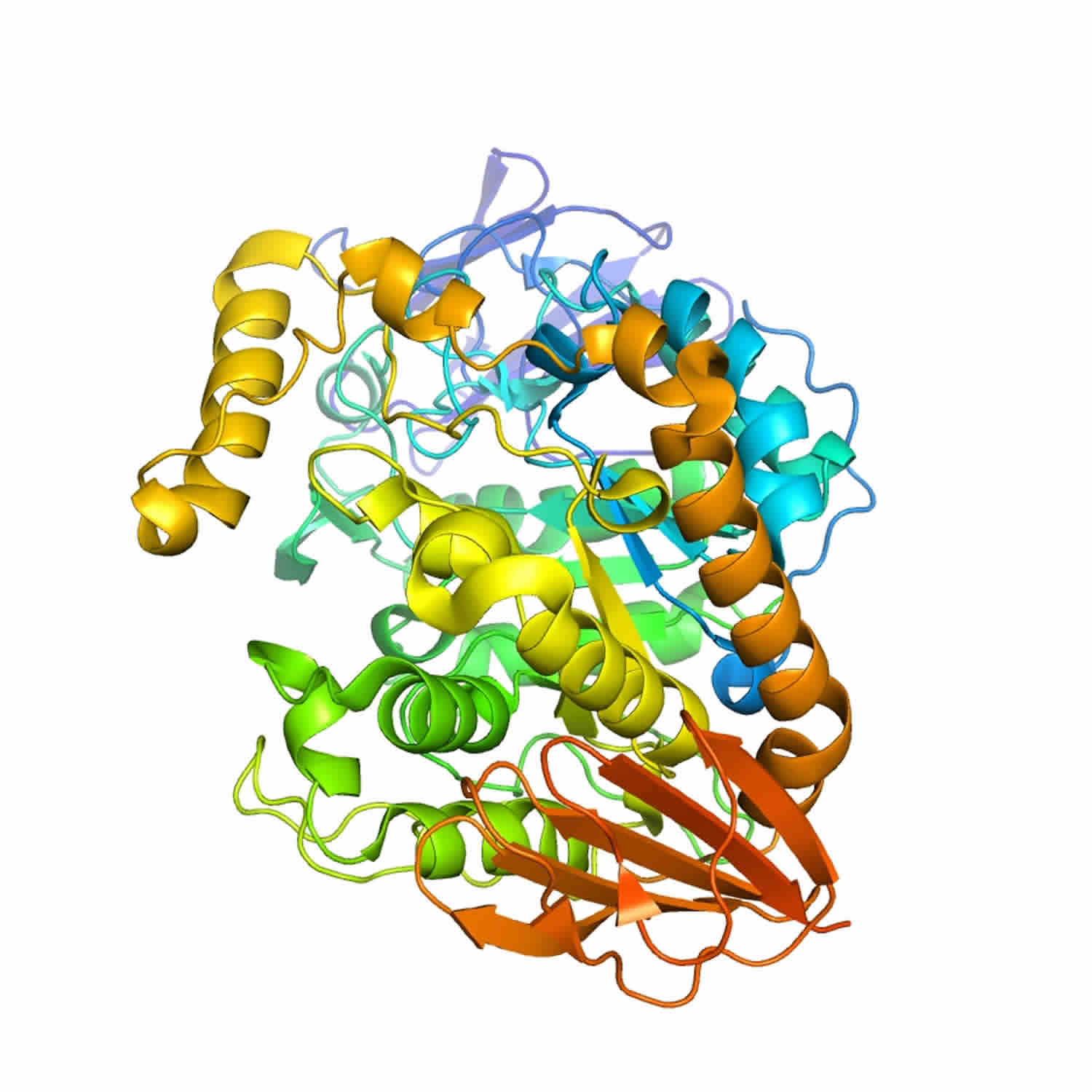 Amylase is an enzyme that helps digest carbohydrates (starch and glycogen) into simple sugar [glucose (monosaccharide) and maltose (disaccharide)] for energy. Amylase is made in the pancreas and the salivary glands that make saliva. Amylase is also found in microbes, plants and animals. Amylases are broadly classified into α (alpha), β (beta), and γ (gamma) subtypes, of which the first two have been the most widely studied. Alpha amylase (α-Amylase) is a faster-acting enzyme than beta amylase (β-amylase). The amylases act on α-1-4 glycosidic bonds and are therefore also called glycoside hydrolases 1. Microbial amylases obtained from bacteria, fungi, and yeast have been used predominantly in industrial sectors and scientific research. Microbial enzymes have been generally favored for their easier isolation in high amounts, low-cost production in a short time, and stability at various extreme conditions, and their compounds are also more controllable and less harmful. Microbially produced enzymes that are secreted into the media are highly reliable for industrial processes and applications. Furthermore, the production and expression of recombinant enzymes are also easier with microbes as the host cell. Applications of these enzymes include chemical production, bioconversion (biocatalyst), and bioremediation.

The food enzyme is an alpha amylase (4‐α‐d‐glucan glucanohydrolase; EC 3.2.1.1) produced with the genetically modified Bacillus licheniformis strain NZYM‐AV by Novozymes A/S 2. The European Food Safety Authority 2018 review found genetic modifications do not give rise to safety concerns 2. The food enzyme does not contain the production microorganism or its DNA; therefore, there is no safety concern for the environment. The α‐amylase is intended to be used in starch processing for the production of glucose syrups and distilled alcohol production 2. Genotoxicity tests did not raise a safety concern. The subchronic toxicity was assessed by means of a repeated dose 90‐day oral toxicity study in rodents. The European Food Safety Authority Panel derived a no observed adverse effect level (NOAEL) at the highest dose level of 796 mg total organic solids/kg body weight per day. The allergenicity was evaluated by comparing the amino acid sequence to those of known allergens and one match was found. The European Food Safety Authority Panel considered that, under the intended condition of use, the risk of allergic sensitization and elicitation reactions by dietary exposure cannot be excluded, but the likelihood is considered low 2. Based on the microbial source, the genetic modifications, the manufacturing process, the compositional and biochemical data, the removal of total organic solids during the intended food production processes and the toxicological and genotoxicity studies, the European Food Safety Authority Panel concluded that this food enzyme does not give rise to safety concerns under the intended conditions of use 2.

Figure 1. Amylase enzyme function – hydrolysis of starch. Starch is a polysaccharide made up of simple sugars (glucose). Upon the action of amylase, either glucose (a monosaccharide) or maltose (a disaccharide with two glucose molecules) is released. 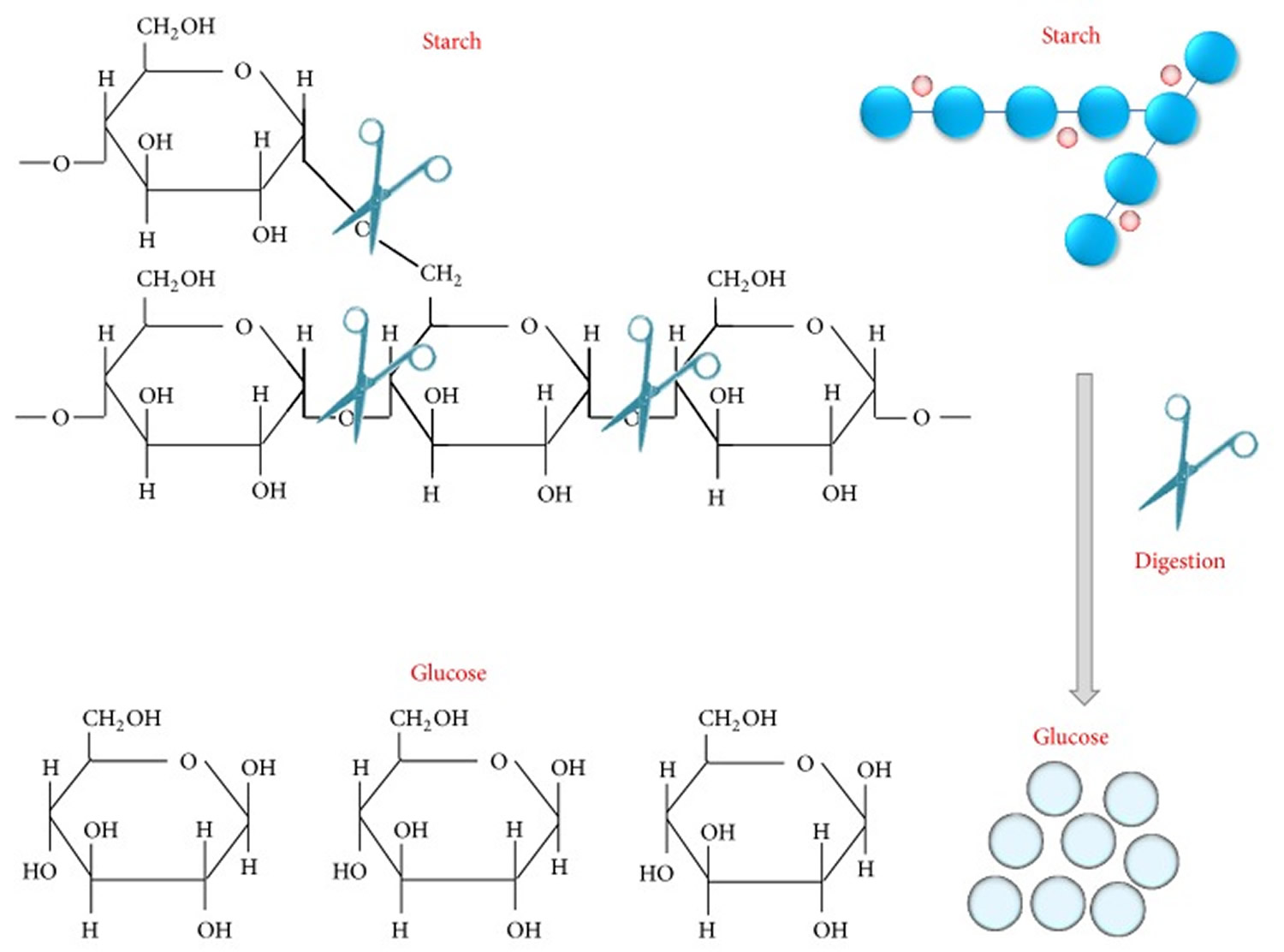 In human, amylase enzyme is secreted through the pancreatic duct into the first part of the small intestine (duodenum), where it helps break down dietary carbohydrates. Amylase is usually present in the blood and urine in small quantities. When cells in the pancreas are injured, as happens with pancreatitis, or when the pancreatic duct is blocked by a gallstone or by a pancreatic tumor in rare cases, increased amounts of amylase are released into the blood. This increases concentrations of amylase in the blood and also in the urine as amylase is eliminated from the blood through the urine. A test can be done to measure the level of amylase enzyme in your blood. Amylase may also be measured with an amylase 24 hour urine test.

A urine amylase test may also be ordered. Typically, its level will mirror blood amylase concentrations, but both the rise and fall will occur later. Sometimes a urine creatinine clearance may be ordered along with the urine amylase to help evaluate the ratio of amylase to creatinine that is filtered by the kidneys. This ratio is used to assess kidney function because improper function can result in a slower rate of amylase clearance.

In certain cases, for example when there is an accumulation of fluid in the abdomen (ascites), an amylase test may be performed on peritoneal fluid to help make a diagnosis of pancreatitis.

Amylase tests are sometimes used to monitor treatment of cancers involving the pancreas and after the removal of gallstones that have caused gallbladder attacks.

Note: Normal value ranges may vary slightly among different laboratories. Talk to your provider about the meaning of your specific test results.

The examples above show the common measurements for results for these tests. Some laboratories use different measurements or may test different specimens.

A blood amylase test may be ordered when a person has symptoms of a pancreatic disorder, such as:

A urine amylase test may be ordered along with or following a blood amylase test. One or both may also be ordered periodically when a health practitioner wants to monitor a person to evaluate the effectiveness of treatment and to determine whether amylase levels are increasing or decreasing over time.

A high amylase level in the blood may indicate the presence of a condition affecting the pancreas. Urine and blood amylase levels may also be moderately elevated with a variety of other conditions, such as ovarian cancer, lung cancer, tubal pregnancy, acute appendicitis, diabetic ketoacidosis, mumps, intestinal obstruction, or perforated ulcer, but amylase tests are not generally used to diagnose or monitor these disorders.

High levels of amylase may indicate:

Low levels of amylase can indicate:

Drugs that can increase amylase measurements include:

In acute pancreatitis, amylase in the blood often increases to 4 to 6 times higher than the highest reference value, sometimes called the upper limit of normal. The increase occurs within 4 to 8 hours of injury to the pancreas and generally remains elevated until the cause is successfully treated. Then the amylase values will return to normal in a few days.

In chronic pancreatitis, amylase levels initially will be moderately elevated but often decrease over time with progressive pancreas damage. In this case, levels returning to normal may not indicate that the source of damage has been resolved. The magnitude of increase in amylase level does not indicate severity of pancreatic disease.

Amylase levels may also be significantly increased in people with pancreatic duct obstruction and pancreatic cancers.

In general, urine amylase levels rise in proportion to blood amylase levels and will stay elevated for several days after blood levels have returned to normal.

An increased level of amylase in peritoneal fluid can occur in acute pancreatitis but may also occur in other abdominal disorders, such as obstructed intestine or decreased blood flow to the intestines (infarct).

A low amylase level in blood and urine in a person with pancreatitis symptoms may indicate permanent damage to the amylase-producing cells in the pancreas. Decreased levels can also be due to kidney disease and toxemia of pregnancy.

Increased blood amylase levels with normal to low urine amylase levels may indicate the presence of a macroamylase, a benign complex of amylase and other proteins that accumulates in the blood.

Where is amylase produced?

What does amylase do

Mammalian pancreatic alpha amylase (α-amylase) binds specifically to glycoprotein N-glycans in the brush-border membrane to activate starch digestion, whereas it significantly inhibits glucose uptake by Na+/glucose cotransporter 1 (SGLT1) at high concentrations 14. However, how the inhibition is stopped was unknown. This study provides novel and significant insights into the control of blood sugar during the absorption stage in the intestine 15.

Pancreatic enzyme supplements are used by people whose bodies do not make enough amylase enzyme to digest their food such as patients with cystic fibrosis or chronic pancreatitis; or patients who have had their pancreas removed or who have had gastrointestinal bypass surgery or suffer from ductal obstruction. The amylase enzyme is usually extracted from pig pancreas.

Amylase supplement is approved for the uses listed above. If you would like more information, ask your doctor.