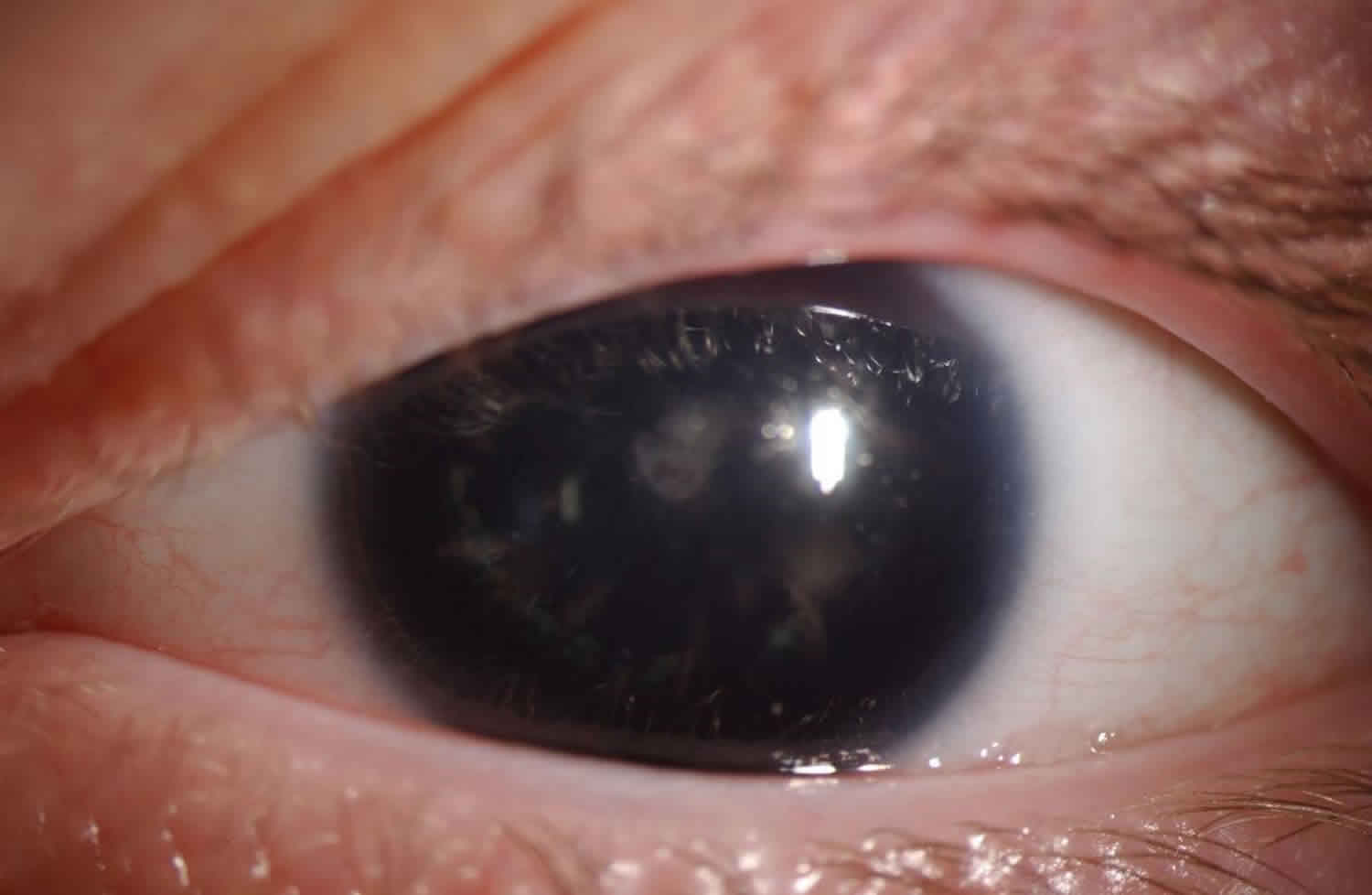 Aniridia is a rare sight-threatening genetic eye disorder in which there is complete or partial absence of the colored part of the eye (the iris) that is associated with other ocular features, some present from birth (congenital aniridia) and some arising progressively over time 1. These iris abnormalities may cause the pupils to be abnormal or misshapen. Aniridia can cause reduction in the sharpness of vision (visual acuity) and increased sensitivity to light (photophobia).

People with aniridia can also have other eye problems. Increased pressure in the eye (glaucoma) typically appears in late childhood or early adolescence. Clouding of the lens of the eye (cataracts), occur in 50 percent to 85 percent of people with aniridia. In about 10 percent of affected people, the structures that carry information from the eyes to the brain (optic nerves) are underdeveloped. Individuals with aniridia may also have involuntary eye movements (nystagmus) or underdevelopment of the region at the back of the eye responsible for sharp central vision (foveal hypoplasia). Many of these eye problems contribute to progressive vision loss in affected individuals. The severity of symptoms is typically the same in both eyes. The phenotype may vary between and within families; however, affected individuals usually show little inter-ocular difference.

Most cases are diagnosed at birth with an obvious iris/pupillary abnormality or in infancy with nystagmus (usually apparent by six weeks of age). Photophobia may also be present. Slit-lamp examination commonly discloses small anterior polar cataracts, sometimes with persistent pupillary membrane strands attached.

Despite their many ocular problems, most individuals with aniridia retain useful vision with appropriate ophthalmologic management. 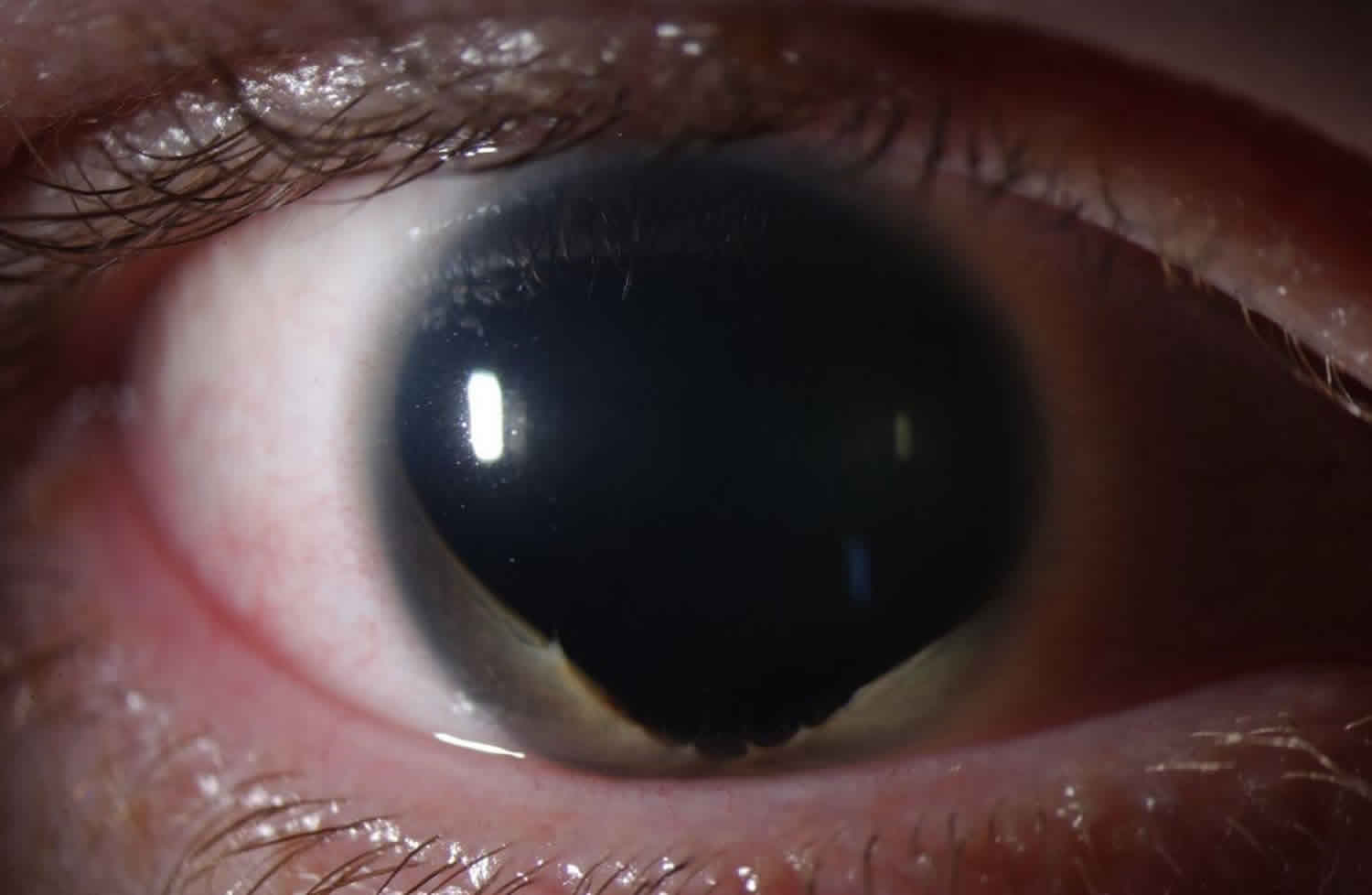 Footnote: Aniridia can also present as partial absence of the iris as demonstrated here, with residual iris on the inferior margin. Of note, there is almost always residual iris in all cases of aniridia, but the iris might be so small as only to be visible with careful exam or gonioscopy.

The exact cause of congenital aniridia is unknown. However, the paired box gene (PAX6) gene mutations at chromosome 11p13 is a crucial factor in pathogenesis. The PAX6 gene provides instructions for making a protein that is involved in the early development of the eyes, brain and spinal cord (central nervous system), and the pancreas. Within the brain, the PAX6 protein is involved in the development of a specialized group of brain cells that process smell (the olfactory bulb). The PAX6 protein attaches (binds) to specific regions of DNA and regulates the activity of other genes. On the basis of this role, the PAX6 protein is called a transcription factor. Following birth, the PAX6 protein regulates several genes that likely contribute to the maintenance of different eye structures.

Three hundred PAX6 mutations have been identified; 286 are associated with congenital eye malformations; 257 of them cause aniridia and the reminder 29 cause related ocular phenotypes such as Peters anomaly, foveal hypoplasia, and optic nerve anomalies 1:

The Aniridia phenotype may be the result of:

In the Aniridic phenotype, 94% of all intragenic point mutations lead to the introduction of a premature termination codon (PTC), or to C-terminal extensions (CTE), or aminoacid substitutions (missense mutations).

Various genes implicated in the pathogenesis of congenital aniridia include:

The autosomal dominant mode of inheritance, which means one copy of the altered gene in each cell is sufficient to cause the disorder, accounts for two-thirds of aniridia cases and has no systemic implications. Penetrance is complete but expressivity is variable 1. It is caused by mutation in the PAX6 gene on chromosome 11p13 or deletion of the regulatory regions that control its expression.

In cases where the autosomal dominant condition does run in the family, the chance for an affected person to have a child with the same condition is 50% regardless of whether it is a boy or a girl. These possible outcomes occur randomly. The chance remains the same in every pregnancy and is the same for boys and girls.

The remaining one-third of cases result from new mutations (sporadic aniridia) in the gene and occur in people with no history of the disorder in their family 5. The sporadic form occurs due to de novo deletions on chromosome 11p13 involving the PAX6 gene. Larger deletions affecting the adjacent WT1 (Wilms tumor) gene are the underlying cause of the WAGR syndrome (Wilms tumor, Aniridia, Genitourinary anomalies, and mental Retardation) 6.

Autosomal recessive aniridia accounts for approximately 2% of all cases. It is associated with cerebellar ataxia and mental retardation (Gillespie syndrome) 7. Nelson et al 8 considered that the specific iris abnormality characterized by circumpupillary aplasia leading to a fixed dilated pupil is pathognomonic for Gillespie syndrome. In fact, it may help distinguish from other forms of aniridia and a presumptive diagnosis of Gillespie syndrome can be made during the first months of life. Owing to its rarity, the inheritance pattern and molecular basis of this syndrome are still unclear. However, at least one form may be caused by a heterozygous PAX6 mutation. 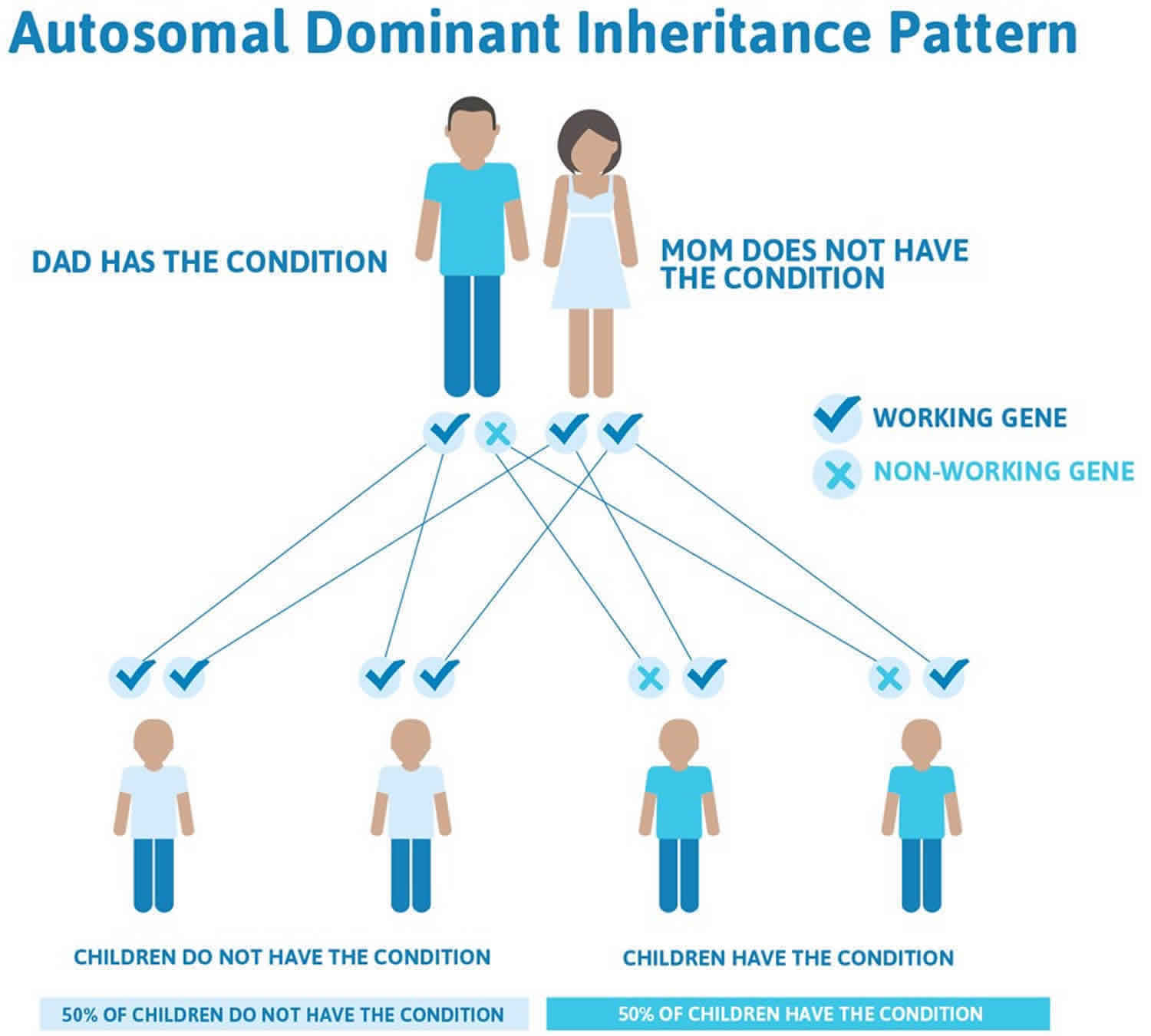 There are three recognized clinical phenotypes of aniridia:

Autosomal dominant congenital aniridia consists of at least 2/3rd cases of congenital aniridia and may be present in up to 85% cases with aniridia. This variant is autosomal dominant and the most common form of aniridia; it has complete penetrance but variable expressivity. Thus family members may have different severity of aniridia, ocular involvement, and visual acuity. Some cases may have subtle iris hypoplasia or iris coloboma.

There is a de novo mutation of the PAX6 gene and may consist of 13% to 33% of cases with aniridia. An important fact is that this variant of aniridia correlates with nephroblastoma (Wilm’s tumor) as a part of WAGR syndrome (Wilms tumor, aniridia, genitourinary anomalies, and mental retardation), also known as Miller’s syndrome. The genitourinary anomalies include undescended testes in males and streak gonads (nonfunctional ovaries) and/or bicornuate uterus in females. Intellectual disability includes difficulty in learning and processing information. There might be other manifestations including attention deficit hyperactivity disorder, obsessive-compulsive disorder, depression, and anxiety. There may be craniofacial dysmorphism.

WAGR syndrome occurs as the chromosomal location of the PAX6 gene at 11p13 is very close to WT1 (Wilm’s tumor) gene. There is a partial deletion of the short arm of chromosome 11 involving both PAX6 and WT1 in this syndrome. Patients with WAGR syndrome have around 45 to 60% chance of developing nephroblastoma. Approximately 25% to 33% of patients with sporadic congenital aniridia may develop nephroblastoma before 3 years of age 9.

The patients usually complain of photophobia related to the severity of aniridia and poor vision (due to many reasons including foveal hypoplasia and optic nerve head hypoplasia) since early childhood. Parents may bring the child for the abnormal appearance of the eyes.

Nystagmus and strabismus are common due to poor vision since childhood.

Other ocular findings include:

Other associations of aniridia include:

Individuals with aniridia may show central auditory processing difficulties (from abnormal interhemispheric transfer), which may cause hearing difficulties.

Children with sporadic aniridia must be investigated to determine if it is caused by a chromosomal rearrangement affecting both the PAX6 and WT1 genes (Wilms tumour, pediatric nephroblatoma predisposition gene). However, chances of Wilms tumor is very very rare in familial aniridia. Classical WAGR syndrome includes Wilms tumor with Aniridia, Genitourinary abnormalities and mental Retardation, but the phenotype is highly variable. The term ‘WAGR syndrome’ is used even in the absence of all four classical features.

It is a rare variant form of aniridia associated with cerebellar ataxia, ptosis and mental retardation. The molecular basis of classical Gillespie syndrome remains unidentified. Owing to its rarity the inheritance pattern is unclear. PAX6 intragenic mutations have been reported in two individuals with phenotypes overlapping this syndrome, however these cases probably have atypical aniridia.

Aniridia may be complicated by:

The fundus fluorescein angiogram reveals the lack of a well-defined foveal avascular zone.

Optical coherence tomography in foveal hypoplasia shows the absence of foveal depression and the presence of the inner retinal layers.

In sporadic congenital aniridia, Wilm’s tumor must be ruled out by regular ultrasonogram of the abdomen. Also, genetic evaluation for PAX6 and WT1 gene is possible.

Ophthalmic examination of the family members is of utmost importance.

The food and drug administration has approved an artificial iris implant. It may improve the disabling glare, light sensitivity during day or night, improve cosmesis and vision-related quality of life. However, there is a risk of development or worsening of glaucoma, and limbal stem cell deficiency. Customflex artificial iris may be used to treat

Glaucoma – The medications usually fail to control glaucoma, and surgical intervention is needed. Glaucoma presenting before 1 year of age is very difficult to treat. Surgery is often necessary for glaucoma by 20 years of age in patients with congenital aniridia. The options for surgical therapy include:

The success of surgical intervention may not be significant. In a study, success rates for various interventions were:

Okada and colleagues 18 noted that ‘mean good intraocular pressure control period after the filtering surgery was 14.6 months’. The success rate of trabeculectomy is better in older patients and Nelson and colleagues reported successful trabeculectomies in 11 of 14 cases with the minimum follow-up of 1 year 9. Ultimately, if other modalities fail to control intraocular pressure, cycloablative therapies may be needed which include diode laser cyclophotocoagulation and cyclocryotherapy. Prophylactic goniotomy may prevent the development of glaucoma in congenital aniridia 19.

The cataract in aniridia may need extraction. Surgery is difficult due to zonular weakness and fragility of the lens capsule. The eye may be left aphakic, and postoperatively contact lens or aphakic glasses may be prescribed. Special intraocular lens (IOL) for aniridia is available which have a peripheral colored region like iris of different pigmentation. Tinted IOLs are also available which can reduce photophobia. In extreme subluxation, scleral-fixated IOL may be necessary. Surgical trauma may increase the chances of glaucoma, corneal decompensation, and limbal stem cell deficiency.

However, the survival of corneal graft is often poor due to multiple causes including corneal vascularization, limbal stem cell deficiency, severe dry eye, and glaucoma.

The associated squint and ptosis may need correction.

Visual prognosis is usually poor. Up to 86% of patients with aniridia may have a visual acuity of 20/100 or worse in the better eye. The cause of visual decline include

However, members of some families with familial aniridia may have good vision of at least 20/30 in up to 61% of cases 24. 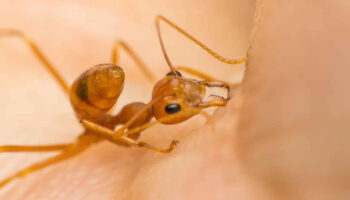 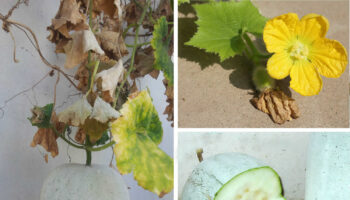 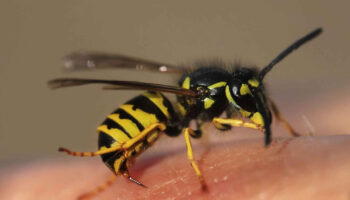 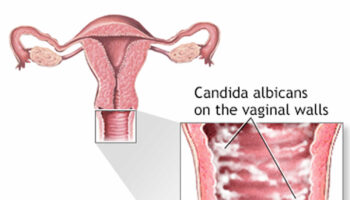 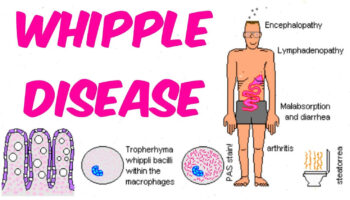