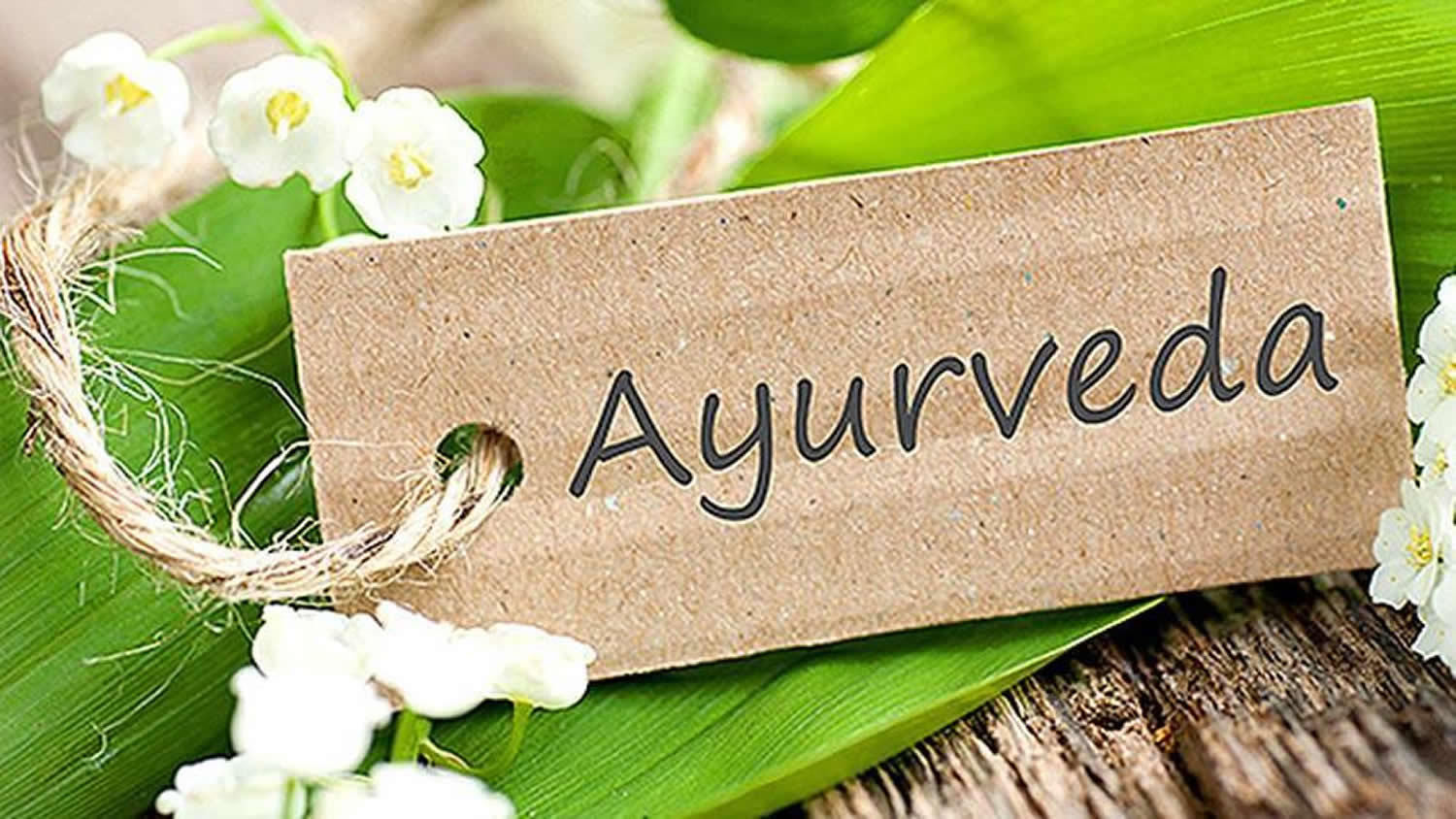 Ayurveda also called Ayurvedic medicine is one of the world’s oldest medical systems. The term “Ayurveda” (“knowledge or science of life”) combines the Sanskrit words ayur (life) and veda (science or knowledge). According to Ayurveda all objects and living bodies are composed of five basic structural elements (Panchamahabhutas), namely Vayu (air), Teja (fire), Aap (water), Prithvi (earth) and Akasha (ether) 1) – are believed to build up the living microcosm (human beings) and the macrocosm (external universe). When combined in pairs, the Panchamahabhutas form Tridosha or the three humors namely Vata (responsible for body movement), Pitta (responsible for bodily chemical reactions such as metabolism and temperature) and Kapha (responsible for growth, protection, lubrication and sustenance). These three doshas are physiological entities in living beings or Prakriti of an individual, which determines the physical as well as mental characteristic of human. Ayurveda aims to keep the structural and physiological entities in a state of equilibrium, which signifies good health. Any imbalance due to internal or external factors may cause disease 2). The concept is that health is achieved when there is a balance between these three fundamental doshas, whereas imbalance causes diseases. Based on these Panchamahabhutas and Tridosha, the Prakriti of an individual is determined and a distinctive treatment plan can be prescribed according to their unique constitution 3).

Ayurveda originated in India more than 3,000 years ago and remains one of the country’s traditional health care systems 4). It is similar to traditional Chinese medicine in believing that matter and energy are the same thing. Many Ayurvedic practices predate written records and were handed down by word of mouth. Three ancient books known as the Great Trilogy were written in Sanskrit more than 2,000 years ago and are considered the main texts on Ayurvedic medicine—Caraka Samhita, Sushruta Samhita, and Astanga Hridaya – defining life as body, mind and spiritual awareness. India’s government and other institutes throughout the world support clinical and laboratory research on Ayurvedic medicine, within the context of the Eastern belief system. But Ayurvedic medicine isn’t widely studied as part of conventional (Western) medicine.

Ayurveda concepts about health and disease include universal interconnectedness (among people, their health, and the universe), the body’s constitution (prakriti), and life forces (dosha), which are often compared to the biologic humors of the ancient Greek system. Using these concepts, Ayurvedic physicians prescribe individualized treatments, including herbal compounds or proprietary ingredients and special diets, exercise, and lifestyle recommendations. Therapy consists of three major categories: divine therapy (daiva vyapasraya), rational therapy (yukti vyapasraya cikitsa) and psychotherapy (sattvavajaya) 5). Ayurveda largely uses plants as raw material for the manufacture of drugs, though materials of animal and marine origin, metals and minerals are also used. There are more than 400 drugs listed in The Ayurvedic Pharmacopoeia of India 6).

Ayurvedic medicine uses a variety of products and practices. Ayurvedic products are made either of herbs only or a combination of herbs, metals, minerals, or other materials in an Ayurvedic practice called rasa shastra. Some of these products may be harmful if used improperly or without the direction of a trained practitioner.

Ayurvedic products have the potential to be toxic 10), 11). Many materials used in them haven’t been studied for safety in controlled clinical trials. In the United States, Ayurvedic products are regulated as dietary supplements. As such, they aren’t required to meet the same safety and effectiveness standards as conventional medicines. In India, whereas most of the Ayurvedic herbal medicines are manufactured and exported, the regulation of Ayurvedic herbal preparation manufacturing is somewhat less stringent, despite the establishment of Drugs and Cosmetic Act to control the manufacture and quality control. Besides, individual physicians today require no license to prepare medicines and administer them to patients 12). Undetected adulteration, substitution, contamination and short cuts during manufacturing are common, bringing to incidents such as presence of synthetic anti-inflammatory drugs in anti-arthritic Ayurvedic medicines, excessive heavy metals contamination, lacking of proper processing and storage of marketed products under undesirable conditions 13).

In 2008 a study examined the content of 193 Ayurvedic products purchased over the internet and manufactured in either the United States or India. Saper et al 14) from Harvard Medical School found that 21 percent of the products contained levels of lead, mercury, and/or arsenic that exceeded the standards for acceptable daily intake 15). Robert et al 16) conducted a study to determine the prevalence and concentration of heavy metals in Ayurvedic herbal medicine products manufactured in South Asia and sold in Boston-area stores. They concluded that one of 5 Ayurvedic herbal medicine products produced in South Asia and available in Boston South Asian grocery stores contains potentially harmful levels of lead, mercury, and/or arsenic. Moreover, drug experts have estimated that approximately 6000 medicines in the “Ayurvedic Formulary” which intentionally contain at least one metal, with mercury and lead the most widely used 17). These toxic elements are known to be potent nephrotoxic, hepatotoxic, neurotoxic and hematotoxic agents 18). Researches have revealed the metal content in a vast number of Ayurvedic Rasausadhies and toxicity cases due to Ayurvedic herbal consumptions have been reported throughout the last decade 19), 20), 21). Center for Disease Control and Prevention also reported lead poisoning cases in pregnant women associated with the use of Ayurvedic medications, which may adversely affect the health of both mother and child 22).

Other approaches used in Ayurvedic medicine, such as massage, special diets, and cleansing techniques may have side effects as well 23). To help ensure coordinated and safe care, it’s important to tell all your health care providers about any Ayurvedic products and practices or other complementary and integrative health approaches you use.

What the Science Says About the Effectiveness of Ayurvedic Medicine Research

Most clinical trials of Ayurvedic approaches have been small, had problems with research designs, or lacked appropriate control groups, potentially affecting research results.

Researchers have studied Ayurvedic approaches for schizophrenia 24) and for diabetes 25); however, scientific evidence for its effectiveness for these diseases is inconclusive.

Ayurvedic practitioners use turmeric for inflammatory conditions, among other disorders. Evidence from clinical trials show that turmeric may help with certain digestive disorders and arthritis, but the research is limited.

Arjuna (Terminalia arjuna) contains saponin glycosides, which accounts for its primary activity in improving cardiac muscle function and pumping activity of the heart, whereas the flavonoids afford antioxidant action and vascular strengthening 28). The volatile oil of ginger (Zingiber officinale) on the other hand contains phenolic compounds (shogaols and gingerols) as well as sesquiterpenes (bisapolene, zingiberene and zingiberol) producing analgesic, sedative, antipyretic and antibacterial activities 29). Both in vitro and in animals; clove oil and cinnamon leaf oil obtained from the dried flower buds of Syzygium aromaticum and leaves of Cinnamomoum zeylanicum respectively, contain eugenol as their main constituent and thus possess antimicrobial activities, i.e. antibacterial and antifungal activities 30). Another example is lemongrass (Cymbopogon citrates) essential oil which contains three major phytoconstituent: Geranial, neral and myrcene. The former two showed in vitro antibacterial action individually, but not myrcene. However when mixed with any of the two components, myrcene enhanced their activity 31). Cumin, black pepper and asafoetida are used together traditionally to reduce bloating due to weak digestion; whereas guduchi and turmeric combination booster one’s immunity 32), 33).

The concurrent use of Ayurvedic herbal formulations with allopathic drugs is increasing as most of the individual patients do not inform their medical practitioners on the concomitant treatments 35). However, many have not noted the possible drug-herb interactions, which may affect their pharmacological or toxicological effects, subsequently results in adverse effects that deteriorate health 36), 37). Many Ayurvedic herbs commonly used in formulation of Ayurvedic herbal formulations are reported to contribute to drug-herb interactions [Table 2] 38), 39). 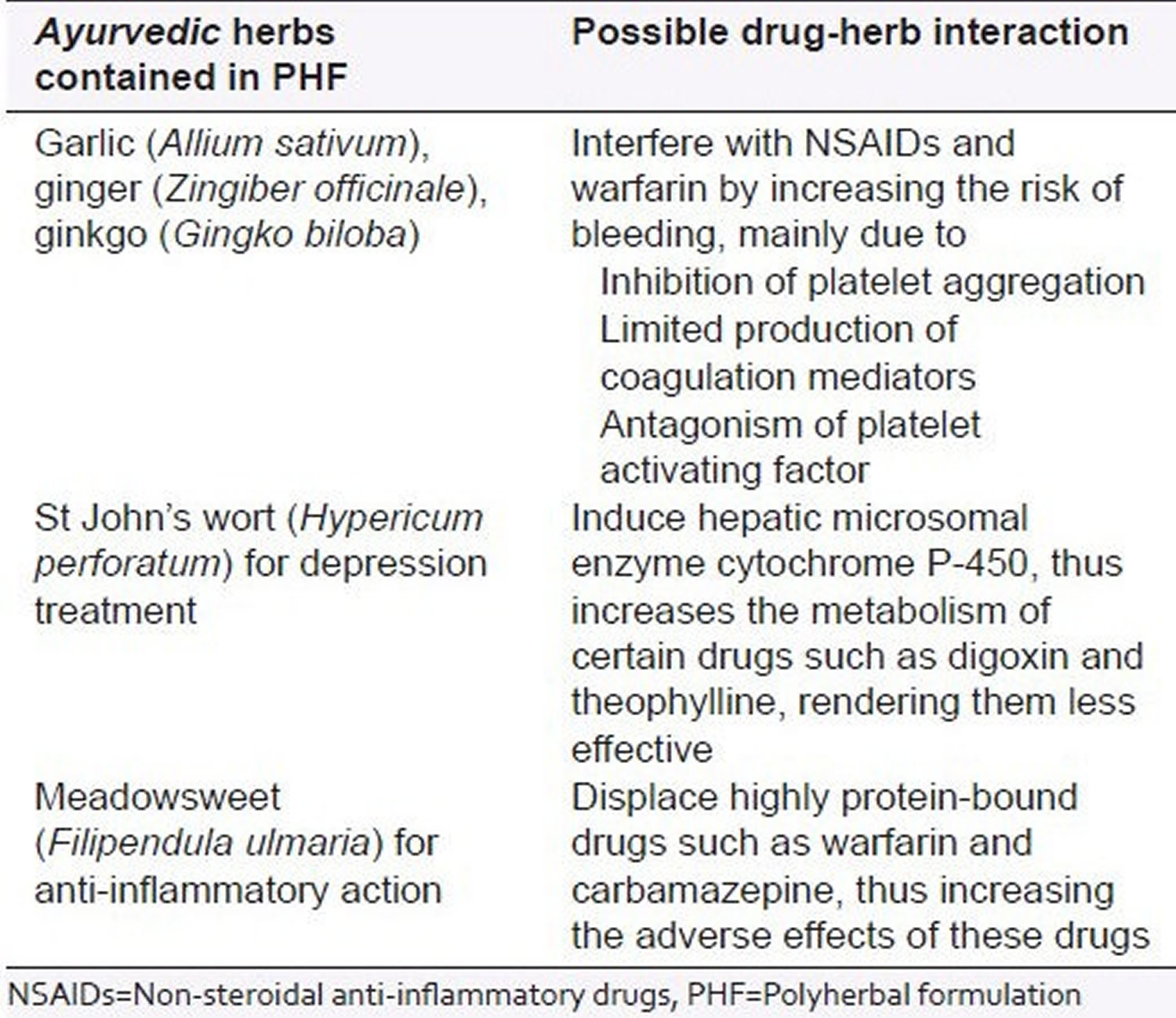