What are the benefits of cordyceps sinensis mushroom 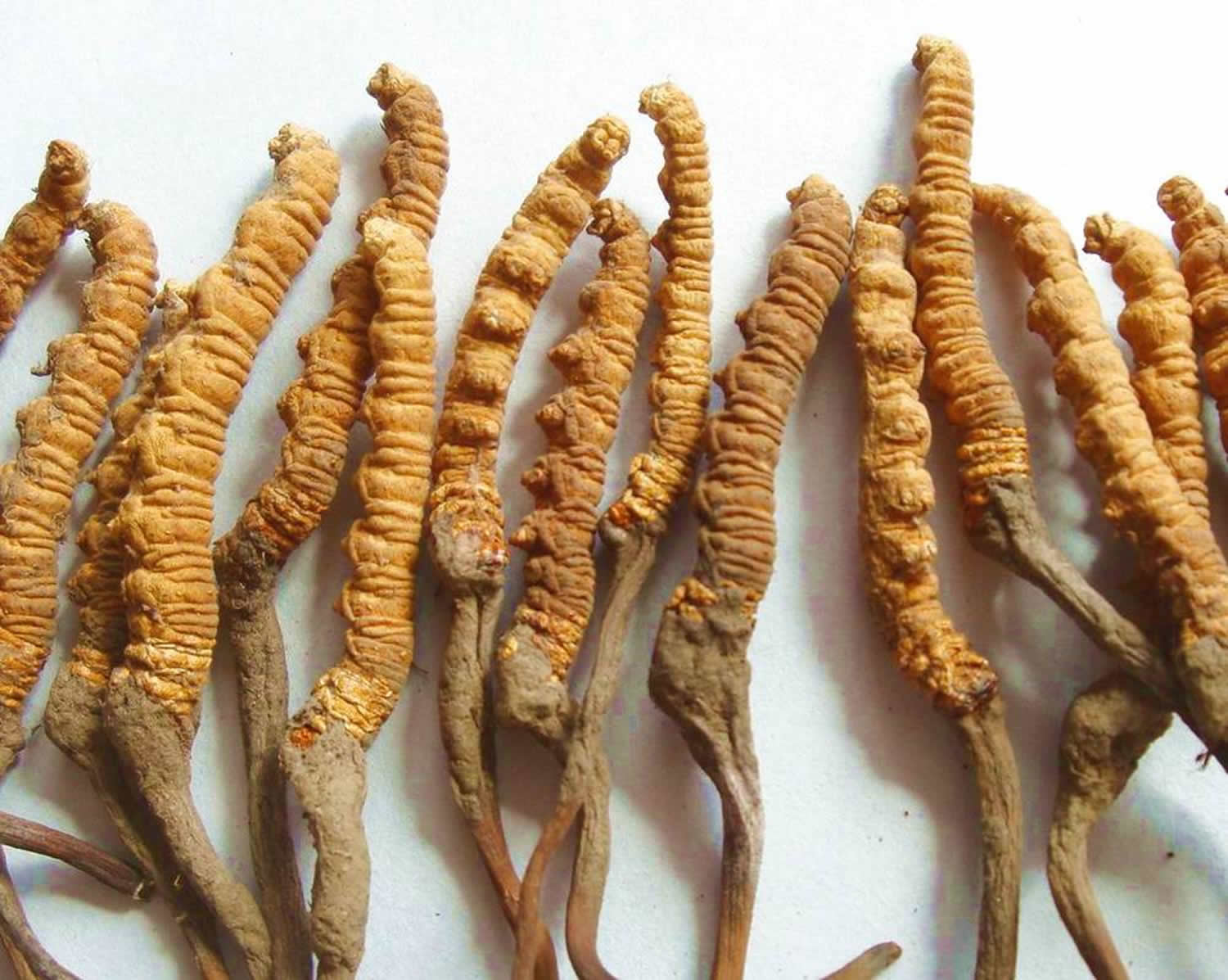 What is cordyceps sinensis mushroom

Cordyceps is the composite of a genus of fungus of Ascomycete fungi (sac fungi) that grows on the larva of insects 1). To date, more than 350 Cordyceps-related species have been found worldwide based on fungus and/or insect host. However, since 1964, only Cordyceps sinensis has been recorded officially as an herbal drug in Chinese pharmacopoeia 2). 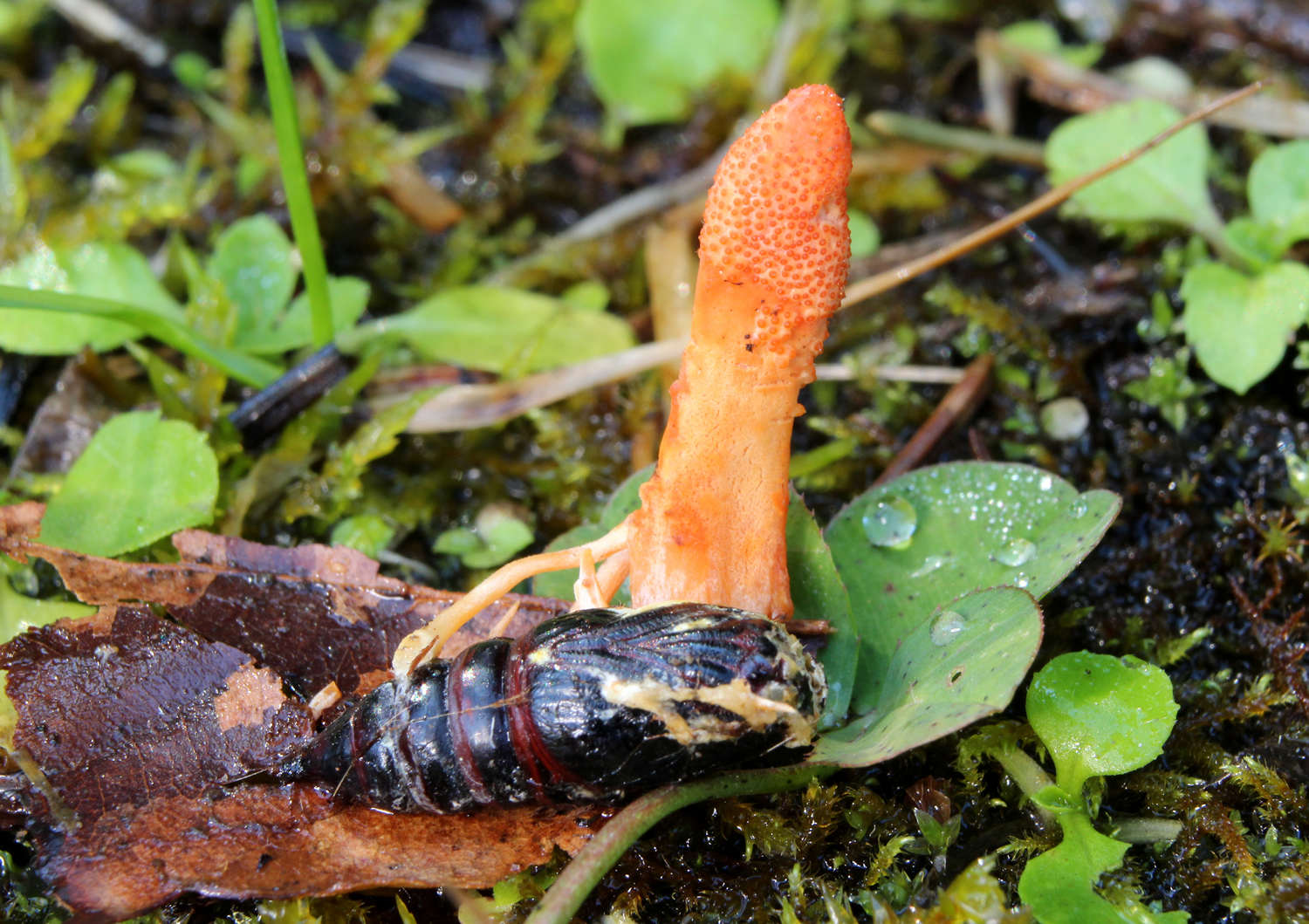 Note: The cordyceps fungi infects insects, and slowly kills the organism. Once the insect is dead, the fungi continue to grow until the body of the fungi grows out of the insects’ head or body and releases more spores to attack other insects.

Cordyceps Sinensis also known as Dongchongxiacao (winter-worm summer-grass) in Chinese, is one of the most famous traditional Chinese medicines and medicinal mushrooms. The fungus attacks the larva of some species of insects (Fam. Hepialidae), and converts each larva to a sclerotium, from which the fruiting body grows 3). The name cordyceps comes from Latin words meaning club and head. The mycological features, related species and vernacular names are given in Table 1. According to the theory of Chinese medicine, Cordyceps sinensis is sweet in taste and neutral in nature, and it can replenish the kidney, soothe the lung, stop bleeding, and eliminate phlegm. The fungus Cordyceps sinensis has been used for the treatment of fatigue, cough, hyposexuality, asthenia after severe illness, renal dysfunction, and renal failure 4). In China, Cordyceps Sinensis is found in the soil of prairies at elevations of 3500–5000 m, in cold, grassy, alpine meadows mainly in the provinces of Qinghai, Tibet, Sichuan, Yunnan, Gansu and the Himalayan mountains. In China, Cordyceps sinensis has been known and used as a remedy for more than 300 years.

The normal harvesting period stretches from April to August. The fungus is parasitic in nature. The base of the mushroom first originates from an insect larval host (Hepialis armoricanus family Hepialidac) and ends at the club-like cap, including the stipe and stroma. The fruit body is dark brown to black, and the root of organism, the larval body pervaded by the mycelium, is yellowish to brown color 5). The immature larvae (host) on which cordyceps grows usually lies about 6 inches below the surface of the ground. As the fungus approaches maturity, it consumes more than 90% of the infected insect effectively mummifying its host. As the stroma matures, it swells up and develops perihelia. The average weight of cordyceps is about 300–500 mg. 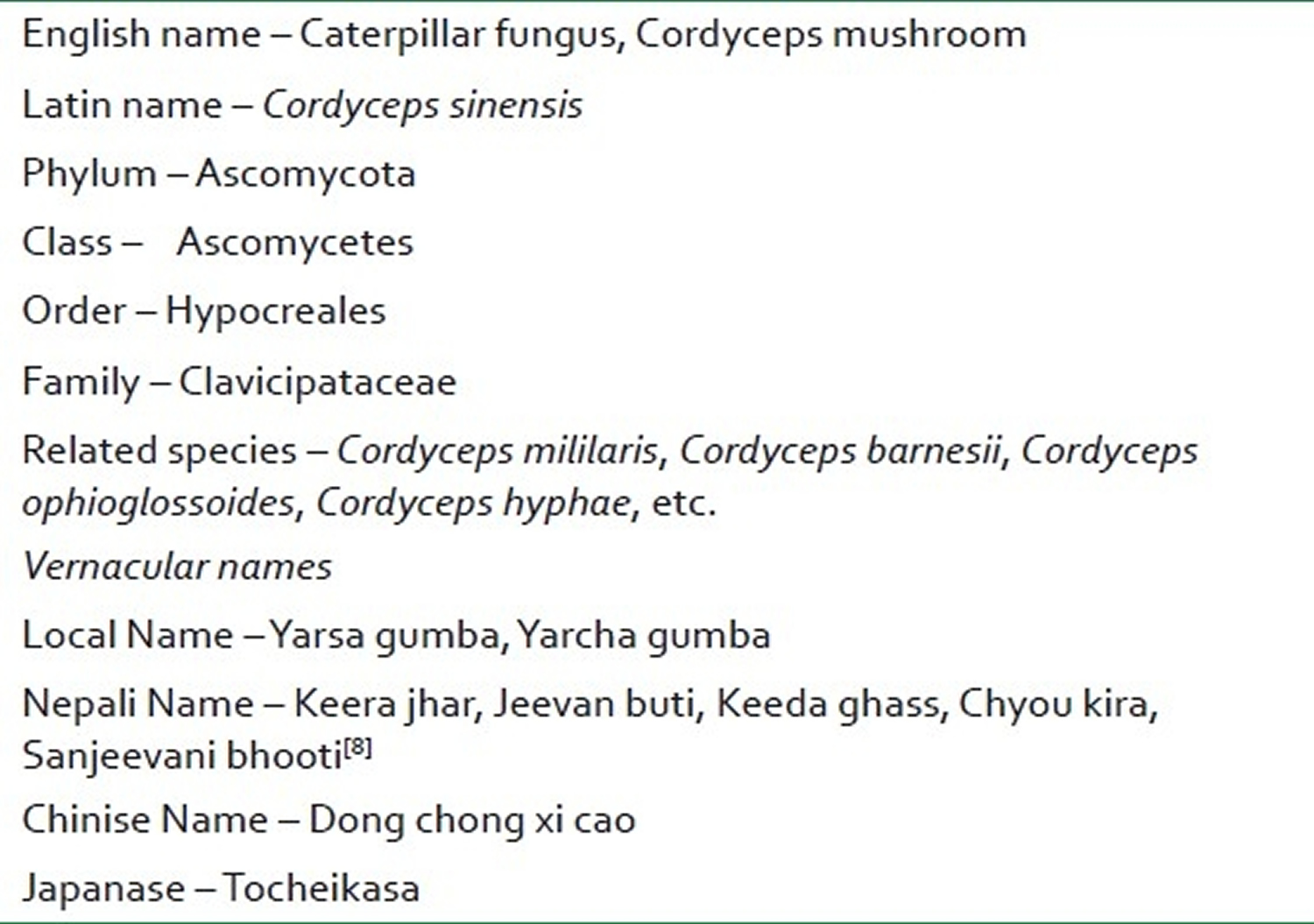 Initially local herders observed that yak, goat, sheep, etc. consuming Cordyceps Sinensis during their grazing in the forest became very strong and stout. This observation paved the way for the discovery of its medicinal value. Thereafter, local people and herders used the fungus powder with jaggery to increase milk production, and improve reproductive capacity and vitality of their cattle. Then its relevant medicinal properties were explored, collecting only the aerial part (fruiting body/stroma), which they dried in sunlight as primary processing. Then they themselves consumed it and became convinced of its medicinal effects in enhancing vigor and vitality. They further claimed that it has aphrodisiac effects, and hence they used to give it as a gift to relatives and friends.

At present, local folk practitioners use the product alone or in combination with other medicinal herbs to treat various diseases, administering different doses for different ailments according to their experience, based on an empirical trial-and-error method. People of both sexes usually take one piece of Cordyceps Sinensis with a cup of milk to enhance their sexual potency and desire. The Bhutia community put one piece of Cordyceps Sinensis in a cup of local-made alcohol (chang), leave it for 1 hour, and drink it morning and evening as a tonic. Some use hot water instead of alcohol. Some folk healers use Cordyceps Sinensis for diabetes and other wasting diseases. It is used for cancer mixed with texus leaf and Ginseng root decoction. Similar reports are also available from Nepal 7), 8). An attempt was made to evaluate the strength of the folk claims by counting the number of users for particular illnesses. Prolonged, continuous use by local folk healers/traditional healers for the treatment of 21 ailments, including cancer, bronchial asthma, bronchitis, tuberculosis, diabetes, cough and cold, erectile dysfunction, benign prostatic hyperplasia, jaundice, alcoholic hepatitis, etc., were noted [Table 2]. Most traditional healers and elderly people use it to increase longevity and cure erectile dysfunction 9). 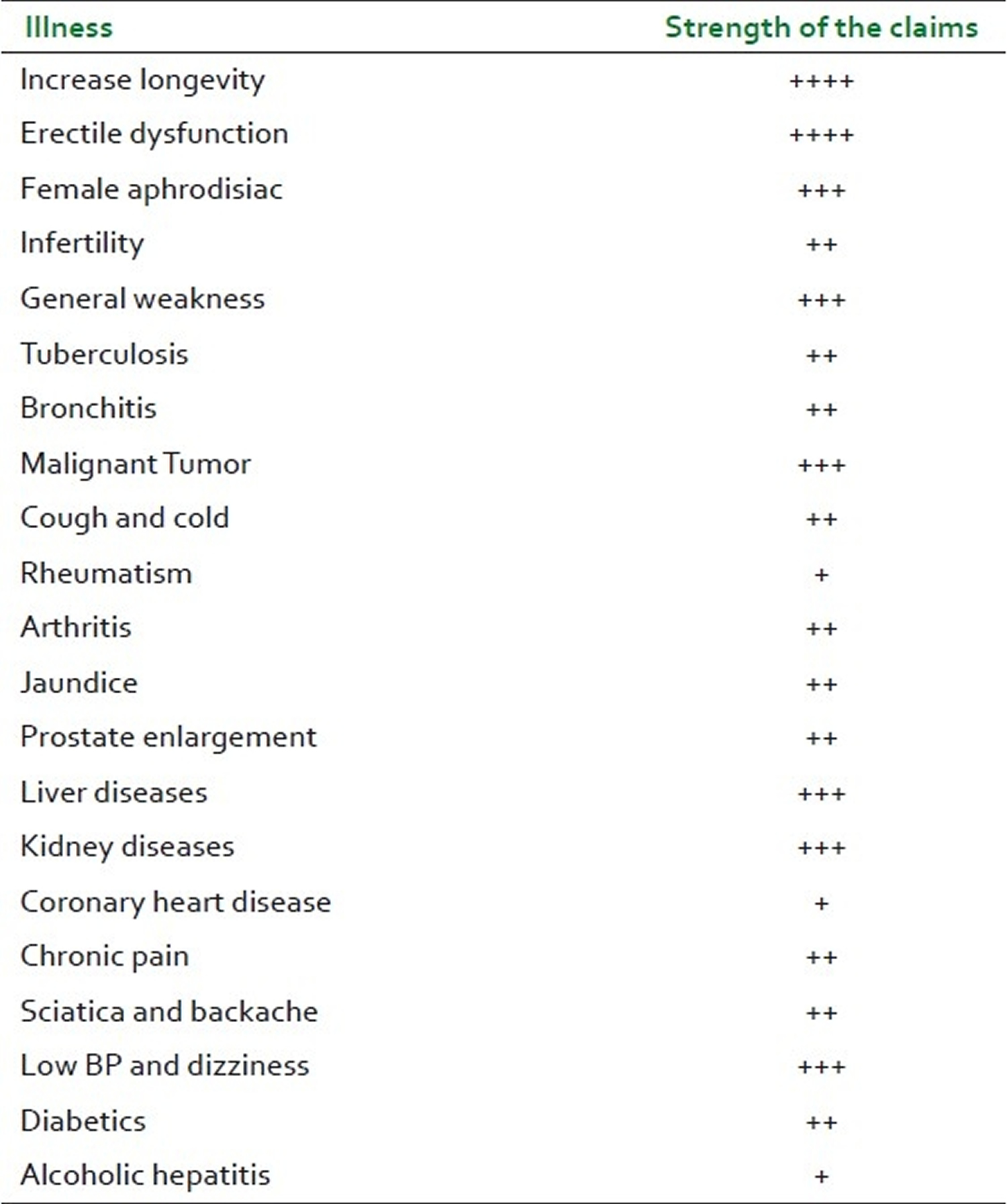 Due to the rarity and outstanding curative effects of Cordyceps sinensis, some natural substitutes such as Cordyceps militaris, Cordyceps liangshanensis, Cordyceps gunnii, and Cordyceps cicadicola have been sold in markets 11). In addition, several cultured mycelia of C. sinensis and C. militaris fungi have become the main substitutes of the natural species as commercial products, and 50 medicines and two dietary supplements related to cultured Cordyceps have been approved by the State Food and Drug Administration of China since 2002 12). For example, JinShuiBao capsule, the commercial product of Cs-4 (Paecilomyces hepialid, a standardized mycelium of C. sinensis), has been used in clinics throughout China. This product generates several million U.S. dollars every year. Synnematum sinensis, Cephalosporium sinensis, Gliocladium roseum, and Mortierella hepialid, the fungus strains isolated from natural Cordyceps sinensis, have also been subjected to large- scale fermentation and are used as commercial products 13). Therefore, much effort has been invested in studying the evaluation of the quality, pharmacological activities, and clinical efficacies of natural and cultured cordyceps. In this chapter, we focus on the bioactivities, action mechanisms, and active ingredients of cordyceps, both natural and cultured.

Cordyceps has a long history of use as a lung and kidney tonic, and for the treatment of chronic bronchitis, asthma, tuberculosis and other diseases of the respiratory system. The cardiovascular effects of Cordyceps are being noticed more frequently by researchers as it works through variety of possible ways either by lowering high blood pressure via direct dilatory effects or mediated through M-cholinergic receptors resulting in improvement in the coronary and cerebral blood circulation 14). Thus, Cordyceps has implications at the therapeutic level as well by rectifying the abnormalities in rhythmic contractions (also known as cardiac arrhythmia). Cordyceps extract has also been found as a promising source to increase cardiac output up to 60 % in augmentation with conventional treatment of chronic heart failure 15). The product from wild type and cultured Cordyceps has also been shown to significantly decrease blood viscosity and fibrinogen levels preventing myocardial infarction 16). Another study showed that the fermentation products of Cs-4 reduce myocardial oxygen consumption in animals under experimental lab conditions revealing dramatic anti-anoxic effects 17). These studies provide strong evidence that Cs-4 and its fermentative solution prevent platelet aggregation stimulated by collagen or adenosine di-phosphate. An intravenous injection of concentrated Cordyceps extract (90 μg/kg per min, i.v.) resulted in 51–71 % reduction in 51Cr-labeled platelet aggregation in the endothelial abdominal aorta in rabbit 18). 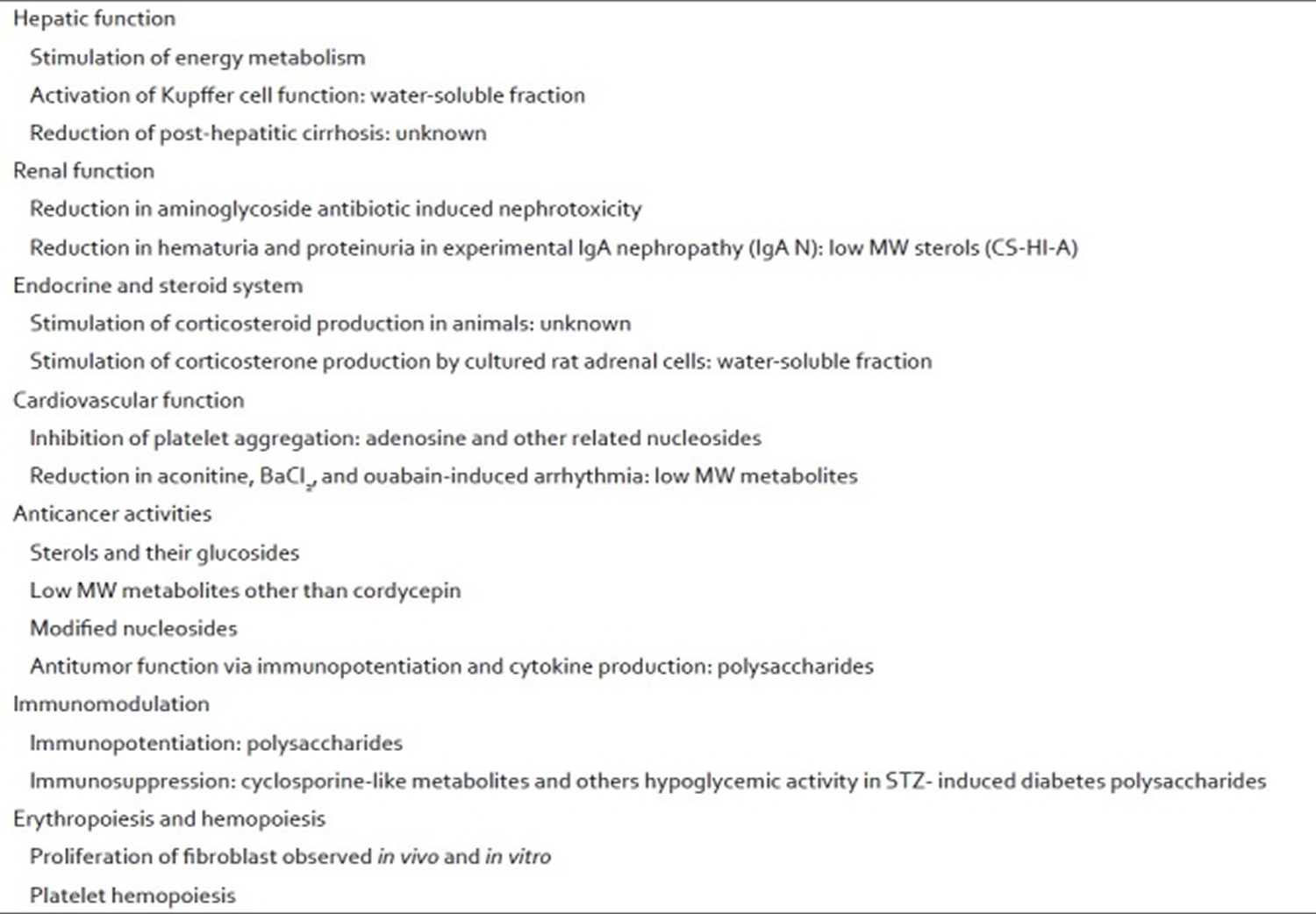 Studies have also shown that cordyceps has antitumor activity in various cancers through several pathways. Both natural and cultured cordyceps have demonstrated antitumor effects 40), 41).

Studies in the laboratory involving animals showed cordyceps had an inhibitory effect on Ehrlich ascites carcinoma and meth-A fibrosarcoma 42), EL-4 lymphoma 43), B16 melanoma 44), Lewis lung carcinoma 45), and H22 tumors 46) in mice. Furthermore, Cordyceps sinensis reversed the suppressive effect of Taxol-induced leukopenia in mice, which indicated that Cordyceps sinensis could be used with other chemotherapy methods for cancer treatment 47). Cordyceps exhibited direct cytotoxic activity against several kinds of tumor cells, including Lewis lung carcinoma, B16 melanoma, lymphocytic (Jurkat), prostate (PC3), breast (MCF7), hepatocellular (HepG2, Hep3B), colorectal (HT-29)and HCT 116), and HL-60 cells 48), 49), 50), 51). Although cordyceps had a cytotoxic effect on tumor cells, it did not show any cytotoxicity against normal cells 52).

Several mechanisms contribute to the antitumor effect of cordyceps, such as direct cytotoxicity, immunopotentiation, apoptosis, selective inhibition of ribonucleic acid (RNA), and protein synthesis, as well as antioxidant, antiangiogenic, antimutagenic, antimetastatic, and antiviral activities 53), 54), 55). Of them, the apoptotic homeostasis regulated by cordyceps might be the most important 56) mechanism. The apoptotic molecular mechanism of cordyceps includes the activation of Bax, caspase-3 and/or -9, -8; inhibition of cyclooxygenase-2 (COX-2); and nuclear factor κB (NF-κB) protein expression and downregulation of Bcl-2 level 57). Besides, apoptosis of MDA-MB-231 human breast carcinoma cells induced by C. militaris aqueous extract (0.8 mg/mL) was also associated with loss of mitochondrial membrane permeability. In addition, the extract decreased Akt activation and reversed PI3K/Akt-pathway-enhanced apoptosis 58). Furthermore, the apoptotic events induced by the extract were also mediated by diminished telomerase activity 59).

Some reports are published on its adverse gastrointestinal behaviors like dry mouth, nausea and diarrhea 60). In some patients, allergic response has been seen during treatment with a strain of Cordyceps, i.e., CS-4 61). Patients, who suffer from autoimmune diseases such as rheumatoid arthritis, systemic lupus erythematosus and multiple sclerosis, are generally suggested to avoid its use. Reports are still lacking on pregnant and lactating women but some animal studies in mice have revealed that Cordyceps have effects on plasma testosterone levels 62), 63). There has been couple of reports on lead poisoning in patients taking Cordyceps herbal medicine for treatment. The lead content in the Cordyceps powder in these cases was significantly high (20,000 ppm) 64). However, the blood lead levels returned to normal upon termination of the product consumption.

Besides few negatively published data, Cordyceps is relatively considered to be a non-toxic medicinal mushroom. Cordyceps dose in patients suffering from long-term renal failure was demonstrated up to 3–6 g/day 65). In clinical studies involving lung cancer, chemotherapy was carried out with the combination of Cordyceps 66). In another clinical trial, results of Cordyceps (3.15 g for 5 weeks) were compared with placebo to evaluate its effects on physical performance 67). In general, researchers demonstrated that 3–4.5 g of Cordyceps/day is sufficient except in patients suffering from severe liver disease 68). However, no human toxicity report was found and even animal models were failed to determine median lethal dose. Cordyceps dosage up to 80 g/kg body weight/day for 7 days was injected intraperitonealy in mice and even then it did not cause any fatality 69). In another study, rabbits fed through mouth for 3 months at a dose of 10 g/kg/day did not show any deviancy in blood reports, or in kidney, liver functioning 70). Even water extract of Cordyceps sinensis was found to be non-toxic on macrophage cells line RAW264.7 proliferation 71). It is suggested that caution should be taken while taking Cordyceps by patients who are undergoing anti-viral or diabetic drug treatments as Cordyceps contains hypoglycemic and anti-viral agents, which can further affect the dosage of these drugs 72).

Cordyceps sinensis is a valued traditional Chinese medicine. Experiments in test tubes and in animals have shown that cordyceps has several bioactivities, such as antitumor, immunomodulatory, antioxidant, sexual and reproductive function enhancement, hypoglycemic, and antifatigue activities, and have a protective effect on the kidney and liver. However for it to be a truly useful for human, Cordyceps need to be studied further in well designed clinical trials.