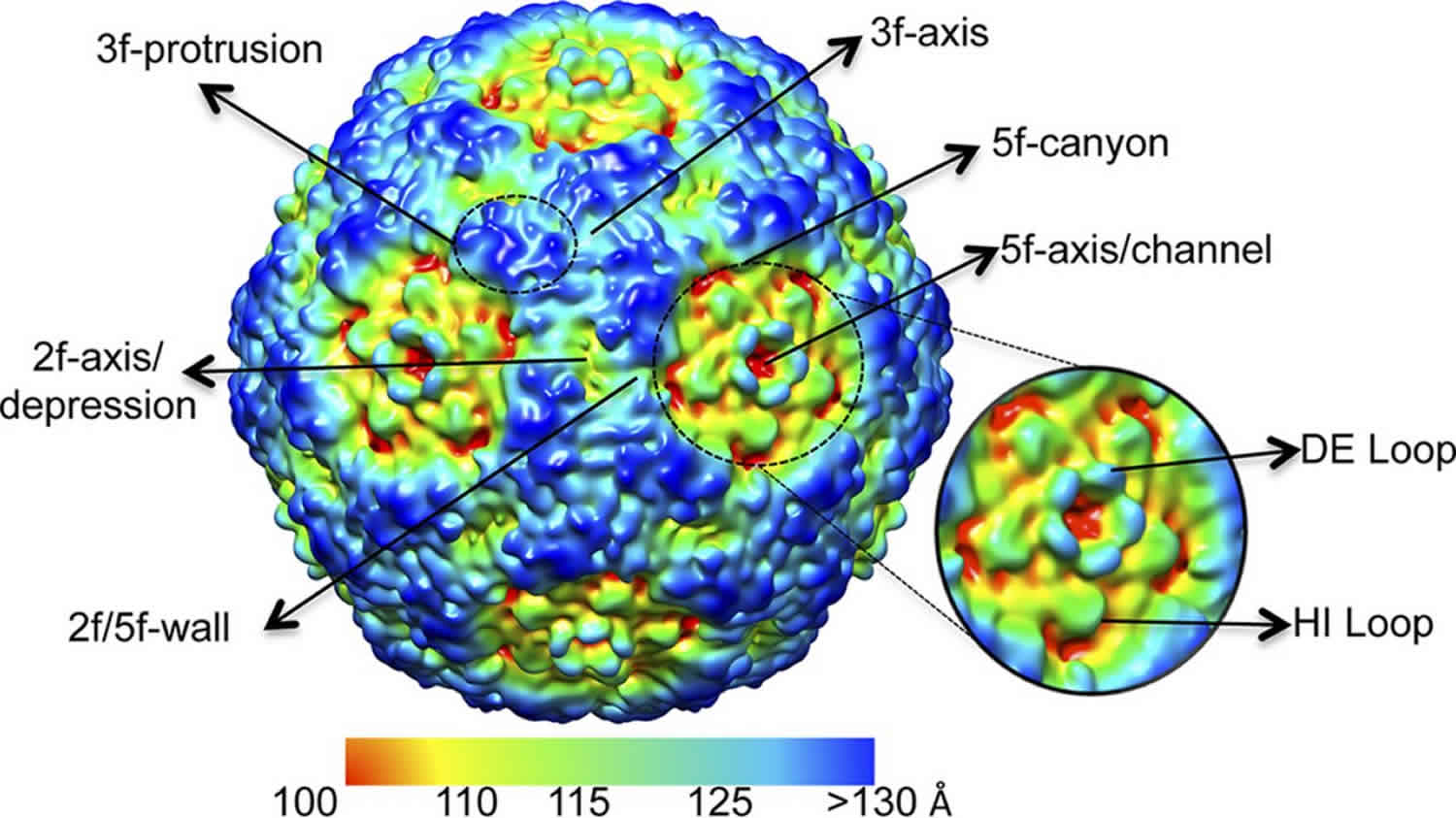 Human bocavirus is a parvovirus that was first identified in 2005 and found worldwide in both respiratory samples, mainly from early life and children of 6 to 24 months of age with acute respiratory infection, and in stool samples, from patients with gastroenteritis 1). The name Bocavirus derives from the combination of the terms bovine parvovirus and canine minute virus and was based on the sequence similarities and genomic organization of these two close relatives 2). Human bocavirus was first identified using a protocol based on DNase treatment, random PCR amplification, high-throughput sequencing and bioinformatics analysis. When this virus-screening technique was initially applied to nasopharyngeal swabs and washings from children with unresolved respiratory tract infections, it gave a positive result rate of 3.1%; hence, it was proposed that human bocavirus is a causative pathogen of respiratory tract diseases 3). Since then, other viruses related to the first human bocavirus-1 (HBoV1) isolate, namely human bocavirus-2 (HBoV2), human bocavirus-3 (HBoV3) and human bocavirus-4 (HBoV4), have been detected principally in human feces and associated with gastroenteritis 4). Despite worldwide occurrence, human bocavirus infection remains poorly understood, and the comprehension of many aspects of these bocaviruses’ biology (i.e., taxonomy, phylogenetic relationships with other viruses, epidemiology, molecular mechanisms of interaction with human cells, association with other pathogens, etc.) is necessary to clarify whether they are harmless passengers or true pathogens.

Human bocaviruses are small non-enveloped single-stranded DNA viruses of about 5300 nucleotides, consisting of three open reading frames encoding the first two the non-structural protein 1 (NS1) and nuclear phosphoprotein (NP1) and the third the viral capsid proteins 1 and 2 (VP1 and VP2) 5). Human bocavirus pathogenicity remains to be fully clarified mainly due to the lack of animal models for the difficulties in replicating the virus in in vitro cell cultures, and the fact that human bocavirus infection is frequently accompanied by at least another viral and/or bacterial respiratory and/or gastroenteric pathogen infection 6), which led to the hypothesis that the human bocavirus may be a harmless passenger rather than a true pathogen 7). Moreover, the virus has been detected in other biological samples, including blood 8), saliva 9), feces 10) and urine 11), as well as environmental samples, including river water 12) and sewage 13). Conversely, recent research has raised concerns over its presence in transfusion medicine 14).

Human bocavirus has been found in individuals of all ages, although it mainly affects infants aged 6-24 months with respiratory symptoms 15). Based upon Koch’s modified postulates, however, the virus cannot yet be confirmed as a causative agent of disease due to the lack of animal models and/or for the difficulties in replicating it in in vitro cultured cells 16). Thus, research and discussion about the potential role of human bocavirus (alone or in combination with other types of viruses) in patients with respiratory infections and gastroenteritis is on going.

Human bocavirus has a worldwide distribution; its transmission and infection occurs throughout the year but is predominant during winter and spring months 17). The worldwide distribution of human bocavirus involves infections of the respiratory tract and gastrointestinal tract (as evidenced in stool samples) of children as well as adults in Europe 18), Asia 19), the Americas 20), Africa 21) and Australia 22).

The average prevalence of human bocavirus in respiratory tract samples ranged from 1.0% to 56.8% and in stool specimens from 1.3% to 63%, depending on the country 24). Furthermore, the worldwide human bocavirus total prevalence estimates in respiratory infections is 6.3% and in gastrointestinal infections is 5.9%. With respect to the respiratory tract infections, prevalence averages < 2% have been reported for Cambodia (1.6%), Kenya (1.8%), Kuwait (1.9%), Senegal (1.0%) and the Philippines (1.0%). In contrast, the highest prevalence averages have been reported for Egypt (56.8%), Hungary (29.8%) and Nicaragua (33.3%) 25).

Based on data available for gastrointestinal infections, countries such as Mexico (1.3%) and Russia (1.4%) have mostly low endemicity levels; conversely, high human bocavirus prevalence has been reported for Bangladesh (63.0%), Nigeria (29.2%) and Tunisia (58.3%) 26).

The rate of co-infections in subjects with respiratory infections and human bocavirus-positivity ranges from 8.3% to 100%; meanwhile, the co-infection ratio is 46.7% relative to the gastrointestinal manifestations 27).

Conversely, the discrepancy observed in human bocavirus-2 seroprevalence (70.5% vs 20.4%) is most likely due to differences in the methods used 35); in fact, while enzyme-linked immunosorbent assay (ELISA) indicate the exposure rate of accumulated infections, PCR results only reveal an on-going infection 36).

Based on the current data, the pathogenic roles of the various human bocavirus genotypes in respiratory tract illness and gastrointestinal infections remain unresolved. It is possible that the virus may be both a passenger and a causative pathogen of acute respiratory tract and gastrointestinal diseases 37). Moreover, the pathogenesis of human bocavirus remains poorly characterized, mainly due to the lack of specific cell lines for virus culture or experimental animal models 38). The first study presenting an in vitro culture system for human bocavirus dates back to 2009, wherein pseudostratified human airway epithelium cells cultured at an air-liquid interface (HAE-ALI), derived from primary human bronchial epithelial cells, was utilized as a tool for human bocavirus replication 39). Attempts had been made previously with other cell lines (HEp-2, Vero, MRC-5, etc.) but were unsuccessful, most likely due to the lack of expression of certain receptor(s) 40), making these cells not susceptible to some respiratory viruses.

Human bocavirus infection can be asymptomatic or can manifest as gastrointestinal or respiratory symptoms. The principal symptoms found included the following 41):

Findings of bocavirus infection are similar to those of a typical viral respiratory illness or atypical pneumonia, including the following:

In patients with acute bocavirus-associated gastroenteritis, findings may include the following:

Symptoms of bocavirus infection in adults mimic those of atypical pneumonia, bronchitis, or acute exacerbations of chronic bronchitis in the respiratory tract and those of other causes of acute gastroenteritis in the gastrointestinal tract.

Human bocavirus is an emerging human parvovirus, and the full spectrum of disease associated with the virus remains to be seen.

For many years, the diagnostic tools available for identification of the etiological agents associated with respiratory and gastroenteric diseases have been limited. At first, the main method to detect human bocavirus infections in respiratory and gastrointestinal samples was represented by a direct tool, namely conventional PCR, which was followed by nested and real-time PCR (rt-PCR).

PCR techniques enable isolation of viral genome fragments from nasopharyngeal aspirates, broncho-alveolar, stool, serum and urine specimens through amplification of NP1, NS1 or/and the VP1/2 gene regions 43), or via other nucleic acid-based detection human bocavirus diagnosis methods 44). NP1 and NS1 are more conserved than VP1/2, and thus are commonly targeted for PCR-based detection of the human bocavirus 45). Real-time PCR has an advantage over conventional PCR, being more specific and rapid, but its requirement for higher-cost oligoprobes is limiting 46).

Application of rt-PCR to NP1 and VP1 genes for the detection of human bocavirus in swabs, fecal and whole blood samples allowed Tozer et al  47) to achieve clinical sensitivity of 100% and clinical specificity of 94% and 93% respectively for the NP1 and VP1 assays. Subsequently, multiplexing assays were developed to detect human bocavirus genotypes in respiratory infections; these included the commercially available Luminex RVP (Luminex Molecular Diagnostics, Toronto, Canada) and RespiFinder (Pathofinder, Maastricht, the Netherlands) 48). More recently, sequence-independent amplification techniques combined with next-generation sequencing platforms have been introduced, promising rapid and simultaneous detection of numerous pathogens. Despite their current drawbacks (i.e., high cost, labour intensity, long turnaround time, specific training of personnel, etc.), as opposed to rt-PCR, these new approaches can provide more information regarding virus species/type; hence, they are of interest for virus diagnosis in clinical and public health settings 49).

Serological methods have been developed for the estimation of human bocavirus-specific antibodies in serum samples; western blotting and immunofluorescence are among those 50). ELISA and enzyme immunoassay (EIA) are reliable qualitative and quantitative serologic assays used to detect IgG and IgM antibodies and IgG affinity 51) using recombinant VP2 or VLP capsid proteins 52); the latter, for example, is produced by an insect cell line infected with a baculovirus vector and subsequently used to produce rabbit anti-human bocavirus antisera that is applied to develop an ELISA test 53). The IgG avidity test allows distinguishment between primary and secondary infections or immune-activations with high diagnostic specificity 54). Recent data have indicated that children with pre-existing human bocavirus-2 immunity show cross-reactivity with human bocavirus1, which presents a paradigm of the hypothesized Original Antigenic Sin phenomenon 55). The few available serological studies to date have mainly addressed epidemiologic issues 56); however, considering that human bocaviruses are highly prevalent agents that can establish persistent infections, interpretation of the serological tests in the context of the clinical situation may be just as complicated as using the PCR results 57).

Notably, Zaghloul 58) determined the presence of human bocavirus in children via qualitative PCR detection of nasopharyngeal aspirates and ELISA estimation of IgM antibodies in serum. Both assays were highly sensitive and specific; however, the ELISA had lower sensitivity than the PCR (81.8% vs 100%) but higher specificity (100% vs 78%).

As in other viral respiratory tract infections, supportive therapy remains the mainstay of treatment for human bocavirus infection 59). Consultation with an infectious disease specialist and/or pulmonologist may be helpful.

There are no specific antiviral medications for human bocavirus infection.

Bronchodilators may be of minimal benefit.