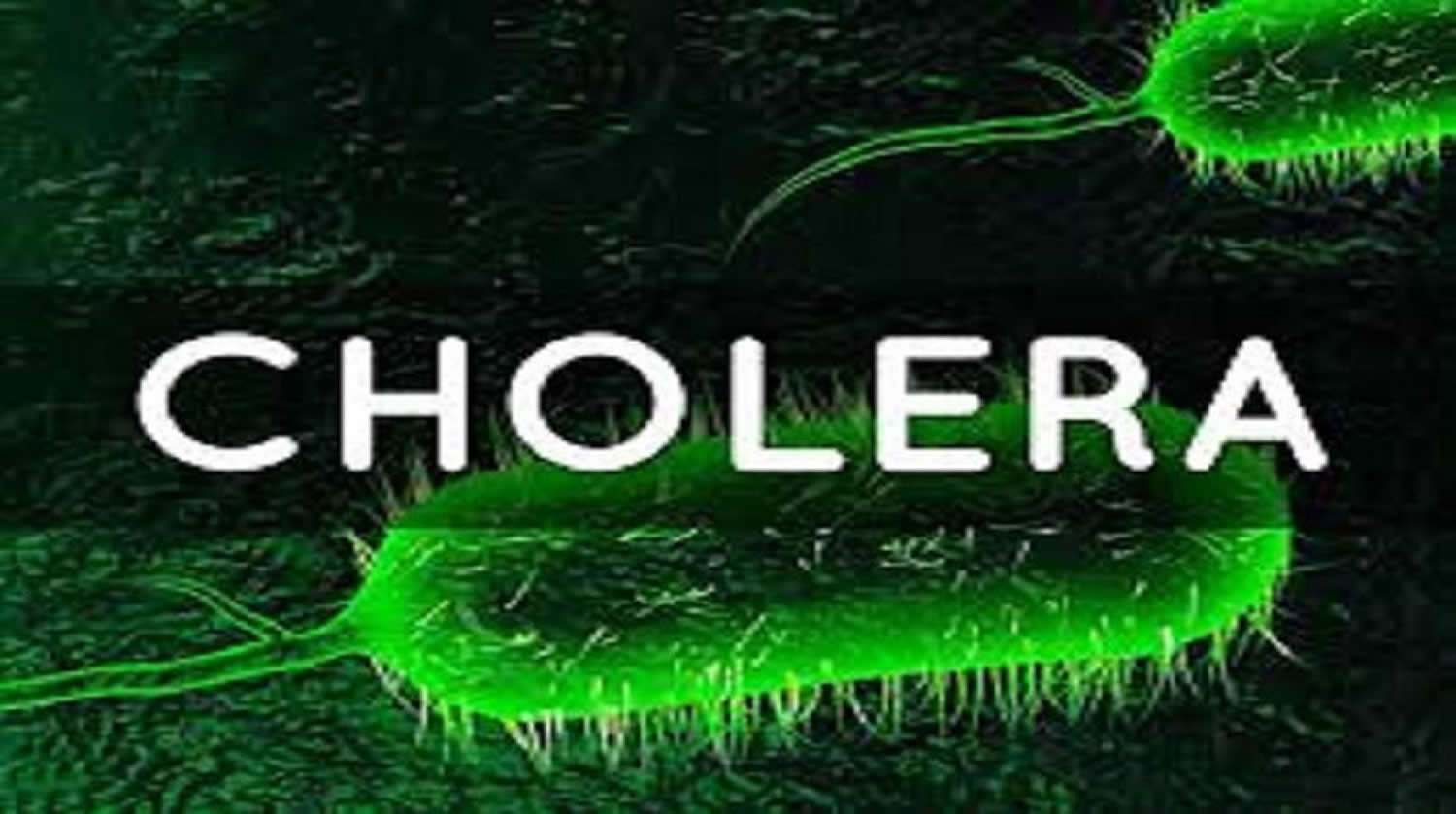 Cholera is an acute, diarrheal illness caused by infection of the intestine with the bacterium Vibrio cholerae (see Figure 1) caused by consuming contaminated food or water. Cholera is rare in the United States and other industrialized nations. However, globally, cholera cases have increased steadily since 2005 and the disease still occurs in many places including Africa, Southeast Asia, and Haiti (see Figure 2). Cholera can be life-threatening but it is easily prevented and treated.

The Centers for Disease Control and Prevention estimated 3 to 5 million cases and over 100,000 deaths occur each year around the world 1). The World Health Organization (WHO) estimates that 100,000 to 200,000 deaths due to cholera occur annually 2). Cholera infection is often mild or without symptoms, but can sometimes be severe. Approximately one in 10 (5-10%) infected persons will have severe disease characterized by profuse watery diarrhea, vomiting, and leg cramps. In these people, rapid loss of body fluids leads to dehydration and shock. Without treatment, death can occur within hours. 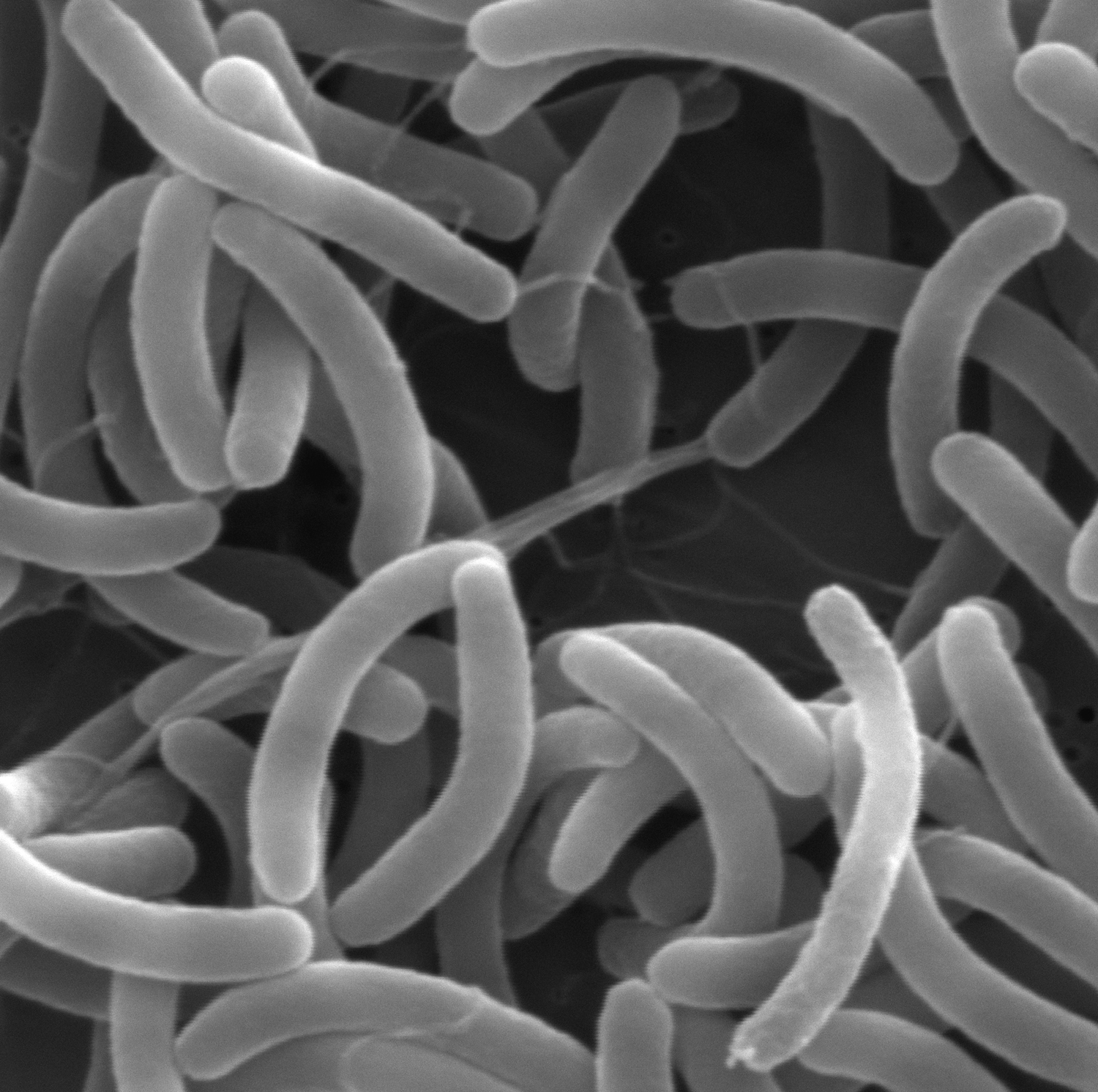 Where is cholera found?

The cholera bacterium is usually found in water or food sources that have been contaminated by feces (poop) from a person infected with cholera. Cholera is most likely to be found and spread in places with inadequate water treatment, poor sanitation, and inadequate hygiene.

The cholera bacterium may also live in the environment in brackish rivers and coastal waters. Shellfish eaten raw have been a source of cholera, and a few persons in the U.S. have contracted cholera after eating raw or undercooked shellfish from the Gulf of Mexico.

Travelers should be aware of areas with high rates of cholera, know how the disease spreads, and what to do to prevent it. 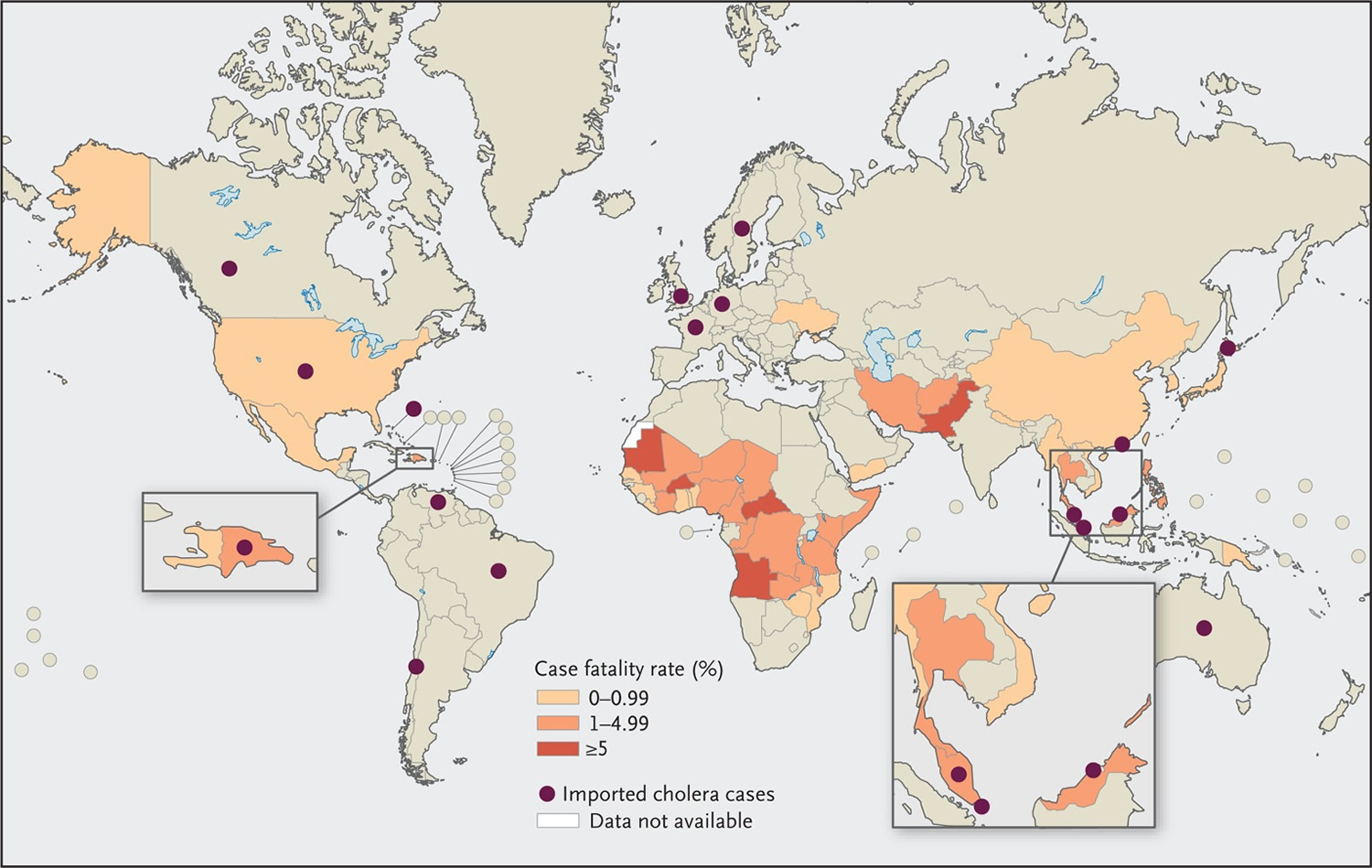 How does a person get cholera?

A person can get cholera by drinking water or eating food contaminated with the cholera bacterium. In an epidemic, the source of the contamination is usually the feces of an infected person that contaminates water and/or food. The disease can spread rapidly in areas with inadequate treatment of sewage and drinking water. The disease is not likely to spread directly from one person to another; therefore, casual contact with an infected person is not a risk for becoming ill.

Cholera is not likely to spread directly from one person to another; therefore, casual contact with an infected person is not a risk for becoming ill.

You need more than a million cholera bacteria — approximately the amount you’d find in a glass of contaminated water — to cause illness, therefore cholera usually isn’t transmitted through casual person-to-person contact.

Who is most likely to get cholera?

Individuals living in places with inadequate water treatment, poor sanitation, and inadequate hygiene are at a greater risk for cholera.

A bacterium called Vibrio cholerae causes cholera infection. However, the deadly effects of the disease are the result of a potent toxin called CTX that the bacterium produce in the small intestine. CTX binds to the intestinal walls, where it interferes with the normal flow of sodium and chloride. This causes the body to secrete enormous amounts of water, leading to diarrhea and a rapid loss of fluids and salts (electrolytes).

Contaminated water supplies are the main source of cholera infection, although raw shellfish, uncooked fruits and vegetables, and other foods also can harbor V. cholerae.

Cholera bacteria have two distinct life cycles — one in the environment and one in humans.

Cholera bacteria in the environment

Cholera bacteria occur naturally in coastal waters, where they attach to tiny crustaceans called copepods. The cholera bacteria travel with their hosts, spreading worldwide as the crustaceans follow their food source — certain types of algae and plankton that grow explosively when water temperatures rise. Algae growth is further fueled by the urea found in sewage and in agricultural runoff.

When humans ingest cholera bacteria, they may not become sick themselves, but they still pass the bacteria in their stool. When human feces contaminate food and water supplies, both can serve as ideal breeding grounds for the cholera bacteria.

Because more than a million cholera bacteria — approximately the amount you’d find in a glass of contaminated water — are needed to cause illness, cholera usually isn’t transmitted through casual person-to-person contact.

The most common sources of cholera infection are standing water and certain types of food, including seafood, raw fruits and vegetables, and grains.

Everyone is susceptible to cholera, with the exception of infants who derive immunity from nursing mothers who have previously had cholera. Still, certain factors can make you more vulnerable to the disease or more likely to experience severe signs and symptoms. Risk factors for cholera include:

The risk for cholera is very low for people visiting areas with epidemic cholera. When simple precautions are observed, contracting the disease is unlikely.

All people (visitors or residents) in areas where cholera is occurring or has occurred should observe the following recommendations:

All people (visitors or residents) in areas where cholera is occurring or has occurred should be aware of the basic cholera facts and follow these five basic cholera prevention steps to protect themselves and their family 4).

1. Drink and use safe water*

To be sure water is safe to drink and use:

*Piped water sources, drinks sold in cups or bags, or ice may not be safe and should be boiled or treated with chlorine.

2. Wash your hands often with soap and safe water*

* If no soap is available, scrub hands often with ash or sand and rinse with safe water.

3. Use latrines or bury your feces (poop); do not defecate in any body of water

What if you don’t have a latrine or chemical toilet?

*Avoid raw foods other than fruits and vegetables you have peeled yourself.

5. Clean up safely—in the kitchen and in places where the family bathes and washes clothes

Wash yourself, your children, diapers, and clothes, 30 meters (98 feet) away from drinking water sources.

Vaxchora is a live, weakened vaccine that is taken as a single, oral liquid dose of approximately three fluid ounces at least 10 days before travel to a cholera-affected area.

Vaxchora’s efficacy was demonstrated in a randomized, placebo-controlled human challenge study of 197 U.S. volunteers from 18 through 45 years of age. Of the 197 volunteers, 68 Vaxchora recipients and 66 placebo recipients were challenged by oral ingestion of Vibrio cholerae, the bacterium that causes cholera. Vaxchora efficacy was 90 percent among those challenged 10 days after vaccination and 80 percent among those challenged three months after vaccination. The study included provisions for administration of antibiotics and fluid replacement in symptomatic participants. To prevent transmission of cholera into the community, the study included provisions for administration of antibiotics to participants not developing symptoms.

Two placebo-controlled studies to assess the immune system’s response to the cholera vaccine were also conducted in the U.S. and Australia in adults 18 through 64 years of age. In the 18 through 45 year age group, 93 percent of Vaxchora recipients produced antibodies indicative of protection against cholera. In the 46 through 64 years age group, 90 percent produced antibodies indicative of protection against cholera. The effectiveness of Vaxchora has not been established in persons living in cholera-affected areas.

The safety of Vaxchora was evaluated in adults 18 through 64 years of age in four randomized, placebo-controlled, multicenter clinical trials; 3,235 study participants received Vaxchora and 562 received a placebo. The most common adverse reactions reported by Vaxchora recipients were tiredness, headache, abdominal pain, nausea/vomiting, lack of appetite and diarrhea.

The Advisory Committee on Immunization Practices 6) voted to approve the cholera vaccine for adults 18 – 64 years old who are traveling to an area of active cholera transmission.

Two other oral inactivated, or non-live cholera vaccines, Dukoral® and ShanChol®, are World Health Organization 7) prequalified, but these vaccines are not available in the U.S. No cholera vaccine is 100% protective and vaccination against cholera is not a substitute for standard prevention and control measures.

Most people exposed to the cholera bacterium (Vibrio cholerae) don’t become ill and never know they’ve been infected. Yet because they shed cholera bacteria in their stool for seven to 14 days, they can still infect others through contaminated water. Most symptomatic cases of cholera cause mild or moderate diarrhea that’s often hard to distinguish from diarrhea caused by other problems.

Only about 1 in 10 infected people develops more-serious signs and symptoms of cholera, usually within a few days of infection. Symptoms typically appear in 2-3 days. It can take anywhere from a few hours to 5 days for symptoms to appear after infection.

Approximately one in ten (5-10%) infected persons will have severe disease characterized by profuse watery diarrhea, vomiting, and leg cramps. In these people, rapid loss of body fluids leads to dehydration and shock. Without treatment, death can occur within hours.

Symptoms of cholera infection may include:

Signs and symptoms of cholera dehydration include irritability, lethargy, sunken eyes, a dry mouth, extreme thirst, dry and shriveled skin that’s slow to bounce back when pinched into a fold, little or no urine output, low blood pressure, and an irregular heartbeat (arrhythmia).

Dehydration may lead to a rapid loss of minerals in your blood (electrolytes) that maintain the balance of fluids in your body. This is called an electrolyte imbalance.

An electrolyte imbalance can lead to serious signs and symptoms such as:

Signs and symptoms of cholera in children

In general, children with cholera have the same signs and symptoms adults do, but they are particularly susceptible to low blood sugar (hypoglycemia) due to fluid loss, which may cause:

The risk of cholera is slight in industrialized nations, and even in endemic areas you’re not likely to become infected if you follow food safety recommendations. Still, sporadic cases of cholera occur throughout the world. If you develop severe diarrhea after visiting an area with active cholera, see your doctor.

If you have diarrhea, especially severe diarrhea, and think you may have been exposed to cholera, seek treatment right away. Severe dehydration is a medical emergency that requires immediate care regardless of the cause.

Cholera can quickly become fatal. In the most severe cases, the rapid loss of large amounts of fluids and electrolytes can lead to death within two to three hours. In less extreme situations, people who don’t receive treatment may die of dehydration and shock hours to days after cholera symptoms first appear.

Although shock and severe dehydration are the most devastating complications of cholera, other problems can occur, such as:

Although signs and symptoms of severe cholera may be unmistakable in endemic areas, the only way to confirm a diagnosis is to identify the bacteria in a stool sample.

Cholera can be simply and successfully treated by immediate replacement of the fluid and salts lost through diarrhea. Patients can be treated with oral rehydration solution, a prepackaged mixture of sugar and salts to be mixed with water and drunk in large amounts. This solution is used throughout the world to treat diarrhea. Severe cases also require intravenous fluid replacement. With prompt rehydration, fewer than 1% of cholera patients die.

If you think you or a member of your family may have cholera, seek medical attention immediately – severely dehydrated people may also need intravenous (IV) fluids. Dehydration can be rapid so fluid replacement is essential. If you have oral rehydration solution (ORS), the ill person should start taking it now; it can save a life. He or she should continue to drink oral rehydration solution at home and during travel to get treatment. If you have an infant who has watery diarrhea, continue to breastfeed.

Antibiotics shorten the course and diminish the severity of the illness, but they are not as important as receiving rehydration. Persons who develop severe diarrhea and vomiting in countries where cholera occurs should seek medical attention promptly.

Zinc supplements. Research has shown that zinc may decrease and shorten the duration of diarrhea in children with cholera.