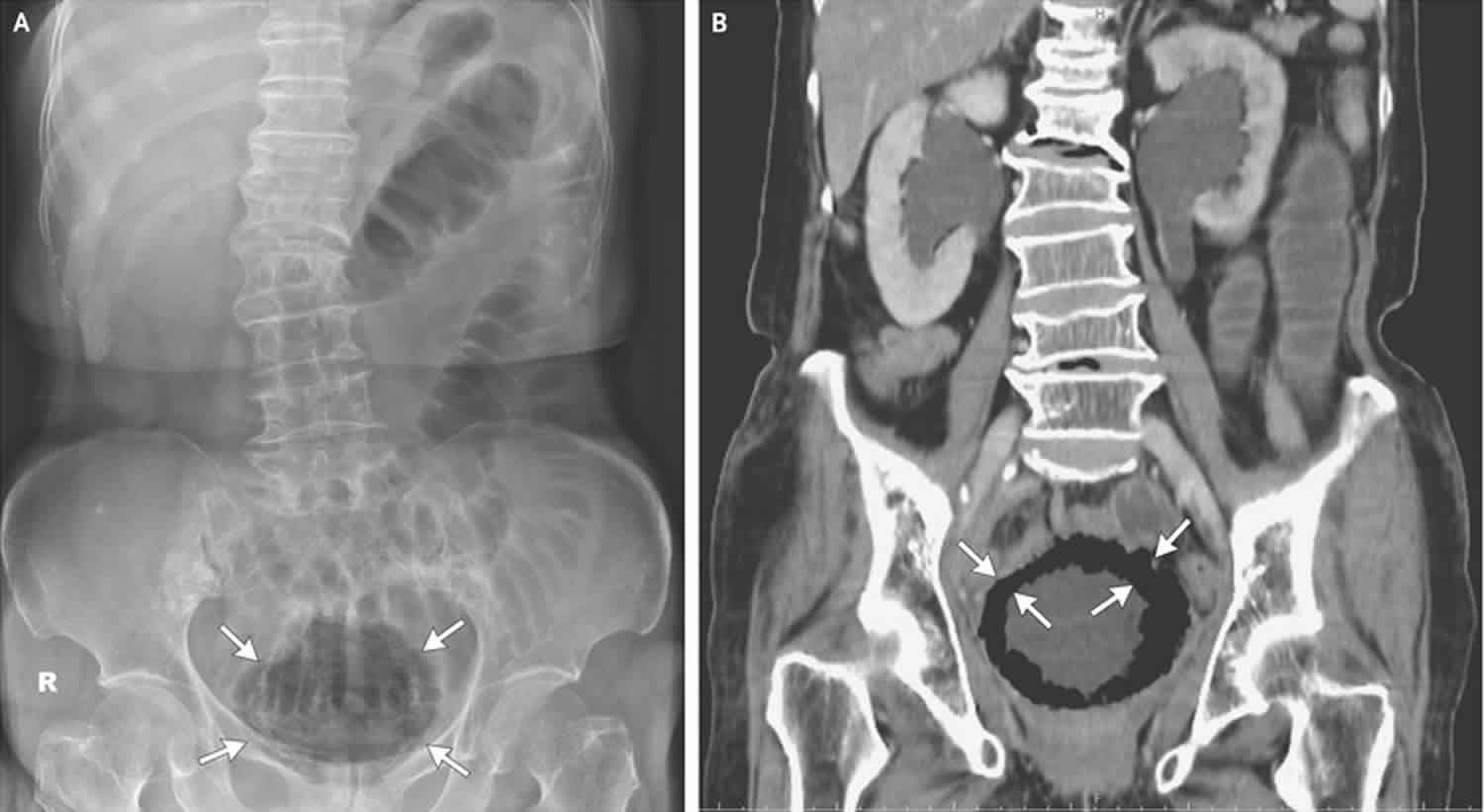 The exact mechanism of pneumaturia (air in urine) is still unclear and not fully understood. However, in diabetic patients, as well as in case of primary renal glycosuria, it has been suggested that carbon may be produced through fermentation by the pathogens, whenever glucose concentrations are high. Since the infection also affects nondiabetics, it is thought that tissue proteins and urinary lactulose can also serve as substrates 7). On the other hand, the occurrence of gas formation only in some patients with a UTI could be explained by survival mechanisms of bacteria in patients with certain comorbidities associated with emphysematous cystitis or by the presence of specific virulence factors in some uropathogenic bacteria 8). Impaired gas transport due to local inflammation or obstructive processes (which increase intracellular pressure while simultaneously decreasing circulation) may also increase gas accumulation within the tissues and the risk of pneumaturia 9). The release of bacterial endotoxins in complicated UTIs may contribute to the inflammatory process and may induce urinary tract paralysis and urinary stasis 10).

Other potential risk factors identified include vesicoureteral reflux, bladder trigone diverticulum and long-term administration of steroids 11). With regard to prolonged glucocorticoid administration, impairment of host defense mechanisms is probably one the most important factor disposing the patient to recurrent complicated UTI 12), assuming that an immunosuppressive therapy (for example, with steroids but even with chemotherapeutic drugs) is a potential risk factor for developing recurrent UTI and emphysematous cystitis.

In humans, cases of emphysematous cystitis are reported approximately twice as often in women as in men; in general, middle-aged, diabetic women appear to be at a significantly higher risk for disease 13).

No studies were focused on the prevalence of emphysematous cystitis, as it may be difficult to evaluate due to its underestimation; even so, emphysematous cystitis is most frequently associated with diabetic patients. Despite that, in two retrospective studies made on a quite numerous sample, diabetes mellitus was present in 26%, while patients with neurologic diseases 18, 4%, impaired immune system 3%, different forms of complicated or recurrent UTI (8%) and other underlying disease were more represented than it usually appears 14).

Risk factors for emphysematous cystitis include:

Clinical presentation of emphysematous cystitis is variable. Seven per cent of cases of emphysematous cystitis are asymptomatic while classic symptoms of urinary tract infections are seen in about 50% 23). Emphysematous cystitis clinical symptoms may present similar to uncomplicated cystitis, which is characterized by nonspecific UTI signs such as hematuria, dysuria, stranguria or pollakiuria, abdominal pain, and urinary urgency and increased urinary frequency 24). In some cases, pneumaturia is present and could represent a more specific clinical sign, but it is often not recognized or not noted; in humans, it is observed in 70% of patients with bladder catheterization 25). Fever has been reported as a common feature in humans, even without emphysematous pyelonephritis 26).

Urinalysis and aerobic and anaerobic urine culture should be performed routinely and are recommended as a starting point of the diagnostic process if any form of UTI is suspected 29). Antibiogram should then be performed, in order to implement effective antibiotic therapy. In the reported cases of emphysematous cystitis in veterinary medicine, cultures have been achieved from samples collected via cystocentesis, sterile catheterization or, in few cases, by mid-stream voiding 30). Cystocentesis is a simple but invasive form of paracentesis used to obtain sterile urine samples; it has been reported that in some cases, a few bubbles of air entrapped in the wall bladder can be detected after this procedure 31). Therefore, both cystocentesis and catheterization can be considered as procedures that could introduce air in the bladder lumen or wall and should be performed only after any diagnostic imaging evaluation.

Finally, evaluation of complete blood count (CBC) and serum biochemistry panels should be performed, although there are no specific data suggesting the presence of emphysematous cystitis. CBC is advised to evaluate the presence of systemic or local inflammation 33) and together with serum biochemical profiles, it should be estimated to detect the eventual underlying condition, such as endocrine or renal diseases. In human medicine, it has been reported that 50% of patients with emphysematous cystitis have bacteremia, advising blood culture as an additional laboratory test 34). Fever has been reported as a common feature in humans, even without emphysematous pyelonephritis 35).

Complications of emphysematous cystitis include ureteric and renal parenchymal extension, rupture of bladder and overwhelming sepsis 36).

Diagnostic imaging techniques are necessary for the diagnosis of emphysematous cystitis, which is based on detection of an inflammatory disease of the bladder with gas accumulation in the lumen and/or in the wall of the urinary bladder by radiography, ultrasonography and/or CT in humans and dogs. emphysematous cystitis is a cause of pneumaturia. Gas in the urinary tract may also be iatrogenically introduced or may be secondary to a fistulous connection with the intestine or genital tract 37).

Although diagnostic imaging is not recommended for uncomplicated UTI diagnosis, it may be considered as a useful tool to better characterize the lesions and eventually rule out emphysematous cystitis especially in recurrent or complicated UTI, in particular in those cases where emphysematous cystitis risk factors are present, and where the urine culture is positive 38).

Iatrogenic causes such as procedures that could introduce air into the bladder (eg, catheterization, cystocentesis, cystoscopy, urological surgery) and anatomic conditions (such as fistulas between the vagina/bowel and urinary bladder) must first be ruled out 39).

Plain conventional abdominal radiography is the most common imaging method for emphysematous cystitis detection both in humans and in dogs 40). Plain radiography shows a radiolucent line of gas around the bladder wall, separated from the more dorsal rectal gas. The presence of air in the bladder wall is characterized by a cobblestoned or “beaded necklace” appearance, reflecting irregular thickening of the nondependent mucosal surface due to submucosal blebs. Three radiographic stages of emphysematous cystitis have been described in human patients.20 In stage one, a clear 1-mm zone may be seen around the contrast medium and free gas is not present in the bladder lumen. In stage two, the bladder wall is irregular and thickened because of increased intramural gas, and there is still no free intraluminal gas. In stage three, free gas in the bladder lumen is evident radiographically. Gas accumulation in the urinary tract can be difficult to differentiate from air in overlying loops of bowel by plain radiography, an explanation to its low sensitivity reported in the human literature (33%) 41).

In humans, CT is the recommended imaging modality of choice for diagnosis, monitoring and prognosis of emphysematous cystitis and emphysematous UTIs in general, having a reported sensitivity and specificity as high as 100% 42). CT can better define the extent and severity of disease and detect mild cases as well as rule out other causes of urinary gas such as vesicocolic fistulas 43). Although the use of CT for diagnosis of emphysematous cystitis or emphysematous pyelonephritis has not been described thoroughly in the veterinary literature 44), a CT scan of the abdomen should be considered as a useful tool to reveal the presence of gas bubbles in the renal parenchyma and in the upper urinary tract in dogs as in humans. Even so, the risks associated with general anesthesia or sedation in debilitated patients should be carefully evaluated 45).

Moreover, if the patient is emaciated, radiography may not provide adequate morphologic information on the kidneys, making the detection of an emphysematous upper UTI difficult to achieve 46).

For these reasons, some authors have suggested the superiority of ultrasonography to radiography for the detection of emphysematous changes particularly at an early stage and when only a small amount of gas is present 47).

Ultrasonographic findings of mural emphysematous cystitis include a hyperechoic stripe with reverberation artifact in the superficial bladder wall, while accumulation of gas immediately deep to the superficial urinary bladder mucosa with characteristic reverberation/ring down artifact is seen with luminal emphysematous cystitis. Scanning the patient in both recumbent and standing positions can help to differentiate movable, gravity-dependent calculi and hematomas from adherent mass lesions or to differentiate free gas in the bladder lumen from intramural gas 48).

Finally, cystoscopy could be evaluated as a different imaging modality for detection of emphysematous cystitis; in human medicine, this examination is indicated as useful in revealing the presence of bladder outlet obstruction,1 but some authors report that it is not essential for diagnosis 49).

Antibiotic administration is the medical therapy of choice for emphysematous cystitis, adjusted to the results of urine and/or blood cultures. In humans, medical therapy consists of antibiotics, bladder drainage by catheterization and treatment of predisposing conditions 50). Establishing glycemic control in diabetic patients is of significant importance, as many of the reported cases in literature involve poorly controlled diabetes.

Ideally, emphysematous cystitis treatment should be based on bactericidal and lipid soluble drugs, which should reach high concentrations both in urine and in tissue, as infection may extend beyond the urothelium 51). In the context of increasing antimicrobial resistance worldwide, Escherichia coli is one of the microorganisms to be monitored because of its frequent acquisition of antibiotic resistance mechanisms, including toward those antibiotics used as first-line treatment such as trimethoprim-sulfamethoxazole or β-lactams. Therefore, urine culture and antibiogram should be performed also during treatment, preferably 7 days after starting antibiotic therapy and 1 week after completing it 52).

The duration of the medical treatment is unclear. Generally, treatment of complicated UTI is for 4 weeks 53).

A good prognosis could be achieved only through an early diagnosis of emphysematous cystitis, followed by a prompt medical management.