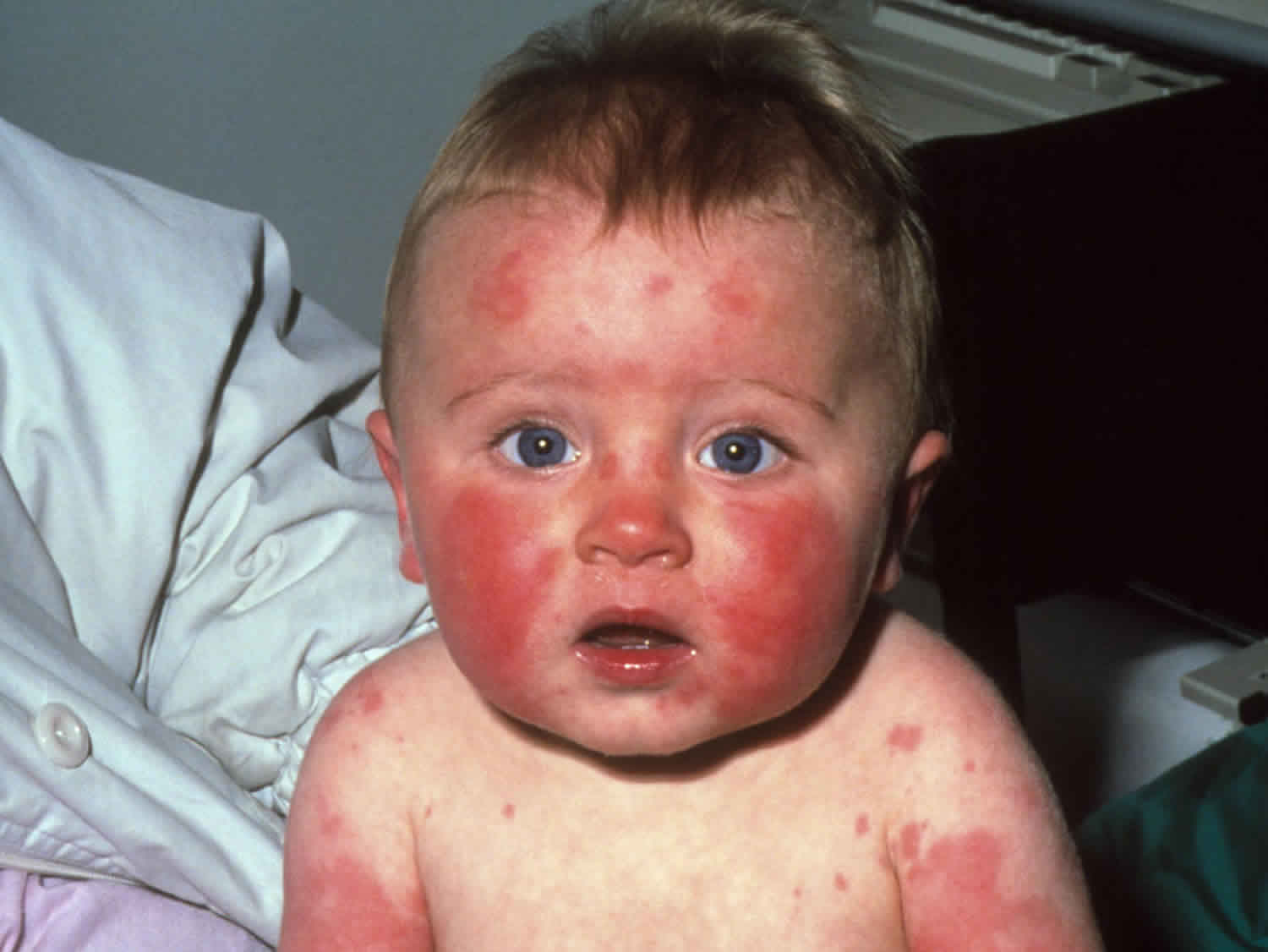 Erythema infectiosum also called Fifth disease or slapped-cheek disease, is a common viral infection in young children due to infection with Parvovirus B19. The parvovirus B19 only infects humans; it’s not the same parvovirus that dogs and cats can get 1). Fifth disease mostly affects children. Erythema infectiosum more commonly occurs in school-age children who are 5 to 15 years old. A person usually gets sick with Fifth disease within 14 days after getting infected with parvovirus B19. Symptoms can include a low fever, cold symptoms, and a headache. Then you get a red rash on your face. It looks like a “slapped cheek.” The rash can spread to the arms, legs, and trunk. Adults who get it might also have joint pain and swelling (arthritis).

Erythema infectiosum or Fifth disease is commonly seen in the spring months of the year 2). The illness lasts approximately 5 days, but the rash may keep coming back for a few weeks, particularly with exercise, heat, fever, or stress. If a pregnant woman becomes infected, the infection can be harmful to the unborn baby.

Fifth disease spreads easily, through saliva and mucus. You can get it when an infected person coughs or sneezes. Frequently washing your hands might help prevent getting the virus. Most people become immune to the virus after having it once.

If your child has erythema infectiosum or Fifth disease, it is not necessary to keep him or her away from other people because the infection is contagious before the rash appears, not after.

Notify any pregnant women who have been around your child that they have been exposed so they can notify their doctor. Mothers in their second trimester of pregnancy are at greatest risk of developing complications from parvovirus B19, but cases have been reported at all points of pregnancy. Any pregnant woman who may have been exposed to parvovirus B19 should contact their obstetrician or healthcare provider as soon as possible.

Patients with sickle-cell or other chronic hemolytic diseases can be more severely affected than other populations 3). Infection by parvovirus B19 destroys reticulocytes. This causes a decrease or transient halt in erythropoiesis. Such individuals can develop an aplastic crisis and lead to severe anemia. Often, these patients will be much more ill-appearing with fevers, malaise, and lethargy. Patients with aplastic crisis will have pallor, tachycardia, and tachypnea from the severe anemia.

You may give your child acetaminophen (Tylenol) or ibuprofen for fever or joint pain as needed. 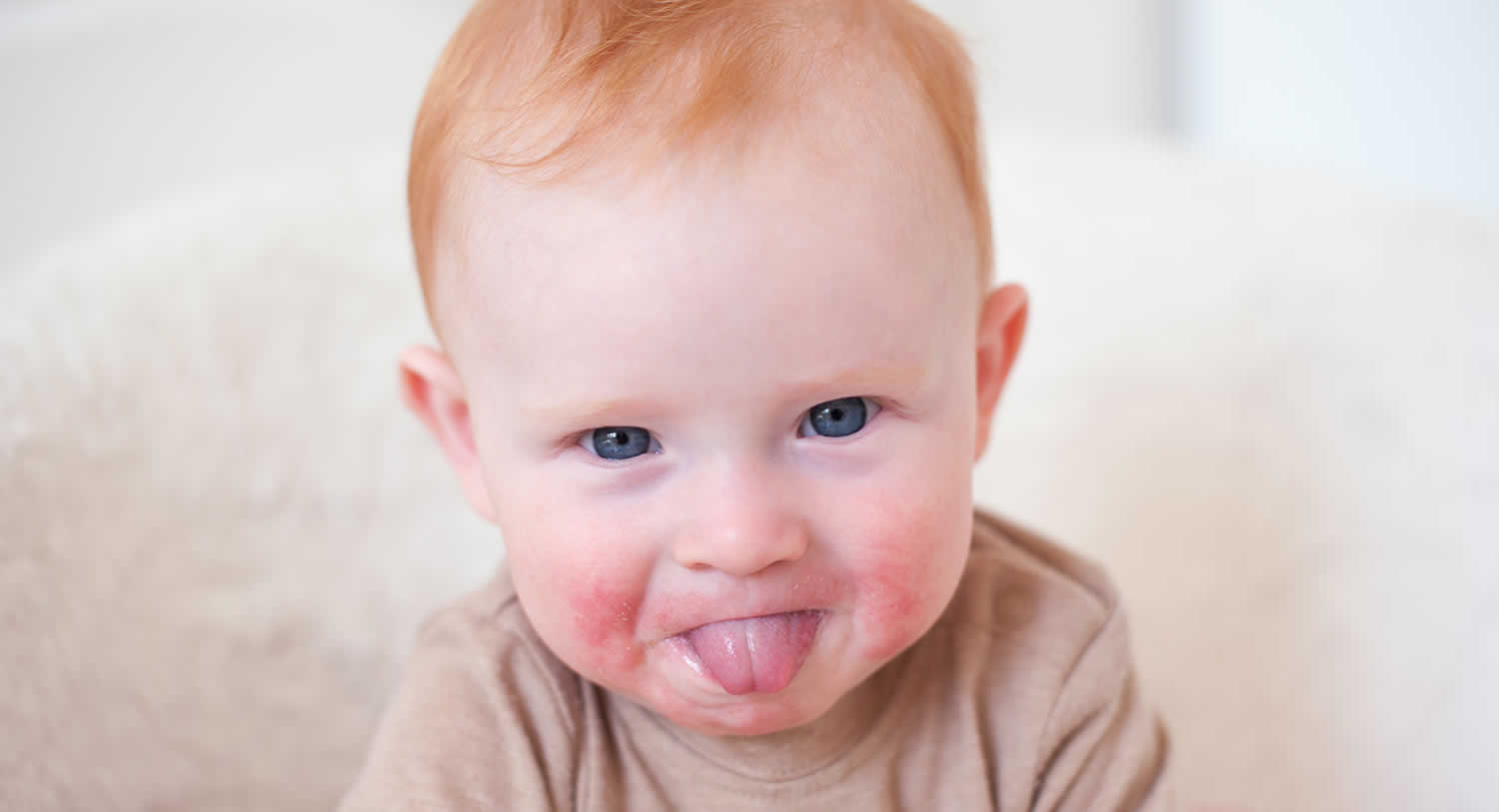 Parvovirus B19 infection in pregnant patients can have severe fetal complications. Rarely, a baby will develop severe anemia (hydrops fetalis) caused by its mother’s infection with fifth disease, and the woman may have a miscarriage and intrauterine death 4). When parvovirus B19 infects a fetus, hydrops fetalis occurs because the virus affects red blood cell production in the fetus which, in turn, causes high output heart failure. But this is not common. It happens less than 5% of the time among all pregnant women with parvovirus B19 infection, and it happens more commonly during the first half of pregnancy. Mothers in their second trimester of pregnancy are at greatest risk of developing complications from parvovirus B19, but cases have been reported at all points of pregnancy. Any pregnant woman who may have been exposed to parvovirus B19 should contact their obstetrician or healthcare provider as soon as possible.

Fifth disease outbreaks in the workplace and pregnancy

Pregnant women may choose to continue going to their workplace if there is an outbreak of fifth disease happening. However, if you are not immune to parvovirus B19 and are not currently infected, you may want to stay away from people with fifth disease while you are pregnant. Talk with your family, healthcare provider, and employer to decide what is best for you.

Healthcare providers who are pregnant should know about the potential risks to their baby and discuss this with their doctor. All healthcare providers and patients should follow strict infection control practices to prevent parvovirus B19 from spreading.

Testing for parvovirus B19 during pregnancy

A blood test for parvovirus B19 can show if you:

Monitoring parvovirus B19 infection during pregnancy

Any pregnant woman who may have been exposed to parvovirus B19 should contact their obstetrician or healthcare provider as soon as possible to discuss if she:

There is no single recommended way to monitor pregnant women with parvovirus B19 infection. Your healthcare provider may recommend additional prenatal visits, blood tests, and ultrasounds.

Pet dogs and cats can get infected with other parvoviruses that do not infect humans. You can get your pets vaccinated to prevent infection from such parvoviruses.

Parvovirus B19 which causes erythema infectiosum or fifth disease is spread by contact with others who are infected, specifically by exposure to fluid from the respiratory secretions, such as saliva, sputum, or nasal mucus, when an infected person coughs or sneezes. Transmission can also occur via blood exposure. Viremia from parvovirus B19 exposure usually occurs within 5 to 10 days, and the patient remains contagious approximately 5 days after viremia occurs. You are most contagious when it seems like you have “just a fever and/or cold” and before you get the rash or joint pain and swelling. After you get the rash you are not likely to be contagious, so it is usually safe for you or your child to go back to work or school.

People with fifth disease who have weakened immune systems may be contagious for a longer amount of time.

Once you recover from fifth disease, you develop immunity that generally protects you from parvovirus B19 infection in the future.

There is no vaccine or medicine that can prevent parvovirus B19 infection. You can reduce your chance of being infected or infecting others by:

Once you get the rash, you are probably not contagious. So, it is usually safe for you to go back to work or for your child to return to school or a child care center.

Healthcare providers who are pregnant should know about potential risks to their baby and discuss this with their doctor.

Many people infected with parvovirus B19 do not have any symptoms, or they have only mild, nonspecific rash illness, not unlike the common cold 5). You can have a range of symptoms depending on your age and overall health. About two out of 10 people who get infected with Parvovirus B19 will have no symptoms. Others may have only mild, rash illness.

Bright redness of the cheeks is the classic initial sign, without affecting the areas around the mouth. About a day later, the rash shows up as a faint red, “lacy” rash on the trunk, arms, and legs. There may also be a fever or joint pain.

If immunocompetent host becomes infected, there can be a range of symptoms from no symptoms to non-specific flu-like symptoms to the classic symptoms of facial rash and arthralgias. Immunocompromised individuals typically do not show manifestations of rash and joint symptoms due to the belief that these are immune-mediated, and they would not have an adequate immune response to this infection for these symptoms to develop. Patients who are immunocompromised may develop chronic parvovirus B19 infection which can lead to neutropenia, thrombocytopenia, or complete bone marrow suppression 6).

After initial viremia, you may get the classic red rash on your cheeks with surrounding oral pallor develops called “slapped-cheek rash”. It is more common in children than adults. This rash does not develop early in the disease process and may be the only clinical diagnostic finding in this disease process. This facial rash can last 4 to 5 days. At the time the facial rash develops, the patient usually feels well, and the viremia has resolved. This rash is thought to be immune-mediated.

Some people may get a second maculopapular rash a few days later on their chest, back, buttocks, or arms and legs. The rash may be itchy, especially on the soles of the feet. It can vary in intensity and usually goes away in seven to 10 days, but it can come and go for several weeks. As it starts to go away, it may look lacy. The lacy rash is often present more on the extensor surfaces. The palms of the hands and soles of the feet are typically not affected 7).

You may also have painful or swollen joints

People with fifth disease can also develop pain and swelling in their joints. This is called polyarthropathy syndrome. It is more common in adults, especially women. Some adults with fifth disease may only have painful joints, usually in the hands, feet, or knees, and no other symptoms. The joint pain usually lasts 1 to 3 weeks, but it can last for months or longer. It usually goes away without any long-term problems.

Fifth disease is usually mild for children and adults who are otherwise healthy. But for some people, parvovirus B19 infection can cause serious health complications, such as chronic anemia that requires medical treatment.

You may be at risk for serious complications from fifth disease if you have a weakened immune system caused by leukemia, cancer, organ transplants, or HIV infection.

There is usually no need for testing, as erythema infectiosum (Fifth disease), healthcare providers can often diagnose fifth disease just by seeing “slapped cheek” rash on a patient’s face. They can also do a blood test to determine if you are susceptible or possibly immune to parvovirus B19 infection or if you were recently infected. This is not a routine test but can be performed in special circumstances. The blood test may be particularly helpful for pregnant women who may have been exposed to parvovirus B19 and are suspected to have fifth disease. Any pregnant woman who may have been exposed to parvovirus B19 should contact their obstetrician or healthcare provider as soon as possible.

Testing can be obtained via bloodwork for specific antibodies. Testing for specific parvovirus B19 IgM antibody can confirm acute infection on serology. IgM antibodies can usually be found within 7 to 10 days of virus exposure. These can remain measurable for 2 to 3 months after exposure to the virus. IgG antibodies will start to rise about 2 weeks after viral exposure, and the patient will confer immunity as these will then be measurable for life 8).

This testing can be useful in patients with aplastic crisis diagnosis to confirm and help support causation from acute parvovirus B19 detection. Testing for IgG antibodies can be common in prenatal testing for women to look for immunity status to parvovirus B19 to access the risk of potential congenital disabilities.

Erythema infectiosum or Fifth disease is not generally a serious condition and will go away on its own. There is no specific treatment. Symptom control and supportive management are the basis for treatment of erythema infectiosum. Use acetaminophen and/or ibuprofen for fever control, joint pain (arthralgias), and headache, if present. Affected children may remain at school, as the infectious stage or viremia occurs before the rash is evident.

Symptoms of erythema infectiosum are usually self-limited in immunocompetent hosts. These symptoms are typically mild, and some patients may be asymptomatic. In patients who are immunocompromised or in patients with hematologic disorders, symptoms can be more severe. Chronic infection and chronic anemia can occur in immunocompromised individuals. Acute infection and exposure to a fetus can be fatal. Fetal death risk is highest in infected pregnant patients under 20 weeks gestational age 9).