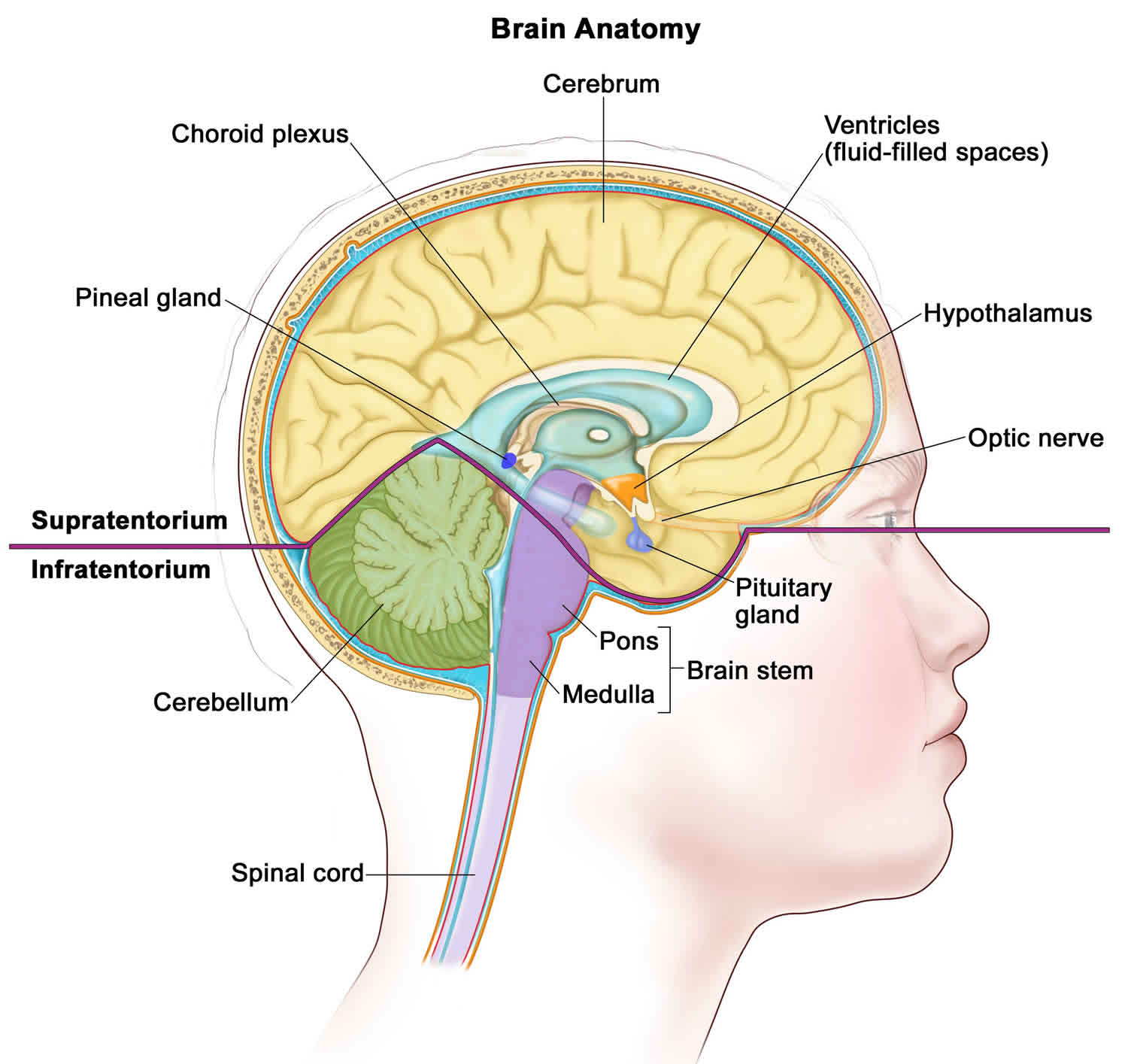 Surgery followed by radiotherapy plus chemotherapy has achieved excellent survival outcomes for patients with intracranial germinomas 12). In about 10–20% of patients, however, the germinoma tumor recurs 10 years after first-line treatment 13). Furthermore, since the majority of patients with intracranial germinoma are children and adolescents, a large irradiated volume or high radiation dose results in late adverse effects such as growth disturbances or brain dysfunction 14). Thus, with this highly curable disease, alternative therapeutic strategies for treating refractory tumors, preventing avoidable morbidity and maintaining quality of life have become the main goals of current pediatric oncological efforts. 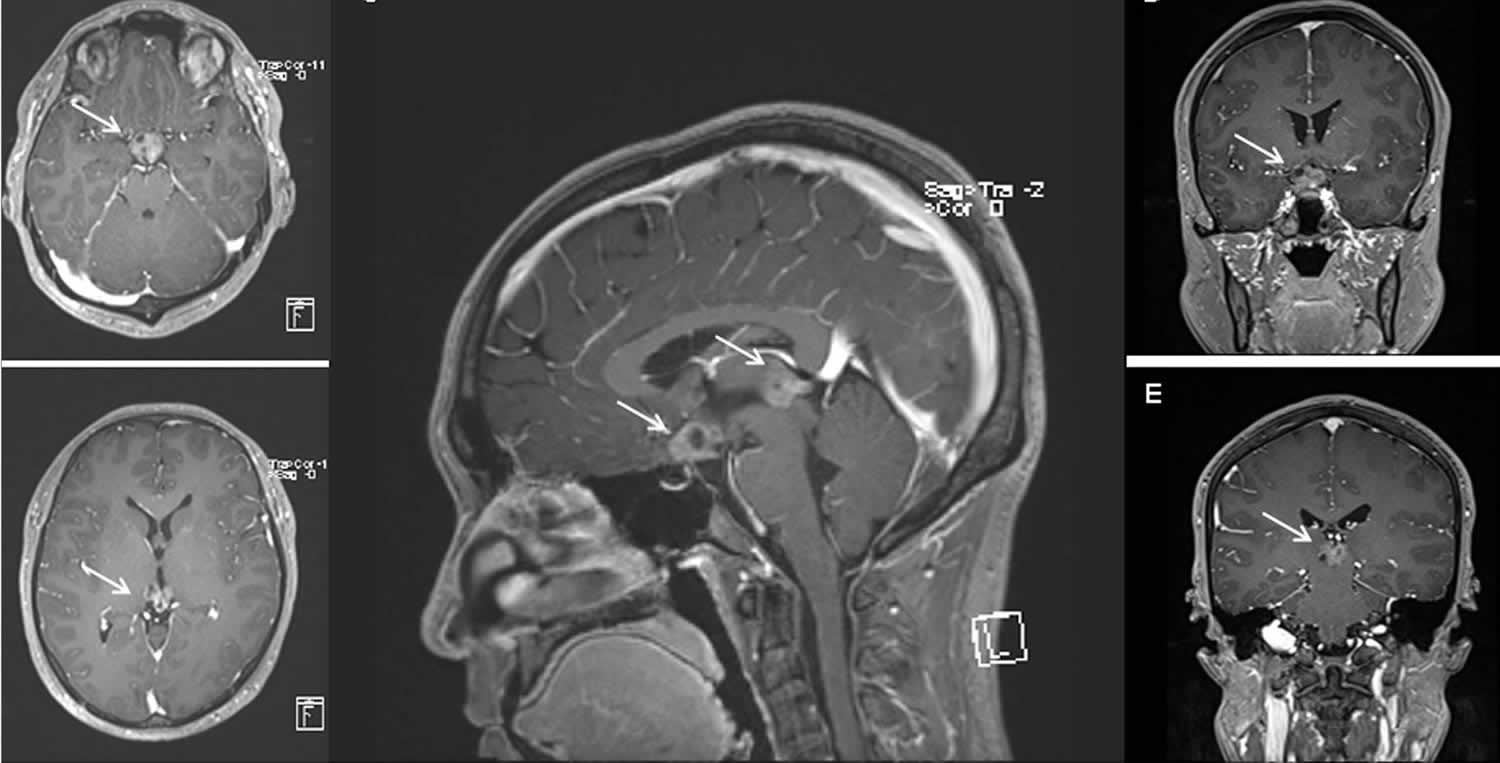 The exact cause of brain germ cell tumors is unknown. germ cell tumors appear to arise from primordial germ cells that migrate to the germinal ridges in the developing embryo 16). This process appears to be under the control of complex molecular events. Aberration in any of these molecular pathways may potentially give rise to germ cell tumors.

Important factors in cell migration include the extracellular matrix, which affects cell adherence and migration. Other factors, such as chemotropic factors, may also be involved in cell migration 17). In vitro studies have shown that tumor growth factor beta 1 may initiate the migration of primordial germ cells 18).

Some primordial germ cells that have left the yolk sac endoderm migrate aberrantly cranially towards the diencephalic midline structures rather than laterally to genital ridges.

The vacular theory may be an alternative event in which the primodial germ cells migrate into the mesenchyme of the mesentery and stimulate blood vessel formation and may reach intracranial locations via the circulation.

The surge of the neuroendocrine functions of reproduction in the diencephalon may also be a cause or contributing factor to the development of brain germ cell tumors, as demonstrated by the location of these tumors and their predominance in the pubertal age group 20).

The signs and symptoms of brain germinoma tumors depend on the location of the tumor in the brain, as follows:

All patients had presenting symptoms at diagnosis such as headache and blurred vision, with a median symptom duration of 2 months (range, 1–36 months) 29). Nonspecific symptoms such as enuresis, anorexia, and psychiatric complaints 30) can lead to delays in a diagnosis, whereas signs of increased intracranial pressure or visual changes tend to result in an earlier diagnosis 31). A total of 17 patients (81%) showed endocrine dysfunction, and 9 patients (43%) had hydrocephalus 32).

Radiographic characteristics of brain germinoma tumors cannot reliably differentiate germinomas from non-germ cell tumors or other brain tumors. The diagnosis of germ cell tumors is based on the following:

The diagnosis of a suspected brain germ cell tumor and an assessment of the clinical deficits and extent of metastases can usually be confirmed with the following tests:

If possible, a baseline neuropsychologic examination should be performed after symptoms of endocrine deficiency and raised intracranial pressure are resolved.

It is crucial that appropriate staging is determined and that pure germinomas are distinguished from non-germinomatous germ cell tumors. Chemotherapy and radiation treatment plans differ significantly depending on germ cell tumor category and extent of disease.

The diagnosis and classification of brain germinoma tumors can be made on the basis of histology alone, tumor markers alone, or a combination of both 34). There is an effort to use tumor markers for prognostication on the basis of the presence and degree of elevation of alpha-fetoprotein (AFP) and beta-HCG. This is an evolving process, and cooperative groups in North America, Europe, and Japan have adopted slightly different criteria. For example, groups in the United States and Europe consider tumors to be secreting or mixed GCTs if serum and/or CSF alpha-fetoprotein (AFP) levels are 10 ng/mL or higher and/or serum and/or CSF beta-HCG levels are 50 IU/L or higher; however, several European and Asian groups designate tumors with serum and/or CSF alpha-fetoprotein (AFP) levels of 50 ng/mL or higher and/or beta-HCG levels of 100 IU/L or higher as secreting germinoma tumors. Patients with pure germinomas and teratomas usually present with negative markers, but low levels of beta-HCG can be detected in patients with germinomas 35).

Germ cell tumors may be disseminated throughout the neuraxis at the time of diagnosis or at any disease stage. Several patterns of spread may occur in germinomas, such as subependymal dissemination in the lateral or third ventricles and parenchymal infiltration. Rarely, extracranial spread to lung and bone has also been reported 38).

Patients with bifocal intracranial germinomas limited to the suprasellar and pineal region are being treated in the same manner as are patients with synchronous, localized, nonmetastatic tumors in ongoing studies in North America (COG ACNS1123 [NCT01602666]) and Europe (SIOP CNS GCT II [NCT01424839]).

For children older than 3 years and adults, radiation therapy has been an important component of therapy for germinomas and non-germinomatous germ cell tumors, although the optimal total dose and field size are debated.

Table 1 outlines the treatment options for newly diagnosed and recurrent childhood CNS germ cell tumors. Dramatic improvements in survival have been achieved for children and adolescents with cancer. Between 1975 and 2010, childhood cancer mortality decreased by more than 50% 40). Childhood and adolescent cancer survivors require close monitoring because cancer therapy side effects may persist or develop months or years after treatment.

Germinomas are highly radiosensitive and have been traditionally treated successfully with radiation therapy alone. Historically, patients with nondisseminated disease have been treated with craniospinal irradiation plus a boost to the region of the primary tumor. The dose of craniospinal irradiation has ranged from 24 Gy to 36 Gy, although studies have used lower doses. The local tumor dose of radiation therapy has ranged between 40 Gy and 50 Gy. Studies of lower-dose craniospinal irradiation have shown excellent outcomes 41). This modification has resulted in 5-year overall survival rates of higher than 90% 42). These excellent survival rates have allowed investigators to focus on reducing radiation treatment volume and dose in an attempt to decrease late effects 43).

Chemotherapy has been explored in an effort to reduce radiation therapy doses and associated neurodevelopmental morbidity. Several studies have confirmed the feasibility of this approach for maintaining excellent survival rates, but the number of treated patients is small 46).

Chemotherapy agents such as cyclophosphamide, ifosfamide, etoposide, cisplatin, and carboplatin are highly active in CNS germinomas. Patients receiving chemotherapy agents that require hyperhydration (e.g., cyclophosphamide, ifosfamide, and cisplatin) are often quite challenging to manage because of the possibility of diabetes insipidus in patients with primary tumors of the suprasellar region 47).

An international group of investigators has explored a chemotherapy-only approach primarily for younger children. The investigators were able to achieve a complete response in 84% of patients with germinomas treated with chemotherapy alone. Fifty percent of these patients suffered tumor relapse or progression; many recurrences were local, local plus ventricular, and ventricular alone and/or with leptomeningeal dissemination throughout the CNS, which required additional therapy, including radiation 48). Subsequent studies have continued to support the need for radiation therapy after chemotherapy and the likely requirement for whole-ventricular irradiation (24 Gy) with local tumor site–boost (total dose, 40 Gy) 49). Excellent results have also been reported for patients with metastatic germinomas who received craniospinal irradiation of 24 Gy with local tumor site–boost (total dose, 40 Gy) 50).

Optimal management of bifocal lesions is less clear, but most investigators consider this presentation a form of multifocal primary disease to be staged as M0. A meta-analysis of 60 patients demonstrated excellent progression-free survival after craniospinal irradiation alone. Chemotherapy plus localized radiation therapy, including whole-ventricular irradiation, also resulted in excellent disease control 51).

The following are examples of national and/or institutional clinical trials that are currently being conducted:

Patients with pure germinomas have a 10-year survival rate of 90%. For nongerminomatous germ cell tumor, the 10-year overall survival rates were reported to be 30%-80% 53).

Diabetes insipidus, hypopituitarism, and visual field deficits are the most common presentation of CNS germ cell tumors and may persist despite therapy. Parinaud syndrome is common in patients with pineal tumors and often persists even after therapy.

Surgery of deep-seated structures within the brain may be associated with significant morbidity. However, modern neurosurgical navigation techniques have minimized this risk. Tissue sampling by stereotactic biopsy is a safe and rapid method of determining tumor histology. Pineal-region tumors have a surgical morbidity of 2-5%. Patients may suffer from transient movement abnormalities of eyes, ataxia, and cognitive dysfunction.

Patients may have persistent neurological deficits, even after tumor control. Neurological deficits may be significant and are multifactorial in origin. Damage by the tumor itself, surgical intervention, radiation therapy, and chemotherapy all contribute to neurological impairment irrespective of age. Patients with tumors located in the basal ganglia perform poorly compared with those who have tumors in the pineal and suprasellar regions; they have lower full-scale IQs and short-term retention of verbal and visual stimuli 56).

Several long-term studies have demonstrated poor performance in adaptive skills, particularly in psychosocial domains, behavioral dysfunction, and financial difficulties, leading to poor quality of life 57). Patients who had undergone surgical biopsies did worse than patients who had surgical resection. Lower Karnofsky performance status scale scores following surgery have been associated with impaired neurocognitive function that may decline over time, particularly in children 58).

More than 50% of patients may continue to suffer from endocrine abnormalities, with growth hormone deficiency and growth retardation, hypopituitarism, and hypothyroidism. They may require lifelong hormonal replacement therapy 59).

Brain injury in the form of atrophy, multifocal encephalomalacia, leukoencephalopathy, and focal necrosis has been reported in patients with intracranial germ cell tumors 60). The occurrence of cerebrovascular occlusion may lead to the development of strokes, with an almost 59-fold increase risk of death in long-term survivors 61).

Patients with intracranial germ cell tumors have a cumulative incidence of secondary cancer of 6%, with a cumulative risk of death due to malignancy of 16%. Radiation therapy and chemotherapy may both promote the development of secondary cancers, including but not limited to acute myeloid leukemia and radiation-induced brain neoplasms 62).