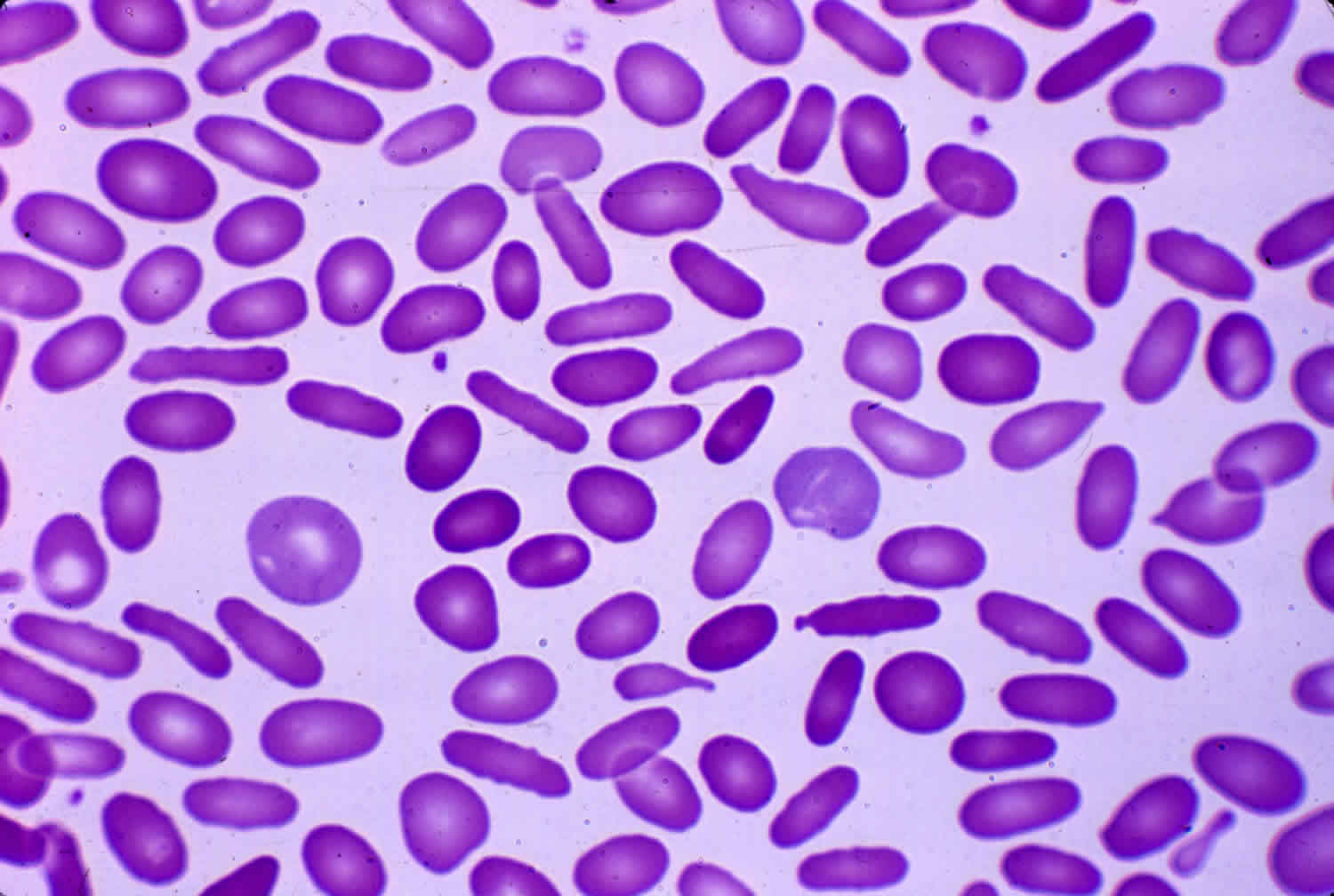 Hereditary elliptocytosis is caused by a genetic change in either the EPB41, SPTA1, or SPTB gene, and is inherited in an autosomal dominant pattern, with the exception of hereditary pyropoikilocytosis, which is generally autosomal recessive. With discovered mutation increasing, there may be still many unknown mutations can result in hereditary elliptocytosis 9). The mutated proteins in hereditary elliptocytosis increase the fragility of the erythrocytic membrane skeleton. The erythrocyte spectrin is a scaffold protein composed of 2 subunits, α-spectrin (encoded by SPTA1) and β-spectrin (encoded by SPTB), maintains the cellular shape, regulates the lateral mobility of integral membrane proteins, and provides structural support for the lipid bilayer 10). Mutations in SPTA1 are the most common pathogenesis of hereditary elliptocytosis, occurring in 65% of cases, followed by mutations in β-spectrin (30%) and protein 4.1R (5%) 11). In all these cases, the defects in spectrin or in protein 4.1R lead to a weakened lateral interactions of the spectrin‐based membrane skeleton.

When hereditary pyropoikilocytosis was originally described in 1975, it was thought to be a distinct entity due to the increased thermal sensitivity of the red cells and the unusual morphological features of red cells in these patients that mimicked those seen in blood smears of individuals with severe thermal burns 12). However, subsequent detailed molecular studies have shown that hereditary pyropoikilocytosis is a subset of hereditary elliptocytosis due to either homozygous or compound heterozygous mutations in the α‐spectrin gene leading to very severe disruption of spectrin self‐association 13).

Most patients are asymptomatic and do not have any obvious physical signs. findings in patients with clinically significant hemolysis include the following:

In otherwise asymptomatic patients, hemolysis may occasionally increase because of intercurrent infections (eg, hepatitis, infectious mononucleosis, and malaria), renal transplant rejection, vitamin B-12 deficiency, or even normal pregnancy. Transfusion support may be necessary during hemolysis.

The silent carrier state in hereditary elliptocytosis is associated with normal peripheral smear and no anemia. Patients are asymptomatic, and the condition is detected by laboratory testing of membrane cytoskeletal properties that is performed during pedigree analysis.

It is often associated with clinically apparent mild to moderate hemolysis, with a peripheral smear showing both spherocytes and elliptocytes but no poikilocytes.

Unlike hereditary pyropoikilocytosis, which is generally an autosomal recessive disorder, spherocytic elliptocytosis is an autosomal dominant disorder.

Features include the following:

The mode of transmission is autosomal dominant. Only heterozygous conditions are reported, and the homozygous state is thought to be lethal in utero.

Of note, Southeast Asian ovalocytosis confers resistance against Plasmodium falciparum infection, likely because of alterations in band 3, which is one of the malaria receptors.

Treatment for hereditary elliptocytosis is often not necessary. A diet rich in folic acid or folic acid supplementation is recommended to avoid consequences of folate deficiency in a hemolytic state 15). Other supportive measures, such as blood transfusions, may be indicated if the anemia is severe. When symptoms are severe enough, some people with hereditary elliptocytosis will be treated with transfusion or even removal of the spleen (splenectomy) 16).