Histamine is a biogenic amine (2-[4-imidazolyl]ethylamine) and is synthesized by the pyridoxal phosphate (vitamin B-6)–containing L-histidine decarboxylase from the amino acid histidine 1. Histamine is synthesized by mast cells, basophils, platelets, histaminergic neurons, and enterochromaffine cells, where it is stored intracellularly in vesicles and released on stimulation 1. Histamine is a potent mediator of numerous biologic reactions. Besides the well-known triggering of degranulation of mast cells by crosslinking of the FcεRI receptor by specific allergens, several other nonimmunologic stimuli, such as neuropeptides, complement factors (i.e, C3a and C5a), cytokines, hyperosmolarity, lipoproteins, adenosine, superoxidases 2, hypoxia, chemical and physical factors (e.g, extreme temperatures, traumas) 3, or alcohol and certain food and drugs, may activate mast cells.

Due to microbial contamination, food and beverages sometimes contain varying amounts of histamine in relevant amounts. Therefore, spoiled or fermented foods can contain high levels of histamine. In particular, food that undergoes microbial ripening, such as cheese, salami, sauerkraut, or red wine, can contain high levels of histamine (see Tables 3 and 4 below) 1. Histamine intolerance belongs to the group of non-IgE-mediated hypersensitivity-like reactions, and is known as a pharmacological food intolerance. Currently, no valid in vitro tests can prove histamine intolerance; thus, a double-blind, placebo-controlled food challenge test remains the gold standard for diagnostic workup of non-IgE-mediated food intolerance 4.

Histamine is synthesized primarily by mast cells, basophils, histaminergic neurons in the basal ganglia of the brain and enterochromaffin-like cells in the stomach 5. These cells produce large amounts of histamine and are thought to be the major histamine-producing cells (Figure ​1). They continuously synthesize histamine, which is then linked to the carboxyl group of heparin and stored in intracellular granules until the cells receive the appropriate activating stimulus. Upon external stimulation, these cells degranulate, releasing the stored histamine. Stimuli that trigger histamine release by these major histamine-producing cells have been reviewed extensively 6. Antigen crosslinking of antigen-specific IgE bound to the high-affinity IgE receptor, FcεRI, on the mast cell and basophil surface is the most robust stimulus that triggers histamine release by these cells 6. Substance P and allergy-inducing drugs that bind to G-protein-coupled receptors can also trigger basophils and mast cells to release histamine via different signaling pathway 7. In addition, complement components, such as the C3a and C5a “anaphylatoxins,” have also been shown to induce histamine release by mast cells 8. Many cytokines, including IL-3, IL-18, IL-33, GM-CSF, and SCF, promote histamine synthesis 9. In general, cytokines alone do not induce histamine release although it remains controversial whether IL-33 can have this effect. Some reports describe that IL-33 stimulates histamine release 10, while other reports dispute this 11. It is suggested that IL-33 alone does not induce histamine release by basophils, but enhances histamine release in response to IgE/FcεRI crosslinking 12. 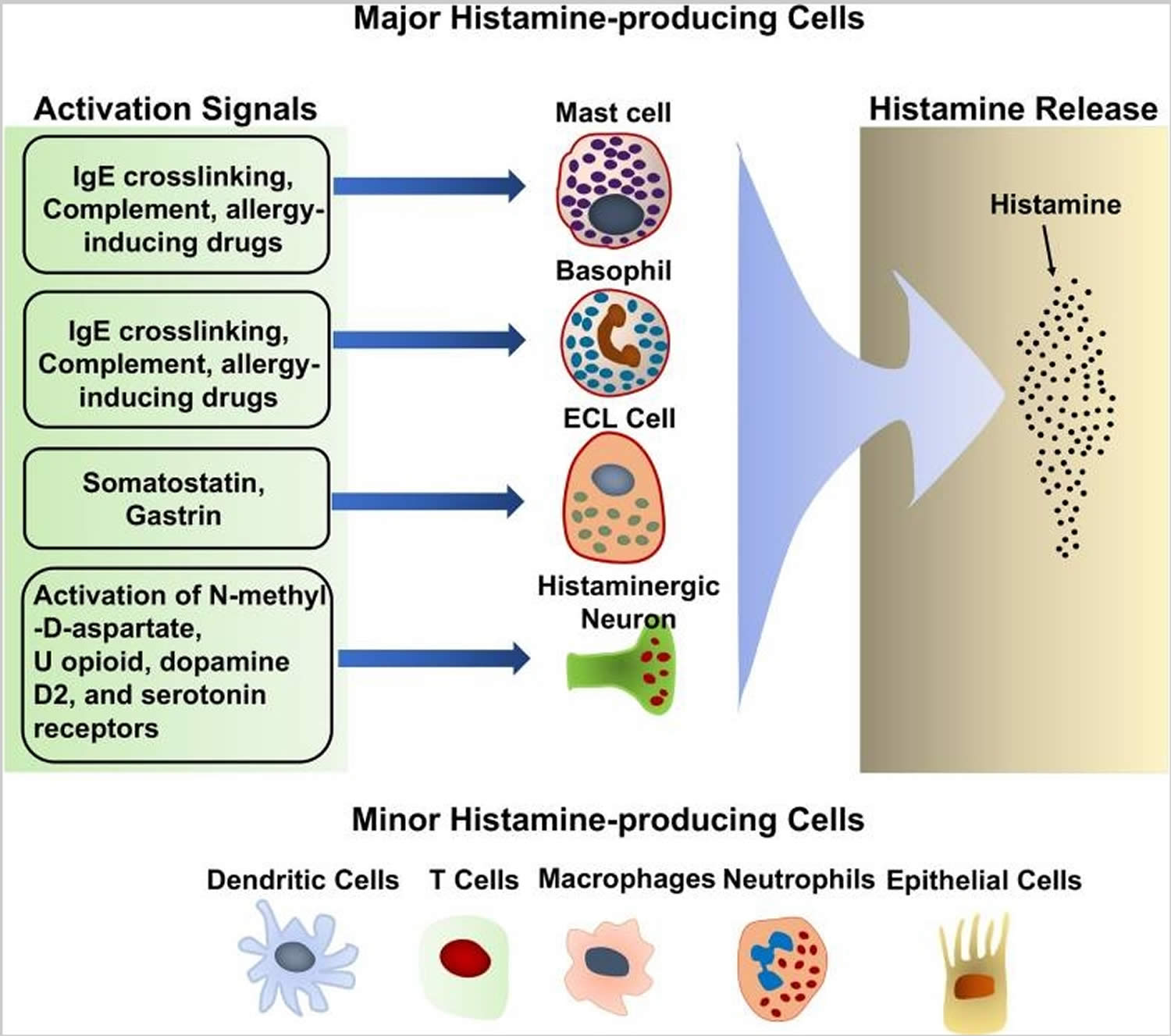 What does histamine do? 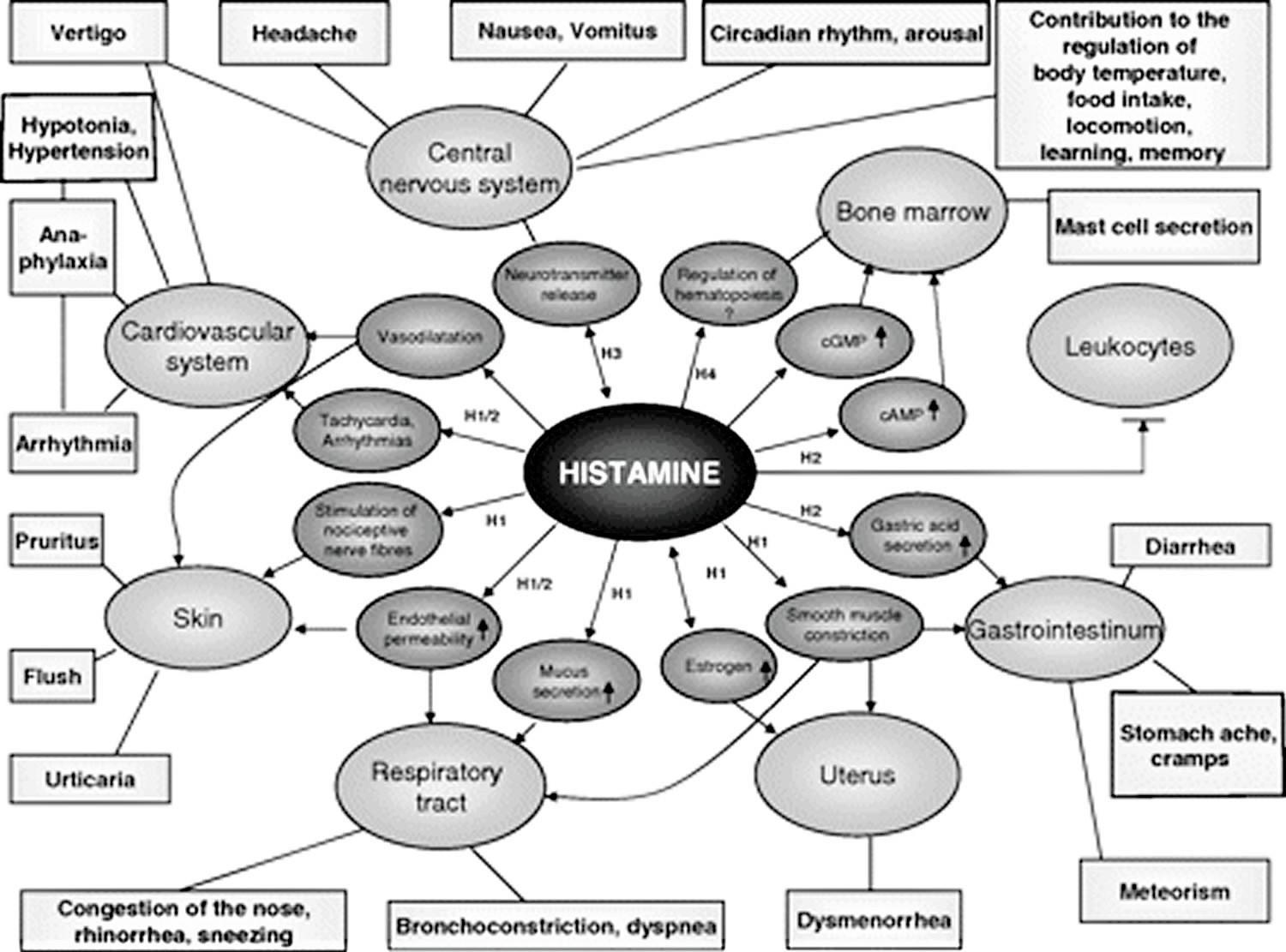 Table 1. Histamine effects according to plasma histamine concentration (ng/mL or nanogram per mililiter)

Histamine can be metabolized in 2 ways (Figure 2 and Table 2): 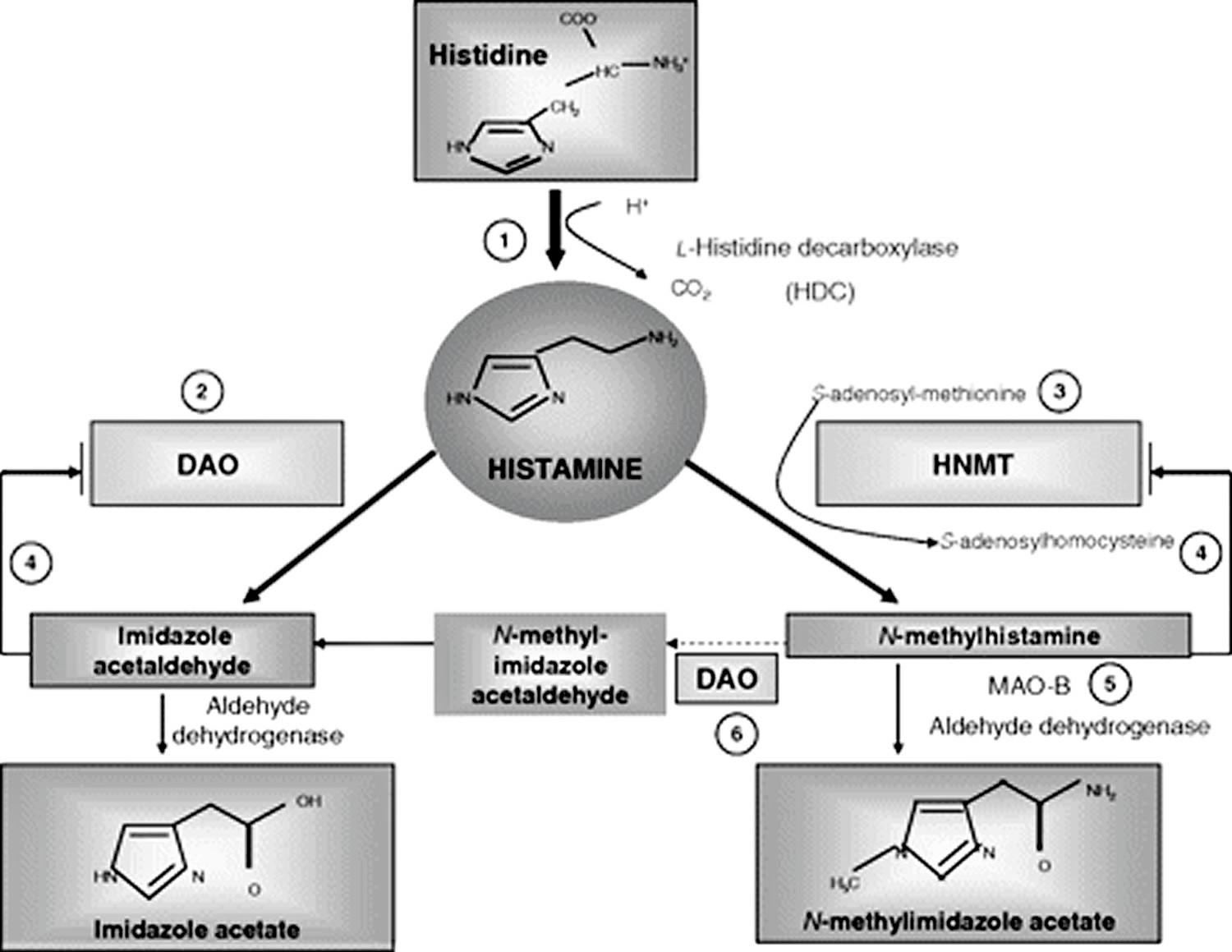 Footnotes: Summary of the histamine metabolism. The biogenic amine histamine is synthesized by decarboxylation of the amino acid histidine catalyzed by l-histidine decarboxylase (HDC) (1). Histamine can be metabolized by extracellular oxidative deamination of the primary amino group by diamine oxidase (DAO) (2) or intracellular methylation of the imidazole ring by histamine-N-methyltransferase (HNMT) (3). Therefore, insufficient enzyme activity caused by enzyme deficiency or inhibition may lead to accumulation of histamine. Both enzymes can be inhibited by their respective reaction products in a negative feedbackloop (4). N-Methylhistamine is oxidatively deaminated to N-methyl-imidazole acetaldehyde by monoamine oxidase B (MAO B) (5) or by DAO (6). Because the methylation pathway takes place in the cytosolic compartment of cells, MAO B (5) has been suggested to catalyze this reaction in vivo 26.

In the female genital tract, histamine is mainly produced by mast cells, endothelial cells, and epithelial cells in the uterus and ovaries. Histamine-intolerant women often suffer from headache that is dependent on their menstrual cycle and from dysmenorrhea. Besides the conctractile action of histamine, these symptoms may be explained by the interplay of histamine and hormones. Histamine has been shown to stimulate, in a dose-dependent manner, the synthesis of estradiol via H1R (histamine 1 receptor); meanwhile, only a moderate effect on progesterone synthesis was observed 36. The painful uterine contractions of primary dysmenorrhea are mainly caused by an increased mucosal production of prostaglandin F2α stimulated by estradiol and attenuated by progesterone. Thus, histamine may augment dysmenorrhea by increasing estrogen concentrations. And, in reverse, estrogen can influence histamine action. A significant increase in weal and flare size in response to histamine has been observed to correspond to ovulation and peak estrogen concentrations 37. In pregnancy, diamine oxidase (DAO) is produced at very high concentrations by the placenta 38, and its concentration may become 500 times that when the woman is not pregnant 38. This increased diamine oxidase (DAO) production in pregnant women may be the reason why, in women with food intolerance, remissions frequently occur during pregnancy 39.

Histamine and other biogenic amines are present to various degrees in many foods, and their presence increases with maturation 42. The formation of biogenic amines in food requires the availability of free amino acids, the presence of decarboxylase-positive microorganisms, and conditions allowing bacterial growth and decarboxylase activity. Free amino acids either occur as such in foods or may be liberated by proteolysis during processing or storage 43. Numerous bacteria and some yeasts display high L-histidine decarboxylase activity and thus have the capacity to form histamine. Histidine is generated from autolytic or bacterial processes 44. Therefore, high concentrations of histamine are found mainly in products of microbial fermentation, such as aged cheese 45, sauerkraut, wine 46, and processed meat 47 (see Tables 3 and 4 below) or in microbially spoiled food. Thus, histamine, tyramine, putrescine, and cadaverine serve as indicators of hygienic food quality 43. Tyramine and putrescine also may lead to intolerance reactions in combination with histamine. Possible explanations may be the inhibition of diamine oxidase (DAO) by other amines 48 or the promotion of histamine liberation from the mucosa by putrescine 49.

Intolerance of tyramine that has vasoconstrictive properties that lead to hypertensive crisis and headache has been known mostly in patients taking monoamine oxidase (MAO)–inhibiting drugs. Orally administered tyramine in doses of 200 to 800 mg has been shown to increase systolic blood pressure by 30 mm Hg in otherwise unmedicated subjects. Conversely, in patients taking MAO-inhibiting drugs, the pressor sensitivity was 7- to 56-fold that in patients not taking MAO-inhibiting drugs 50. Eight double-blind, placebo-controlled studies have investigated the effect of tyramine on migraine. Two studies showed positive results in migraine patients who were sensitive to foods that are high in tyramine (n = 45) (19) or who had wine-provoked migraine (n = 19) 51; 6 studies showed negative results with 97 52 patients. The 2 positive studies and 2 of the negative studies were regarded as inconclusive 53 because of a lack of randomization 50, questionable blinding 51, or inappropriate selection of migraine patients without a history of suspected tyramine intolerance 54. Conversely, in 2 conclusive studies of migraine patients with a positive or negative dietary history, 125 mg oral tyramine did not precipitate more headaches than did placebo.

Alcohol, especially red wine, is rich in histamine and is a potent inhibitor of diamine oxidase (DAO) 55. The relation between the ingestion of wine, an increase in plasma histamine, and the occurrence of sneezing, flushing, headache, asthma attacks, and other anaphylactoid reactions and a reduction of symptoms by antihistamines has been shown in various studies 56. However, among the multitude of substances contained in wine, other biogenic amines such as tyramine 51 and sulfites 57 have been supposed to contribute to symptoms summarized as “wine intolerance” or “red wine asthma” 57. In double-blind, placebo-controlled wine tests with healthy persons 58 and in patients with chronic urticaria and wine intolerance 59, the histamine content did not influence wine tolerance. In the latter group, an increase in plasma histamine could be shown, paradoxically, after ingestion of the histamine-poor wine. In these patients, the ethanol metabolite acetaldehyde has been discussed as a histamine-releasing substance 59. However, the high percentage of responses to the placebo (87%) could be responsible for the absence of an effect in this study 53. Another randomized double-blind, placebo-controlled oral wine challenge in patients with a history of red wine–provoked asthma (n = 18) found no relation between wine tolerance and the wine’s content of histamine or other amines but did find a greater bronchoconstrictive response to wine with a high sulfite content 57. Sulfiting agents are widely used as antioxidants and preservatives in foods, beverages, and pharmaceuticals. Adverse reactions with a presumed relation to sulfites include anaphylactic shock, bronchospasm, urticaria, angioedema, nausea, abdominal pain, diarrhea, stroke, and death 60. Sulfite hypersensitivity has been reported mainly in patients with chronic asthma; the estimated prevalence is 5–10% in all patients 61. Asthmatic reactions have been attributed to reflex activation of the parasympathetic system by the irritating effect of sulfites, possibly enhanced by a deficiency of sulfite oxidase. Besides this pseudoallergic mechanism, in at least some cases of sulfite hypersensitity, an immunoglobulin E (IgE)–mediated immediate-type allergic reaction must be considered 62. Sulfites may be contained in wine, but they are also contained in foods that are poor in histamine, such as fruit juice, frozen vegetables, and lettuce. Thus, in patients reporting intolerance to wine, a careful history of reactions to other foods rich in histamine or sulfites should be taken. In patients who are suspected of having sulfite intolerance, skin testing and a double-blind, placebo-controlled challenge with capsules containing increasing doses of bisulfite or placebo should be performed.

In contrast to an IgE–mediated food allergy, in which the ingestion of even a small amount of the allergen elicits symptoms, in histamine intolerance, the cumulative amount of histamine is crucial. Besides variations in the amount of histamine in food according to storage and maturation, the quantity consumed, the presence of other biogenic amines, and the additional intake of alcohol or diamine oxidase (DAO)-blocking drugs are pivotal factors in the tolerance of the ingested food. Generally, an upper limit of 100 mg histamine/kg in foods and of 2 mg histamine/L in alcoholic beverages has been suggested 63. This threshold may be too high, considering the occurrence of histamine-mediated symptoms after oral ingestion of 75 mg histamine in 5 of 10 females without a history of histamine intolerance 64.

However, most of the positive studies for intolerant reactions to sulfite, histamine, and other biogenic amines do not fulfill the current scientific criteria for providing substantiated evidence of the clinical effect of these foods. Nevertheless, patients who have a conclusive history of adverse reactions to food, alcohol, drugs containing histamine, other biogenic amines, and sulfite but without proof of IgE exist. In such patients, a double-blind, placebo-controlled provocation of the suspected causal agents under close supervision by experienced specialists should be performed after exclusion of other causal diseases and informed consent of the patients—if the provocation is not unreasonably hazardous, considering the grade of the anaphylactoid reaction. Because of the great effort, time, and costs or because of patients’ fear of a repeated reaction, double-blind, placebo-controlled provocations often are not performed in clinical practice, even when they are indicated.

In addition to histamine-rich food, many foods such as citrus foods are considered to have the capacity to release histamine directly from tissue mast cells, even if they themselves contain only small amounts of histamine (Table 5). In vitro studies of persons with a history of pseudoallergic reactions to food have shown a fragility of duodenal mast cells with massive degranulation in the presence of histamine-releasing substances that is significantly greater than that shown by control subjects 66. However, clinical studies using oral challenge tests to support the hypothesis for the histamine-releasing capacity of foods are required 2. 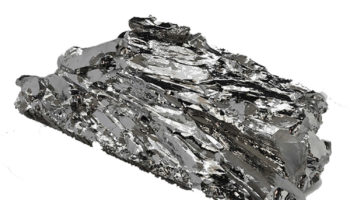 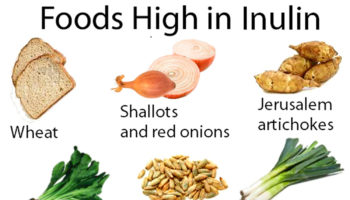