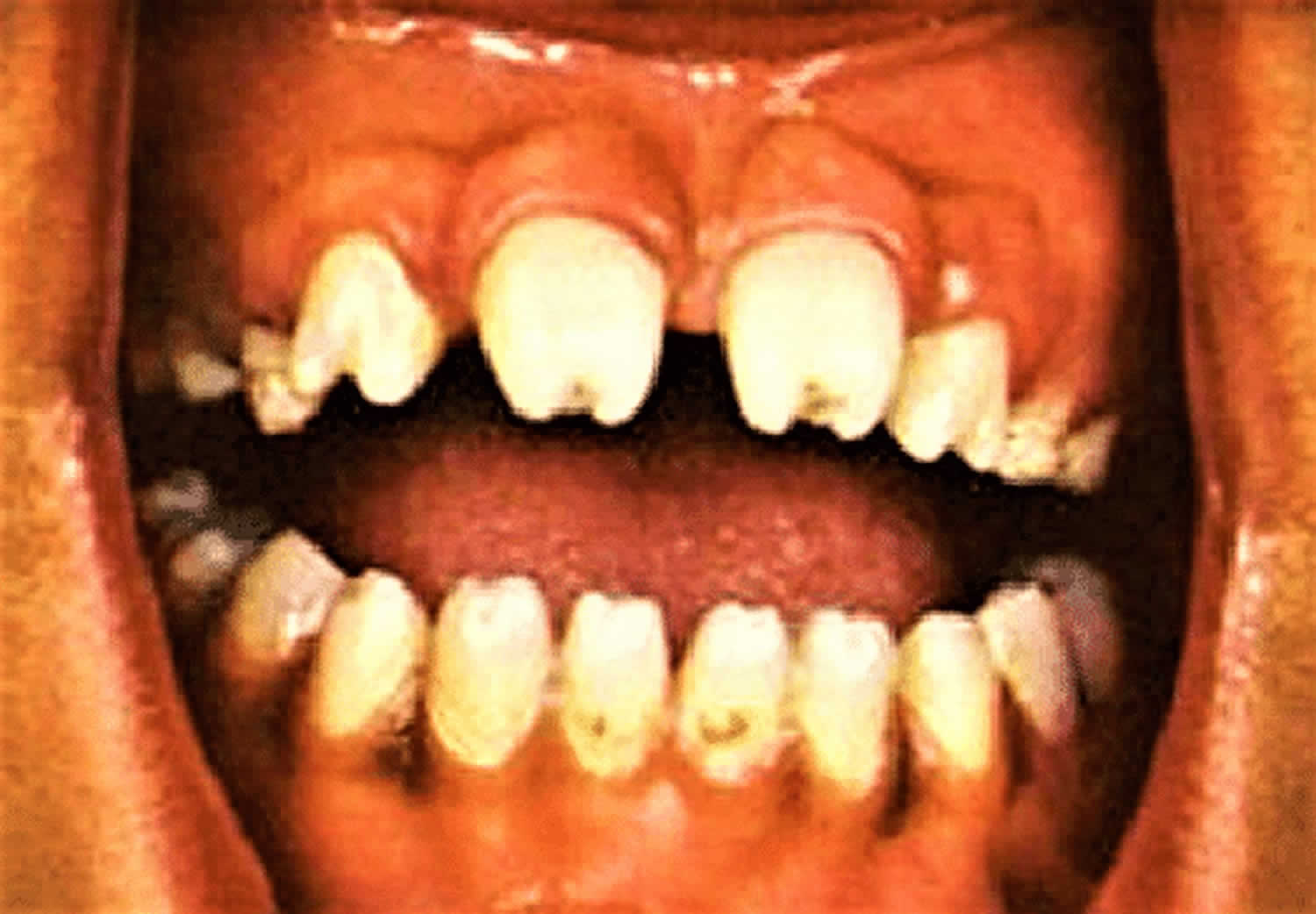 Hutchinson teeth are abnormal permanent upper central incisors that are peg-shaped and notched, usually with obvious thinning and discoloration of enamel in the area of the notching; they are widely spaced and shorter than the lateral incisors; the width of the biting surface is less than that of the gingival margin 1). Hutchinson teeth are hypoplastic notched permanent teeth, most commonly of the upper central incisors and they are smaller and more widely spaced than normal and are notched on their biting surfaces. Hutchinson teeth is a sign of congenital syphilis.

If your dentist concludes that your child does have Hutchinson teeth, the next step is a course of treatment. First and foremost, seek medical help for treating your child’s syphilis. Consultation with a pediatric infectious disease specialist will be very helpful in the workup, diagnosis, and management of patients with congenital syphilis. Next up is dealing with the abnormally formed teeth. The National Institutes of Health lists the following options 2):

The following laboratory and radiographic abnormalities can aid in the diagnosis of congenital syphilis:

Initial workup for an infant born to a woman with reactive non-treponemal and treponemal testing should follow the recommendations of the CDC 14) or American Academy of Pediatrics as listed in Red Book 15).

Treatment for congenital syphilis when the disease is confirmed or likely to be present is:

The management of an asymptomatic infant potentially exposed to syphilis but unlikely to have the disease is controversial. These are infants of mothers who received adequate treatment more than 4 weeks before delivery. However, most experts and the CDC recommends benzathine penicillin G 50,000 units/kg per dose intramuscularly (IM) in a single dose in these asymptomatic children 18).

Excellent prognosis if diagnosed and treated appropriately in a timely fashion. Syphilis is easily treated with penicillin. However, there is an increased risk for worse outcomes and possible death in:

Delayed diagnosis and treatment can lead to late, persistent clinical features of intellectual disability, skin gummas, scarring, hearing deficits and skeletal abnormalities. Initiation of treatment in some infants can lead to a Jarisch–Herxheimer reaction leading to fevers, chills, hypotension, and possibly fetal death as a result of an inflammatory response to the dying spirochetes.