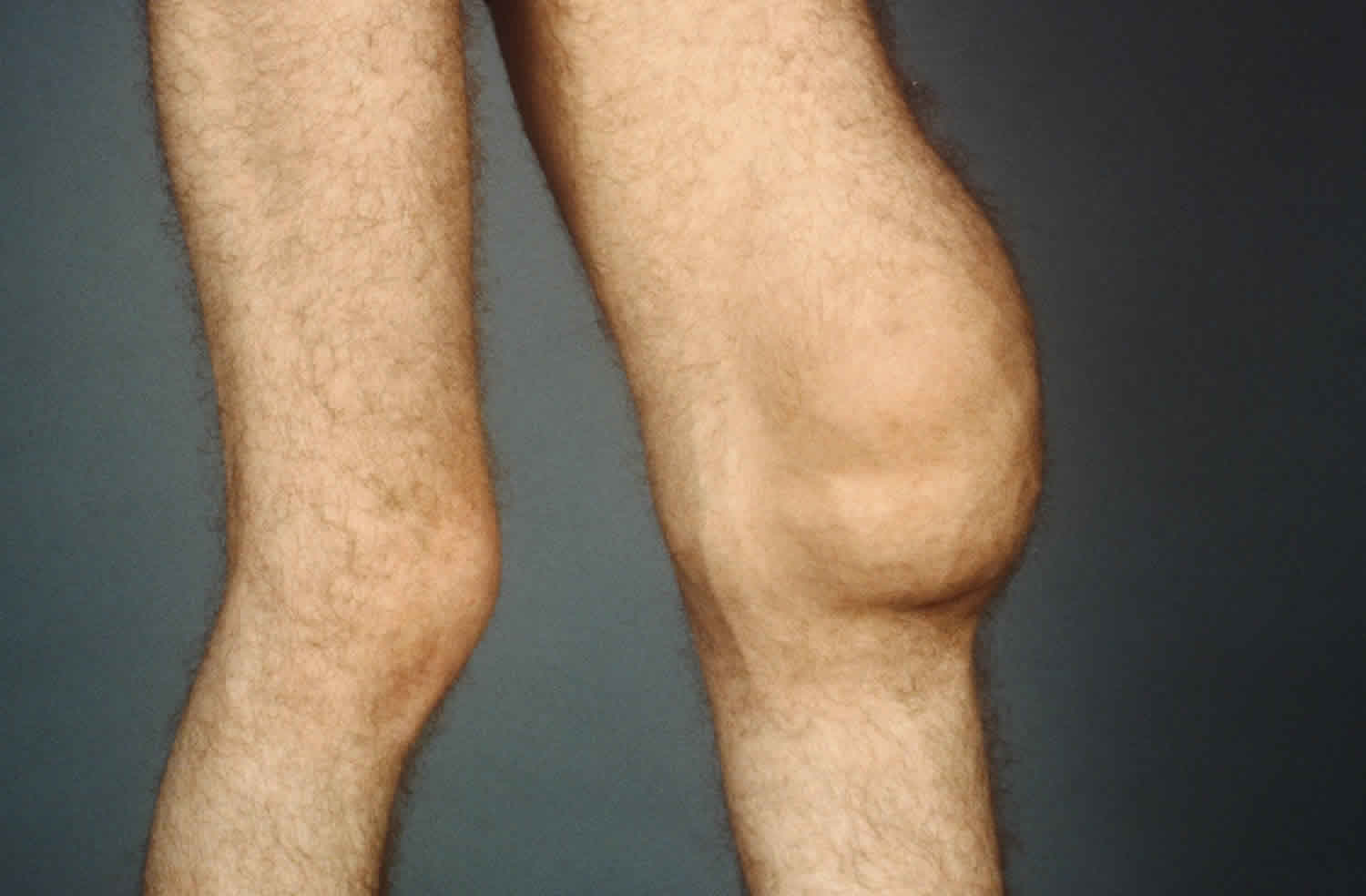 The knee is a hinge joint and susceptible to injury from trauma, inflammation, infection, and degenerative changes. Knee joint effusion may result from acute or chronic conditions 1). Knee effusion causes range from trauma or overuse to systemic disease. The knee is more frequently injured than other joints because it is part of a weight-bearing limb, and it does not have the stability brought by the joint congruity of the hip and ankle 2). The lifetime prevalence of knee joint effusion has been reported as high 27% 3). Knee joint effusion may occur at any age in children, but most commonly occurs in infants and teenagers.

The knee contains sac-like structures containing synovial fluid, called bursae, which are located between the skin and bony prominences. Fluid accumulation in the intra-articular space of a joint is called an effusion. Small, asymptomatic effusions can occur in healthy individuals. Larger joint effusions indicate intra-articular pathology. In the knee joint, trauma, overuse, infections, systemic causes, or changes in osteoarthritis may cause the effusion. These large effusions can also cause popliteal cysts. Acute swelling can be the result of a hemarthrosis from an injury to a ligament or fracture.

Understanding the basic anatomy and pathophysiology of knee effusions is important to make an accurate diagnosis. However, the most important information in making the diagnosis will be to correlate findings with a thorough history and physical exam.

If trauma is involved, the clinician should inquire about the date and mechanism of injury, what sport, if any, was involved, and whether a direct blow caused the injury. Historical findings suggestive of fracture include a mechanism of injury involving a high-velocity collision, the occurrence of a “pop” at the time of injury, age greater than 55 years and inability to bear weight immediately after the injury. Anterior cruciate ligament (ACL) injuries typically present after a noncontact deceleration, a “cutting” movement or hyperextension, often accompanied by a “pop,” with the inability to continue sports participation and associated knee instability.

Collateral ligament injuries present with effusion or localized swelling. Lateral collateral ligament injuries result from a medial-to-lateral force on the knee, while medial collateral ligament injuries result from a force in the opposite direction. The amount of pain reported depends on the severity of the injury. A severe sprain is typically less painful than a partial tear, and instability is the major complaint. Meniscal injuries can occur in isolation or in combination with ligamentous injuries. The typical mechanism of injury involves weight bearing associated with a twisting of the knee, as in cutting or squatting movements. The patient may describe postexertional swelling, clicking and locking, and pain with rotational movements.

In all cases, it should be determined how quickly swelling occurred after the injury. If an effusion evolved within four hours of injury, there is a high likelihood of major osseous, ligamentous or meniscal injury 4). In a prospective study 5) of 106 cases of hemarthrosis caused by sporting injury, 71 patients (67 percent) had complete or partial disruption of the ACL. Another prospective study 6) of acutely injured yet clinically stable hemarthrotic knees revealed that patellar dislocation and ACL disruption accounted for 35 percent and 34 percent of the diagnoses, respectively.

If swelling occurred without a history of trauma, questioning should be directed at uncovering both local and systemic disorders. Overuse injuries, or repetitive microtrauma, occasionally present with knee swelling. Important questions to ask include which recreational or occupational activity was involved, how quickly the swelling occurred or resolved, and if any self-treatment had been attempted.

Systemic disorders often cause knee effusion. A variety of infectious diseases may present as monoarticular arthritis with joint redness, effusion and pain. Infiltrative disorders such as gout and pseudogout often present in a similar fashion. Immunologic diseases such as Reiter’s syndrome, rheumatoid arthritis and rheumatic fever can also cause knee effusion. The knee is the most common joint involved in both benign and malignant tumors 7).

Infectious arthritis, if untreated, often leads to irreversible joint damage. Typical historical clues include acute onset of symptoms, history of previously abnormal joint, immunocompromised status or intravenous drug use. Physical findings such as fever, warmth and erythema over the involved joint, coupled with the absence of ligamentous or meniscal findings, suggest an infectious etiology. Radiographs are typically obtained, although they often fail to reveal any abnormality.

The most important test is joint fluid evaluation. Findings indicating infection include effusion, white blood cell (WBC) count greater than 50,000 per mm³ (50 × 109 per L), organisms present on Gram stain and positive cultures. An elevated peripheral white blood cell and erythrocyte sedimentation rate also point to an infectious process. If the effusion recurs despite appropriate therapy, evaluation for fungal infection, tuberculosis and Lyme disease should be undertaken.

Crystal-induced arthritis can present in a similar fashion as infectious arthritis. The patient often describes periodic exacerbations of joint erythema, edema and swelling in the past. A history of diuretic use, a high purine diet, increased alcohol intake or renal stones is often associated with gouty arthritis. A diagnostic evaluation of the inflamed joint fluid is essential. Joint aspirate WBC count is in the range of 3,000 to 50,000 per mm³ (3 to 50 × 109 per L), and crystals are present when the fluid is examined with a polarizing microscope. The urate crystals seen in gout appear as negative birefringent rods or needles, while the calcium pyrophosphate crystals of pseudogout are weakly positive birefringent rectangles or rhomboids 8). The presence of crystals does not rule out an infectious cause, as the two may co-exist. The fluid should always be sent for Gram stain and culture. 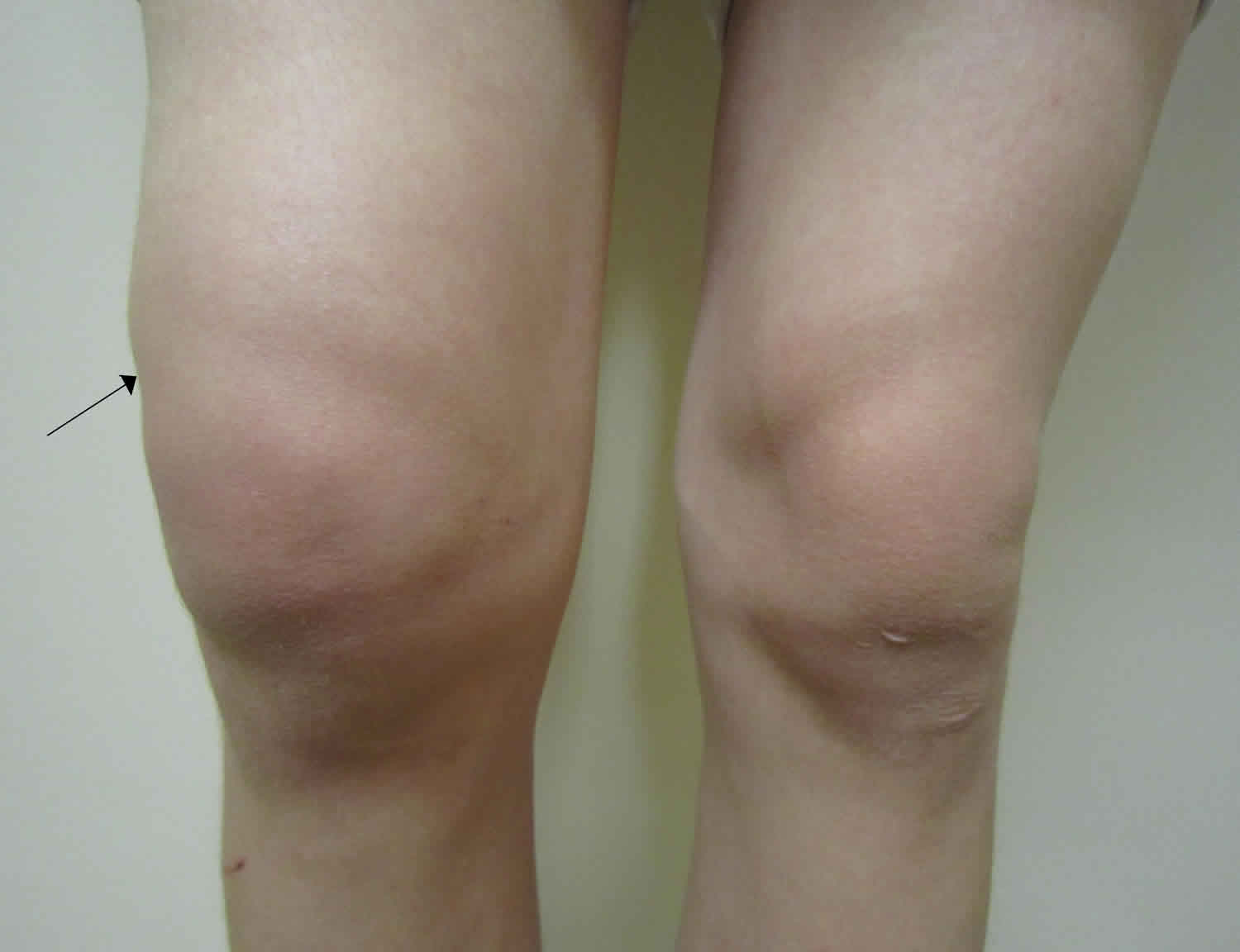 As with any musculoskeletal assessment, a precise understanding of knee pathoanatomy is essential. The knee is a compound condylar joint formed by three articulations: the first, between the medial femoral and tibial condyles, the second, between the lateral femoral and tibial condyles, and the third, between the patella and the femur. The knee moves through flexion and extension, internal and external rotation and a small degree of anterior-posterior glide.

The patella is the largest sesamoid bone in the body and provides increased mechanical advantage for knee extension. It is held in place by the medial and lateral retinaculae, and its posterior surface is covered with articular cartilage. The quadriceps muscles act on the knee through the quadriceps and patellar tendons.

The medial and lateral menisci are curved fibrocartilaginous structures located between the tibial and femoral articulating surfaces. They are connected to the joint capsule at their periphery and attached to the tibia via the coronary ligaments. The menisci act as shock absorbers within the knee joint. They also assist in lubrication of the joint and increase its elasticity. The medial meniscus is much less mobile than the lateral meniscus, accounting for its higher rate of injury 9). 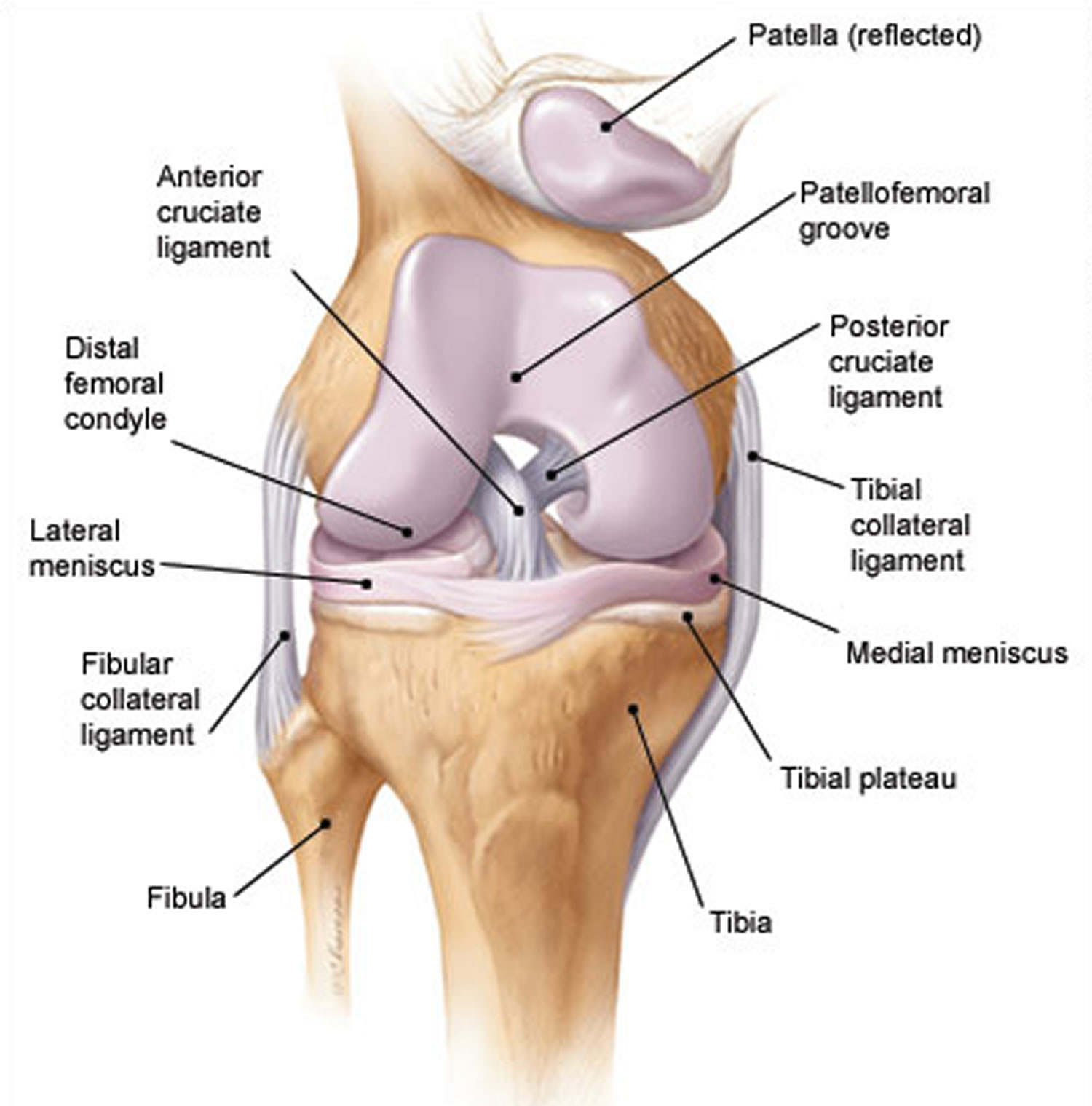 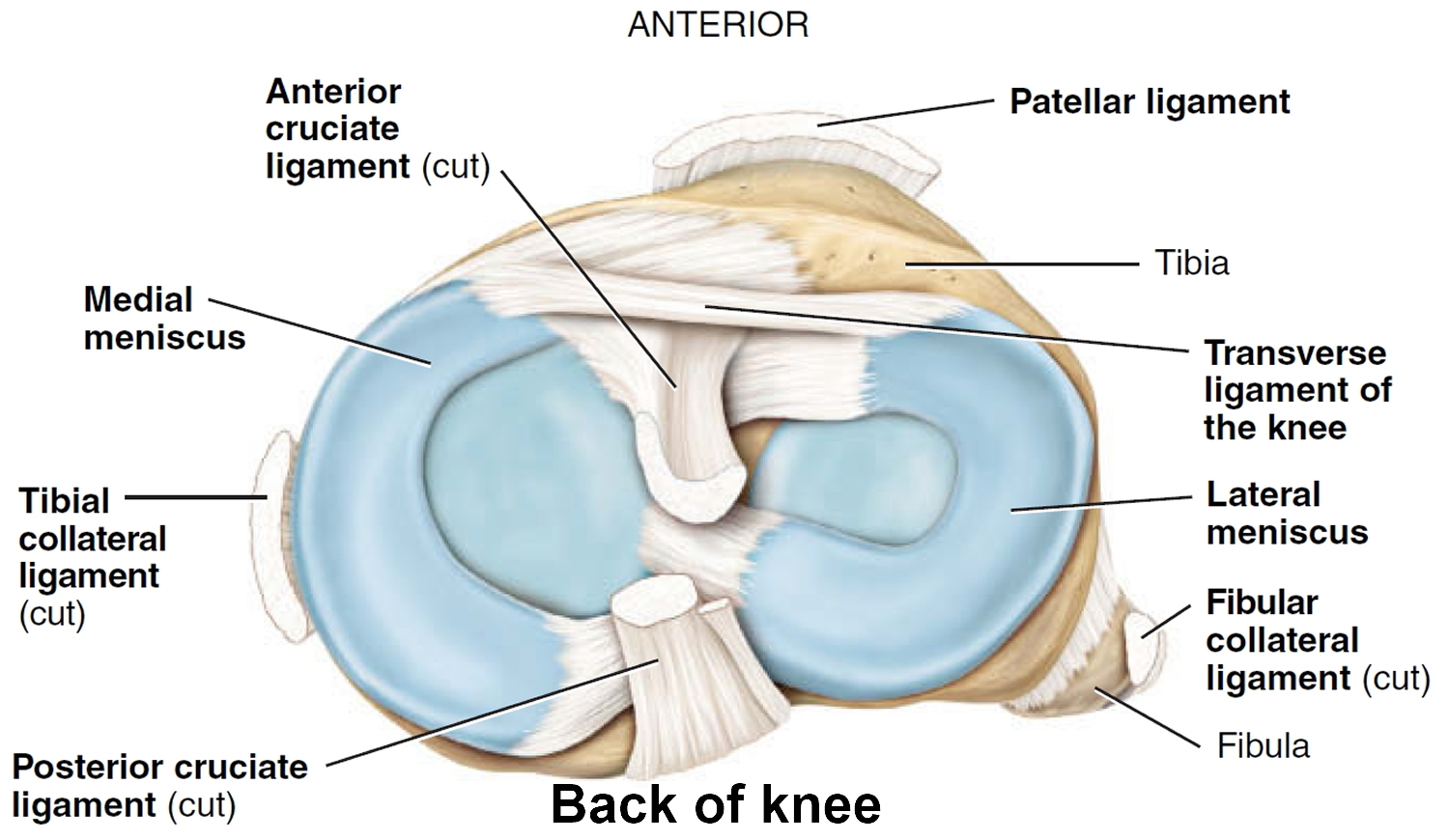 Any condition that may cause knee pathology can initially present as a knee effusion from a broad differential diagnosis. A knee effusion can be caused by an acute or chronic condition which may be inflammatory or non-inflammatory. The most common diagnoses in the primary care setting are osteoarthritis, trauma, and gout 10).

The evaluation of an acutely swollen knee must begin with a very thorough history. Important questions to ask include mechanism of injury, duration, acuity of onset, aggravating symptoms, or if swelling occurred without trauma. A knee effusion with a history of recent injury may suggest a derangement such as a ligament or meniscal tear, while an atraumatic effusion would have a higher suspicion for septic arthritis. A history of previous surgery should be determined in every patient who presents with knee swelling. Systemic symptoms of inflammation or infection should be investigated as well. Patients commonly complain of swelling and stiffness with decreased range of motion 12).

A knee joint effusion will demonstrate swelling around the patella and distend of the suprapatellar space. Patients may have a restricted range of motion along with pain with ambulation. The exam should include observation of gait, palpation of the external knee, range of motion, joint line tenderness, McMurray tests, Thessaly test, duck walk, patellar tendon stability (ACL, PCL, valgus, varus), and a patellofemoral joint test (compression test) 13). Both the ballottement test and bulge test are done to look for knee effusion. The ballottement test is done by pressing upward on the medial aspect of the knee 2 to 3 times, then tapping the lateral patella to see if it floats outward due to effusion. Always compare the exam with the unaffected knee. In septic arthritis, the following symptoms are the only ones to occur in more than 50% of patients: joint pain, a history of joint swelling, and fever 14).

The use of plain radiographs is often necessary to assess a swollen knee. In an acute injury, selecting the appropriate radiographic series is critical. In patients presenting with an acutely swollen knee, initially plain, weight-bearing radiographs in 2 planes should be ordered to look for a fracture, in case of trauma. A fabella, a sesamoid bone located inside the gastrocnemius may be seen on an x-ray. It is a radio-opaque marker for the posterior border of a knee’s synovium. The fabella sign or displacement of the fabella is seen with a synovial effusion and popliteal mass. The same lateral knee radiograph may show an increased opacity and widening of the suprapatellar bursa, which should be assessed if the fabella sign is seen. Another reason for plain radiographs is to detect erosive disease found in rheumatoid arthritis (RA), or joint space narrowing found both in osteoarthritis and rheumatoid arthritis 15).

An ultrasound of the effusion can help assess a complicated effusion from a simple effusion and can also be used to performed arthrocentesis. A Saline load test may be utilized to determine if a wound near a joint communicates with the joint. In the knee, 155 mL of saline is needed to reach 95% sensitivity.

Arthrocentesis and subsequent synovial fluid analysis should be done in all cases of unexplained knee effusion. The aspirated fluid should be analyzed for cell counts, Gram stain, cultures, and crystal analysis. Hemarthrosis is commonly caused by joint trauma. Fat droplets (detected by polarized microscopy) also indicate an articular fracture. Other clotting disorders like hemophilia can cause hemarthrosis in the absence of trauma.

The synovial fluid aspirate should be analyzed for 16):

Poor outcomes may occur in septic arthritis if the patient has any of the following 23):

Risks of delaying treatment beyond 24 to 48 hours include a permanent limitation in joint function and subchondral bone loss. Bacterial invasion can lead to permanent damage to articular cartilage. An infection in a prosthetic joint may result from a local infection that is left untreated and has spread to the prosthesis via blood flow to the area 24).