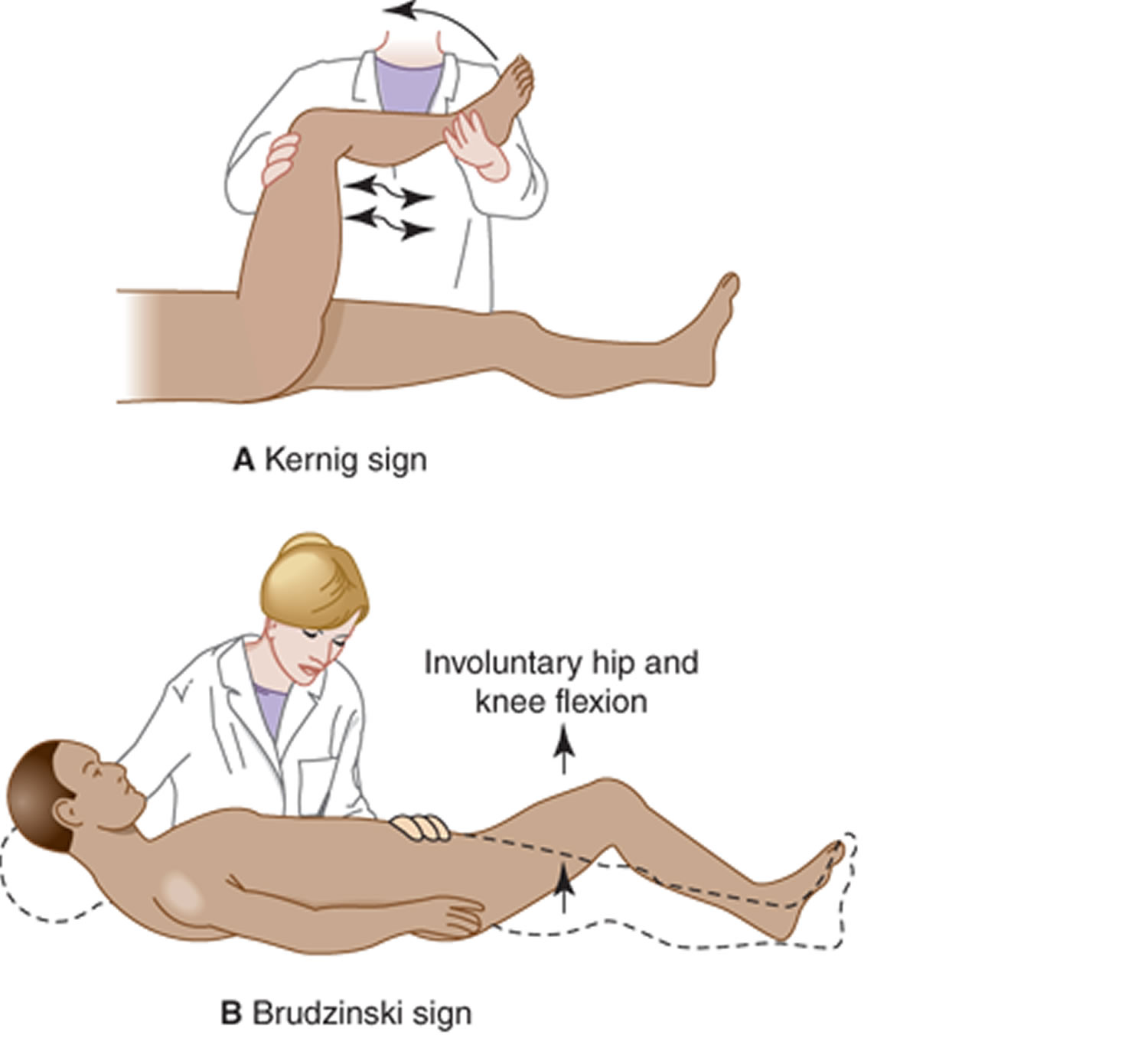 Kernig sign is a clinical sign indicating the presence of meningitis (inflammation of the meninges covering the brain and spinal cord) 1. The test for Kernig sign is done by having the person lie flat on the back, flex the thigh so that it is at a right angle to the trunk, and completely extend the leg at the knee joint. If the leg cannot be completely extended due to pain, this is Kernig sign. This resistance is thought to be due to meningeal inflammation in the setting of meningitis or other clinical entities that may irritate the meninges.

Kernig sign is a severe stiffness of the hamstrings causes an inability to straighten the leg when the hip is flexed to 90 degrees 2.

Brudzinski’s sign is one of the physically demonstrable symptoms of meningitis. Severe neck stiffness causes a patient’s hips and knees to flex when the neck is flexed 3.

Kernig test is also not reliable for patients who are very lethargic, paraplegic, or comatose because these individuals may not have obvious meningeal signs.

The Kernig test is not very sensitive to meningitis, and if absent, does not mean that the patient does not have meningitis. However, if the test is positive, then the test is highly specific for meningitis. Of course, a positive test must be correlated with clinical and laboratory features.

It is important not to rely on the Kernig test for meningitis. If meningitis is suspected, it is mandatory that the infant undergoes a lumbar puncture.

Further, there is no correlation between Kernig sign and the severity of meningeal inflammation.

Bacterial meningitis is an important cause of morbidity and mortality across the world. It is among the top ten infectious causes of death with a mortality rate of 20% to 30%, responsible for 135,000 deaths each year. Physical exam findings, including nuchal rigidity, Kernig, and Brudzinski signs are used at the bedside to help in the diagnosis of cases of suspected meningitis. Several studies have evaluated the utility and accuracy of these bedside exam findings for diagnosing meningitis. Both Kernig sign and Brudzinski sign have a limited role in ruling out meningitis in their absence, with low sensitivities of 5%. However, the signs have specificities of 95% and are considered highly predictive of bacterial meningitis when present in the appropriate clinical setting. The jolt accentuation maneuver, described more recently in 1993, is a bedside maneuver to identify cases of meningitis with exacerbation of a headache caused by rotation of the head horizontally two or three times per second. The jolt accentuation maneuver is one of the most sensitive bedside exam findings with a sensitivity of 97%. 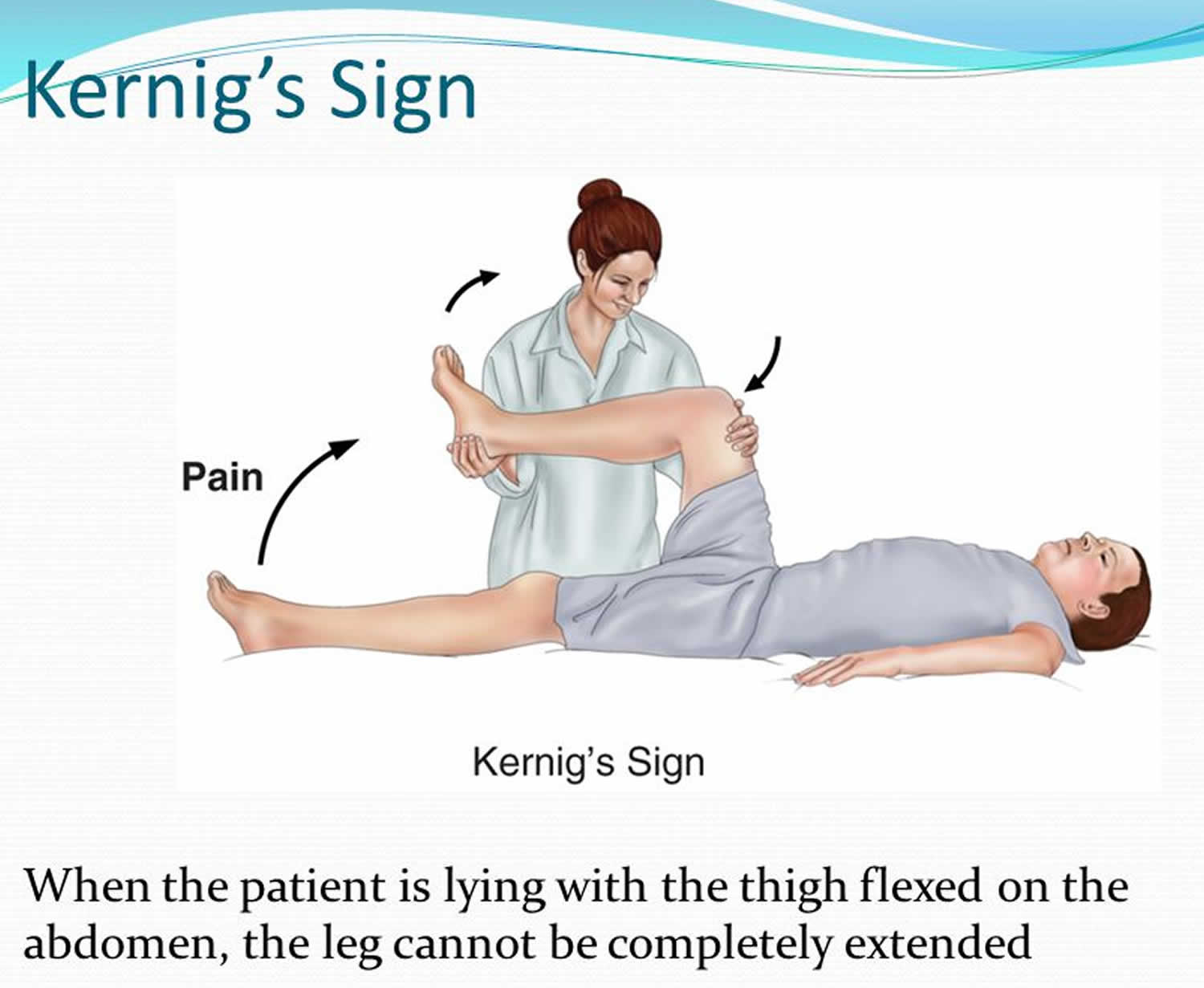 Russian physician Vladimir Kernig described a positive sign as the inability to extend the knees more than 135 degrees 4. In severe cases, patients were unable to extend the knees past 90 degrees. Kernig did not use pain as a marker for a positive test. The presence of contracture or extensor spasm at the knee was considered a positive finding. He noted, however, that the clinical severity of meningitis was not always associated with the severity of contraction of the extremities 5. Since its conception in the 19th century, the clinical value of Kernig sign has been more thoroughly explored. It remains a commonly performed maneuver in cases of suspected meningitis 6.

To elicit Kernig sign, clinicians typically perform the exam with the patient lying supine with the thighs flexed on the abdomen and the knees flexed. The examiner then passively extends the legs. In the presence of meningeal inflammation, the patient will resist leg extension or describe pain in the lower back or posterior thighs, which indicates a positive sign.

Elicitation of Kernig sign often is performed in conjunction with other examination techniques to detect meningitis in symptomatic patients, particularly Brudzinski sign. The Brudzinski nape of the neck sign was described in 1909 by Polish pediatrician Brudzinski. A positive Brudzinski sign refers to the maneuver in which the clinician passively flexes the neck, which then results in flexion of the hips and the knees of the patient 3.

A positive cheek sign is elicited by applying pressure on both cheeks inferior to the zygomatic arch that leads to spontaneous flexion of the forearm and arm 9. A positive symphyseal sign occurs when pressure applied to the pubic symphysis elicits a reflex hip and knee flexion and abduction of the leg. Brudzinski’s contralateral reflex sign consists of reflex flexion of a lower extremity after passive flexion of the opposite extremity 8. Sometimes, a lower limb first placed in flexion causes a reflex movement of extension after the passive flexion of the other limb, known as reciprocal contralateral reflex of Brudzinski.

The most popular maneuver Brudzinski’s neck sign is performed with the patient in the supine position. To elicit this maneuver, the examiner keeps one hand behind the patient’s head and the other on chest in order to prevent the patient from rising. Reflex flexion of the patient’s hips and knees after passive flexion of the neck constitutes a positive Brudzinski sign 10. It has been proposed that in patients with meningitis, passive flexion of the neck stretches the nerve roots through the inflamed meninges, leading to pain and flexion movements of lower extremities. Forward head flexion exerts traction on the intradural spinal nerve roots, which attain maximal relaxation when both hip and knee are placed in intermediate degrees of flexion.

In a quiet environment with the client resting in a supine position: 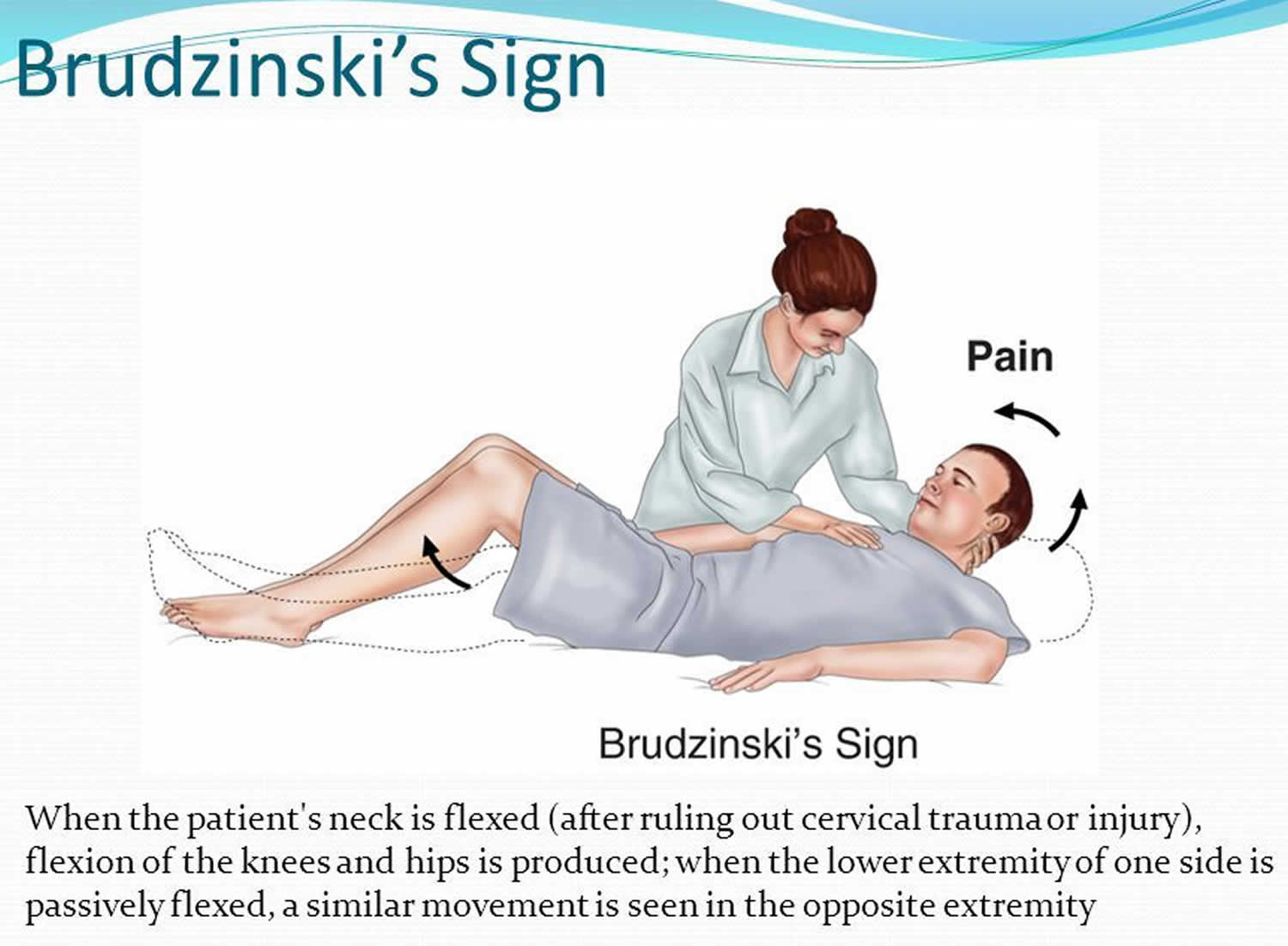 The clinical signs associated with meningitis, including Kernig and Brudzinski signs, also are associated with other diseases. The differential diagnosis in the setting of positive signs includes spinal cord tumors, myelitis, intervertebral disc prolapse, sciatica, multiple sclerosis, trauma, subarachnoid hemorrhage, and increased intracranial pressure from multiple causes or in the setting of stroke. When seen in meningitis, these signs are usually present acutely within 24 hours of symptom onset. It is thought that these findings are due to mechanical factors in the spine. When the meninges in the spinal cord and spinal nerves are inflamed, patients will resist stretching the cord and the nerves to prevent pain resulting from this inflammation. These clinical maneuvers are thought to provoke this stretching. This is why contractures occur when performed, resulting in a positive test 11.

In 1991, a prospective study by Uchihara and Tsukagoshi 12 reported a sensitivity of 9% and specificity of 100% for Kernig’s sign. The sensitivity and specificity was 15% and 100%, respectively, for nuchal rigidity in the same study. A recent study, by Thomas et al. 13 analyzing 297 adults with suspected meningitis, reported a sensitivity of 5% and specificity of 95% for both Kernig’s and Brudzinski’s signs. In a study by Gil Amarilyo 14 in children (2 months to 16 years age group) with meningitis found that Kernig signs had a sensitivity of 27%, specificity of 87% and had relatively high positive predictive values 77%. Surprisingly, sensitivity of both the signs described above for the diagnosis of meningitis has been reported quite low, ranging from 5% to 27%. In a study by Uchihara et al. 12, exclusion of those patients with meningitis who had mental status abnormalities or focal neurological deficits might be the reason for low diagnostic sensitivity. Thomas et al. 13 reported that the sensitivity of meningeal signs are not proportionate to the disease severity in patients with moderate or severe meningeal inflammation or with microbiological evidence of central nervous system infection. Irrespective of disease severity, these meningeal signs may be absent in infants or elderly patients, in immunocompromised or comatose patients. All these factors may account for low sensitivity.

From the figures and studies mentioned above, it is apparent that both, Kernig’s and Brudzinski’s signs, are not very sensitive for detecting meningitis and, therefore, when absent, should not be inferred as there is no evidence of meningitis 2. Although the sensitivity is quite low, the high specificity suggests that if Kernig’s or Brudzinski’s sign is present, there is a high likelihood for meningitis. The two signs, Kernig’s and Brudzinski’s, are often performed together in clinical practice.