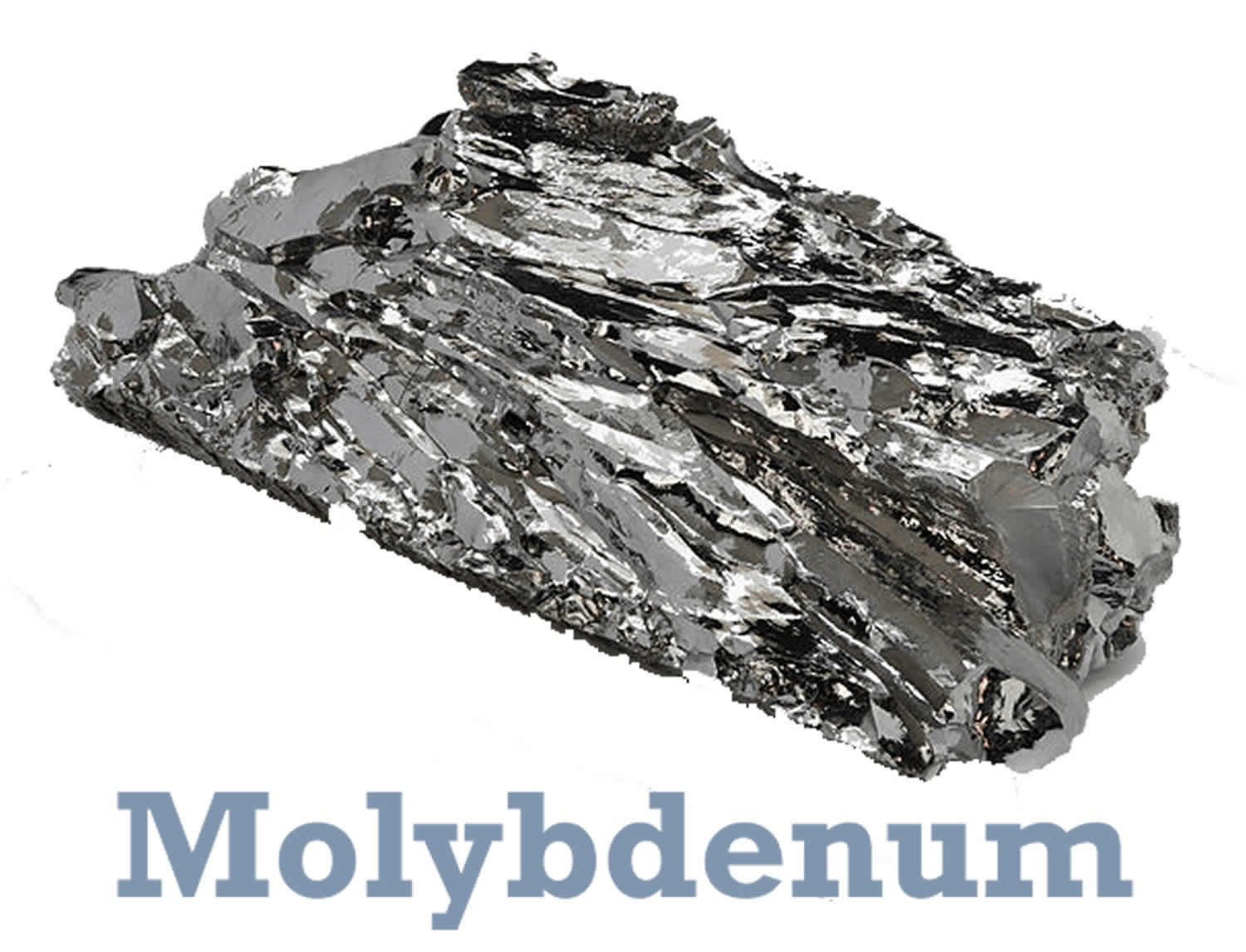 Molybdenum is a heavy metallic element found naturally throughout the environment and is also used by industries to manufacture a wide range of common products. Molybdenum is widely distributed in nature, the abundance in the earth‟s crust being about 1-1.5 mg molybdenum/kg 1). Molybdenum is ubiquitous in food and water as soluble molybdates (Mo(VI)O42-). Molybdenum is required as a component of enzymes involved in the catabolism of sulphur amino acids and heterocyclic compounds, as well as in the metabolism of aromatic aldehydes. Because of its role in metabolism, molybdenum is considered an essential dietary element for mammals, though clinical signs of dietary molybdenum deficiency in otherwise healthy humans have not been described 2). Molybdenum is a refractory metallic element used principally as an alloying agent in steel, cast iron, and superalloys to enhance hardenability, strength, toughness, and wear and corrosion resistance 3). To achieve desired metallurgical properties, molybdenum, primarily in the form of molybdic oxide or ferromolybdenum, is frequently used in combination with or added to chromium, manganese, niobium, nickel, tungsten, or other alloy metals. The versatility of molybdenum in enhancing a variety of alloy properties has ensured it a significant role in contemporary industrial technology, which increasingly requires materials that are serviceable under high stress, expanded temperature ranges, and highly corrosive environments. Moreover, molybdenum finds significant usage as a refractory metal in numerous chemical applications, including catalysts, lubricants, and pigments 4). There is little substitution for molybdenum in its major application in steels and cast irons. In fact, because of the availability and versatility of molybdenum, industry has sought to develop new materials that benefit from its alloying properties.

In humans, molybdenum is also an essential trace element, being a component of the enzymes xanthine oxidoreductase, sulphite oxidase, aldehyde oxidase, nitrate reductase and mitochondrial amidoxime reducing component require molybdenum linked with a pterin (molybdopterin) as the cofactor 5). These enzymes are involved in the metabolism of aromatic aldehydes and the catabolism of sulphur-containing amino acids and heterocyclic compounds, including purines, pyrimidines, pteridins and pyridines.

Molybdenum-containing enzymes catalyse redox reactions and are found in many plants and animal organisms. As a consequence of the easy interconvertibility of different oxidation states (Mo4+/Mo6+), molybdenum-containing enzymes have the ability to provide electron transfer pathways. In addition to molybdenum, they also contain other prosthetic groups such as flavin adenine dinucleotide or haeme 6).

The US Institute of Medicine 9) derived an average requirement based on a molybdenum balance study with four young males by Turnlund et al. 10). Average molybdenum balance was achieved with an intake of 22 μg/day, and no clinical signs of deficiency or biochemical changes associated with molybdenum deficiency were observed. The average minimum molybdenum requirement for maintaining adequate molybdenum status was estimated to be 22 μg/day, to which an additional 3 μg/day was added to allow for miscellaneous losses. In addition, it was assumed that molybdenum bioavailability from some diets may be lower than from the diet provided in the study. Thus, an average bioavailability of 75 % was used to set an Estimated Average Requirement (EAR) of 34 μg/day. Because of the use of only two different molybdenum intake levels and the small size of the study, US Institute of Medicine 11) used a coefficient of variation of 15 % and derived a Recommended Dietary Allowance (RDA) of 45 μg/day as the Estimated Average Requirement (EAR) plus twice the coefficient of variation to cover the needs of 97 to 98 % of the individuals in the group. As no data on which to base an Estimated Average Requirement (EAR) were found for women or older adults, the same values were given for these population groups 12). 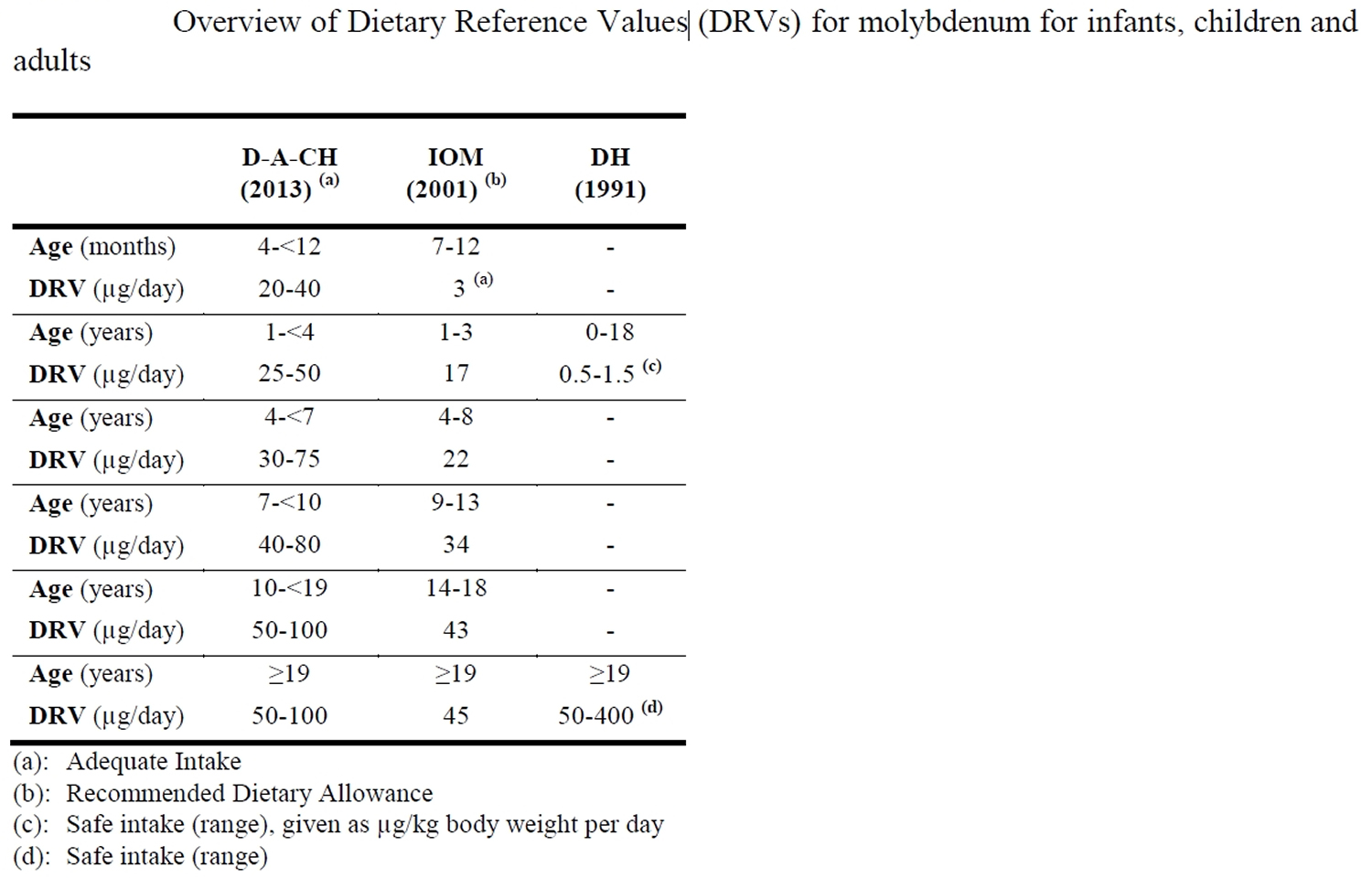 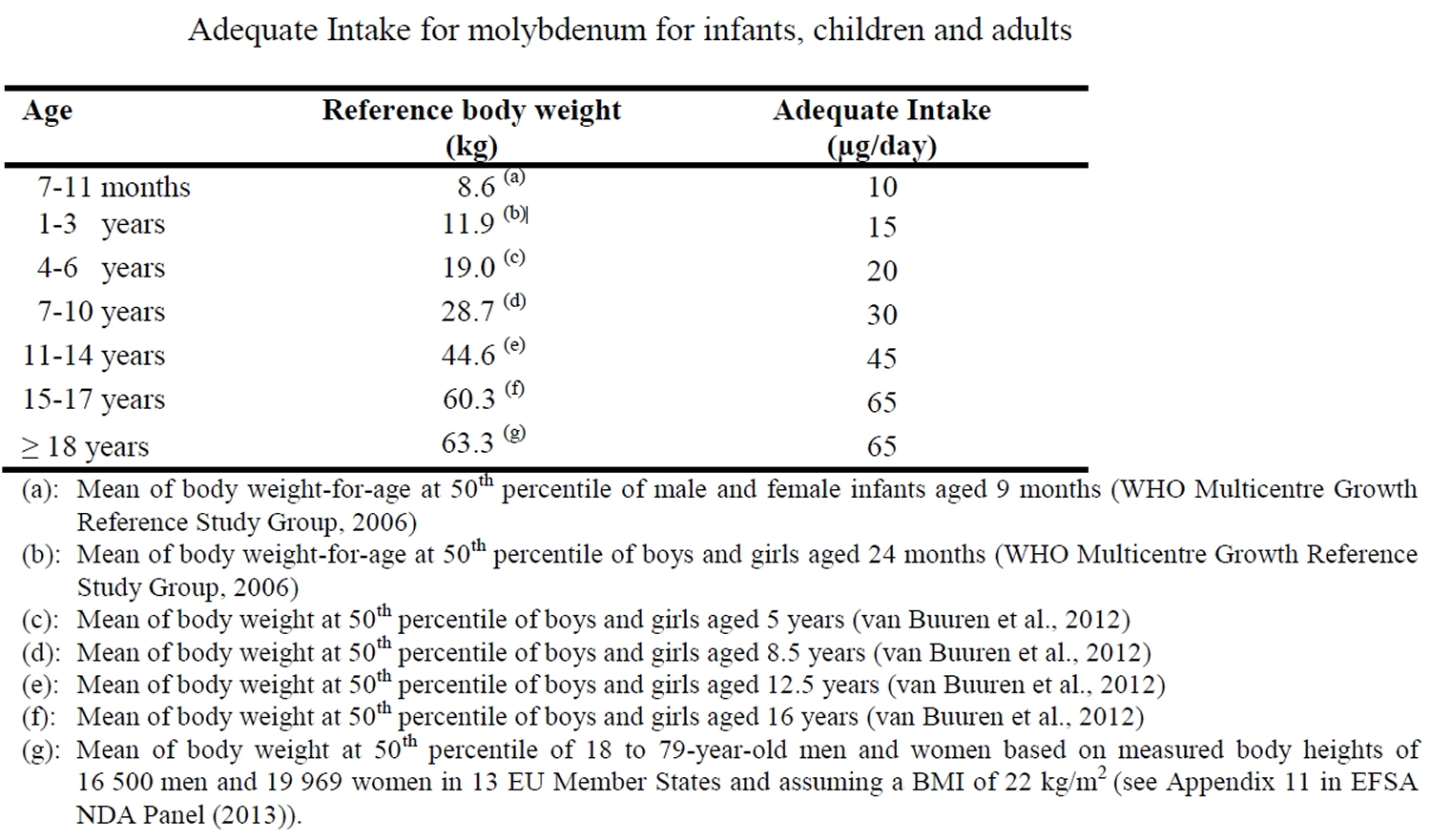 The Scientific Committee on Food has set a Tolerable Upper Intake Level (UL) based on adverse effects of molybdenum on reproduction, particularly fetal development, shown in studies with rats and mice, from which a No Observed Adverse Effect Level (NOAEL) of 0.9 mg/kg body weight per day was derived. Using an uncertainty factor of 100, a UL of 0.01 mg/kg body weight per day, equivalent to 0.6 mg/day, was derived for adults, including pregnant and lactating women. For children from one year of age onwards, the UL was extrapolated from the adult UL on a body weight basis, and was set at between 0.1 and 0.5 mg/day 15).

Molybdenum is relatively nontoxic, although high levels may be a cause of high uric acid levels and an increased incidence of gout. Liver toxicity from molybdenum has not been described 16). However,


Molybdenum is present in nearly all foods in trace amounts as soluble molybdates.

Foods high in molybdenum are:

Infant and follow-on formula: In a report on the essential requirements of infant and follow-on formulae, the SCF did not define a minimum or maximum content of molybdenum for either type of formulae 22). Compared to mature human milk, cow‟s milk has a higher molybdenum concentration [34 μg/kg as reported by Rose et al. 23), mean of 46 μg/kg as reported by Anses 24)]. Hence, the molybdenum content of cow’s milk based-infant formula is higher compared to mature human milk. For 81 powdered cow’s milk-based or soy-based infant formulae from the US and Canada, molybdenum concentrations ranged from 15.4 to 80.3 μg/L (mean ± SE, 37.7 ± 1.7 μg/L) 25).

Water-soluble molybdates are efficiently and rapidly absorbed from the digestive tract at a wide range of intakes, and the body is able to adapt to this wide intake range by regulating excretion via the urine. At doses up to about 1 mg, molybdenum dissolved in water is completely absorbed into the systemic circulation. Molybdenum absorption in the presence of solid foods (cress, green salad, tomatoes, bean soup) is lower compared to administration with water 26). When added to a beverage containing starch, dextrimaltose, oil, sucrose, α-cellulose and minerals, the absorption efficiency of increasing doses of molybdenum ranging from 24 to 1 378 μg was between 90 and 94 % in healthy men 27). Black tea has been shown to considerably reduce molybdenum absorption upon ingestion of relatively high amounts of molybdenum (0.5-1 mg as a single dose of stable isotope) 28). In ten premature infants, absorption of the stable isotope molybdenum from infant formula was 97.5 % (96.3-99.1 %) after receiving 25 μg molybdenum/kg body weight 29).

Little is known about the mechanism of molybdenum absorption and the site of absorption in the gastrointestinal tract. In animals, molybdenum (VI) but not molybdenum (IV) is readily absorbed from the duodenum and proximal jejunum 33). Recently, a family of proteins probably related to molybdate transport in animals and humans has been described, though the exact location of this high-affinity transporter within the cell has not yet been identified 34). It is assumed that in addition to a possible high-affinity uptake system, molybdate may also enter the cell nonspecifically through the sulphate uptake system, which has been shown to be present in plants 35).

Tungsten is known to inhibit molybdenum uptake, and this inhibitory effect has been used in animal studies to induce molybdenum deficiency, but it is not considered relevant for humans because of the rare occurrence of tungsten in the environment and consequently in the food chain 36). In sheep and rats, high sulphate intakes have been shown to inhibit molybdenum absorption, suggesting that both sulphate and molybdenum share a common transport mechanism 37). An interaction with copper has been observed leading to copper deficiency in sheep exposed to high molybdenum intake. In ruminants, excessive intakes of molybdenum lead to formation of thiomolybdate in the sulphide-rich environment of the rumen; thiomolybdate (a molecule where sulphur groups surround a molybdenum centre) is a chelator of copper ions, thereby inhibiting copper absorption 38). By contrast, in humans, clinical symptoms of copper deficiency are largely confined to individuals with rare genetic defects in copper metabolism 39). In four adult males on two sorghum diets providing daily 2.4 mg of copper and 166 μg or 540 μg of molybdenum, respectively, fecal copper excretion was comparable and apparent copper absorption unaffected by molybdenum intake 40).

In order to fulfill its biological role, molybdenum must enter the cell and be assembled into a molybdenum cofactor. In eukaryotes, the molybdate transport process and the proteins involved are not fully understood 47).

There are no suitable biomarkers of molybdenum status. Biochemical changes observed in subjects with molybdopterin cofactor deficiency, a genetic disorder, or in the one subject reported with possible molybdenum deficiency, have not been observed in healthy individuals on varying levels of molybdenum intake. Low activity of molybdoenzymes in tissues, or changes in substrate/product relationships, are considered as insufficiently specific to be used as biomarkers of status.

Various balance studies have been performed to establish molybdenum requirements. However, only one balance study in adults was considered to be of sufficient duration, and was performed with a constant diet and under controlled conditions. In this study carried out in four men, balance was reported to be near zero from day 49 until day 102 of the depletion period when intakes were as low as 22 μg/day 48). Biochemical changes or symptoms suggestive of molybdenum deficiency were not observed and the possibility that humans may be able to achieve molybdenum balance at even lower intakes cannot be excluded 49). Results of two balance studies with some methodological limitations were reported in children, but these studies cannot be used to derive an average molybdenum requirement for children. Data on molybdenum intakes and health outcomes were unavailable for the setting of DRVs for molybdenum.

As the evidence to derive an Average Requirement and thus a Population Reference Intake, was considered insufficient, an Adequate Intake (AI) is proposed. An Adequate Intake (AI) of 65 μg/day is proposed for adult men and women based on mean molybdenum intakes at the lower end of the wide range of observed intakes from mixed diets in Europe 50). Given the scarcity of data on molybdenum intakes in pregnant and lactating women, it is suggested that the adult Adequate Intake (AI) also applies to pregnant and lactating women 51). For infants from seven months and children, it was decided that an Average Requirement could not be established, and an Adequate Intake (AI) is proposed based on extrapolation from the adult AI using isometric scaling and reference body weights of the respective age groups. The respective AIs vary between 10 μg/day in infants aged 7-11 months and 65 μg/day in adolescent boys and girls 52).

In humans, only a single case report of a syndrome suggestive of dietary molybdenum deficiency in a patient on total parenteral nutrition for several months has been reported 54). A 24-year-old male patient with Crohn’s disease and short bowel syndrome was on total parenteral nutrition (TPN) lacking in molybdenum for 12 months, at which point he developed a syndrome characterized by tachycardia, tachypnea, severe headache, nausea and vomiting, night blindness, and central scotomas, which progressed to edema, lethargy, disorientation and coma 55). These symptoms were associated with high plasma methionine and low serum uric acid concentrations, as well as reduced urinary concentrations of sulphate, thiosulphate, and uric acid. Whilst modification of the total parenteral nutrition solution by lowering the sulphur load was ineffective, treatment with ammonium molybdate (300 μg/day) resulted in considerable improvement of the clinical symptoms and progressive reversal of the biochemical abnormalities within 30 days 56). Clinical signs of molybdenum deficiency in otherwise healthy humans have not been observed 57).

A distinct molybdenum deficiency syndrome has not been observed in animals when subjected to molybdenum restriction, despite considerable reduction in the activity of molybdoenzymes.


Animal data: No fatalities were reported among animals that ingested amounts of molybdenum disulfide in doses as great as 6,000 mg molybdenum/kg 62). No changes were observed in rats over a 4-week period following inhalation exposures to metallic molybdenum at 25,000 to 30,000 mg/m3 or to molybdenum dioxide at 10,000 to 12,000 mg/m3 for 1 hour 63).

The available toxicological data contain no evidence that an acute exposure to a high concentration of insoluble molybdenum compounds would impede escape or cause any irreversible health effects within 30 minutes. However, the revised Immediately Dangerous to Life or Health Concentrations for insoluble molybdenum compounds is 5,000 mg Mo/m3 based on being 500 times the Occupational Safety and Health Administration permissible exposure limit (legal limit in the United States for exposure of an employee to a chemical substance) of 10 mg molybdenum/m3 (500 is an assigned protection factor for respirators and was used arbitrarily during the Standards Completion Program for deciding when the “most protective” respirators should be used for particulates).