One and a half syndrome

One and a half syndrome

The diagnoses of one-and-a-half syndrome and its spectrum disorders rely on distinctive clinical symptoms, neuroanatomy, especially imaging technologies 5). Other associated symptoms including visual impairment, impaired swallowing and fine motor deficits may contribute to locating the lesions. The treatment depends on the causes of the syndrome. 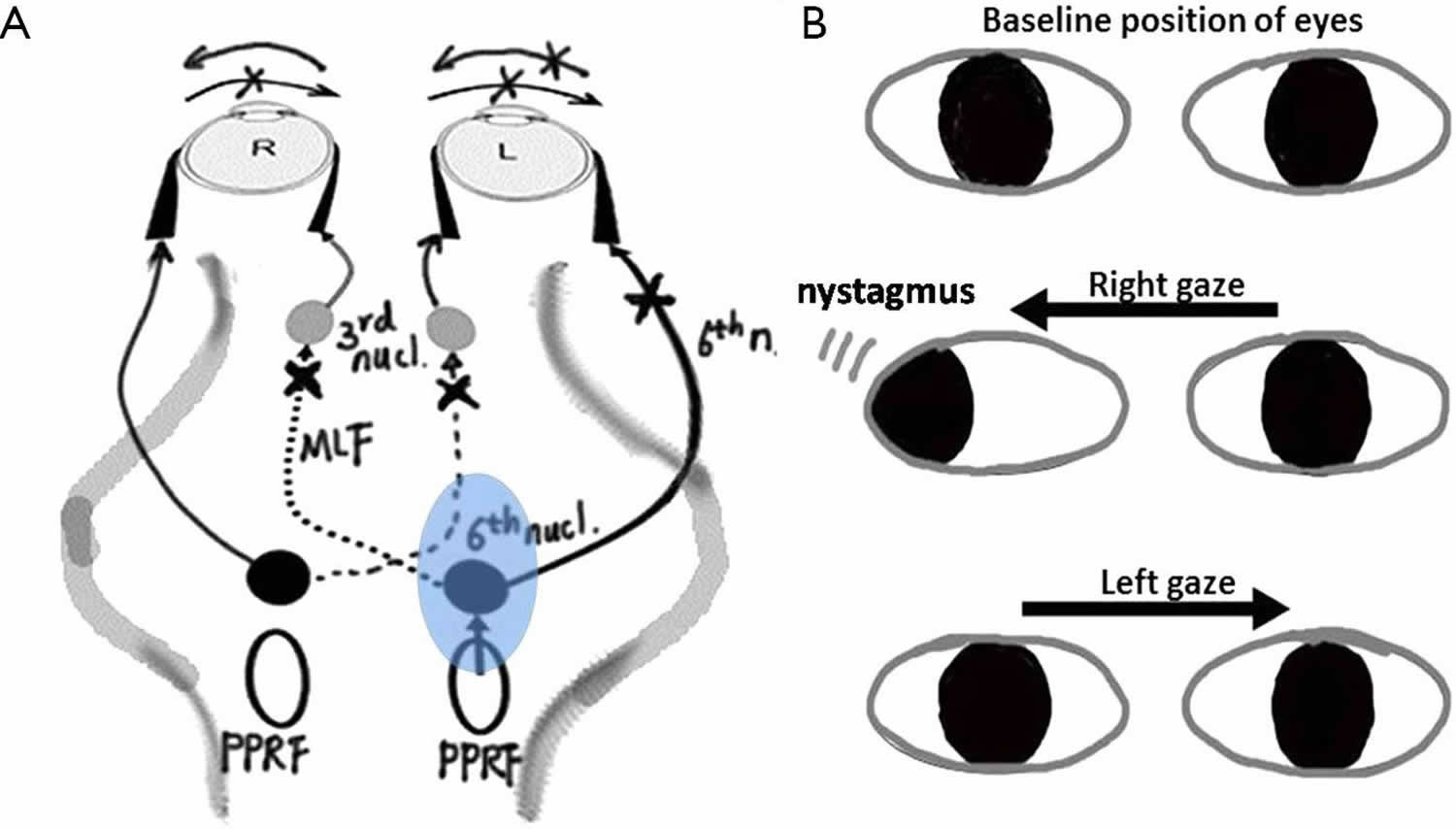 Footnote: Diagram showing the mechanism for one-and-a-half syndrome. (A) Pathologic lesion (blue oval shaded area) in the dorsal pontine tegmentum involves both the left ipsilateral paramedian pontine reticular formation (PPRF) (or the left abducens nucleus) causing an ipsilateral complete conjugate horizontal gaze palsy and affecting the left medial longitudinal fasciculus (MLF) causing an ipsilateral internuclear ophthalmoplegia (INO). Only contralateral abduction is spared. (B) Position of eyeballs, with rightward gaze, the left eye has the impaired adduction, while the abduction of the right eye is intact, except for the nystagmus, and with left gaze, both eyes have impaired horizontal movement (abduction of the left eye and adduction of right eye).

Footnote: A 43-year-old male patient presented with chief complaint of sudden onset, progressively worsening binocular diplopia in the right eye for the preceding 1 month. No history of any trauma or similar complaint was elicited in the past. The patient was found to be adequately built, with vital signs being normal and had no evidence of systemic abnormality. On ocular examination, best-corrected distance visual acuity and near vision in both the eyes were 6/6 and N6, respectively. Anterior and posterior ocular segment evaluation was unremarkable. Although the eyes were aligned in primary position, horizontal gaze palsy was noted with loss of saccades and pursuit movements in levoversion. On attempted dextroversion, the right eye was abducting with associated abduction nystagmus, in the absence of left eye adduction. Both vertical gaze and convergence were normal. Based on ocular findings, the diagnosis of ipsilateral one-and-a-half syndrome was made. Magnetic resonance imaging (MRI) was advised following clinical evaluation, which revealed an irregular complex cystic enhancing space-occupying lesion measuring 42 mm × 39 mm × 35 mm, in the region of fourth ventricle closely abutting the brain stem posteriorly (Figure 3A and B). Multiple small ring and disc enhancing lesions were also seen in the bilateral cerebellar hemispheres and right occipital lobe. Radiological findings suggested brain metastasis. Further evaluation was supplemented with 18F-fludeoxyglucose positron emission tomography/computed tomography (CT) imaging to locate the primary pathology. Abdominal CT scans showed primary neoplastic lesion, arising from the upper pole of the right kidney and another exophytic mass in the lower pole of the left kidney. In addition, metastatic lesions in the right adrenal gland, pancreas, and brain were seen. Based on examination and investigations, diagnosis of Stage 4 renal cell carcinoma (inoperable) with brain metastasis with associated ipsilateral one-and-a-half syndrome was made. The patient was shifted to oncology department and started on palliative radiotherapy after sorting consultation for the same.

Figure 3. One and one half syndrome MRI of patient 1

Eight-and-a-half syndrome is characterized by one-and-a-half syndrome with the seventh cranial nerve damage 9). In eight-and-a-half syndrome, patients presented sudden onset of horizontal diplopia and right facial paralysis. The primary eye position was normal. The patient had combination of the right gaze paresis, along with impaired adduction in right eye and abduction with nystagmus in the left eye 10). The vertical movements of two eyes were normal, with right peripheral facial paralysis. It is clear that the eight-and-a-half syndrome lesions are located in the ipsilateral paramedian pontine reticular formation (PPRF), MLF, facial nerve nucleus or nerve bundle. Or the lesions damaged ipsilateral abducens nucleus, medial longitudinal fasciculus (MLF), facial nerve nucleus or nerve bundle. Therefore, the lesion is easily located in the ipsilateral pontine tegmentum.

The head MRI T2-weighted image showed a high signal at the right paramedian pontine tegmentum. According to the patient’s signs and head MRI, the damaged sites were considered in the right abducens nucleus, right medial longitudinal fasciculus (MLF) and right facial nerve (Figure 4A). The paracentral artery occlusion of pons was considered in this case.

Figure 4. 8 and half syndrome 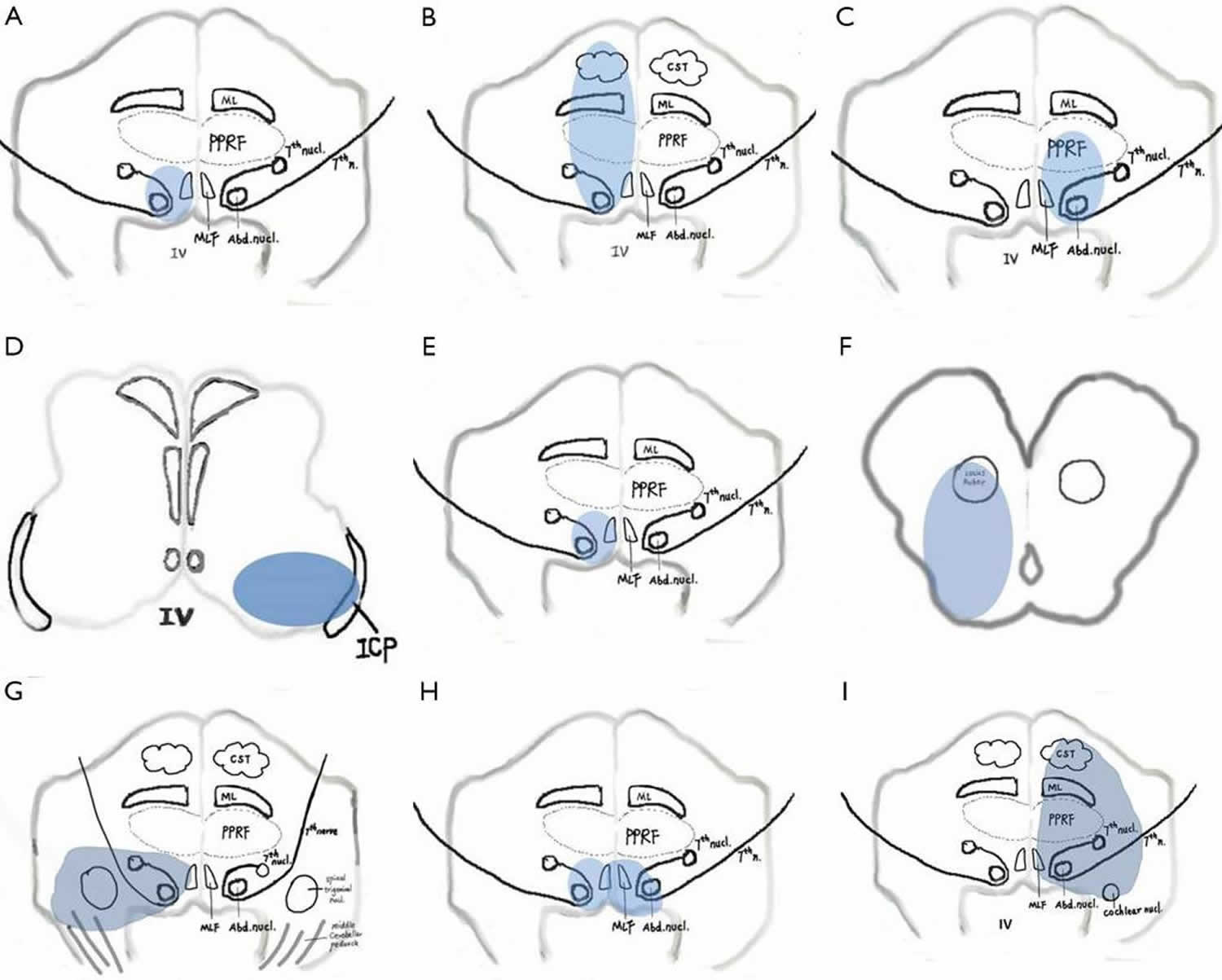 The abducens nucleus is located in colliculus facialis, which is in the lower part of the pons and the bottom of the fourth ventricle 17). It contains two functionally distinct cell groups: the abducens motoneurons that innervate the lateral rectus muscle; the internuclear neurons which axons cross the midline and ascend via the contralateral MLF to oculomotor subnucleus and control the medial rectus 18). Therefore, the unilateral lesion of the abducens nucleus will also produce ipsilateral horizontal gaze paralysis.

Medial longitudinal fasciculus (MLF) are the longitudinal nerve fibers that locate on the back of the pons and are close to the front of the fourth ventricle, a part of which relating to horizontal gaze is from the side of the abducens nucleus to the contralateral oculomotor subnucleus 19). The lesion of unilateral pontine tegmentum can damage the ipsilateral MLF, causing the ipsilateral internuclear ophthalmoplegia (INO), and its clinical manifestations show the ipsilateral intraocular muscle paralysis and contralateral horizontal nystagmus when staring at the opposite side. If the damage does not involve the midbrain, the convergence reflex is integrated 20).

One and a half syndrome causes

The most common cause of one-and-a-half syndrome was cerebrovascular disease, and usually was brain stem lacunar infarction, followed by the demyelinating etiology (multiple sclerosis), and then the infectious cause including neurocysticercosis and brainstem encephalitis 27). Other uncommon causes were head trauma, brain stem tumor (primary or metastasis), astrocytomas, etc. 28). Therefore, the vast majority of one-and-a-half syndrome companied by other positioning signs is due to the different lesions of brainstem 29). Only a very small number of patients showed isolated one-and-a half syndrome, while the lesions are smaller and localized, such as brainstem cysticercosis 30), brainstem tuberculosis 31), brainstem cavernous hemangioma (cavernomas) 32) and the local hemorrhagic infarction of brainstem 33).

One and a half syndrome symptoms

The most common symptom of one-and-a-half syndrome is diplopia. Further questioning will likely yield a description of binocular, horizontal diplopia that is worse with contralateral gaze. Other complaints include blurred vision, oscillopsia, difficulty looking to the affected side, and a ‘quivering’ eye 34).

One and one half syndrome symptoms:

Depending on the etiology, size, and location of the lesion, other neurological findings may be noted on physical exam. Inclusion of cranial nerves II, V, VII, VIII, IX, and XII were detected in Wall and Wray’s 1983 case and literature review 35). Other findings included Horner syndrome, weakness or spasticity, sensory deficits, abnormally brisk or asymmetric reflexes, extensor plantar responses, and incoordination  36). Additionally, when the facial motor nucleus is simultaneously affected, a central facial palsy can be seen, and such cases have been deemed “eight-and-a-half syndrome” 37). Other interesting associations with one-and-a-half syndrome include oculopalatal myoclonus 38) and Cheirooral syndrome 39).

One and a half syndrome diagnosis

A full ocular motility exam, including convergence, should be performed. In one-and-a-half syndrome, the apparent adduction deficits can be overcome with convergence. Forced ductions may be helpful to rule out a restrictive palsy. A neurological exam with attention to the cranial nerves may help you further localize a lesion. Consider thyroid function testing, myasthenia gravis antibody testing, or in-office endrophonium testing if thyroid eye disease or myasthenia gravis are a clinical concern. Adduction deficits due to myasthenia gravis cannot be overcome by convergence. Neuro-imaging is indicated, with MRI being the modality of choice.

One and a half syndrome treatment

Treatment, management, and prognosis depend on the underlying cause of the one and one half syndrome. Collaboration with neurology or neurosurgery may be necessary.