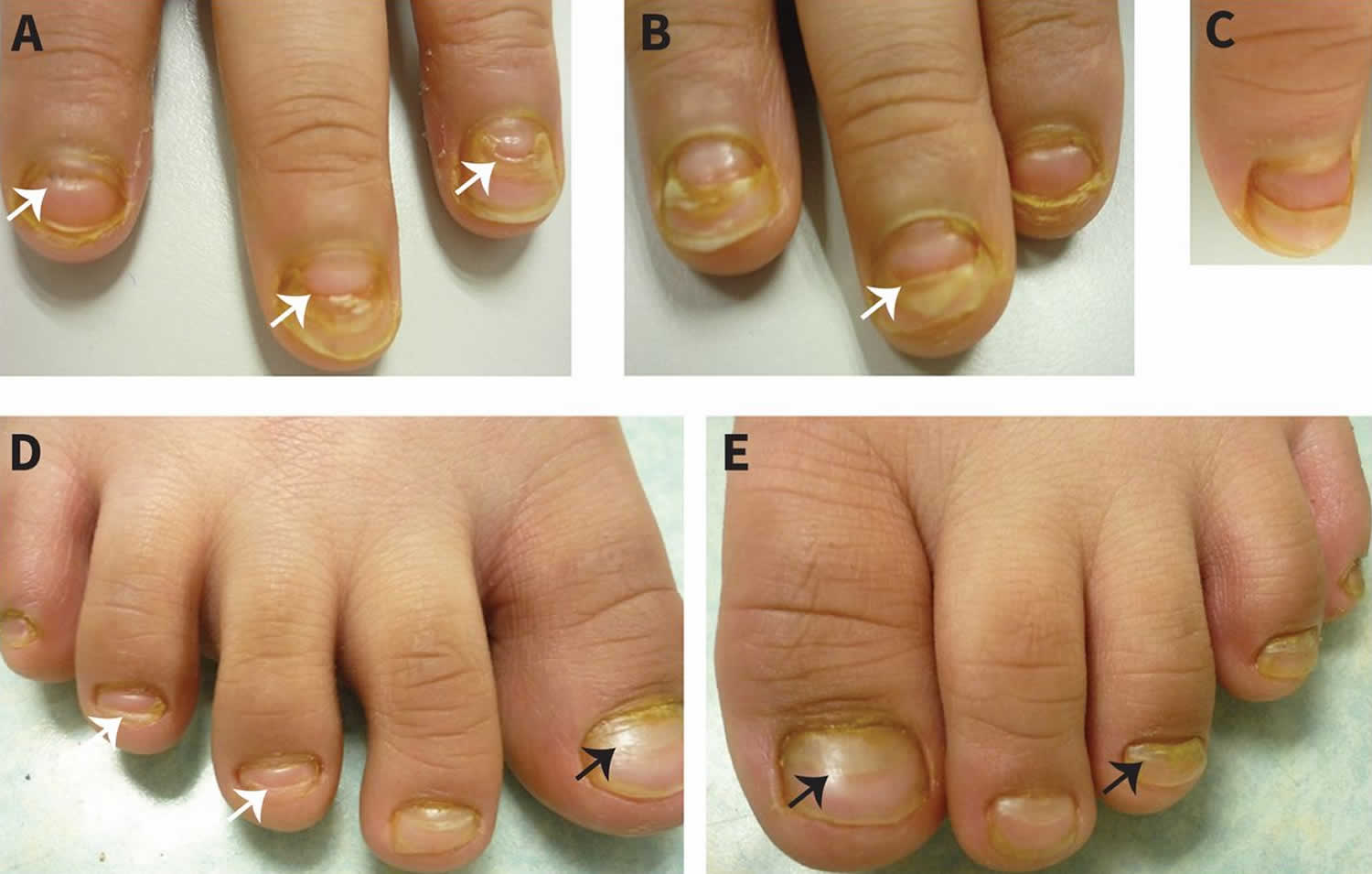 Onychomadesis is nail shedding (loss of nail) beginning at the proximal end, possibly caused by the temporary arrest of the function of the nail matrix, and can affect both fingernails and toenails 1). Onychomadesis is a rare disorder in children, and cases were considered to be idiopathic or acquired 2). Most commonly, onychomadesis has been reported in association with pemphigus vulgaris and hand–foot–mouth disease and following chemotherapy or antiepileptic medications 3). Hand–foot–mouth disease viruses are potential risk factors of onychomadesis in children 4). Onychomadesis after hand–foot–mouth disease was first reported in five children in Chicago, USA, 2000 5). Hand-foot-mouth disease is a common illness of children (mainly affecting children older than five years), characterized by fever and vesicles involving the hands, feet and mouth 6). Variable strains of viruses are known to be related, such as coxsackievirus A5, A6, A7, A9, A10, A16, B1, B2, B3, B5; echoviruses E3, E4, E9; and enterovirus 71 7). Enterovirus 71 and coxsackievirus A16 are the most common causative agents among a dozen enteroviruses associated with hand–foot–mouth disease 8). Onychomadesis is a late complication that occurs four to six weeks after the illness onset 9). It is usually self-limited and requires no treatment 10). Nail abnormalities range from leukonychia and Beau lines to partial or complete nail shedding 11). The recise mechanism of onychomadesis associated with hand-foot-and-mouth disease is incompletely understood. Several hypotheses have suggested it may involve brief inhibition of nail-matrix proliferation caused by fever, periungual inflammatory reactions or enteroviruses affecting the nail matrix more directly 12).

Conditions that can cause onychomadesis include idiopathic, severe systemic diseases, nutritional deficiencies, trauma, periungual dermatitis, chemotherapy, fever, drug ingestion, anticonvulsants and infection 15). Nail matrix arrest with fever, infection, systemic disease or drug exposure can be explained by inflammation in the periungual and matrix regions, inhibition of cellular proliferation, alteration in the quality of manufactured nail plate, and nerve injury or dysfunction 16).

The mechanism of onychomadesis after hand–foot–mouth disease is not fully understood. However, viral infection is responsible for onychomadesis, as a temporal latency exists between hand–foot–mouth disease and onychomadesis. Bettoli et al. 21) reported that inflammation secondary to viral infection around the nail matrix may be induced directly by viruses or indirectly by virus-specific immunocomplexes and consequent distal embolism, and Cabrerizo et al. 22) suggested that virus replication directly damage the nail matrix, based on the presence of coxsackievirus 6 in shed nails. Because fingernails with onychomadesis are not always of the fingers affected by hand–foot–mouth disease, an indirect effect of viral infection on the nail matrix is more plausible. Onychomadesis can also occur on toenails; however, it is less frequent even when vesicles were present on the feet previously. Whether this is due to less frequent detection or a different mechanism is not known.

Depending on the underlying cause, there may be involvement of a single nail or multiple nails. Nag et al noted that onychomadesis was most commonly observed in nails of the middle finger (73.7%), followed by the thumb (63.2%) and ring finger (52.6%). Fingernails are more commonly involved than toenails.

The diagnosis of onychomadesisis made clinically. Distinct nail changes can be detected by inspection and palpation of the nail plate.