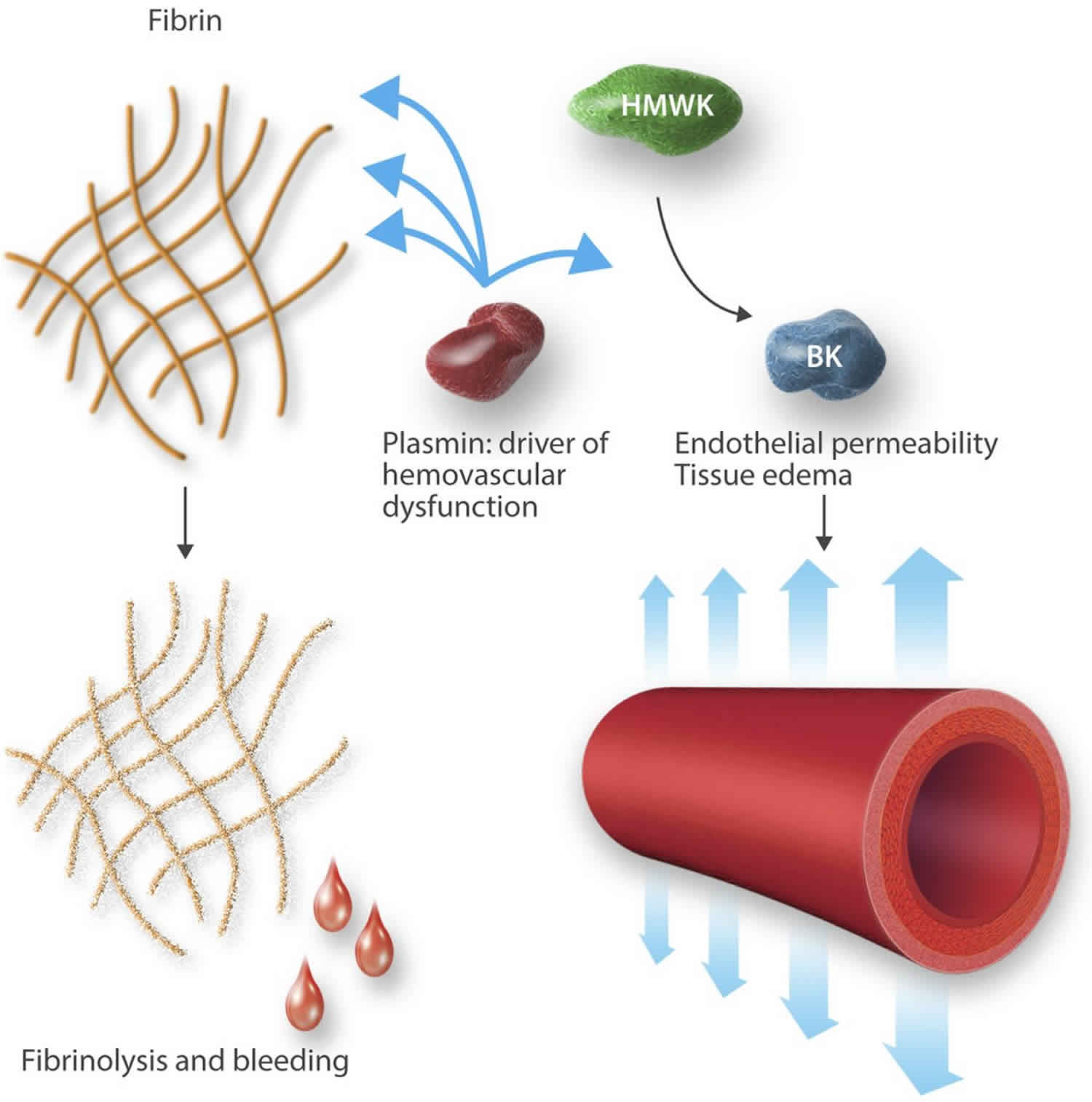 Plasminogen is converted to plasmin via cleavage of the Arg561-Val562 peptide bond 2) by either tissue-type plasminogen activator (tPA) or urokinase-type plasminogen activator (uPA). The cleavage results in generation of the N-terminal α chain, containing five kringle domains with lysine-binding sites, and the β chain, containing the catalytic triad of His603, Asp646, and Ser741 3). Produced by the liver, plasminogen circulates at relatively high concentrations (approximately 2 μM), making it an abundant zymogen in plasma and also in interstitial fluids, where its concentration can be increased upon inflammation or injury through exudation from the vascular system 4). Therefore, plasminogen activation by its specific activators is one of the ways to efficiently regulate plasmin functions. In the blood stream, plasminogen is activated mainly by tPA (tissue-type plasminogen activator), generating the enzyme responsible for lysis of fibrin clots. In wounded tissues undergoing repair or in the tumor microenvironment undergoing constant remodeling, plasmin is generated through urokinase-type plasminogen activator (uPA)-mediated activation 5). The enhanced expression of single-chain pro-uPA by cancer cells and the ability of malignant tumor cells to activate pro-uPA into the two-chain, catalytically active uPA 6), as well as regulation of uPA activity by the specific inhibitors, PAI-1 and PAI-2 7), are all critical factors in plasmin generation and consequently, regulation of plasmin-mediated cell functions. A unique mechanism for plasminogen activation involves microparticles which are produced by endothelial cells under stress conditions and provide abundant surface for uPAR/uPA-mediated plasmin generation 8).

Plasmin is involved in various physiological processes, including embryo development, thrombolysis (break the clot [thrombus] into small pieces so that it can be removed), wound healing and cancer progression 9).

The fibrinolytic system functions to dissolve fibrin, one of the main products of thrombin activity. Within this system, plasmin, serves as the major protease, utilizing fibrin contained within clots as a substrate for proteolysis and producing soluble products and thus maintaining the patency within the vascular system 10). The precursor to plasmin, plasminogen, serves as zymogen produced by the liver, circulates throughout the endovascular network and participates in the fibrinolytic pathway serving as both a catalytic enzyme to initiate the process of fibrinolysis, as well as a substrate, which once cleaved to become plasmin, continues on the process of fibrinolysis at an accelerated rate (see Figure 1 below). This conversion from plasminogen, to plasmin is highly regulated and involves several different circulating factors as well as feedback mechanisms from the substrate products 11). Regulation of the activation of plasminogen functions to control the homeostasis between fibrin deposition and fibrinolysis particularly in the setting of hemostasis. This regulation is resultant from the molecular structure of plasminogen, its conformational state, the interactions between plasminogen and fibrin, plasminogen activators, inhibitors of activation and the effects of plasmin during fibrinolysis which initiates a positive feedback mechanism.

The most physiologically active plasminogen activator is tissue plasminogen activator (tPA), its production and secretion are predominantly from endothelial cells 12). The endothelial release of tPA gets triggered by numerous local stimuli, including shear stress, thrombin activity, histamine, and bradykinin 13). When synthesized, tPA, contains five structural domains, of these domains which include a fibronectin finger domain, two kringle domains, which are homologs to the kringle structures found in plasminogen, an epidermal growth factor analog, and a serine protease domain 14). tPA production occurs first as a single chain protein, and in this single chain form, its affinity for plasminogen decreases. Once plasmin has been produced, plasmin works in a positive feedback mechanism, cleaving tPA into its two-chain form. This form has a 10-fold increase in affinity for converting plasminogen into plasmin and accelerates the rate of conversion 15). In a normal patent lumen, tPA remains suppressed via a molar excess of its inhibitor, plasminogen activator inhibitor-1 (PAI-1) 16). In the presence of fibrin, both plasminogen and tPA can bind, the concentration-dependent inhibitory effect of PAI-1 is lost, and tPA is brought in close enough proximity to cleave plasminogen into active plasmin. This activation occurs through cleavage of an Arg-Val peptide bond within plasminogen giving rise to the active protease, plasmin 17). This cleavage event is the similar activating step for all the different activators of plasminogen, of which tPA is the most ubiquitous.

Once activated, mechanisms exist within the plasma to degradant the plasmin response. Inhibition of plasmin occurs by alpha-antiplasmin which is a member of the serpin protein family, alpha-antiplasmin circulates within the plasma at a relatively high concentration to inhibit the activity of plasmin.[1] Concurrently mechanisms exist to decrease the activity of tPA and uPA, which is accomplished by the action of two other members of the serpin family, plasminogen activator inhibitor-1(PAI-1) and plasminogen activator inhibitor-2 (PAI-2) 21).

Indications for the use of tPA (tissue-type plasminogen activator) include the following:

Plasminogen activator inhibitor 1 (PAI 1) eventually terminates the catalytic activity of tissue plasminogen activator (tPA) by binding to it, and this inactive complex (PAI 1-bound tPA) is removed from the circulation by the liver, more specifically via the scavenger receptor, LDL receptor-related protein 1 (LRRP1) 26). In the nervous system, a neuronal-specific inhibitor of tPA, neuroserpin, acts similarly to PAI 1, and the inactive tPA-neuroserpin complexes are internalized by the LRRP1 for removal from circulation 27).