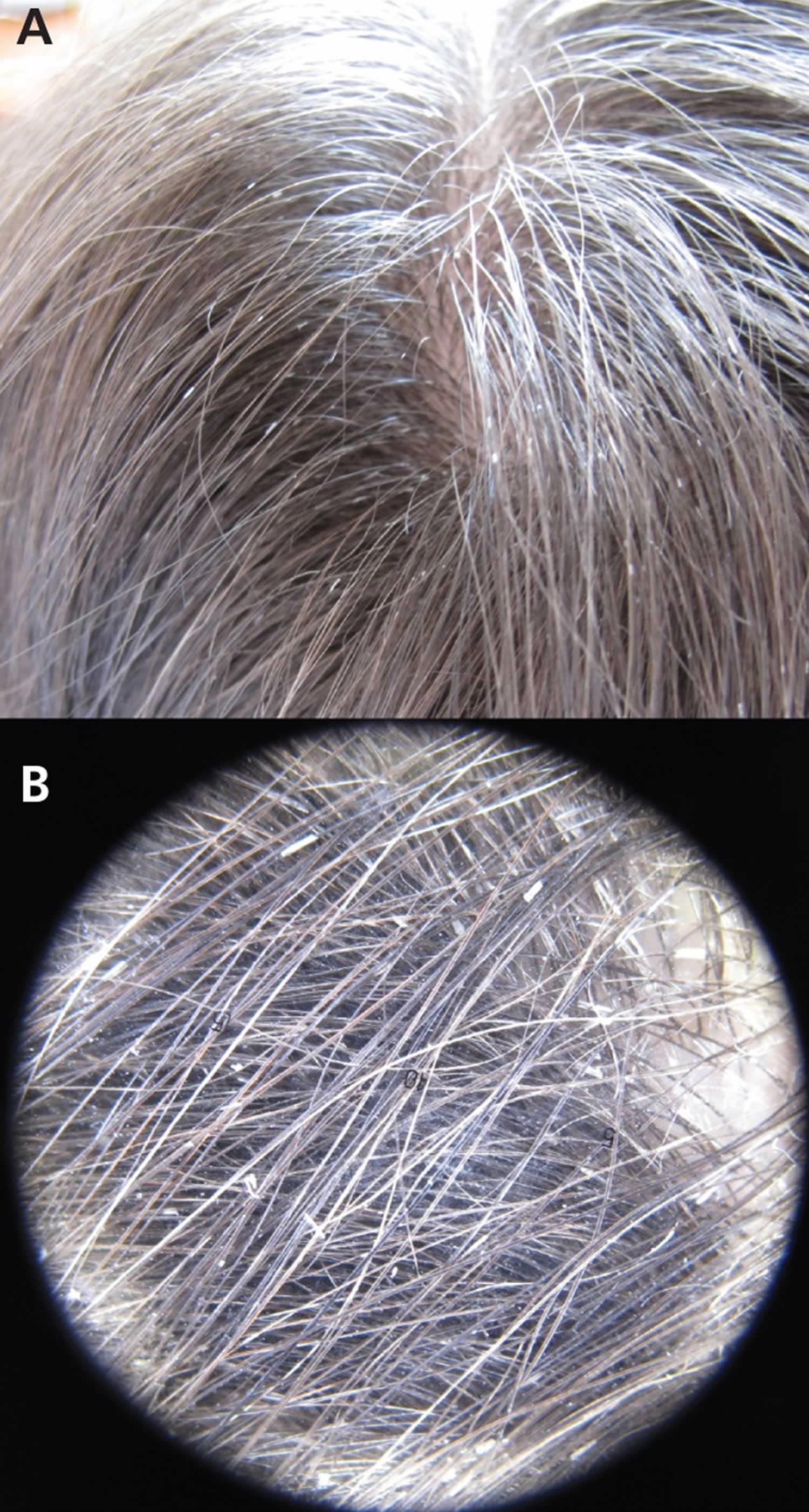 Pseudonits also called hair casts, peripilar keratin casts or peripillous sheaths, are small movable white-to-yellow tubular or or nodular structures that encircle the proximal hair shafts of the scalp 1). Pseudonits consist of hyperkeratotic or parakeratotic cells from both the internal and the external epithelial sheaths of the hair root, that surround the hair shafts 2). Varying in length (2–7 mm), pseudonits slide easily along the shaft without breaking it 3). The fact that hair casts easily slide along the shafts helps in differentiating them from other disorders of the scalp such as pediculosis capitis, piedra, trichomycosis, trichonodosis, and trichorrhexis nodosa 4). Hair cast pseudonits often get misdiagnosed as pediculosis capitis; however, the latter is symptomatic 5). Pseudonits hair casts usually involve only scalp hair. However, hair casts are known to involve beard, chest, axillary, and pubic hair 6).

Kligman, in the year 1957 for the first time, used the term hair casts in his article “parakeratotic comedones of scalp” 7). Hair casts pseudonits are classified as primary (idiopathic or nonparakeratotic peripilar) casts when there is no associated scalp condition, and as secondary (parakeratotic casts) when associated with scaling scalp conditions such as seborrheic dermatitis, psoriasis and pityriasis amiantacea 8). Other causes for secondary hair casts include infective scalp conditions such as pediculosis capitis, trichorrhexis nodosa, white piedra, and trichomycosis 9). The idiopathic peripillar keratin cast is uncommon. It affects young children and females and not found in association with any disease or scalp condition 10).

Hair casts are commonly seen in females who tightly plate their hair for prolonged periods 11). Hence, they are seen in females who style their hair in braids, twists, dreadlocks, braids, and weave with extensions and in those who use overnight rollers 12). The above-mentioned hairstyles cause excessive traction, leading to local scalp ischemia and inflammation, which is known to promote the development of hair casts 13). Hair casts induced by traction encircle single hair shaft and the parakeratosis is not prominent 14).

Although the condition is benign, if the diagnosis is not established properly, it can cause unnecessary anxiety in both the patient and the treating physician 15).

Pseudonits differential diagnosis includes dandruff, white piedra, trichorrehexis nodosa, monilethrix, trichomycosis and trichonodosis. Pseudonits can be differentiated from nits by an absence of itch (pruritis) and by their mobility along the hair shaft — nits do not slide. Differentiating pseudonits from nits is essential to make the correct diagnosis in order to prevent unnecessary treatment, anxiety, and/or embarrassment. If available, trichoscopic examination will show the tubular shape of pseudonits, which helps differentiate them from head lice (nits), which are oval (Figure 2) 16). In addition to physical removal, keratolytic lotions or shampoos are helpful. França and colleagues 17) have described resolution with a solution of 0.025% retinoic acid, and Ruiz-Villaverde et al 18) have seen good results with a 3% salicylate lotion; both of these agents are keratolytics. 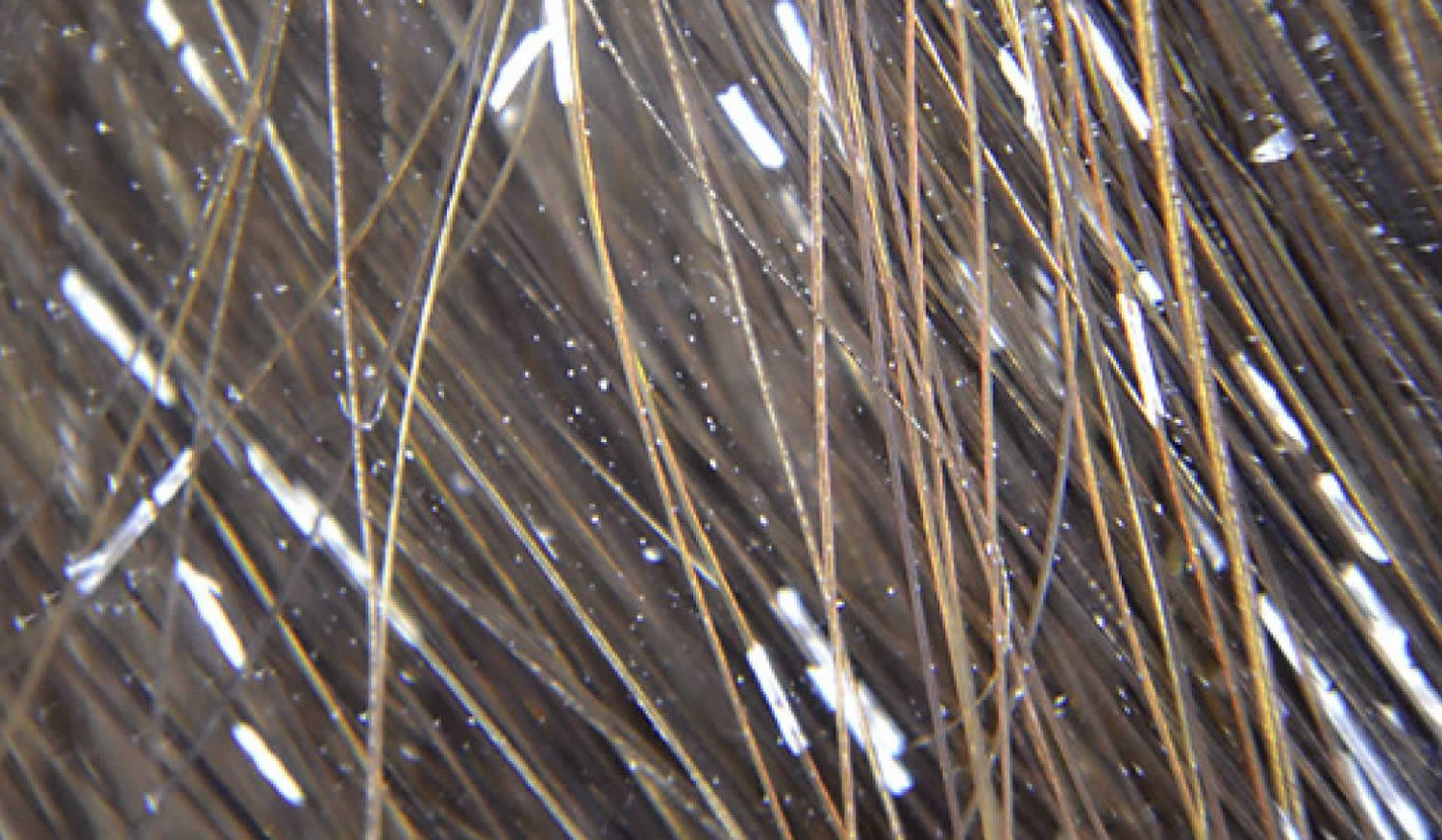 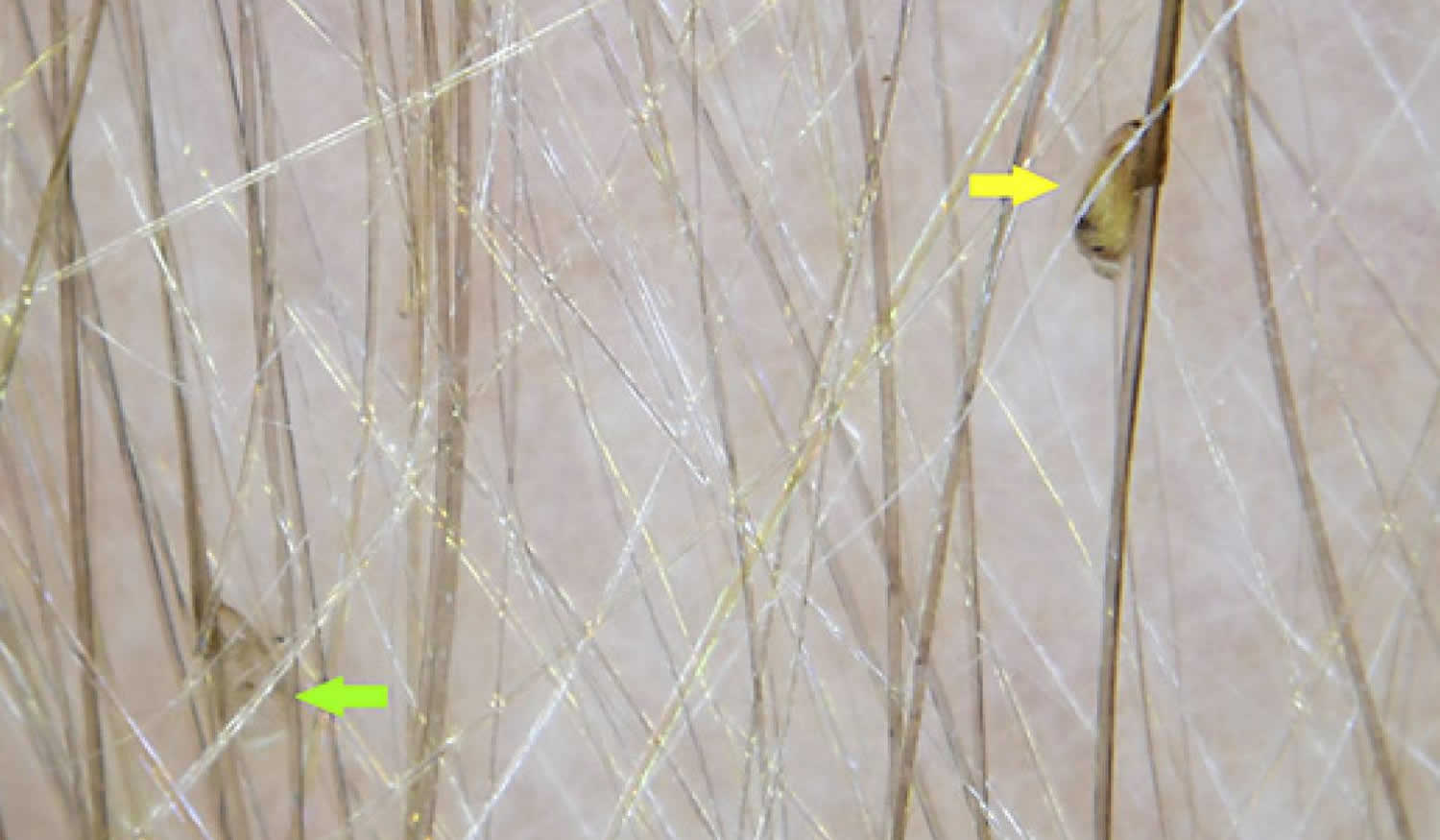 The normal outward growth of the hair carries the root sheaths of hair along with it 21). For reasons yet to be determined, there is a failure in the desquamation of some of the root sheaths and they remain encircled to hair shaft after their exit from the hair follicle, which eventually break off and form hair casts 22).

Multiple etiological factors are implicated in their causation. Pseudonits can be caused by several inflammatory scaling conditions such as psoriasis, seborrheic dermatitis, pityriasis amiantacea, dandruff, folliculitis decalvans, pemphigus vulgaris 23), or infective scalp conditions such as pediculosis capitis, trichorrhexis nodosa, white piedra, and trichomycosis 24). Sometimes, hair shaft structural abnormalities such as trichorrhexis nodosa and monilethrix may also cause hair cast pseudonits 25). Residues of cosmetic hair sprays or deodorants and dry shampoos can cause pseudocasts that look very similar to nits 26). Pseudonits hair casts are also seen in traction alopecia as a result of extraction of the root sheaths from excessive tension 27). Apparently, hair cast pseudonits are more frequently seen in females, who tightly plate their hair for prolong period. This excessive traction by causing local scalp ischemia and inflammation promotes the development of pseudonits 28).

In cases of pemphigus vulgaris of scalp, acantholysis occurring in the outer root sheath epithelium can lead to the formation of pseudonits 29).

Pseudonits may be observed in various dermatological conditions such as psoriasis, seborrheic dermatitis, folliculitis decalvans, and pemphigus vulgaris 34). Pseudonits appearance may vary according to the pathogenesis. Pseudonits can present as whitish scales, frequently seen in seborrheic dermatitis or psoriasis of the scalp, appearing at trichoscopy as easily detachable white, bizarrely shaped, amorphous structures on the hair shaft; although generally easily recognized at clinical examination, in children they can be misdiagnosed as nits 35). The most important characteristic of hair cast pseudonits is its easy sliding along the hair shaft, which helps in differentiating them from other similar conditions.

The diagnosis of pseudonits is generally clinical, but sometimes their presence may cause concern to both patients and physicians. Trichoscopy is a noninvasive and quick-to-perform tool that provides valuable information in a wide range of pediatric and adult hair and scalp conditions 36). It has been reported to be useful for the diagnosis of head and pubic lice, being able to unequivocally identify the presence of parasites and nits, as well as to distinguish full nits from empty nits (Figure 2) 37):279.)).

The best result is obtained with a solution of 0.025% retinoic acid lotion combined with manual removal of the cylinders with comb, but the condition can recur after stopping medication 38). Ruiz-Villaverde et al 39) have seen good results with a 3% salicylate lotion. Treatment with keratolitic or coaltar shampoos is ineffective. Hair casts tend to recur after discontinuation of the medication 40).