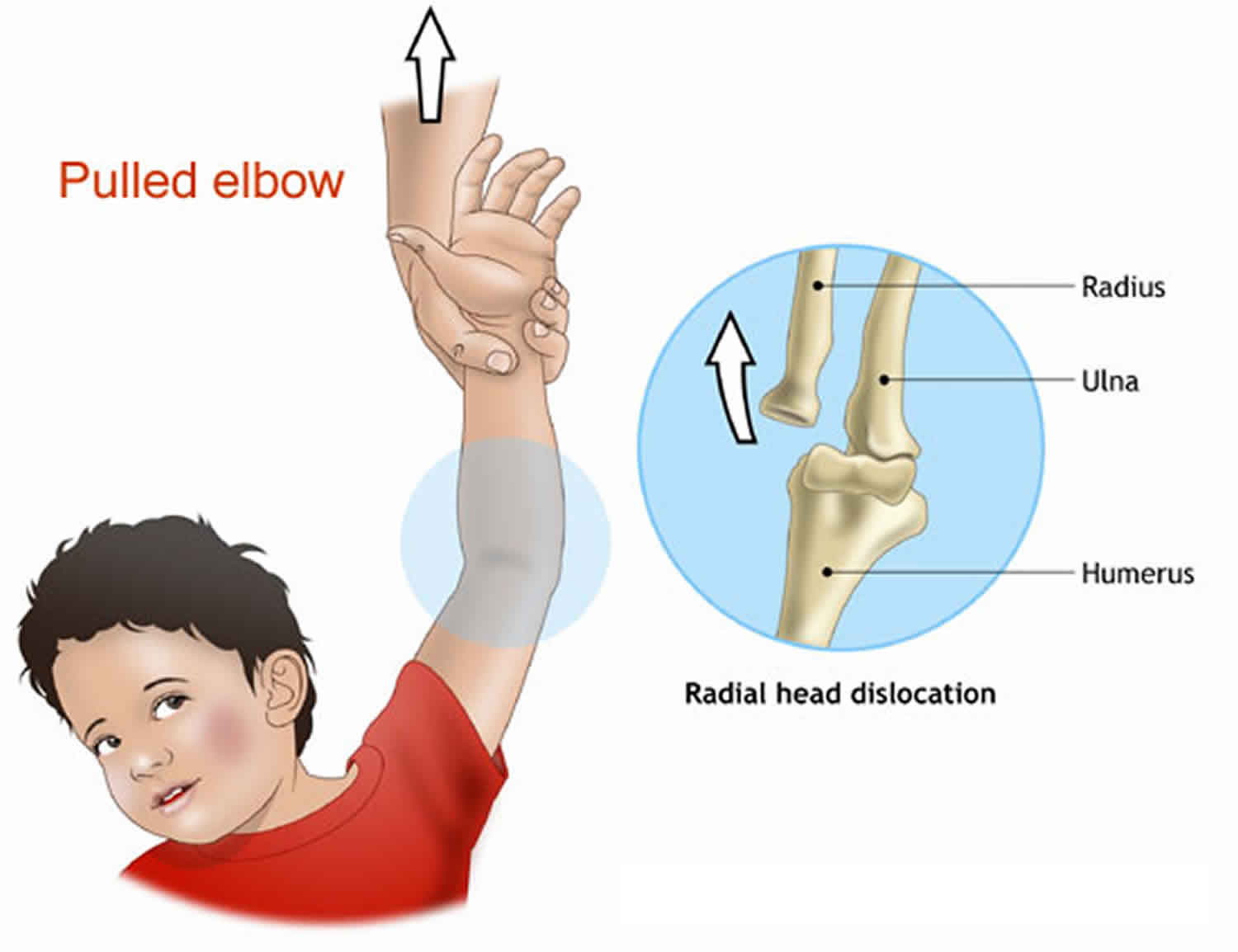 A pulled elbow also called nursemaid’s elbow, is a common injury among children under the age of five. A pulled elbow is a result of the lower arm (radius bone) becoming partially dislocated (slipping out) of its normal position at the elbow joint 1). The medical term for the injury is “radial head subluxation.” Pulled elbow is caused by a sudden pull on a child’s lower arm or wrist, for example when a child is lifted up by one arm. It can also happen when a child falls.

A strong, stretchy band called annular ligament normally holds the radius bone in place, but after a fall or a sudden pull, the ligament can be overstretched and the bone partially slips out from underneath the ligament. Because a young child’s bones and muscles are still developing, it typically takes very little force to pull the bones of the elbow partially out of place, making this injury very common. A pulled elbow occurs most often in children 1 to 4 years of age and represents more than 20% of upper extremity injuries in children, but can happen any time from birth up to age 6 or 7 years old. A pulled elbow occurs less commonly in children older than the age of 5 because the annular ligament strengthens with age. There is a slight female predominance, and the left arm is more commonly affected than the right. Recurrence rate is approximately 20% 2).

Although the injury may cause initial pain, a doctor or other healthcare professional can easily reset the elbow, quickly relieving any discomfort and restoring arm movement 3). It will not cause any long-term damage to your child. 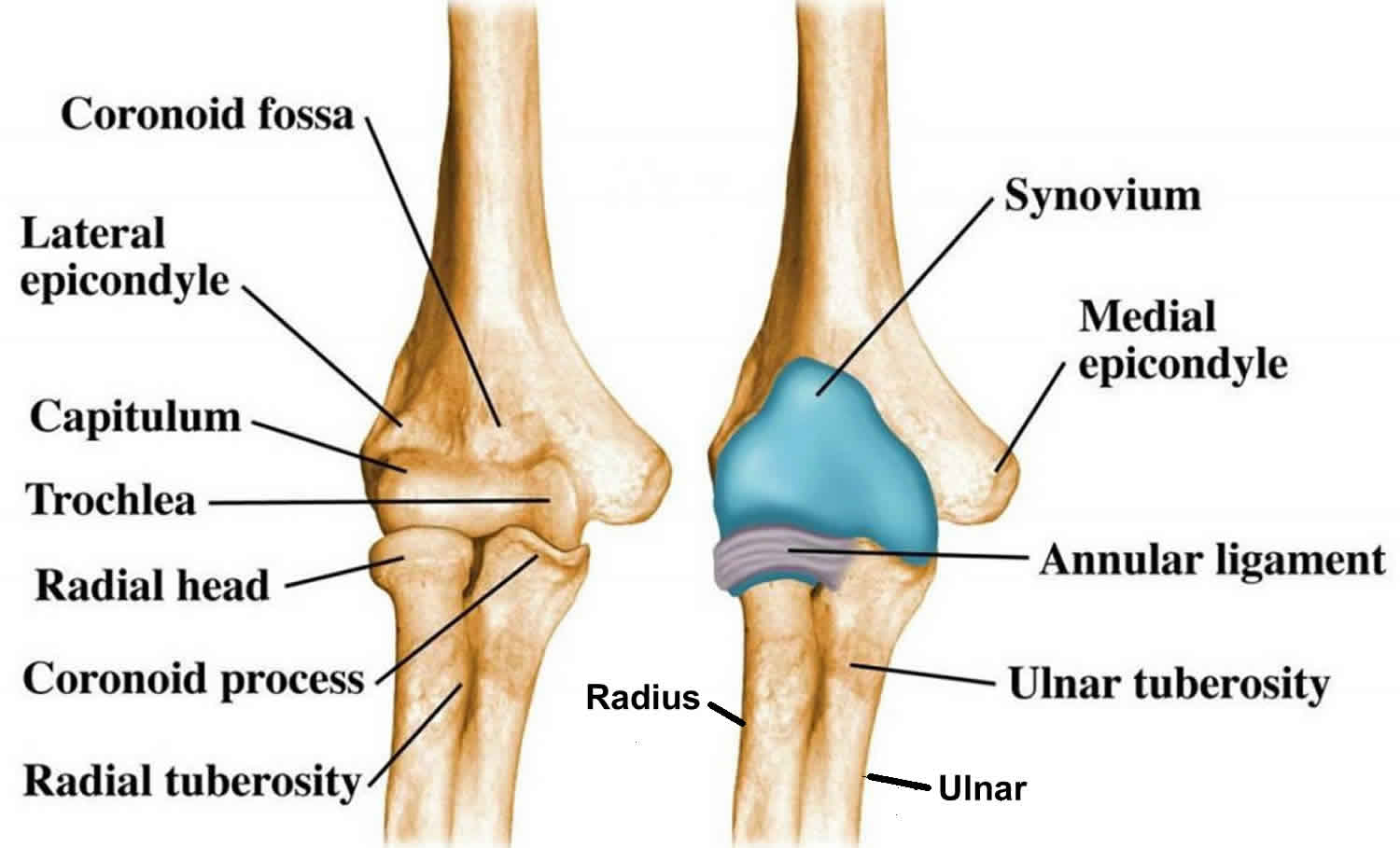 Footnote: (Left) The bones of the elbow and forearm shown with the palm facing forward. (Right) The ligaments of the elbow. In young children, the annular ligament may be weak, making it easier for the radius to slip out of place.

If you think your child has a pulled elbow, you should seek immediate medical treatment from a family doctor or at a hospital emergency department. The longer the elbow has been out of place, the more painful and difficult it is to put back into place, and the longer it takes to fully recover.

Pulled elbow or nursemaid’s elbow is a common condition in young children, especially under age 5. The injury occurs when a child is pulled up too hard by their hand or wrist. It is often seen after someone lifts a child up by one arm. This might occur, for example when trying to lift the child over a curb or high step.

Other ways pulled elbow may happen include:

Once the elbow dislocates, it is likely to do so again, especially in the 3 or 4 weeks after the injury.

Pulled elbow or nursemaid’s elbow does not usually occur after age 5. By this time, a child’s joints and the structures around it are stronger. Also, the child is less likely to be in a situation where this injury might occur. In some cases, the injury can happen in older children or adults, usually with a fracture of the forearm.

Some children are more likely than others to get a pulled elbow. It can happen more than once, and it may occur several times in children who have particularly loose joints.

To prevent a pulled elbow, make sure you don’t pick your child up by the lower arms or wrists – lift them up using their armpits instead. Teach others who care for your child, such as grandparents and child care workers, the correct way to pick up your child.

DO NOT swing children by their hands or forearms. To swing a young child in circles, provide support under their arms and hold their upper body next to yours.

It is unusual for children over five years old to get a pulled elbow, as their joints are a lot stronger.

In most cases, children with a pulled elbow will cry immediately after the sudden pull, and not use the injured arm at all. Their arm may simply hang by their side.

In some cases, children may have problems that limit movement of the arm.

The diagnosis of pulled elbow or radial head subluxation can typically be made clinically. Imaging should be performed if there is suspicion for fracture, elbow dislocation, or if edema or deformity are present on exam. Imaging is also indicated if the mechanism did not involve the typical axial traction of the arm or nonaccidental trauma is a concern. Radiographs are typically normal in radial head subluxation, but the displacement of the radiocapitellar line may be seen on plain film x-rays 4).

The partial dislocation will be reduced (manipulated back into place) by a doctor in a few seconds. This procedure is painful and distressing, but it only lasts a short moment and is over when the radial bone pops back into place. An X-ray is not necessary to diagnose a pulled elbow.

To perform the supination/flexion method, slight pressure should be applied to the radial head with the physician’s thumb while supporting the elbow with the same hand. The other hand should grasp the patient’s distal forearm. The patient’s forearm should then be supinated and fully flexed with gentle traction applied. A click may be felt or heard if the maneuver is successful.

A successful reduction should result in immediate cessation of pain. Most children will begin to use their arm within 5-10 minutes, and within 30 minutes 90% of children will be asymptomatic. It may take a few minutes for the children to realize that it is no longer painful to move the arm. If the patient does not regain function of the arm, imaging studies to assess for fracture or orthopedic consult may be warranted. If the patient refuses to use the arm after several minutes and imaging are normal, the arm should be placed in a sling, and the patient should be referred to an orthopedic surgeon.

If reduction was successful, no splinting or sling is necessary, and the prognosis is excellent. Because of possible recurrence, parents should be instructed to avoid activities that cause axial traction to the arm such as lifting, jerking or swinging the child by the hands, wrists or forearms.

Your child will be observed for a short while to check that they are using their arm without any problems or pain. They may be able to use their arm normally almost immediately after the elbow is reduced, or it might take a bit longer.

If a pulled elbow is not able to be put back into place, or your child is still not using the injured arm, an X-ray may be ordered to check for other possible injuries such as a fracture. You will be advised if this is necessary.

Once a pulled elbow has been treated, your child should be able to return to normal activities. However, if the elbow was partially dislocated for quite a while, then your child may need some pain medicine for a day or two. Follow the advice of the nurse or doctor, or see our fact sheet Pain relief for children.

If your child is not moving their arm fully by the next day, take them back to the doctor so that their arm can be evaluated again.

A pulled elbow will not cause any long-term damage to your child if treated promptly and appropriately.

If pulled elbow or nursemaid’s elbow is not treated, the child may be permanently unable to fully move the elbow. With treatment, there is usually no permanent damage.