What is reishi mushroom

Reishi (Ganoderma lucidum) also known as Reishi in Japan, Lingzhi in China, Ling chih and Ling chi mushroom in other countries, is a type of mushroom of the Polyporaceae family that grows on the stumps of oak and plum trees over a period of approximately 9 months in Asia 1). Reishi mushroom is not edible 2). Reishi is popular among consumers in Japan, China and Korea where it is widely used by Asian physicians and herbalists. This medicinal mushroom has been used in Asia for thousands of years to increase energy, stimulate the immune system, and promote health and longevity 3). In the US, Reishi is included in the American Herbal Pharmacopoeia and is most often recommended for its immune-supporting effects 4). In Poland and other countries outside Asia, Reishi mushroom is used as a daily food supplement that adapts itself to correct imbalances in the body 5). Influenced by an increasing number of studies into Reishi mushroom, modern uses of Reishi mushroom include treatment for coronary heart disease, arteriosclerosis, hepatitis, arthritis, nephritis, bronchitis, hypertension, cancer and gastric ulcers 6).

Several classes of bioactive substances, such as triterpenoids, polysaccharides, nucleosides, sterols, and alkaloids, have been isolated from Reishi mushroom 7). Both in vitro (test tube) and in vivo (animal) studies with Reishi mushroom have demonstrated that Reishi mushroom polysaccharides have anti-tumor activity through their immunomodulatory, anti-angiogenic, and cytotoxic effects. However, there are many questions that need to be answered before it is accepted and used as an anti-tumor agent 8), 9), 10). 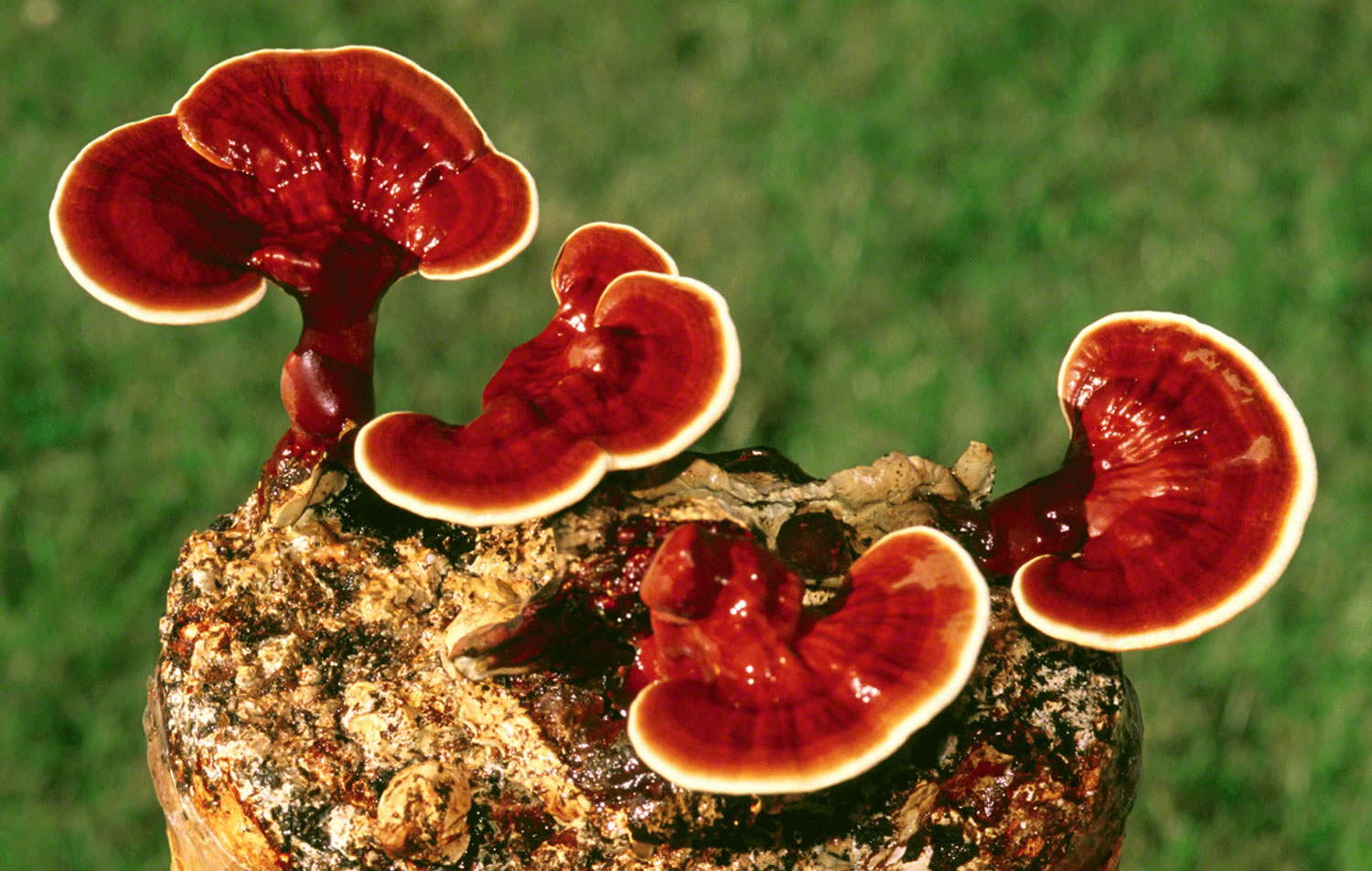 A systematic laboratory research elucidates that the anticancer and immunomodulatory properties of Reishi mushroom are largely contained in its diverse chemical constituents, whereas polysaccharides and triterpenes are two groups of prominent bioactive components 11).

The polysaccharides from Reishi mushroom are believed to trigger an indirect antitumour mechanism in which the host immune system is altered to target the tumor cells. The active polysaccharides are largely in the form of beta-glucans. It has been shown that beta-glucans have the ability to induce both innate and adaptive immune responses. The targeted immune cells include macrophages, neutrophils, monocytes, natural killer (NK) cells and dendritic cells. The branched chains of beta-glucans act on complement receptor type 3 (CR-3) triggering a series of molecular pathways such as NF-κB, mitogen-activated protein kinase (MAPK) and protein kinase C (PKC), which in turn, activate the host immune response for immune cell proliferations 12). Beta-glucans also act on dectin-1 receptor and toll-like receptor 2 (TLR-2) 13). The resultant actions are enhanced maturation of dendritic cells as well as increased opsonic and non-opsonic phagocytosis. Subsequently, cytokine production and splenic NK-cell cytotoxicity are increased 14). All of these immune reinforcements are believed to have a contribution to the antitumour properties of Reishi mushroom 15). In addition, Reishi mushroom is the only known source of a particular group of triterpenes, also known as ganoderic acids, which have been found to have direct cancer cell cytotoxicity on a wide variety of cancer cell lines, such as murine Lewis lung carcinoma (LLC) and Meth-A, and many of them have been suggested to counter angiogenesis and metastasis 16).

Prompted by the promising anticancer potential established by laboratory studies, a few randomized controlled trials have been conducted to evaluate the clinical effectiveness of Reishi mushroom. However, the majority of clinical trials are conducted in Asia and published in Asian databases. Full-text publications are usually not available in English.

In 2016 a well conducted Cochrane Review 17) identified and subsequently included five relevant randomized controlled trials. A total of 373 subjects were analyzed. A meta-analysis was performed to pool available data from individual trials. The review results found that patients with Reishi mushroom extract in their anticancer regimen were 1.27 times more likely to respond to chemotherapy or radiotherapy than those without 18). However, the data failed to demonstrate significant effect on tumor shrinkage when it was used alone. In addition, reishi mushroom could stimulate host immune functions by considerably increasing CD3, CD4 and CD8 lymphocyte percentages. Nevertheless, natural killer (NK)-cell activity, which has been suggested to be an indicator of self-defence against tumor cell, was marginally elevated. Patients in the Reishi mushroom group were found to have a relatively better quality of life after treatment than those in the control group 19). A few cases of minor side effect associated with Reishi mushroom treatment including nausea and insomnia were reported. The review authors concluded that the review did not find sufficient evidence to justify the use of Reishi mushroom as a first-line treatment for cancer 20). It remains uncertain whether Reishi mushroom helps prolong long-term cancer survival. However, Reishi mushroom could be administered as an alternative adjunct to conventional treatment in consideration of its potential of enhancing tumor response and stimulating host immunity. Reishi mushroom was generally well tolerated by most participants with only a scattered number of minor adverse events. No major toxicity was observed across the studies. Although there were few reports of harmful effect of Reishi mushroom, the use of its extract should be judicious, especially after thorough consideration of cost-benefit and patient preference. Future studies should put emphasis on the improvement in methodological quality and further clinical research on the effect of Reishi mushroom on cancer long-term survival are needed. No significant haematological or hepatological toxicity was reported.

In a study on the effect of Reishi mushroom in preventing obesity and weight gain in mice fed high-fat diet for eight weeks 21). This study of Reishi mushroom in mice eating a high-fat diet found that it may help to reduce weight and fat gain, reduce inflammation and improve the levels of “good” gut bacteria in the gut 22). It also appeared to reduce the risk of insulin resistance. Reishi mushroom was not seen to have a significant effect for mice fed a normal diet. The results of this study suggest a possible use for the Reishi mushroom extract, but randomized controlled trials in humans are required to determine safety and effectiveness for preventing weight gain. The same is true for any other conditions that Reishi mushroom is currently believed to improve. Either way, it is clear that eating a high-fat diet was the cause of the increased weight gain and body fat in these mice. Even if the Reishi mushroom extract is found to help prevent weight gain in humans, it is likely to be healthier to avoid a diet very high in fat. Eating a balanced diet including plenty of fruit and vegetables and taking regular exercise based on your ability is the best way to combat obesity. Reishi mushroom supplements are available to buy online but we wouldn’t recommend doing so. Just because something is “natural” doesn’t mean it is safe. The supplements can cause thinning of the blood, which could be very dangerous for people with high blood pressure. They are also known to interact in adverse ways with certain medications.

In another well conducted 2015 Cochrane Review 23) to evaluate the effectiveness of Reishi mushroom for the treatment of pharmacologically modifiable risk factors of cardiovascular disease in adults. There is no agreed dosage for Reishi mushroom treatment, however, most recommended amounts vary between 1.5 g and 9 g of dried Reishi mushroom extract per day 24). There are some claims that spores contain higher quantities of the active constituents. This has not been determined by research, and any medicinal benefit is unclear. Results from two studies showed that Reishi mushroom was not associated with statistically or clinically significant reduction in HbA1c (130 participants), total cholesterol (107 participants ), low-density lipoprotein cholesterol (107 participants), or body-mass index (107 participants). All other analyses were from a single study of 84 participants. The review authors found no improvement for fasting plasma glucose. Measures of post-prandial blood glucose level found inconsistent results, being in favor of placebo for ‘2-hour post-prandial blood glucose’ and in favor of Reishi mushroom for ‘plasma glucose under the curve at 4th hour’. There were no statistically significant differences between groups for blood pressure or triglycerides. Participants who took Reishi mushroom for four months were 1.67 times more likely to experience an adverse event than those who took placebo but these were not serious side effects. In conclusion, evidence from a small number of randomized controlled trials does not support the use of Reishi mushroom for treatment of cardiovascular risk factors in people with type 2 diabetes mellitus. Future research into the efficacy of Reishi mushroom should be placebo-controlled and adhere to clinical trial reporting standards 25).