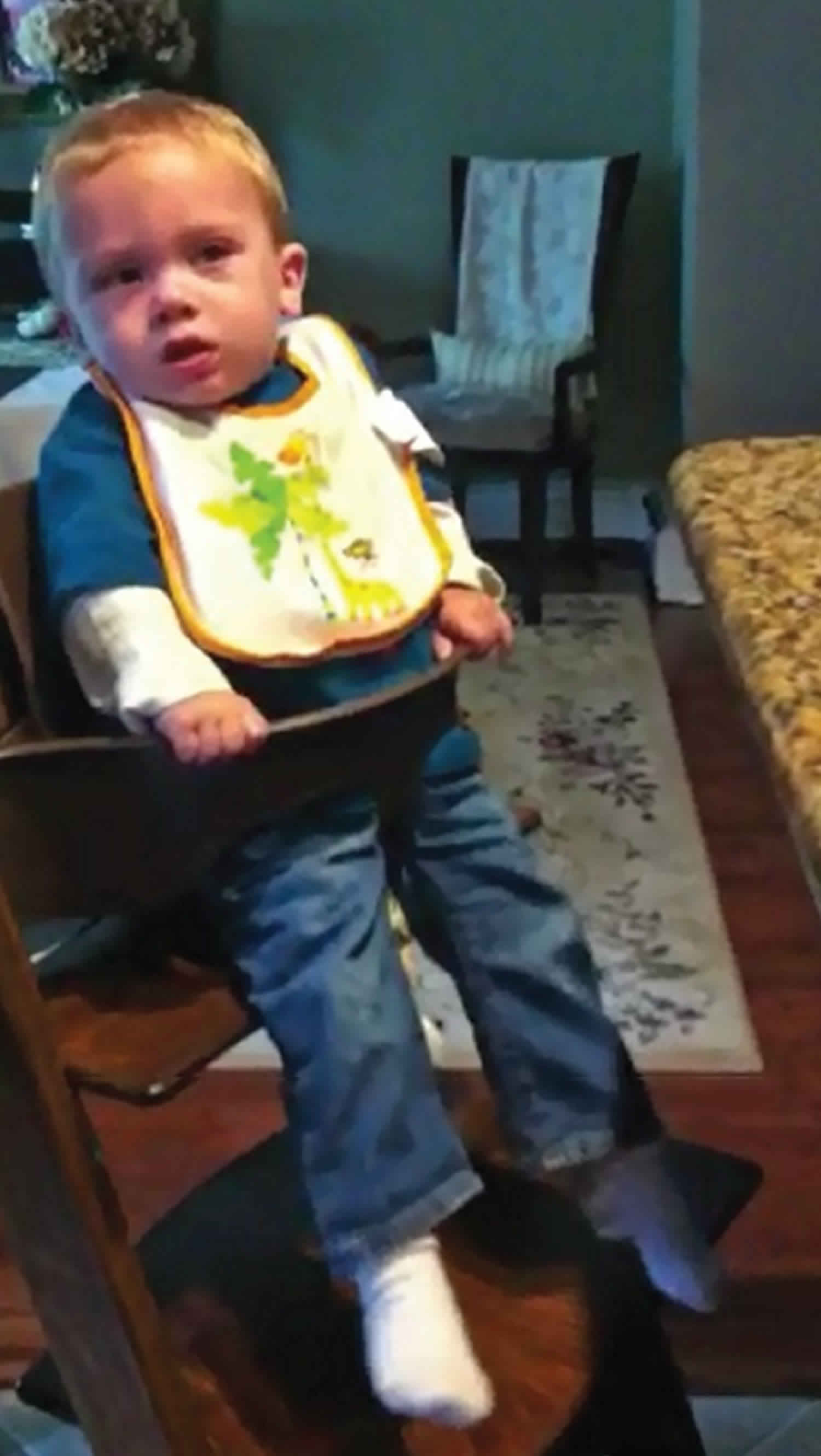 Sandifer syndrome is a paroxysmal dystonic movement disorder occurring in association with gastro-esophageal reflux disease (GERD) and, in some cases, hiatal hernia 1). Sandifer syndrome onset usually occurs during infancy or early childhood. The dystonic movements are characterized by abnormal posturing of the head and neck (torticollis) and severe arching of the spine. Episodes usually last for between 1-3 minutes and can occur up to 10 times a day, although they are usually associated with the ingestion of food. Vomiting, poor feeding, anemia, epigastric discomfort, hematemesis and abnormal eye movements have also been reported. Reflux esophagitis is common.

Fewer than 1% of children with gastro-esophageal reflux disease (GERD) also have Sandifer syndrome 2). Researchers theorize that many patients with Sandifer syndrome may not be recognized because it is mistaken for a neuromuscular or neuropsychiatric disease 3). Many of these children get extensive unnecessary neurologic evaluations and treatments 4). Sandifer syndrome is thought to be an underreported condition in literature but is believed to be seen frequently in the pediatric neurology and gastroenterology settings 5). Sandifer syndrome is underrecognized, and delays in diagnosis are due to atypical presentations or cases in which the diagnosis is not part of the differential 6).

First reported in the early 1960s, Sandifer syndrome is named after the neurologist Paul Sandifer, whose case series consisted of five children with neck contortions that were more pronounced after eating 7). The movements were not consistent with any known neurologic condition at the time. The children had unremarkable neurologic examinations with normal findings. Paul Sandifer’s investigations found that the children and adolescents had disorders of the upper gastrointestinal (GI) tract, particularly hiatal hernia. He theorized that their discomfort was relieved by the contortions because the older children said the movements alleviated the symptoms. Furthermore, when the hiatal hernia and acid reflux were surgically corrected, the posturing stopped 8).

Early diagnosis of Sandifer syndrome is essential, as effective treatment of the gastro-esophageal reflux (by pharmacological therapy or surgical intervention) leads to resolution of the movement disorder.

The true pathophysiologic mechanisms of Sandifer syndrome remain unclear, but the dystonic movements are clearly associated with gastro-esophageal reflux 10). Dysfunction of the lower esophagus with resultant acidic reflux is thought to be the most common precipitating factor, with the episodes of posturing coinciding temporally with recent feedings. Several studies have indicated that the dystonic posturing is a pathological reflex triggered in response to abdominal pain caused by gastroesophageal reflux and esophagitis. Although conflicting results have been obtained, some authors have suggested that the dystonic posture provides relief from abdominal pain.

Sandifer syndrome is diagnosed on the basis of the association of gastro-esophageal reflux with the characteristic movement disorder. Neurological examination is usually normal.

History and clinical observation are fundamental in identifying Sandifer syndrome as part of the atypical presentation of GERD 11). Typically the infant may exhibit irritability, crying, eye deviation with head version, torticollis that may change sides, extensor spasm, dystonic posture and rumination (rechewing of regurgitated food product) 12).

Sandifer syndrome is most commonly mistaken for seizures 13). The infant or child typically appears to have an alteration in mental status associated with the tonic posturing.

Sandifer syndrome per se is not associated with specific complications. However misdiagnosis eg as a neurologic problem may result in a significant delay in the diagnosis of associated GERD and timely intervention.

Sandifer syndrome is a clinical diagnosis and most infants have a normal physical exam as noted above. As such empiric interventions and therapy are warranted in the absence of clinically concerning features, such as a baseline abnormal neurologic exam, clinical or historic features that suggest an underlying metabolic or genetic disorder, concerns about nutritional status, respiratory complications, known seizure disorder.

Laboratory studies generally are not helpful in diagnosis but several case studies have reported the presence of chronic anemia that may be the result of nutritional problems, hematemesis, esophagitis, and mild chronic blood loss due to longstanding GERD 24).

Guaiac testing of fecal sample may be useful; occult gastrointestinal bleeding may occur with GERD and esophagitis or with milk protein allergy, both of which may be causative.

If there are clinical concerns about nutritional or metabolic status, then screening tests such as basic chemistries, blood counts or urinalysis may be useful.

Endoscopy with performance of esophageal biopsy is the most sensitive way to diagnosis esophageal inflammation due to reflux and may be useful to rule out other conditions may cause esophageal inflammation that could mimic GERD; however that is outside of the scope of this discussion. Typically an invasive procedure requiring sedation such as endoscopy should be limited to patients with unusual presentations or those who are not responsive to more conservative tests and usual interventions and therapies.

Video-EEG monitoring can help differentiate seizures from posturing related to reflux and can be combined with a pH probe/ MII study to demonstrate the nature of the spells and any correlation with findings of reflux.

Treatment for Sandifer syndrome focuses on resolving the underlying condition of gastro-esophageal reflux disease (GERD). Case studies verified that the posturing does not return once the GERD or hiatal hernia is successfully treated 25). Most cases of Sandifer syndrome resolve with time and development, within the first 24 months. Initial interventions should be directed at “lifestyle” changes–modification or attention to feeding habits, adjustment of feeds (whether breast milk or formula), exclusionary diets, positioning.

Typical medications directed at GERD include acid suppressants (H2 receptor antagonists, proton pump inhibitors), buffers (antacids), prokinetic. These medications are used to treat GERD in older children and adults. There is very limited data about their usefulness in infants < 12 months. Those studies which have been done show mixed results with respect to the efficacy of these pharmacologic interventions versus their recognized adverse effects and cost 26).

Lifestyle changes are the first step in treating GERD and Sandifer syndrome. Nearly 80% of infants will have improvement of their symptoms within 2 weeks with lifestyle changes alone 27). Parents of healthy full-term infants should thicken expressed breast milk or formula with 1 tablespoon of plain infant rice cereal for every 2 to 4 oz of breast milk or formula, or use a commercially prepared prethickened formula 28). Thickened formula should be used with caution with preterm infants due to increased risk of necrotizing enterocolitis 29). Parents should decrease the volume or frequency of feedings in babies who are being overfed, and to avoid passive cigarette smoke 30). Placing the child completely upright after feedings seems to have benefit, as does placing the child in the flat prone position 31). Infants can be placed prone only for short periods and only while awake and supervised. They should not be allowed to sleep in the prone position due to known increased risk of sudden infant death syndrome (SIDS) 32). Elevated or supine positioning such as propping in an infant carrier provided no benefit 33).

A small retrospective case review of infants with persistent Sandifer syndrome despite aggressive medical therapy found that patients responded when switched to an amino-acid-based formula 34). This may indicate an allergy to cow’s milk protein which is associated with eosinophilic esophagitis and GERD. In this situation, nursing mothers should be advised to discontinue cow’s milk from their diet 35).

If patients need medication in addition to the previously mentioned treatments, the most commonly prescribed drugs are antisecretory agents, gastric acid buffers, and mucosal surface barriers. Prokinetic agents such as metoclopramide are not recommended because the benefits are outweighed by risks such as irritability, lethargy, extrapyramidal reactions, and permanent tardive dyskinesia 36). A study by Kabakuş and Kurt 37) showed that the addition of medication to the treatment regimen led to a dramatic decrease in posturing events. Agents such as histamine2-receptor antagonists and proton pump inhibitors reduce the amount of acid secretion in the stomach. Ranitidine, cimetidine, famotidine, and nizatidine have been commonly used but their biggest reported drawback is tachyphylaxis 38). Although histamine2-receptor antagonists are widely used, a systematic literature review of efficacy and safety showed little evidence to justify their use and recommended they be used with caution 39).

Proton pump inhibitors inhibit acid secretion by blocking the H+K+ATPase pump in the gastric parietal cell, keeping gastric pH above 4 for longer periods of time, and inhibiting meal-induced acid dump. They also improve gastric emptying and reduce reflux volume. Proton pump inhibitors do not seem to have the same tachyphylaxis profile as histamine 2-receptor antagonists 40). However, persistent use may lead to overgrowth of bacteria in the gastrointestinal tract and decreased absorption of calcium and vitamin B12.9 Omeprazole, lansoprazole, and esomeprazole are approved for children over age 1 year. Esomeprazole has been approved for the treatment of esophagitis and GERD in infants ages 1 month to 1 year. However, no studies in infants have demonstrated efficacy better than placebo.1 To date, the studies done on this age group are limited or poorly done 41).

Gastric acid buffers may have limited use as on-demand relief in children but should not be used on a regular or long-term basis. Most of these products contain aluminum and if used in high doses can cause toxic effects in children over time. At this time, no mucosal surface protective agents have been approved for use in children 42).

Surgery may be necessary when optimized medical therapy is not effective 43). In Kinsbourne’s pioneering 1962 report, the contortions were quickly and permanently resolved by operative correction of the hiatal hernia 44). Surgical correction with fundoplication shows near-complete relief of symptoms in 60% to 90% of children 45). Fundoplication surgery increases the length of the intra-abdominal portion of the esophagus, accentuates the angle of His, and corrects a hiatal hernia if present 46). This is a major procedure and is considered safe, but should be reserved for those who fail other therapies 47).

In 1991, Bruckheimer and colleagues 48) undertook a review of published cases of Sandifer syndrome, looking at the outcomes of treatment and reporting their own experiences treating patients with GERD and Sandifer syndrome. Their research revealed that 86% of patients without hiatal hernia responded to medication and lifestyle changes alone. The children without hiatal hernia who required surgery had a response rate of 100% to surgical correction. Eighty-seven percent of surgical patients who had a hiatal hernia responded to surgery and the symptoms of Sandifer syndrome resolved. The author noted that in two patients who did not have successful surgical control of the reflux, the posturing did not stop 49).