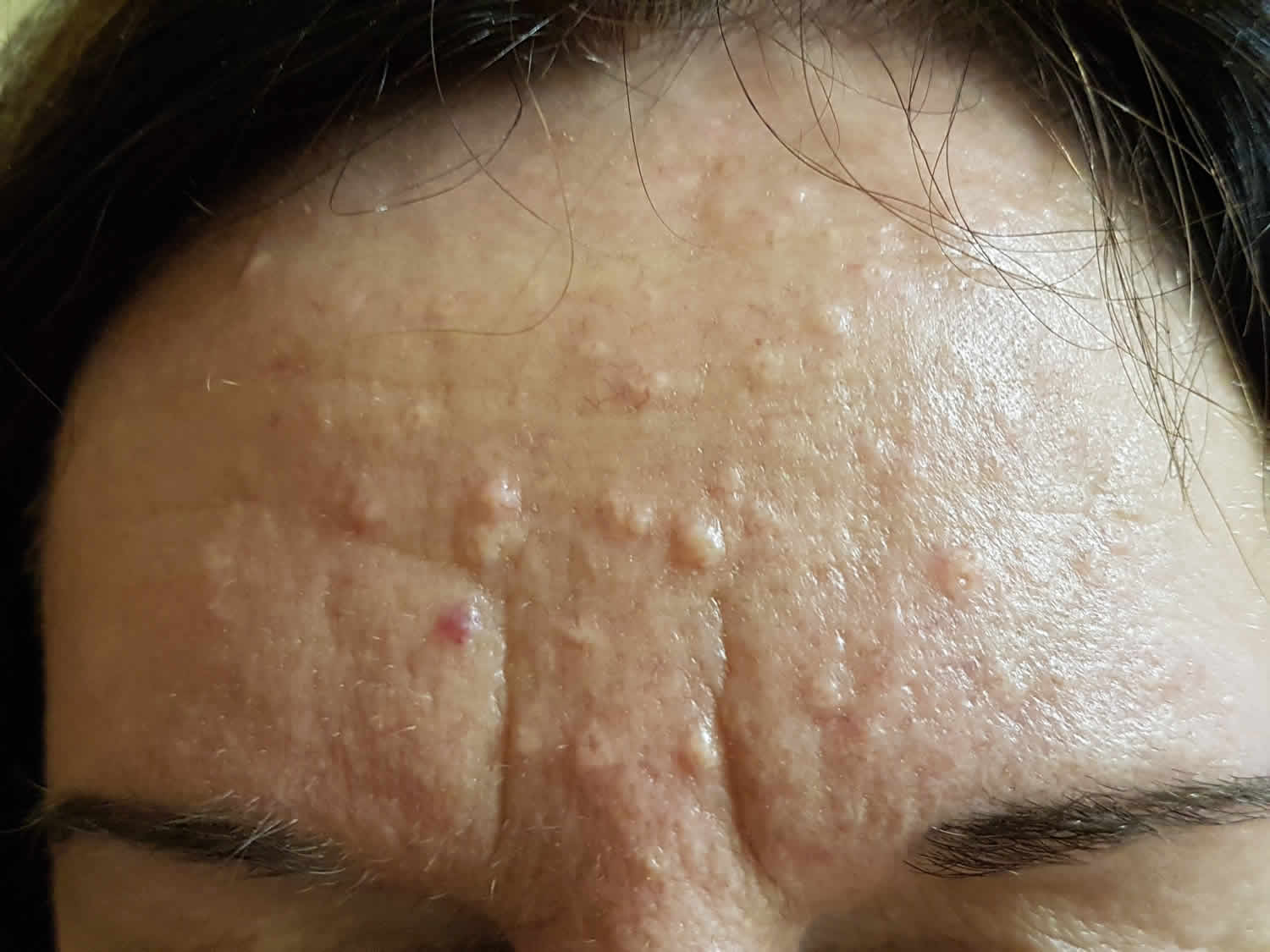 What is sebaceous hyperplasia

Sebaceous hyperplasia can be single or multiple and manifest as yellowish, soft, small papules on the face (particularly nose, cheeks, and forehead). Sebaceous hyperplasia occasionally also occurs on the chest, areola (nipple), mouth, scrotum, foreskin, shaft of penis, and vulva 4). Rarely reported variants have included a giant form 5), a linear 6) or zosteriform arrangement, a diffuse form, a nevoid form 7) and a familial form.

Sebaceous hyperplasia is harmless and does not require any treatment. However, for cosmetic reasons or if they are bothersome if irritated, individual lesions may be removed by light electrocautery or laser vaporisation.

When the lesions are severe, extensive or disfiguring, oral isotretinoin is effective in clearing lesions but these may recur when treatment is stopped. In females, antiandrogens may help improve the appearance.

Facial papular sebaceous hyperplasia is thought to be caused by a decrease in the circulating levels of androgen associated with aging 8). Ultraviolet radiation is considered only a cofactor, because sebaceous hyperplasia occasionally occurs on areas of the body where sunlight is not a relevant issue, including the buccal mucosa, areolae, and vulva.

A decrease in circulating androgen results in smaller sebocytes with larger nuclei and lower lipid content, which migrate slowly through the sebaceous gland. As migration and disintegration of the sebocytes slows, the gland becomes enlarged, with a widened sebaceous duct and an increased number of basal cells.

Although more commonly found in the older population, premature or familial cases have been reported in which younger individuals are affected with multiple lesions, suggesting a genetic predisposition. In these cases of premature familial sebaceous hyperplasia, extensive eruptions appear at puberty and tend to progress with age 11).

Sebaceous glands are found throughout the skin except on the palms and soles. They exist as a component of the pilosebaceous unit or, less frequently, open directly to the epithelial surface in areas of modified skin, including the lips and buccal mucosa (as Fordyce spots), glans penis or clitoris (as Tyson glands), areolae (as Montgomery glands), and eyelids (as meibomian glands). The largest and greatest numbers of sebaceous glands are found on the face, chest, back, and the upper outer arms.

These holocrine glands are composed of acini attached to a common excretory duct. The life cycle of a sebocyte, the cells that form the sebaceous gland, begins at the periphery of the gland in the highly mitotic basal cell layer. As sebocytes differentiate and mature, they accumulate increasing amounts of lipid and migrate toward the central excretory duct. The mature sebocytes complete their life cycle at the central duct and disintegrate, releasing their lipid contents as sebum. The turnover time from sebocyte production to disintegration is approximately 1 month.

Sebaceous glands are highly androgen sensitive, and, although the number of sebaceous glands remains approximately the same throughout life, their activity and size vary according to age and circulating hormone levels. Together, sebaceous and sweat glands account for the vast majority of androgen metabolism in the skin.

Sebocytes contain androgen-metabolizing enzymes, including 5-alpha-reductase type I, 3-beta-hydroxysteroid dehydrogenase, and 17-beta-hydroxysteroid dehydrogenase type II. These enzymes metabolize relatively weak circulating androgens, such as dehydroepiandrosterone-sulfate, into the more potent androgens, such as dihydrotestosterone. These, in turn, bind to receptors within the sebocytes, causing an increase in the size and metabolic rate of the sebaceous gland. Studies have shown that the activity of 5-alpha-reductase is higher in the scalp and facial skin than in other areas, so that testosterone and dihydrotestosterone stimulate more sebaceous gland proliferation in these areas. Estrogens, on the other hand, have been found to decrease sebaceous gland secretion.

In the perinatal period, the sebaceous glands are initially large and are likely responsible for the production of vernix caseosa often seen in newborns. The activity and size of the sebaceous glands regress shortly after birth, due to withdrawal of maternal hormones, and remain small throughout infancy and childhood. At puberty, sebaceous glands enlarge and become increasingly active due to increased production of androgens, reaching their maximum by the third decade of life. As androgen levels decrease with advancing age, the sebocyte turnover begins to slow down.

This decrease in cellular turnover results in crowding of primitive sebocytes within the gland, resulting in enlargement. In contrast to normal sebocytes that are engorged with lipid, the hyperplastic sebaceous glands contain small undifferentiated sebocytes with large nuclei and scant cytoplasmic lipid 12).

Sebaceous hyperplasia lesions may be single or multiple. They are seen in areas where many oil glands are found – the face (nose, cheeks, and forehead), chest, upper arms, mouth lining, vulvar area, and around the nipples.

They are small (2–9 mm), painless, whitish-yellow-to-pink or skin-colored bumps, often with a central depression or dimple.

Sebaceous hyperplasia is harmless and does not require any treatment. However, for cosmetic reasons or if they are bothersome if irritated, individual lesions may be removed by light electrocautery or laser vaporization.

Many types of treatment can remove sebaceous hyperplasia, with a small risk of leaving scars:

When the lesions are severe, extensive or disfiguring, oral isotretinoin is effective in clearing lesions but these may recur when treatment is stopped. In females, antiandrogens may help improve the appearance.