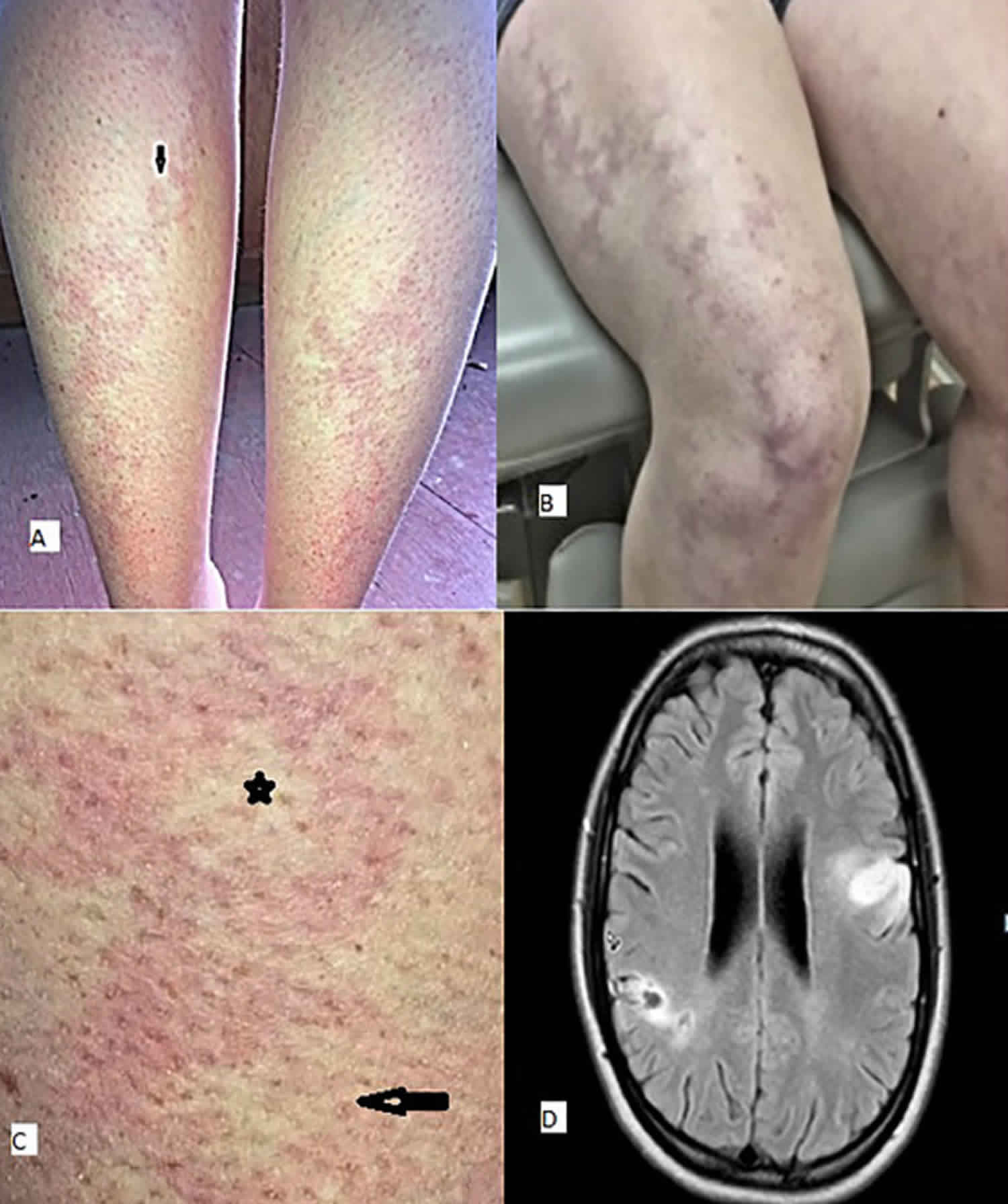 The cause of Sneddon syndrome is often unknown, but it is sometimes associated with an autoimmune disease. Most cases are sporadic but some familial cases with autosomal dominant inheritance have been reported.

Sneddon syndrome was first described a separate clinical entity in the medical literature by Dr. Sneddon and colleagues in 1965 3). Since that time, significant debate has existed as to whether Sneddon syndrome is a distinct disorder, part of a spectrum of disorders, or a subtype of antiphospholipid syndrome. Some researchers believe that Sneddon syndrome should be separated into primary and secondary cases depending on whether an underlying cause has been identified (primary versus idiopathic), while others suggest a classification based on whether certain symptoms of autoimmune disease are present or not (aPL-positive versus aPL negative) 4). Primary Sneddon syndrome would denote cases where there was no known cause (idiopathic); secondary Sneddon syndrome would denote cases that are believed to occur secondary to another disorder or thrombophilic state. Some researchers believe that Sneddon syndrome should be differentiated by whether antiphospholipid antibodies are present (aPL-positive) or absent (aPL-negative), others discuss autoimmune/inflammatory etiopathogenesis versus thrombophilia.

Sneddon syndrome has an estimated annual incidence of approximately one out of 250,000 individuals in the general population 5). Sneddon syndrome has been reported much more often in females than in males, especially young women under the age of 45  6). Almost 80% of the patients are women with a median age of diagnosis at 40 years. Symptoms usually begin in early to middle adulthood, but can occur at any age including childhood. It does occur occasionally in girls as young as 10 years old 7).

Sneddon syndrome treatment usually involves anticoagulation (blood-thinning) with warfarin, and/or the use of other medications 8). 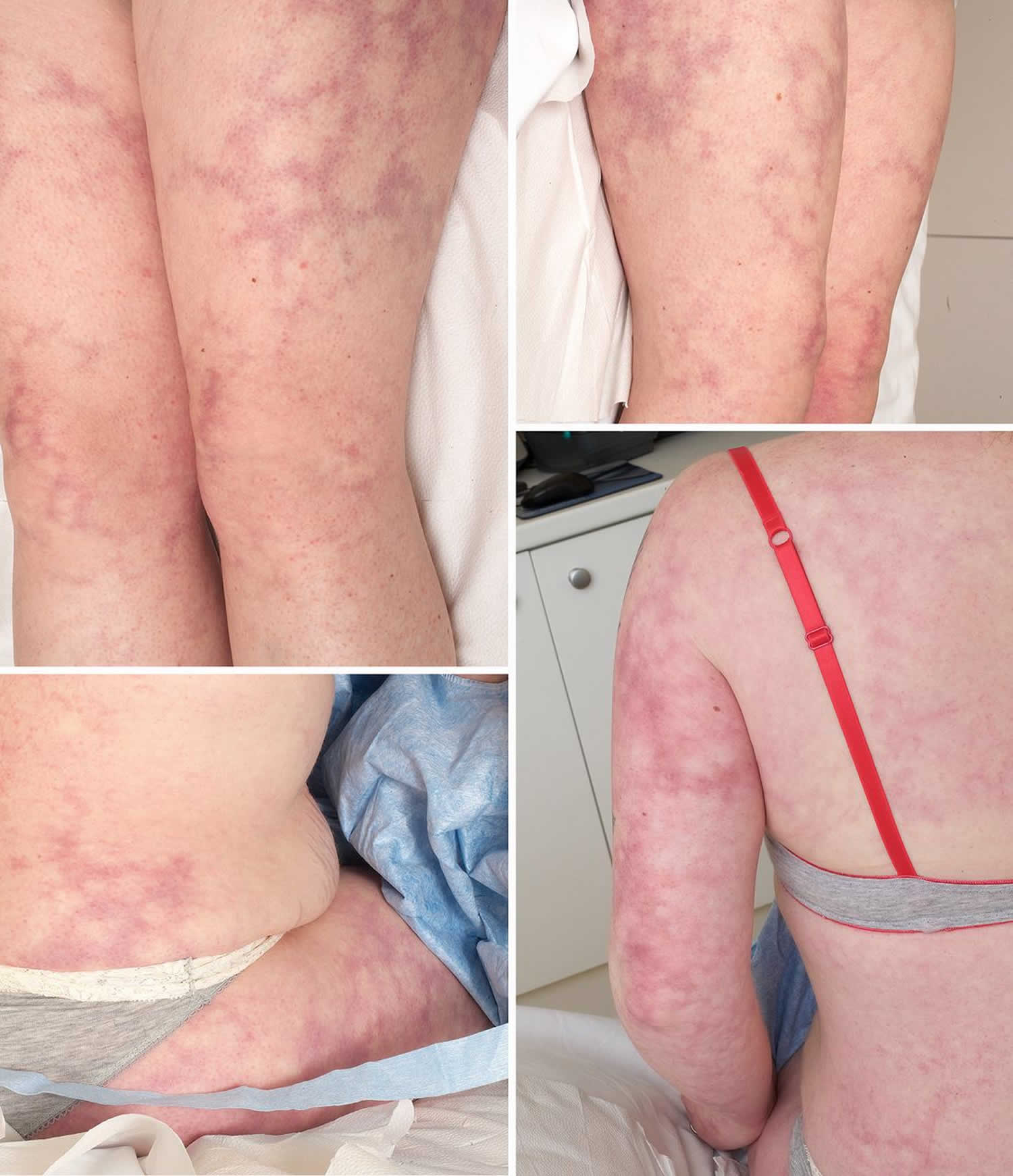 The underlying cause of Sneddon syndrome is not well-understood. About 50% of cases are idiopathic (of unknown cause). Possible immunological, environmental, genetic, and/or other factors are under investigation as potential causes of Sneddon syndrome. In some cases, it is associated with autoimmune diseases such as systemic lupus erythematosus (SLE), antiphospholipid syndrome, Behçet disease, or mixed connective tissue disease 12).

Genetic factors are thought to play a role in the development of Sneddon syndrome, as familial cases have been reported 13). In one family, a mutation in the CECR1 gene was identified as the cause of Sneddon syndrome 14). Mutations in this gene have been found to cause adenosine deaminase 2 deficiency, a condition that also causes livedo racemosa (and other symptoms) and has earlier onset than Sneddon syndrome.

The signs and symptoms of Sneddon syndrome are caused by excessive growth of the inner surface of blood vessels (endothelial proliferation), leading to occlusion of the arteries with impaired blood flow and clotting (thrombosis) 15). Clumps of cells may break loose and circulate in the blood stream. The clumps may lodge in an artery and block blood flow (embolism). Tissue loss or damage may occur in areas deprived of blood flow.

Antiphospholipid syndrome is an autoimmune disorder, a disorder that occurs when the body’s immune system mistakenly targets healthy tissue. Less often, Sneddon syndrome can be associated with other autoimmune disorders such as systemic lupus erythematosus (SLE), Behcet’s disease, or mixed connective tissue disease.

Sneddon syndrome is a slowly progressive disorder of small- and medium-sized arteries, which are the blood vessels that carry blood away from the heart. The disorder is characterized by blockages (occlusions) of the arteries that cause a reduction of blood flow to the brain and to the skin. Associated symptoms vary from one person to another based, in part, upon the specific arteries that are affected. An irregular, net-like pattern of bluish skin discoloration surrounding areas of normal-appearing skin (livedo reticularis) is characteristic of this disorder. The arms and legs are most often affected as well as the trunk, buttocks, and hands and feet. Livedo reticularis is worsened by cold and pregnancy. In the European medical literature, the term livedo reticularis is used to describe the skin changes of the extremities only that disappear when the skin is warmed. Livedo racemosa is used to describe skin changes that involve also the buttocks and the trunk and do not disappear with warm temperatures. These two dermatologic conditions are separated because livedo reticularis is much more frequent, but the association with strokes exists for livedo racemosa only.

Generally, livedo reticularis develops before the neurological symptoms by as much as 10 years, although sometimes the onset of skin symptoms may occur at approximately the same time. Only rarely, do the skin symptoms occur after the neurological symptoms. Painfully cold fingers and toes caused by dilation or constriction of small vessels in response to cold (Raynaud’s phenomenon) may also occur. Blues discoloration of the hands and feet due to the lack of blood flow (acrocyanosis) has also been reported.

Recurrent episodes of mini-strokes (transient ischemic attacks) or strokes (cerebrovascular accidents) are a common finding of Sneddon syndrome. Less frequently, microbleeds and intracerebral hemorrhages also occur in Sneddon syndrome. The associated neurological symptoms vary depending upon the location of arterial blockages or bleedings. These symptoms may include difficulty concentrating, memory loss, confusion, personality changes, impaired vision, and weakness of one side of the body (hemiparesis). Sneddon syndrome may cause progressive reduction of mental and cognitive function, potentially resulting in dementia. Aphasia, which is defined as a communication disorder that impairs the ability to process language including impairing the ability to speak or understand others, is also common. Less often, seizures, muscle pain and stiffness, and abnormal movements caused by repetitive, jerky muscle contractions (chorea) may also occur.

Heart murmurs, heart disease resulting from reduced blood flow to heart tissue (ischemic heart disease), or thickening of the valves between the chambers of the heart (valvular stenosis) have also been diagnosed in people with Sneddon syndrome and may be associated with rheumatic heart disease or endocarditis. In rare cases, impairment of the kidneys may occur.

Sneddon syndrome is characterized by livedo racemosa, which often precedes the onset of recurrent strokes by over 10 years 16).

Other dermatological manifestations associated with Sneddon syndrome include:

Cerebrovascular complications of Sneddon syndrome include 25):

Cardiovascular complications of Sneddon syndrome may include:

Ophthalmological complications of Sneddon syndrome may include:

Renal complications are rare, and include:

The diagnosis of Sneddon syndrome is usually suggested by the combination the pattern of skin discoloration called livedo reticularis (livedo racemosa) and neurological symptoms, particularly unexplained stroke in young individuals 26). Diagnosis of cerebrovascular damage is confirmed when imaging techniques such as magnetic resonance imaging (MRI) or computed tomography (CT) reveal lesions (infarcts) in the brain. History of transient ischaemic attacks or stroke or evidence of these on imaging can support the diagnosis 27).

Surgical removal and microscopic study of tissue samples (skin biopsy) may confirm the progressive arterial disease (arteriopathy) characteristic of Sneddon syndrome demonstrating occlusion of the vessel lumina with no vasculitis. On deep skin biopsy, histopathology demonstrates a non-inflammatory thrombotic vasculopathy involving small and medium-sized dermal arteries 29). Typically, there is are signs of vasculopathy at different stages. Sensitivity increases with the number of deep skin biopsies: 27% sensitivity with one, 53% with two, and 80% with three biopsies 30).

Lesions identified by MRI tend to be small, multifocal, and often located in the periventricular deep white matter or pons. In up to 75% of patients with Sneddon syndrome, cerebral angiography is abnormal 33).

The optimal management of Sneddon syndrome has not been established, and controlled trials have not yet been performed 34). Currently, the most widely accepted treatment is anticoagulation with warfarin. Some suggest that antiphospholipid antibodies negative (aPL-negative) patients should follow a less aggressive approach consisting of antiplatelet therapy with aspirin, while others recommend warfarin with a higher international normalized ratio target 35).

Angiotensin-converting enzyme (ACE) inhibitors have been suggested to reduce endothelial proliferation (growth of the inside lining of the vessels), and prostaglandin to improve blood flow and gas exchange in small vessels (microvascular perfusion) 36). Abstaining from smoking and abstaining from using estrogen oral contraceptives may prevent or decrease the severity of neurological symptoms 37).

While the use of immunosuppressive therapy appears generally ineffective, there are data indicating that rituximab may be effective in antiphospholipid antibodies positive (aPL-positive) patients 38).

Additional research exploring the underlying causes of Sneddon syndrome may identify treatment options based on the cause in each affected person 39).

While we are not aware of statistics regarding the life expectancy of people with Sneddon syndrome, studies have estimated the six year mortality rate to be 9.5% 40).

Sneddon syndrome is a chronic, progressive disease often resulting in cognitive decline and early-onset dementia, due to the cumulative effect of multiple cerebral infarcts 41). The exact neurological symptoms vary, depending upon the location of arterial blockages 42). However, the condition often causes progressive reduction of mental and cognitive function. Dementia ultimately occurs in many patients, resulting in early retirement 43). Aphasia, the loss of ability to express or understand speech, is also common 44).