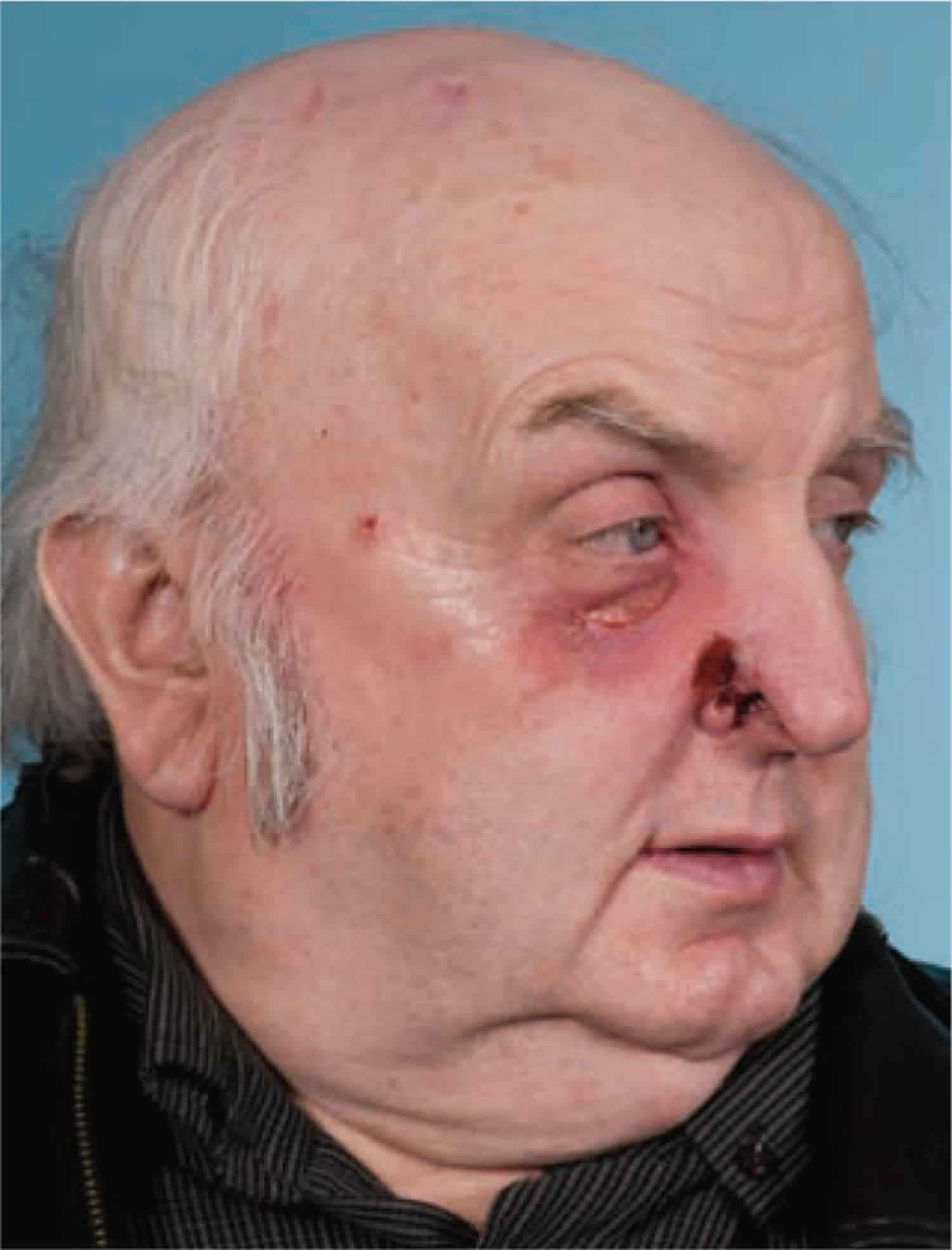 The first sign is a small crust that leads to a crescent-shaped ulcer on the side of the nose. The characteristic shape helps in distinguishing it from other possible causes. The ulcer may extend to the cheek and lips. Healing leads to fibrosis (scarring), and the lip may be drawn up into a characteristic sneer.

Similar lesions may also occur in the corners of the eyes, scalp or inside the mouth. The tip of the nose is characteristically spared because it derives sensation from a different nerve, the medial branch of the anterior ethmoidal nerve.

Patients complain of picking, rubbing, or scratching sensations in the affected areas; these sensations are attributed to hyperesthesia (an abnormal increase in sensitivity to stimuli), paraesthesia (abnormal sensation, typically tingling or pricking also called ‘pins and needles’), or pain following damage of the sensory trigeminal fibers or nuclei.

Trigeminal trophic syndrome differs from dermatitis artefacta or compulsive skin picking as there is an identifiable neurological abnormality. The patient is aware of the problem and readily admits to manipulation of the area. Even so, it can be commoner in individuals with psychological disorders.

The diagnosis of trigeminal trophic syndrome should be suspected when there is unilateral facial ulceration, especially involving the ala nasi associated with sensory impairment.

The management of trigeminal trophic syndrome is often difficult 3). Application of occlusive dressings can reduce trauma of the affected area. Hydrocolloid dressings help the ulcers heal. Transcutaneous electrical nerve stimulation was reported to be of use in some cases. Treatment regimens involving amitriptyline and diazepam in addition to chlorpromazine and pimozide have met with some success. Carbamazepine is an effective therapy in trigeminal neuralgia and atypical facial pain because these agents may influence both the paresthesias and behavioral factors in trigeminal trophic syndrome 4). 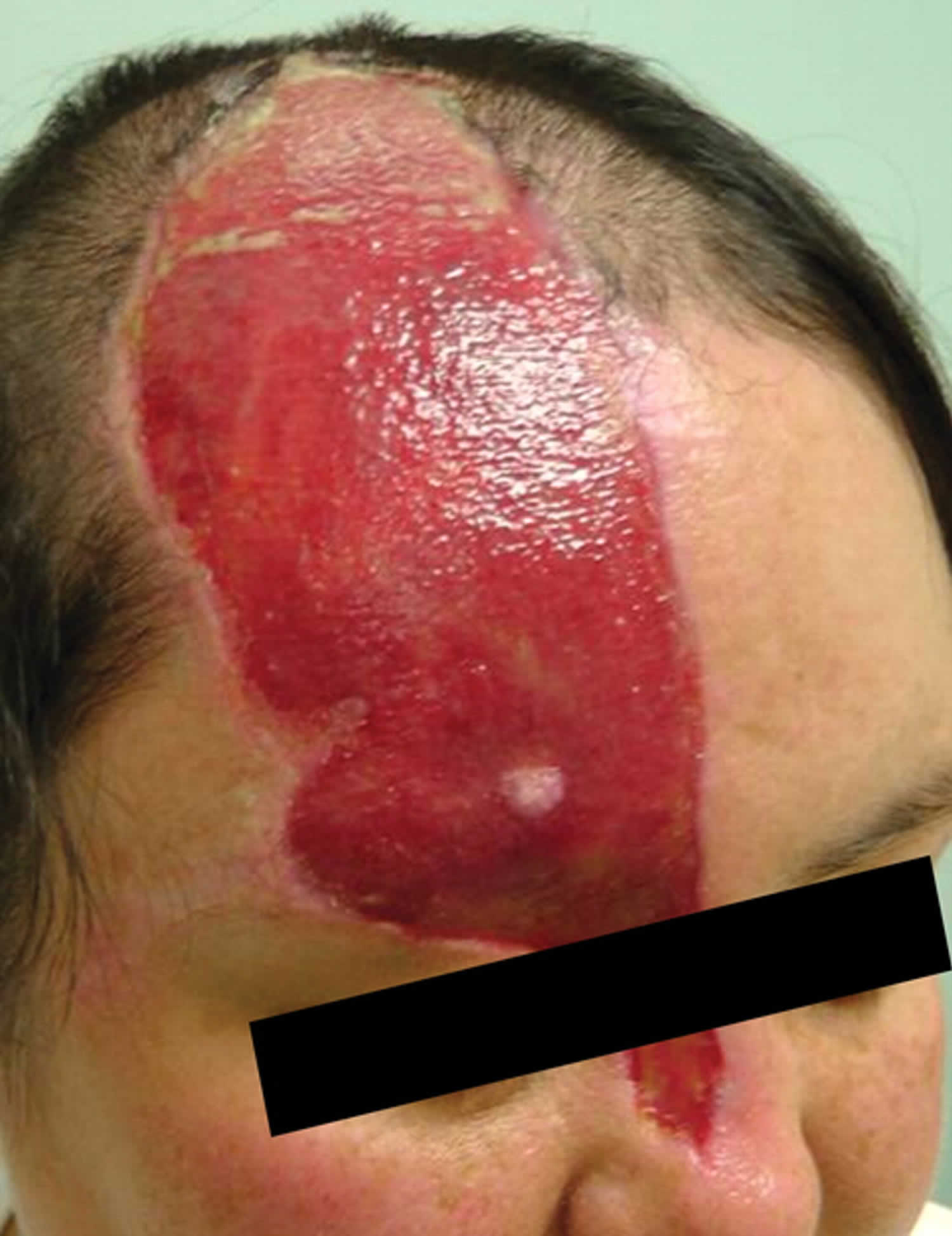 The average period from the time of trigeminal nerve injury to the onset of the ulcer varies from several weeks to many years, with an average of 2 years 7).

Other causes of facial ulceration include infections, autoimmune disorders and malignancies (cancer) 9).

Infections that need exclusion may include:

The most common skin cancers causing ulceration are:

Signs of trigeminal trophic syndrome begin weeks to decades after the injury to the trigeminal nerve – generally around a year later (average of 2 years) 10).

Some people with trigeminal trophic syndrome complain of a blocked nose or a foreign body in a nostril purely because of the loss of sensation which impairs the ability to perceive air flowing through the nostril.

There may be a delay in recognizing the association of a unilateral ulcer on the trigeminal area (first and second branch of trigeminal nerve), with the underlying nerve damage. These chronic ulcerating lesions can typically be observed in the nasal ala and paranasal areas but may be seen to involve any of the ophthalmic (V1) maxillary (V2) or mandibular (V3) nerve distributions 11). Often, the ala nasi is involved with a characteristic painless, sickle-shaped lesion. The margins are free, and the ulcer base has scant crust. Other areas may be involved with these ulcers, including the frontal scalp (resulting in triangular frontoparietal alopecia), ear, cheek, temple, and cornea 12). Once the ulcers appear, they are extremely persistent. Rare cases of self-healing in the trigeminal dermatome are reported 13).

The diagnosis is clinical and is suggested when loss of sensation occurs in association with unilateral facial ulceration, especially involving the ala nasi. Neurological examination revealed decreased sensation of pain and thermal perception over the trigeminal area 14). This sign is very important for making the diagnosis.

Laboratory tests are often necessary to differentiate other causes of facial ulceration such as infections, autoimmune disorders and malignancies (cancer). There are no distinguishing blood tests or characteristic skin biopsy features in trigeminal trophic syndrome.

X-rays and other imaging studies may be performed to attempt to locate the site of trigeminal injury, but they may prove unhelpful. Neurophysiological studies can be helpful in evaluating function of the trigeminal nerve.

The treatment options for the trigeminal trophic syndrome are varied. Unfortunately, they are often ineffective.

Patient education about the cause of the ulceration is of paramount importance may help patients reverse destructive scratching habits 15). Covering the area to prevent self-manipulation until the wound heals may be useful.

If chronic herpes simplex virus is responsible, symptoms may respond to antiviral therapy, such as longterm oral aciclovir.

Medications such as olanzapine, gabapentin, carbamazepine, amitriptyline, chlorpromazine have been used to reduce paraesthesia with questionable benefit 16).

Transcutaneous electrical stimulation, stellate ganglionectomy and ionising radiation (radiotherapy) have also been used as a treatment in resistant cases.

Surgical grafts or a rotation flap taking tissue from the innervated unaffected side to cover the ulcer has proved successful in a few cases.

Treatment remains challenging and a number of therapies, including electrical stimulation, negative pressure therapy and autologous epidermal cell transplant have been investigated with varying degrees of success 17).