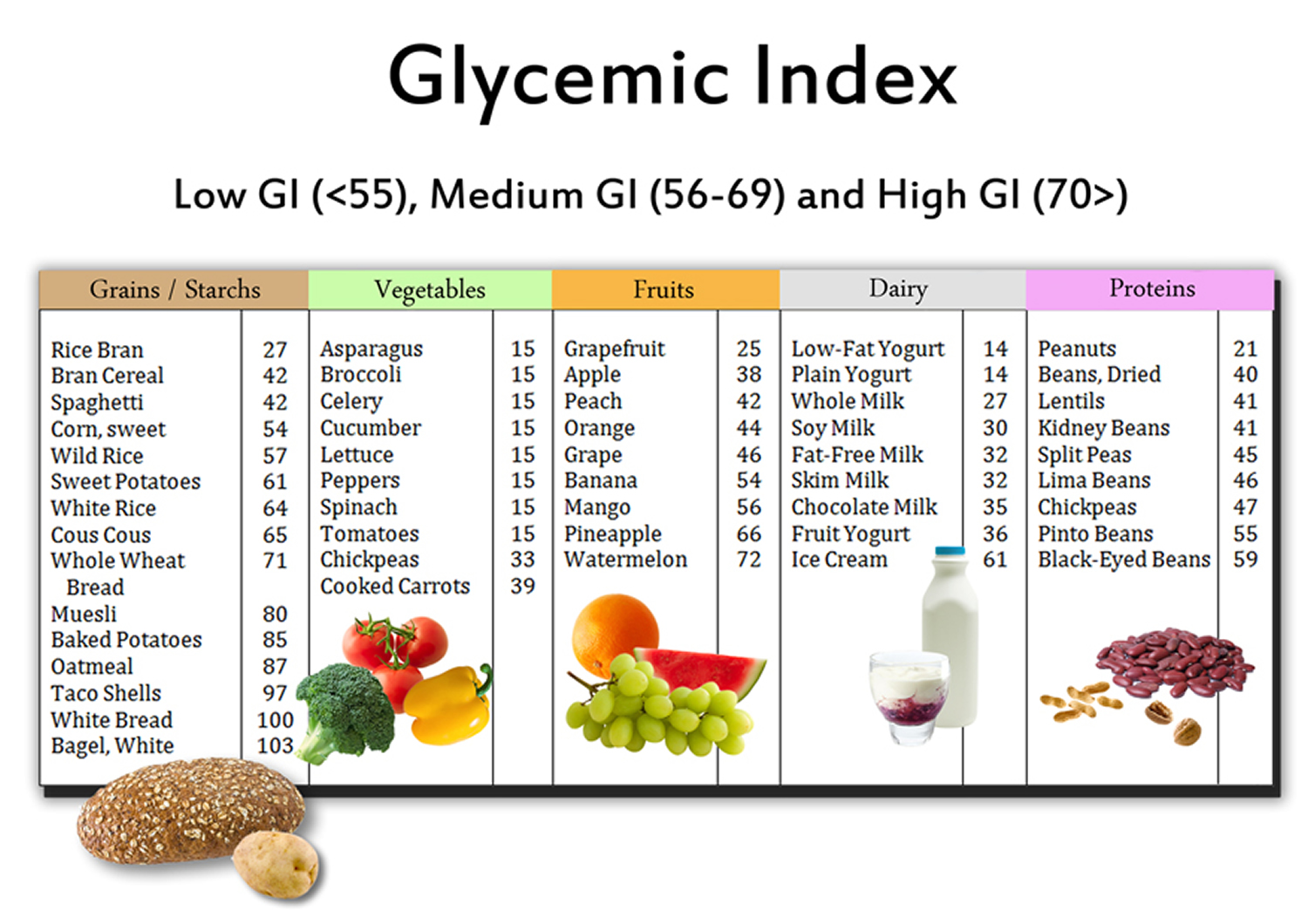 What is Glycemic Index?

Carbohydrate is an essential part of our diets, but not all carbohydrate foods are equal. The glycemic index (GI) was first developed by Jenkins and colleagues 1) and the Glycemic Index (GI) is a relative ranking of carbohydrate in foods according to how they affect blood glucose levels 2). Carbohydrates with a low GI value (55 or less) are more slowly digested, absorbed and metabolised and cause a lower and slower rise in blood glucose and, therefore usually, insulin levels.

Diabetes: There is no one diet or meal plan that works for everyone with diabetes. It is recommended that people with diabetes have moderate amounts of carbohydrate and include high fibre foods that also have a low GI (not all high fibre foods have a low GI). Because the type of carbohydrate can affect blood glucose, using the GI may be helpful in “fine-tuning” blood glucose management. In other words, combined with carbohydrate counting, it may provide an additional benefit for achieving blood glucose goals for individuals who can and want to put extra effort into monitoring their food choices. The amount of carbs you eat has a bigger effect on blood glucose levels than GI alone. For example, pasta has a lower GI than watermelon, but pasta has more carbs than watermelon, so if you eat similar amounts of either of these two foods, the pasta will have more of an impact on your blood glucose levels. The most important thing to do is get your portion size right – once you do this, you will get an added bonus for choosing low-GI alternatives.

Meats and fats don’t have a GI because they do not contain carbohydrate.

Some research has shown that by eating a diet with a lower GI, people with diabetes can reduce their average blood glucose levels. This is important in reducing the risk of developing diabetes-related complications.

The GI index runs from 0–100 and usually uses glucose, which has a GI of 100, as the reference. Slowly absorbed carbohydrates have a low GI rating (55 or below), and include most fruits and vegetables, milk, some wholegrain cereals and bread, pulses and basmati rice. GI numbers are to be used as a guide only as individual foods do not have the same response in all people with diabetes.

Below are examples of foods based on their GI.

Not all low-GI foods are healthy choices – chocolate, for example, has a low-GI because of its fat content, which slows down the absorption of carbohydrate.

*Low-GI varieties were also identified.
†Average of all available data.

The GI should not be used in isolation; the energy density and macronutrient profile of foods should also be considered 3).

Remember, GI is not a reflection of how healthy a food is.

The GI value relates to the food eaten on its own and in practice we usually eat foods in combination as meals. Bread, for example is usually eaten with butter or margarine, and potatoes could be eaten with meat and vegetables. Therefore relying solely on the glycemic index of foods could result in eating unbalanced and un-healthy diets high in fat, salt and saturated fats.

Note: The amount of carbohydrate you eat has a bigger effect on blood glucose levels than GI alone.

Carbohydrates are an essential nutrient. You need carbs as they break down into glucose in your body providing the:

Consuming good quality carbohydrates aka Low GI ones help to facilitate the management of diabetes, weight loss and weight loss management and reducing the risk of developing type 2 diabetes, diabetes complications and other chronic lifestyle diseases.  In fact a low GI diet provides health benefits for everybody across all stages of life.

A low GI diet is not a fad diet but a way of eating that is sustainable in the long term and backed by over 30 years of scientific evidence.

Recommendations for using GI in your diet 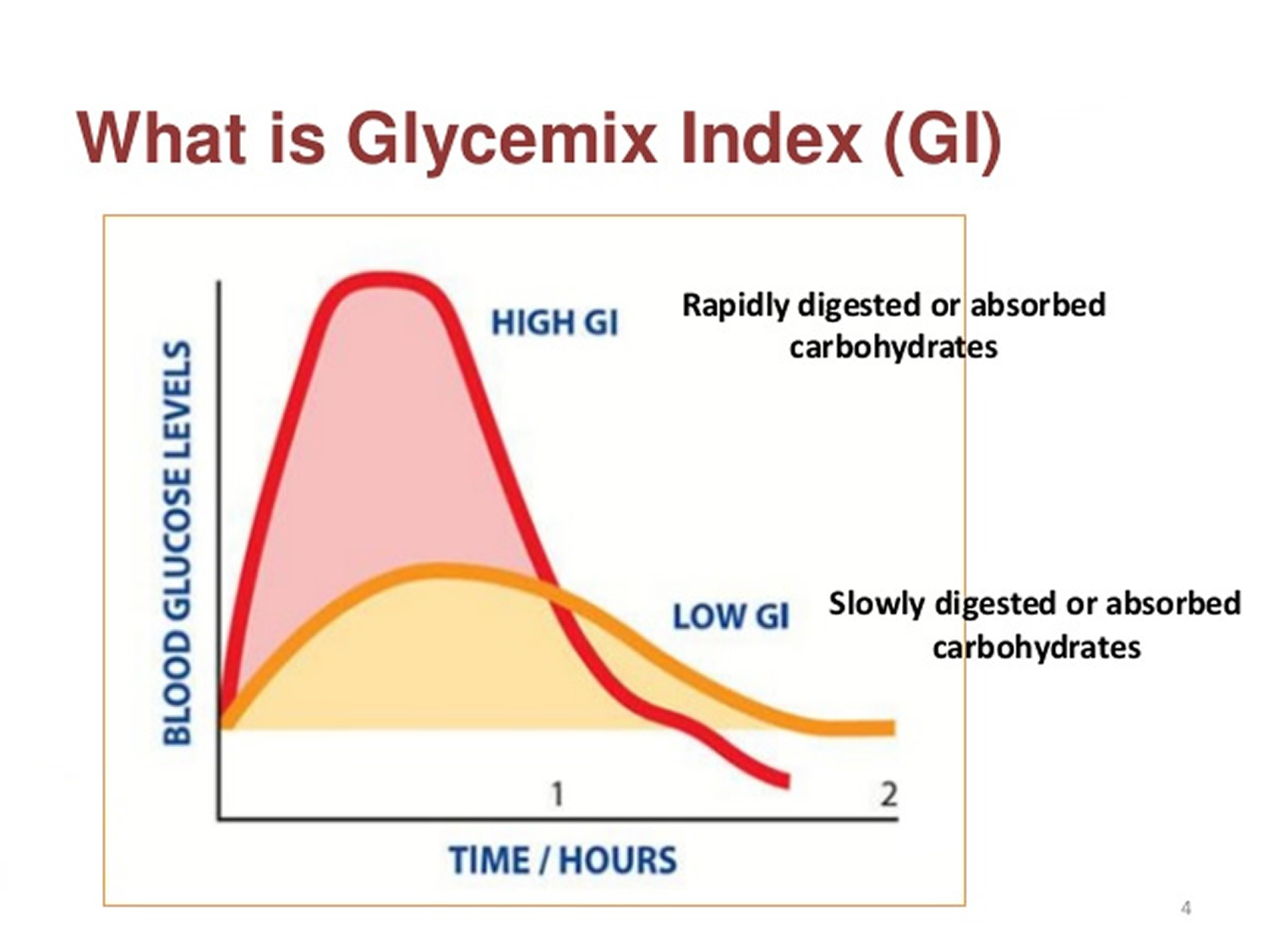 What Affects the GI of a Food?

Fat and fiber tend to lower the GI of a food. As a general rule, the more cooked or processed a food, the higher the GI; however, this is not always true 5).

Below are a few specific examples of other factors that can affect the GI of a food 6):

It’s easy to include low-GI carbs in everyday meals:

Most fruits have a low glycemic index (GI) because of their fructose and fiber content. Melons and pineapple have medium GI values as do some dried fruits such as dates, raisins, and sweetened cranberries.

Fruit – all types such as apples, oranges, peaches, bananas, melons. Fruit is a good source of fibre; try to eat the whole fruit rather than drinking the juice. Include at least 2 serves of fruit a day (1 serve = 1 medium piece apple, orange or pear OR 2 small kiwifruit or plums).

What is the difference between Glycemic Index (GI) and Glycemic Load (GL)?

Your blood glucose rises and falls when you eat a meal containing carbs. How high it rises and how long it remains high depends on the quality of the carbohydrates (the GI) and the quantity (the serve size). Glycemic load or GL combines both the quality and quantity of carbohydrate in one ‘number’. It’s the best way to predict blood glucose values of different types and amounts of food.

You can think of GL as the amount of carbohydrate in a food “adjusted” for its glycemic potency.

Therefore the Glycemic Load takes into account the amount of carbohydrate consumed and is a more accurate measure of the impact of a food on blood sugars. As a general rule foods that have a low GL usually have a low GI and those with a medium to high GL value almost always have a very high GI value.

Here is an abbreviated chart of the glycemic index and glycemic load, per serving, for more than 100 common foods.

Footnotes: This kind of list does have its limitations. The GI value relates to the food eaten on its own and in practice you usually eat foods in combination as meals. Bread, for example is usually eaten with butter or vegetable-oil based spread, and potatoes could be eaten with meat and vegetables. An additional problem is that GI compares the glycemic effect of an amount of food containing 50g of carbohydrate but in real life you eat different amounts of food containing different amounts of carbohydrate. The amount of carbohydrate you eat has a bigger effect on blood glucose levels than GI alone.

In a large European study looked at the role of protein and glycemic index upon weight loss maintenance 10). Researchers first implemented a very low-calorie diet to produce weight loss, then examined whether protein and glycemic index impacted weight loss maintenance. The study involving 1209 overweight adults (average age 41 years) with a body mass index (BMI) of 34. The study population was made up of 938 overweight adults from European countries who were randomly entered into one of the 4 low-calorie-diet phase plus 1 control diet of the study groups over a 26-week period, a low-calorie diet consisting of:

In conclusion, these results show that a modest increase in protein content (high-protein diet) and a modest reduction in the glycemic index (low-glycemic-index diet) led to an improvement in study completion and maintenance of weight loss 12).

There is consensus that diets low in GI and GL were relevant to the prevention and management of diabetes and coronary heart disease, and probably obesity. Moderate to weak associations were observed for selected cancers 13).

There was a significant decrease in the glycated haemoglobin A1c (HbA1c) -0.5%. Episodes of hypoglycaemia were significantly fewer with low glycaemic index or low glycaemic load compared to high GI diet in one trial (difference of -0.8 episodes per patient per month), and proportion of participants reporting more than 15 hyperglycaemic episodes per month was lower for low-GI diet compared to measured carbohydrate exchange diet in another study (35% versus 66%). No study reported on mortality, morbidity or costs. The review authors concluded a low-GI diet can improve glycaemic control in diabetes without compromising hypoglycaemic events 15). This result is consistent with another smaller trial involving eight type 2 diabetes mellitus patients who were given carbohydrate foods with either a high or low glycemic index over a 2 weeks period 16).

Although a majority of studies show a positive correlation between high glycemic foods and type two diabetes, several studies disagree with these findings. Meyer et al. 17) found that glycemic index had no effect on the prevalence of type 2 diabetes in older aged women. However, there was a strong inverse relationship between dietary fiber intake and type 2 diabetes when adjusted for age and BMI. Women consuming an average of 26 g/day of dietary fiber had a 22% lower risk of developing diabetes when compared to women only consuming 13 g/d. Schulze et al. 18) agreed with these findings with men and women showing a decreased risk of diabetes with the consumption of an additional 12 g of dietary fiber per day. According to these findings, it may be more significant to focus on an increased consumption of dietary fiber to prevent diabetes than glycemic index/load. It is also important to note that the inverse relationship between dietary fiber and diabetes observed by Meyer et al. 19) and Schulze et al. 20) was independent of age and body weight. Hu et al. 21) supported these findings while correcting for age, fat intake, smoking, alcohol, family history, exercise, and body weight. Therefore, it seems that dietary fiber is associated with type two diabetes, independent of other compounding factors.

Insoluble fiber only has a small effect on macronutrient absorption 26). Therefore, another mode of action must be present and several hypotheses should be discussed. Some suggest that insoluble fiber increases the passage rate of foodstuff through the gastrointestinal tract thus resulting in a decreased absorption of nutrients, namely simple carbohydrates. However, Weicket et al. 27) found that an increased intake of cereal fiber significantly improved whole body glucose disposal resulting in an 8% improvement of insulin sensitivity. This suggests that the mechanisms behind insoluble fiber are more peripheral and not limited to nutrient absorption. First, an accelerated secretion of glucose-dependent insulintropic polypeptide was observed directly after the ingestion of an insoluble fiber in healthy women 28). Glucose-dependent insulintropic polypeptide is an incretin hormone which stimulates postprandial insulin release. Second, insoluble fiber can result in a reduced appetite and food intake 29). This may lead to a decreased caloric intake and BMI. Third, short chain fatty acids, via fermentation, have been shown to reduce postpandrial glucose response 30), 31). Early research demonstrated that lipid infusions impaired glucose utilization 32) and oral acetate could decrease free fatty acids in the blood 33). According to Kelley and Mandarino 34), increases in free fatty acid in the blood can inhibit glucose metabolism through the inhibition of GLUT 4 transporters. Therefore, short chain fatty acids, by way of decreasing serum free fatty acids, may reduce blood glucose levels through competition in insulin–sensitive tissues.

In a study to find out if higher carbohydrate intake, glycaemic index (GI) and glycaemic load (GL) could increase your risk of developing cancer 38). Researchers reviewed the data from 3184 Caucasian American adults, what they found was that carbohydrate intake was not associated with risk of adiposity-related cancers combined or prostate and colorectal cancers 39). Furthermore, high-, medium- and low-GI foods were not associated with risk of adiposity-related cancers or prostate and colorectal cancers. Moreover, they also found that consuming healthier low-GI foods, were associated with 49 % lower breast cancer risk 40).