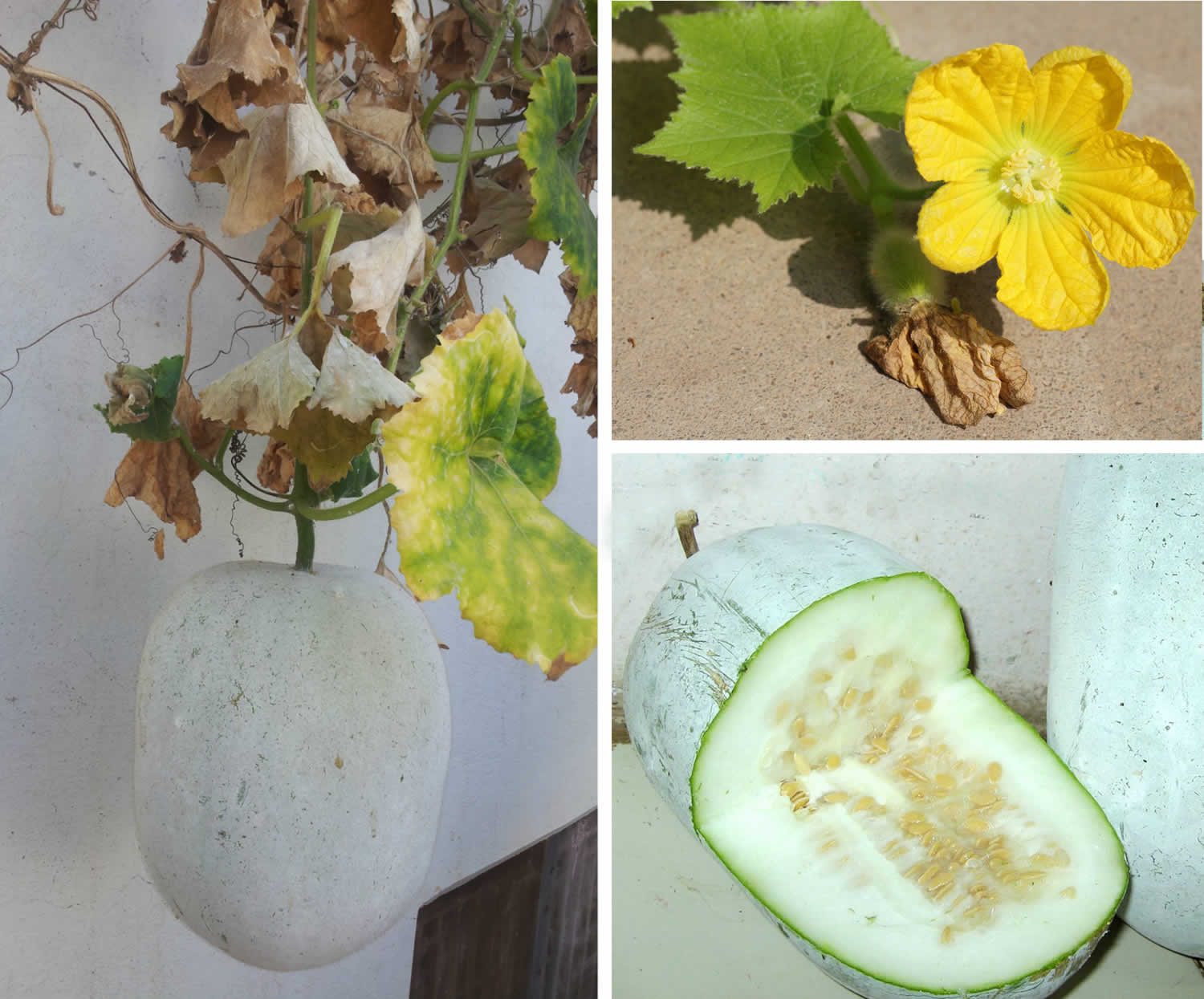 Winter melon also known as Benincasa hispida, wax gourd, ash gourd, white gourd, winter gourd, tallow gourd, ash pumpkin, winter melon, Chinese preserving melon, kundur fruit, chalkumra, and (alu) puhul, is a fruit the family Cucurbitaceae that is eaten as a vegetable when mature 1. The taste is rather bland but sweet 2. Winter melon fruit is covered in a fuzzy coating of fine hairs when young. The immature melon has thick white flesh that tastes sweet. The mature fruit sheds its hairs and forms a waxy white coating, giving the name of “wax gourd.” The gourd wax coating increases the long shelf life of it. Winter melon can grow of a length up to 80 cm and also have broad leaves and yellow flowers  3.

Winter melon is a native of South and Southeast Asia. However, it is commonly grown all over Asia, including Japan, China, Korea, Burma, Ceylon, Sri Lanka, Indonesia, and Australia 2, 4, 5.

Winter melon fruit contains 93–96% water and is rich in nutrients such as vitamin C, vitamin B2 (riboflavin), sodium (Na), and calcium (Ca) 6, 7, 8. Phenolic compounds such as astilbin, catechin, and naringenin have been isolated from winter melon fruit 9. Other bioactive compound constituents include triterpenes (alnusenol, multiflorenol, isomultiflorenol), sterols (lupeol, lupeol acetate, β-sitosterol), glycosides, saccharides, carotenes, β-sitosterin, tannins, and uronic acid 10, 11. However more studies are needed to be done to isolate and identify the bioactive chemical components contained in winter melon 12.

Several lab animal and test tube studies on the functionality of winter melon fruit extracts have reported their antioxidant, anti-inflammatory, anti-ulcerogenic, antidiabetic, and anti-Alzheimer’s efficacy (see Figure 2 below) 13, 14, 15, 16, 17, 18, 19, 20, 2. However, there have been no randomized studies on the effect of ash gourd (winter melon) on the prevention of diseases in human 21. In Chinese medicine, winter melon crust is used to treat urinary dysfunction, and the fruits are used to treat fever 21. In Ayurveda, winter melon fruits are also used to treat epilepsy, lung diseases, asthma, cough, and urinary retention 21. 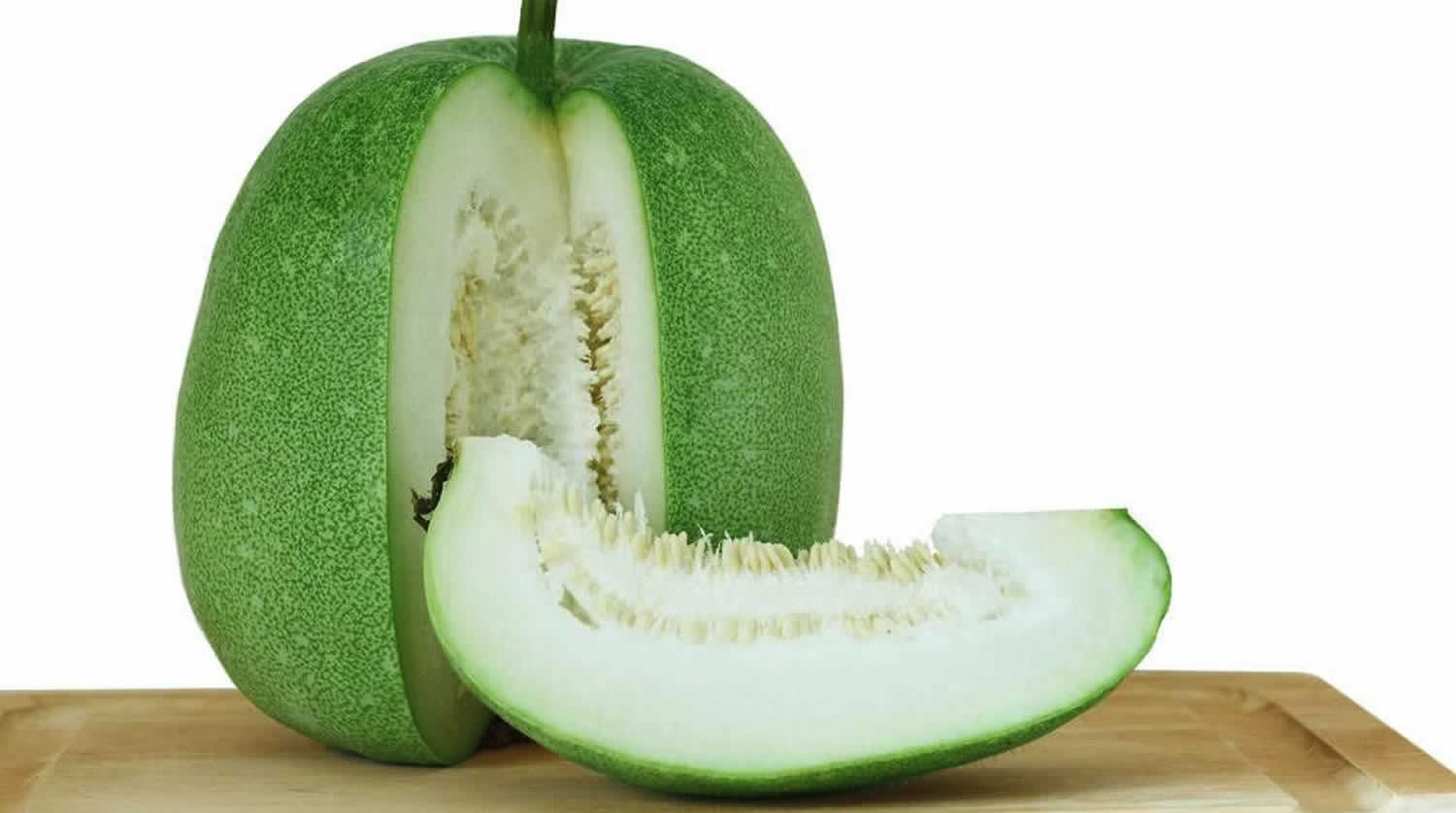 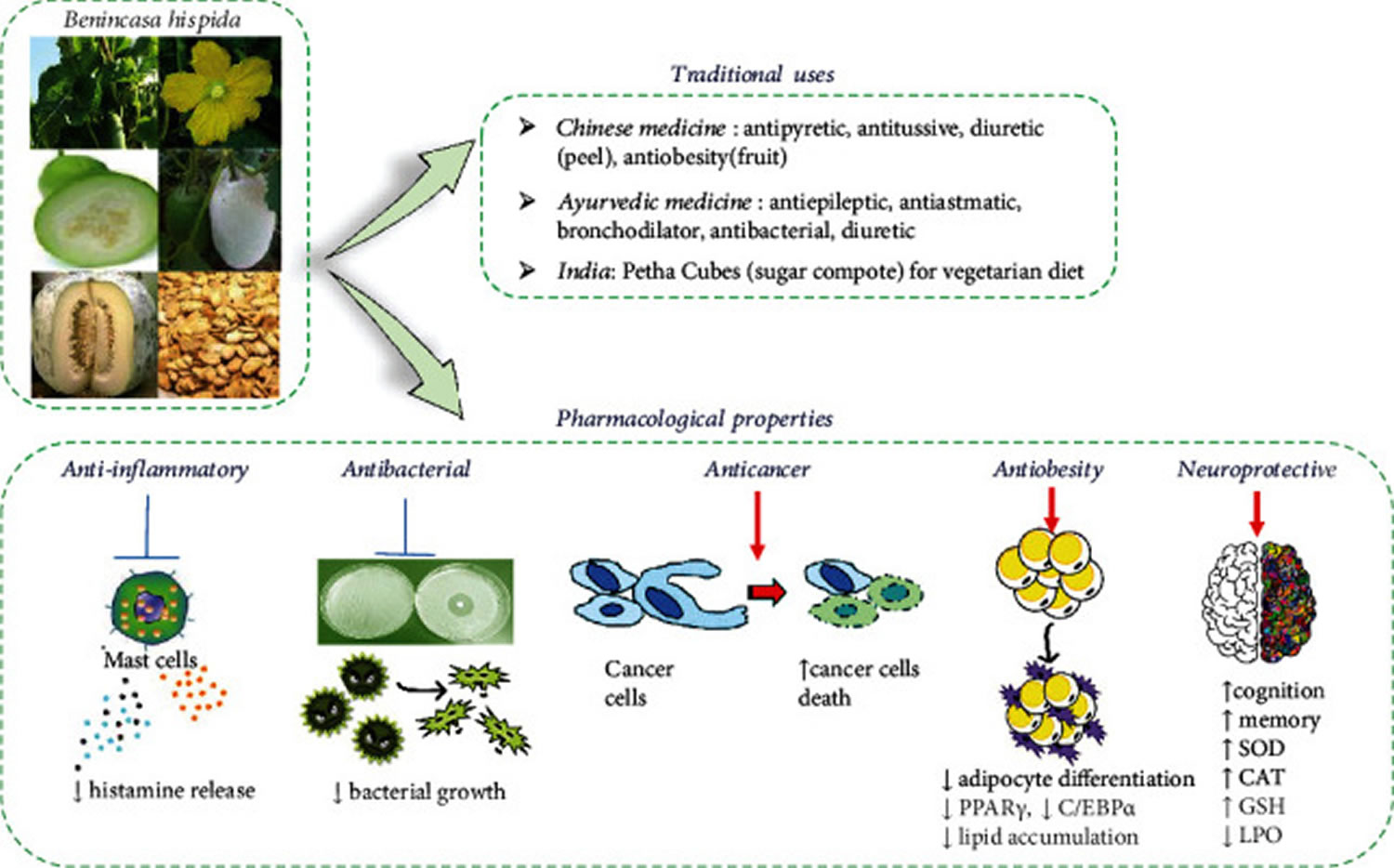 Winter melon is rich in phenolic compounds. Several other bioactive compounds present in it are isomultiflorenyl acetate, isovitexin, 1-sinapoylglucose, multiflorenol, 5-gluten-3-β-ylacetate, alnusenol, and benzylalcolcohol-O-α-l-arabinopyranosyl-(1-6)-β-d-glucopyranoside 36. The most representative phytochemicals present in winter melon is shown Table 2.

In India, winter melon is used as a winter season vegetable for a wide variety of diseases. Its medicinal properties have been also recognized in the Ayurvedic system of medicine, spiritual traditions of India and Yoga 21. In Vietnam, its soup (cooked with pork short ribs) is traditionally used by breastfeeding mothers 21. In north India and almost all regions in Bangladesh, it is added with pulses like as moong which usually crushed, along with wax gourd, makes a dish locally called bori, which after sun drying is used in curry dishes and eaten with rice or chapati 59. To make wax gourd soup in China, it is used in stir-fries or added into pork or pork/beef bones, which often served in the scooped-out gourd, carved by scraping off the waxy coating. It is also cut into pieces, candied and normally eaten during the time of New Year festivals, or used as filling in Sweetheart cake. For the Moon Festival, the Chinese and Taiwanese also used it in moon cakes as a base filling. It is candied by the people of the Philippines and is used as a pastry filling for bakpia. In some savoury soups and stir-fries, it also acts as an ingredient. In Nepal, India, and Bangladesh, the tendrils, shoots, and leaves of the plant are consumed as green vegetables 23.

Winter melon is widely used in Chinese medicine, in the treatment of fever, cough accompanied by thick mucus and urinary disorders, it is used especially in bark with a very good diuretic effect 21. The fruit is recommended for overweight people who want to follow diets 21. In Ayurvedic medicine, it is used in the treatment of epilepsy, cough, lung disease, hiccups, asthma, internal bleeding, and urinary retention. In India, a fruit compote called Petha Cubes is made from the pulp of the fruit, which is recommended for vegetarians 60.

The body’s trillions of cells face constant threat from chemicals called free radicals. In very high levels, free radicals are capable of damaging cells and genetic material. The body generates free radicals as the inevitable byproducts of turning food into energy. Free radicals are also formed after exercising or exposure to cigarette smoke, air pollution, and sunlight 62. Oxidative stress is a term used for free radical diseases 63, 64. It is defined as the imbalance between free radicals and antioxidants, given that oxidants (free radicals) are more and have a destructive potential on the human body 65, 66.

Due to the excessive use of antibiotics that can lead to the development of antibiotic resistance of various strains of bacteria 75, 76, attempts have been made to use natural antibiotic alternatives 77. Most of these options include plants with antiviral and antibacterial properties that can be effective against gram-negative and gram-negative germs, which are often difficult to eradicate 78. The methanolic ash gourd whole plant extract (500 μg/disc) was found to act against Pseudomonas aeruginosa and Vibrio parahaemolyticus 79. In the latter case, the zone of inhibition was 6 mm only. Hispidalin, an isolated compound from winter melon seeds, was found to act against several bacteria (e.g., Escherichia coli, Pseudomonas aeruginosa, Staphylococcus aureus, and Salmonella enterica) and fungi (e.g., Aspergillus flavus, Penicillium chrysogenum, Fusarium Solani, and Colletotrichum gloeosporioides) 71. In this case, the minimum inhibitory concentrations (MIC = the lowest concentration of an antimicrobial that will inhibit the visible growth of a microorganism after overnight incubation) were 30-120 and 100-200 μg/mL for bacterial and fungal strains, respectively. Moreover, the aqueous, methanol, and petroleum extracts of winter melon seeds showed significant therapeutic efficacy with methanol extract being the best comparable to the antibiotic ciprofloxacin. In other study, the aqueous peel extract showed strong antibacterial activity against S. aureus (MIC = 14.5 μg/mL), Micrococcus luteus (MIC = 8.6 μg/mL), E. coli (MIC = 6.1 μg/mL), and Klebsiella pneumoniae (MIC = 13.4 μg/mL) 20. The herb shows prebiotic activity 80. Table 4 shows the antibacterial, antihelminthic and larvacidal effects of various parts of winter melon.

Table 5 shows the cytotoxic (toxic to cells) and anti-cancer effects of various parts of winter melon.

The hydromethanol, ethyl acetate, and aqueous ripe winter melon fruit extracts (20 mg/kg, orally/alternative days) were treated for 14 days in ranitidine (5 mg/kg, orally) induced hypochlorhydria in rats 72. The aqueous extract showed better effects on the test animals. It increased the antioxidant status as well as levels of pepsin, vitamin C, and gastric juice chloride concentration than the other extracts 72. On the other hand, the extract of winter melon fruits with the whole plant of Fumaria vaillantii Loisel (earthsmoke) (1 : 1) (20 mg/kg, orally) was administrated in ranitidine (5 mg/kg) induced hypochlorhydria in rats as pre-and cotreatment manners. The extract significantly enhanced the concentration of pepsin, iron levels in serum, chloride level in gastric juice, and liver along with blood hemoglobin level in experimental animals 87.

A prospective pilot study on dyspeptic patients (n = 20) (baseline between 30 days and 45 days) aged between 18 and 45 years with only single dose of 200 mL winter melon fruit juice every morning in empty stomach for thirty days suggests that a significant improvement of pain, nausea, belching, retrosternal burning, and bowel habits among the patients 88. Table 6 shows the gastrointestinal -protective effects of various parts of winter melon.

Lipids are fatty organic substances that are the largest source of energy for the body. The vast majority of fats are stored in solid form in various organs or skin, and a small part circulates in the blood in liquid form 109. Imbalances in lipid metabolism lead to pathophysiological changes and the appearance of chronic diseases such as cardiovascular disease, fatty liver, endocrine disorders, and diabetes 110. Methanolic fruit extract (0.2-1 g/kg) reduced food intake, suggesting anorectic activity in mice 94. Hexane fraction from the aqueous winter melon fruit extract inhibited adipocyte differentiation by blocking leptin gene expression, peroxisome proliferator-activated receptor gamma (PPARγ), and CCAAT enhancer-binding protein alpha (C/EBPα), resulting in the reduction of lipid accumulation, increased releasing of glycerol and intracellular triglycerides in 3T3-L1 cells 93.

The winter melon fruit extract at a dose of 400 mg/kg (orally) showed a protective effect on colchicine-induced Alzheimer’s disease in rats, possibly through the presence of both vitamin E and β-carotene protecting rat neurons against oxidative stress 24. On the other hand, the aqueous fruit pulp extract (100-450 mg/kg, p.o.) dose-dependently increased SOD, CAT, and GSH, while reduced in LPO levels in the colchicine-induced Alzheimer’s rat model 24.

Effects on memory and cognitive behavior

Petroleum ether, methanolic, and aqueous winter melon fruit extracts (100, 200, and 400 mg/kg, p.o.) confirmed a dose-dependent anxiolytic activity in mice 108. Effects of various parts of winter melon on the nervous system are shown in Table 7 above.

Effects of various parts of winter melon on the kidney are shown in Table 7 above.

Winter melon safety and side effects

The fresh ash gourd juice (5% v/v) treatment for 3 months did not change the total white blood cells (WBC), red blood cells (RBC), hemoglobin (HB), mean corpuscular haemoglobin (MCH), hematocrit (HCT), mean corpuscular volume (MCV), sugar, and urea levels in rats and mice 60. The treatment also caused no behavioural changes in experimental animals 60. The methanolic extract of winter melon fruit was nontoxic and did not cause the death of mice, rats, and guinea pigs in doses up to 3.0 g/kg 101. Other studies, performed in female and male rats, concluded that the standardized hydroalcoholic (70% ethanol) extract of the fruit pulp of winter melon administered orally was relatively safe when to female and male rats 112. Up to oral dose (1000 mg/kg body weight/day) level, no-observe-adverse-effect-level (NOAEL) was obtained for the extract in the 90-days toxicity study. The ethanolic seed extract up to 5000 mg/kg (orally) did not exert toxicity in rats 104. There is a report of Di-2-ethylhexyl phthalate (DEHP), a popularly used plasticizer, contaminated winter melon fruit collected from southern and northern provinces in China and is harmful to human health 41.