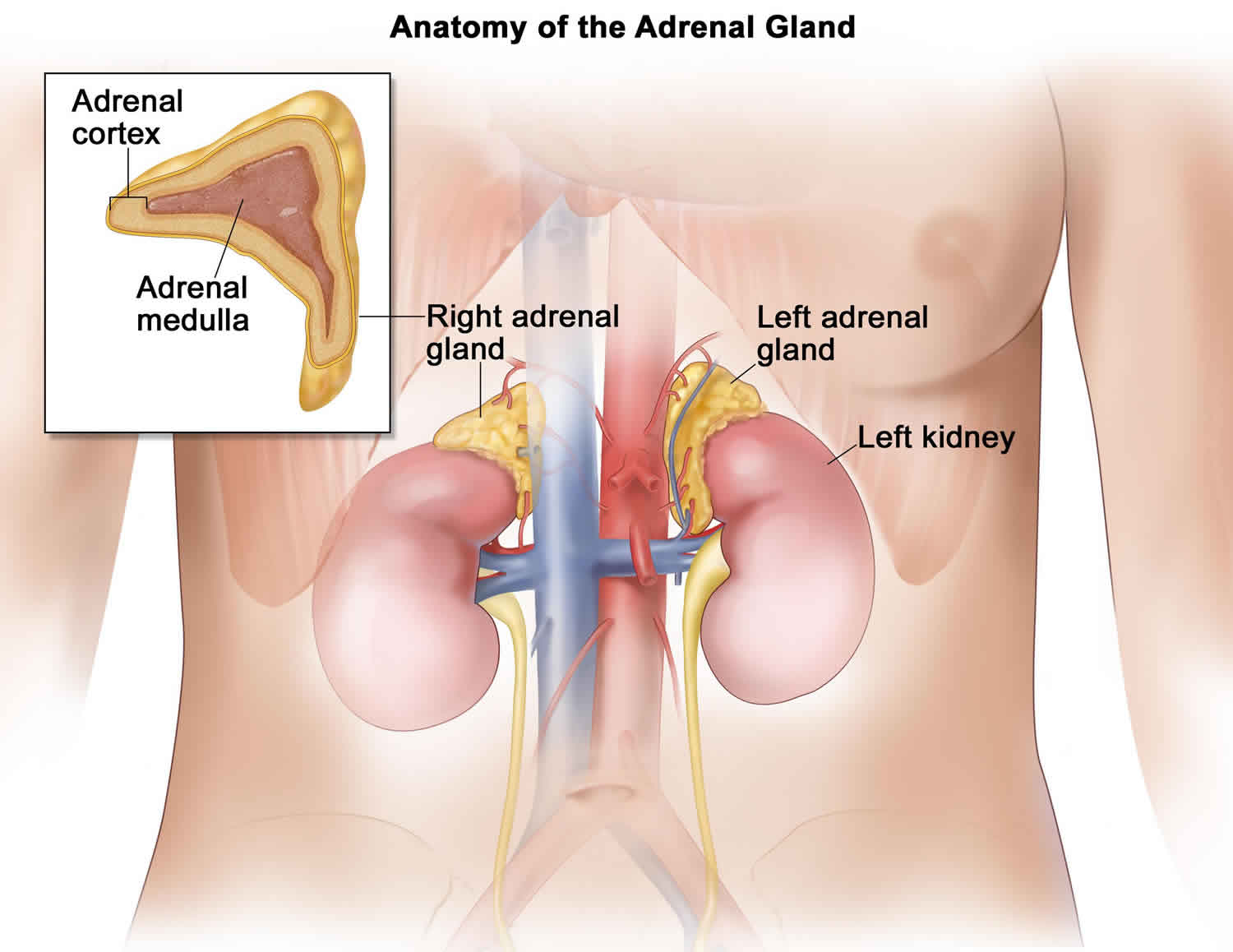 What is adrenal adenoma

Adrenal adenoma is a benign adrenal tumor, which are non-cancerous mass that forms in the cortex of the adrenal glands. Adrenal adenomas are often found by chance in patients having scans for other reasons. When benign tumors are found by chance doctors sometimes call them incidentalomas. Adrenal adenoma is found most commonly in middle-aged and older adults. The average age of a person diagnosed with an adrenal gland tumor is 46. However, adrenal adenomas can occur at any age. As part of your endocrine system, the adrenal glands produce steroid hormones that give instructions to virtually every organ and tissue in your body.

You have two adrenal glands, one above each kidney. Each gland contains two types of tissue: the cortex and the medulla. Benign adrenal tumors that develop in the medulla are also called pheochromocytomas.

Adrenal adenomas can make too much of any of these hormones. The hormones may cause symptoms that affect your whole body. The hormones include:

The most common hormones that can be over-secreted are aldosterone and cortisol from the cortex and adrenaline (epinephrine) hormones from the medulla. In these cases, treatment for benign adrenal tumors may include surgery or medications.

Adrenal adenomas often don’t need any treatment unless they are growing or making large amounts of steroid hormones.

The majority of adrenal adenomas are “nonfunctioning”, which means they do not produce hormones and usually do not cause any symptoms. They are often found incidentally during imaging studies of the abdomen, in which case they are referred to as adrenal incidentalomas. However, some can become “functioning” or “active” and secrete excess hormones. Depending on the type of hormone released, adrenal tumors can cause a variety of conditions, including Cushing’s syndrome, primary aldosteronism, or much less commonly, virilization.

Excessive levels of cortisol causes a problem known as Cushing syndrome. Some people have all of these symptoms, but many people with high cortisol levels have only a few. Possible signs and symptoms include:

Some people with immune system problems or some cancers, such as lymphomas, are treated with drugs chemically related to cortisol.

Because there are so many causes of high cortisol levels that can lead to Cushing syndrome, doctors do a number of tests to find out whether the patient has an adrenal cortical tumor or some other cause of Cushing syndrome.

The main signs and symptoms caused by aldosterone-producing adrenal adenomas (primary aldosteronism or Conn syndrome) are:

In children, symptoms are most often caused by the androgens (male-type hormones) that the tumor secretes. The most common symptoms are excessive growth of facial and body hair (such as in the pubic and underarm areas). Male hormones may also enlarge the penis in boys or the clitoris in girls.

If the tumor secretes estrogens (female-type hormones), girls can start puberty early. This can cause breasts to develop and menstrual periods to start. Estrogen-producing tumors can also enlarge breasts in boys.

The symptoms from high levels of sex hormones are less noticeable in adults because they have already gone through puberty and have breasts and adult patterns of body hair. Women with estrogen-producing tumors and men with androgen-producing tumors usually do not have any symptoms from the hormones, so they might not have symptoms until the tumor is large enough to press on nearby organs.

Symptoms are easier to notice if the tumor is making the hormone usually found in the opposite sex. For example, men with tumors that make estrogen may notice their breasts becoming enlarged and tender. They may also have sexual problems such as erectile dysfunction (impotence) and loss of sex drive. Women with tumors that make androgens (male hormones) may notice excessive facial and body hair growth, a receding hairline, irregular menstrual periods, and deepening of their voice.

Symptoms caused by a large adrenal adenoma pressing on nearby organs

As an adrenal adenoma grows, it presses on nearby organs and tissues. This may cause pain near the tumor, a feeling of fullness in the abdomen, or trouble eating because of a feeling of filling up easily.

Your doctor will evaluate your adrenal adenoma to identify its cause and hormone production. This may include:

Your doctor also will need to know your family history of adrenal tumors, other kinds of tumors, syndromes that come with tumors, high blood pressure, or Cushing syndrome.

In addition to a thorough physical examination, the following tests may be used to diagnose an adrenal gland tumor:

Blood and urine tests. Blood and urine tests help measure the amount of adrenal hormones, which can detect a functional tumor. A 24-hour urine sample may also be needed. This test requires a person to collect all of his or her urine for an entire 24-hour period, so it can be used for laboratory testing. The test results help the doctor track how quickly various hormones are produced.

One specific hormone doctors look for with these tests is the stress hormone cortisol. A specific test, called a dexamethasone-suppression test, checks your cortisol levels. For this test, you may be asked to take a pill the evening before. This pill contains a drug that acts like cortisol in the body. When someone who does not have an adrenal gland tumor takes this drug, his or her body will make less cortisol and other hormones. However, if someone has an adrenal gland tumor, cortisol levels will remain high even after taking the drug. Tell your doctor about any medications that you take, even over-the-counter drugs, vitamins, and herbal medications, because this information is needed to correctly interpret the results.

Biopsy. A biopsy is the removal of a small amount of tissue for examination under a microscope. If the doctor suspects that cancer has spread to the adrenal gland from another part of the body, a biopsy may be done to find out where the cancer began, which can help the doctor plan treatment. If this is necessary a narrow, hollow needle is used to collect the tissue. This is called a fine-needle biopsy or fine-needle aspiration. The biopsy is performed by a radiologist who uses specialized imaging procedures, such as CT scans (see below), to guide the needle directly into the tumor. A pathologist then analyzes the sample(s) removed during the biopsy. A pathologist is a doctor who specializes in interpreting laboratory tests and evaluating cells, tissues, and organs to diagnose disease.

CT or CAT scan. A CT scan creates a 3-dimensional picture of the inside of the body using x-rays taken from different angles A computer then combines these images into a detailed, cross-sectional view that shows any abnormalities or tumors. Sometimes, a special dye called a contrast medium is given before the scan to provide better detail on the image. This dye is often injected into a patient’s vein through a peripheral intravenous (IV) line. This line is a short, plastic tube inserted into the vein that allows the health care team to give medication or fluids.

MRI. An MRI uses magnetic fields, not x-rays, to produce detailed images of the body. MRI can also be used to measure the tumor’s size. A special dye called a contrast medium is given before the scan to create a clearer picture. This dye can be injected into a patient’s vein or given as a pill to swallow.

Metaiodobenzylguanidine (MIBG) scan. Metaiodobenzylguanidine is a chemical similar to adrenaline that will collect in a neuroendocrine tumor. A MIBG scan can show a tumor of the adrenal medulla that may not show up on an x-ray. The scan takes place over 2 consecutive days. On the first day, an injection of MIBG is given in the arm. Several hours later, pictures are taken with a special camera that can show if or where in the body the MIBG has collected. The following morning, more pictures are taken, and the process may be repeated if needed.

Adrenal Vein Sampling (AVS). In rare cases, a patient may have symptoms of a hormone-producing tumor, but CT or MRI scans may not identify a tumor or the patient may have small masses on both adrenal glands. In cases like this, an interventional radiologist can test the blood from the veins of each adrenal gland. The blood from each gland is tested to determine whether extra hormone is coming from the adrenal gland with the mass. This procedure is performed only by specialists and is done in a special radiology center.

After diagnostic tests are done, your doctor will review all of the results with you. If the diagnosis is a tumor, these results also help the doctor describe it. This is called staging.

Functional adrenal adenomas are typically treated with surgery to remove the adrenal adenoma or one or both adrenal glands. Your medical team will decide whether you need surgery based on whether it is producing hormones. Removal of the affected adrenal gland usually resolves other medical conditions that may be present as a result of elevated adrenal hormones (i.e. primary aldosteronism, Cushing’s syndrome). In some cases, functional adrenal adenomas can be treated with medications that block the function or lower the levels of the overproduced hormone 2.

If you have an inherited tumor syndrome, you may need genetic counseling.

If the adrenal adenoma is smaller than 5 cm and, based on its size or the way it looks on imaging scans, shows no evidence that it is cancerous, then laparoscopic surgery may be possible. Laparoscopic surgery is a minimally invasive technique in which the surgeon uses a lighted camera and special instruments and makes small incisions in the skin. This technique reduces pain and recovery time after surgery compared with traditional larger incisions. Laparoscopic surgery may be performed from the abdomen or back, depending on the location of the tumor and the experience of the surgeon.

If the adrenal adenoma is possibly cancerous or larger than 5 cm, surgery using 1 larger incision in the abdomen or back is recommended. If the patient has previously had abdominal surgery, an incision in the back may be easier.

Surgery is also the main treatment option for a pheochromocytoma, the tumor of the adrenal medulla that produces excess catecholamines.

If laparoscopic surgery is performed, then the person can usually leave the hospital in 1 to 3 days and resume daily activities within a week. If a larger incision is needed, then the person is usually hospitalized for up to 5 to 7 days and should not lift heavy objects for 6 weeks after surgery.

Adrenal gland surgery can cause bleeding. The tumor can also make excess stress hormones, called catecholamines. If this is the case, the patient will need to be monitored and receive medication to treat high blood pressure during surgery. Patients with a tumor that produces very large amounts of hormones may require extensive medication and preparation before surgery. They may also need to stay in an intensive care unit for a short period after the surgery is performed. Talk with your surgeon before the operation about the possible side effects that you may experience and how they will be managed.

The long-term outlook for people with adenomas of the adrenal gland is usually excellent. Although adrenal adenomas that are functional (releasing hormones) can cause other medical problems such as primary aldosteronism and Cushing’s syndrome, these conditions usually respond well to treatment with medications and/or surgery. Nonfunctional adrenal adenomas typically do not cause any problems and rarely require treatment.