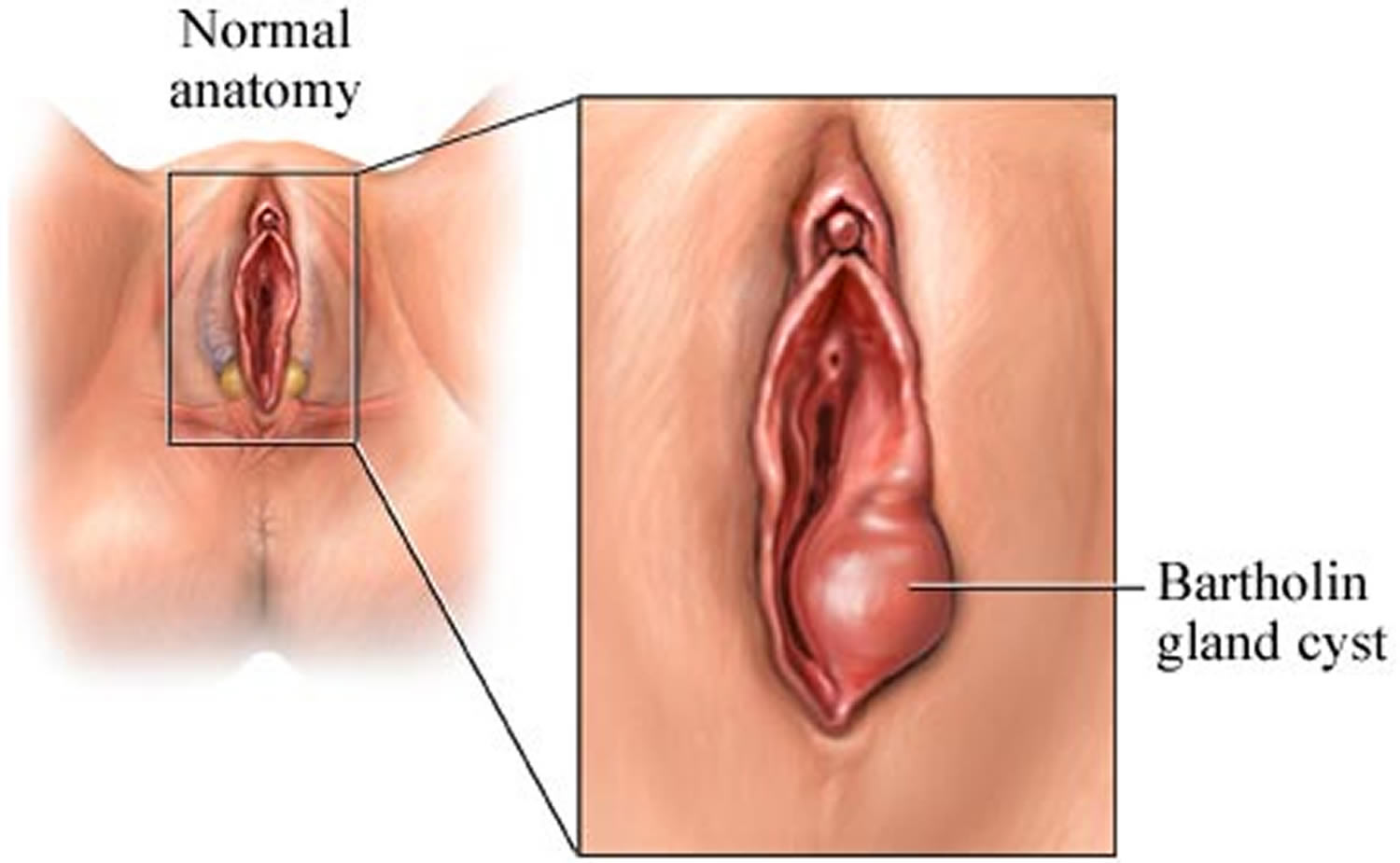 What is a bartholin cyst

The Bartholin’s glands or greater vestibular glands, are a pair of pea-sized (rarely exceed 1 cm) exocrine glands, located at 4 O’ clock and 8 O’ clock position in the labia minora and drain through 2- to 2.5-cm–long ducts that empty into the vestibule (see Figures 1 and 2). They are not palpable except in the presence of disease or infection. They resemble salivary glands in structure. They are similar to Cowper’s glands in males. They secret colorless, mucoid discharge on sexual excitation which moisturizes the vestibule. During sexual stimulation, Bartholin’s glands release lubricant fluid 1. Bartholin’s glands begin to function at puberty 2.

The first person to describe this gland was Kaspar Bartholin, in 1977. This Dane became known for describing it along with the accessory ducts of the salivary and sublingual glands 3.

Bartholin cysts are common complications of the Bartholin’s gland, affecting the ductal region due to outlet blockage. When the Bartholin’s gland duct orifice becomes obstructed, the glands produce a build-up of mucus. This build-up leads to a cystic dilation of the duct and cyst formation. Infection of this cyst is likely to result in Bartholin’s gland abscess. Duct cyst is not required for the development of abscess 4. Bartholin’s abscess and cyst account for 2% of all gynaecological visits per annum in women at child-bearing age.

One case-control study 7 found that white and black women were more likely to develop Bartholin’s cysts or abscesses than Hispanic women, and that women of high parity were at lowest risk.

Bartholin’s gland abscess has been reported to have a recurrence up to 38% 2.

Bartholin’s gland abscess presents with a swelling in the vulva associated with pain and fever. On examination, an erythematous, localized, tender, soft, fluctuant swelling would be present in the labia minora. This is usually polymicrobial warranting broad-spectrum antibiotics 8. If not treated in time, it can rupture spontaneously but tends to recur 8.

Gradual involution of the Bartholin’s glands can occur by the time a woman reaches 30 years of age 9. This may account for the more frequent occurrence of Bartholin’s duct cysts and gland abscesses during the reproductive years, especially between 20 and 29 years of age.

Because a vulvar mass in a postmenopausal woman can be cancer, excisional biopsy may be required. Some investigators 10 have suggested that surgical excision is unnecessary because of the low risk of Bartholin’s gland cancer (0.114 cancers per 100,000 woman-years). However, if the diagnosis of cancer is delayed, the prognosis can be poor.

Lesions in the Bartholin’s gland can occur in the form of carcinomas, a rare type of gynecological tumor that accounts for 2-7% of vulvar carcinomas. This type of vulvar growth is carefully monitored among postmenopausal women who are more prone to Bartholin’s malignancy 12. The median age at which Bartholin’s gland cancer is diagnosed is 57 years old and carcinoma incidence is highest among women in their 60’s. The 2 common types, adenocarcinoma and squamous cell carcinoma, account for 80-90% of primary cases. The remaining 10-20% of cases include transitional, adenoid-cystic or undifferentiated carcinomas 13. Human papillomavirus is only related to squamous cell lesions. Benign tumors are rarer than carcinomas.

See your doctor if you have a painful lump near the opening of your vagina that doesn’t improve after two or three days of self-care — for instance, soaking the area in warm water (sitz bath). If the pain is severe, make an appointment with your doctor right away.

Also see your doctor promptly if you find a new lump near your vaginal opening and you’re older than 40. Although rare, such a lump may be a sign of a more serious problem, such as cancer.

The Bartholin’s glands, also called greater vestibular glands, are two pea-sized glands located at the posterior region of the vaginal opening. The glands have an oval shape with an average size of 0.5 cm and are located lateral to the bulbospongiosus muscle. The glands are homologous to the male bulbourethral or Cowper’s glands. The glands are connected to ducts, approximately 2.5 cm in width, situated between the labia minora and the hymenal edge. Through these ducts, the glands drain the mucus into the vaginal vestibule. The ducts open at the 4 and 8 o’clock position at the vaginal vestibule on each side of the vaginal opening. Embryologically, the Bartholin’s glands originate from the urogential sinus and therefore, utilize the external pudendal artery as a blood source. The gland is innervated by the pudendal nerve. The lymphatic drainage of Bartholin’s glands includes superficial inguinal and pelvic nodes. 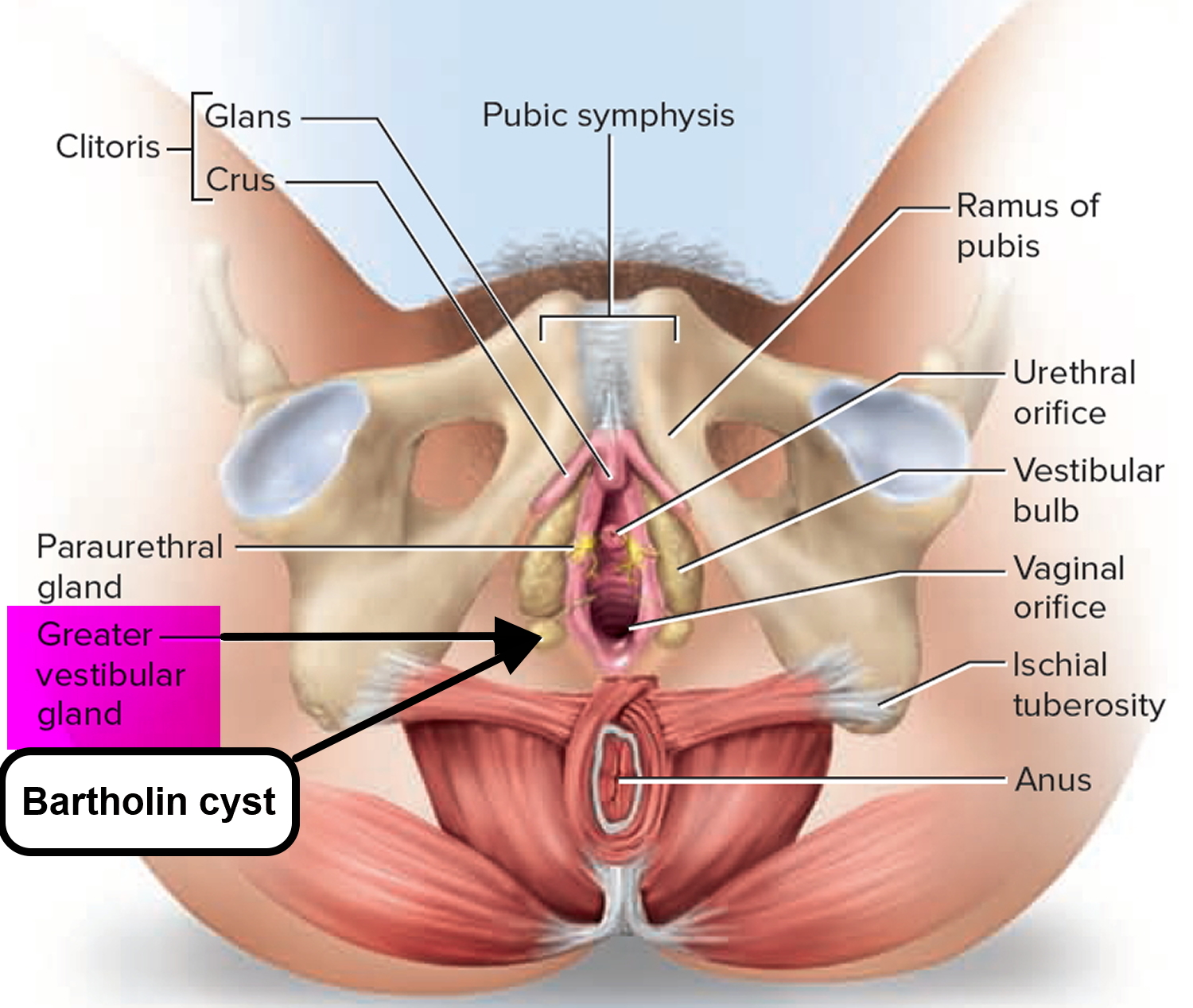 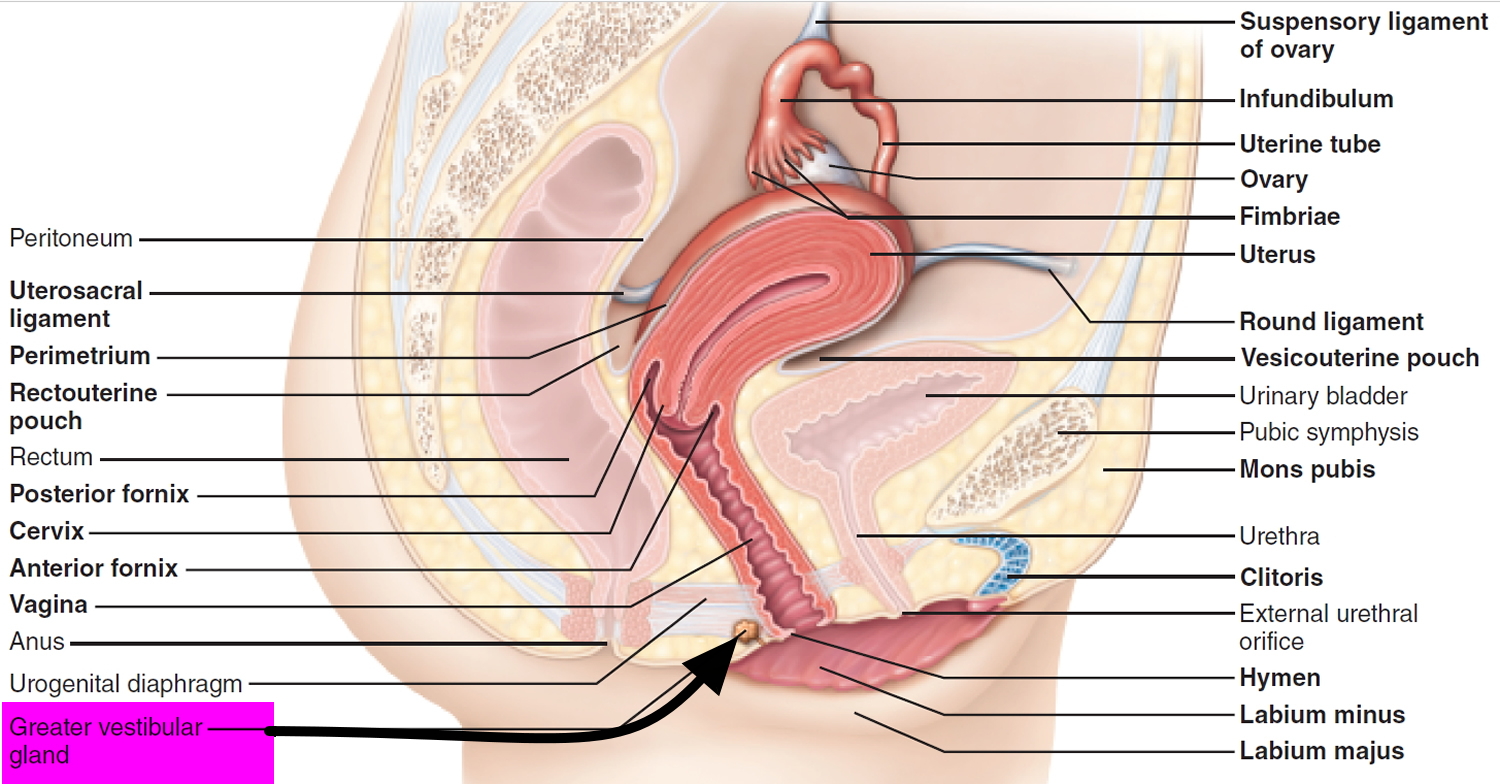 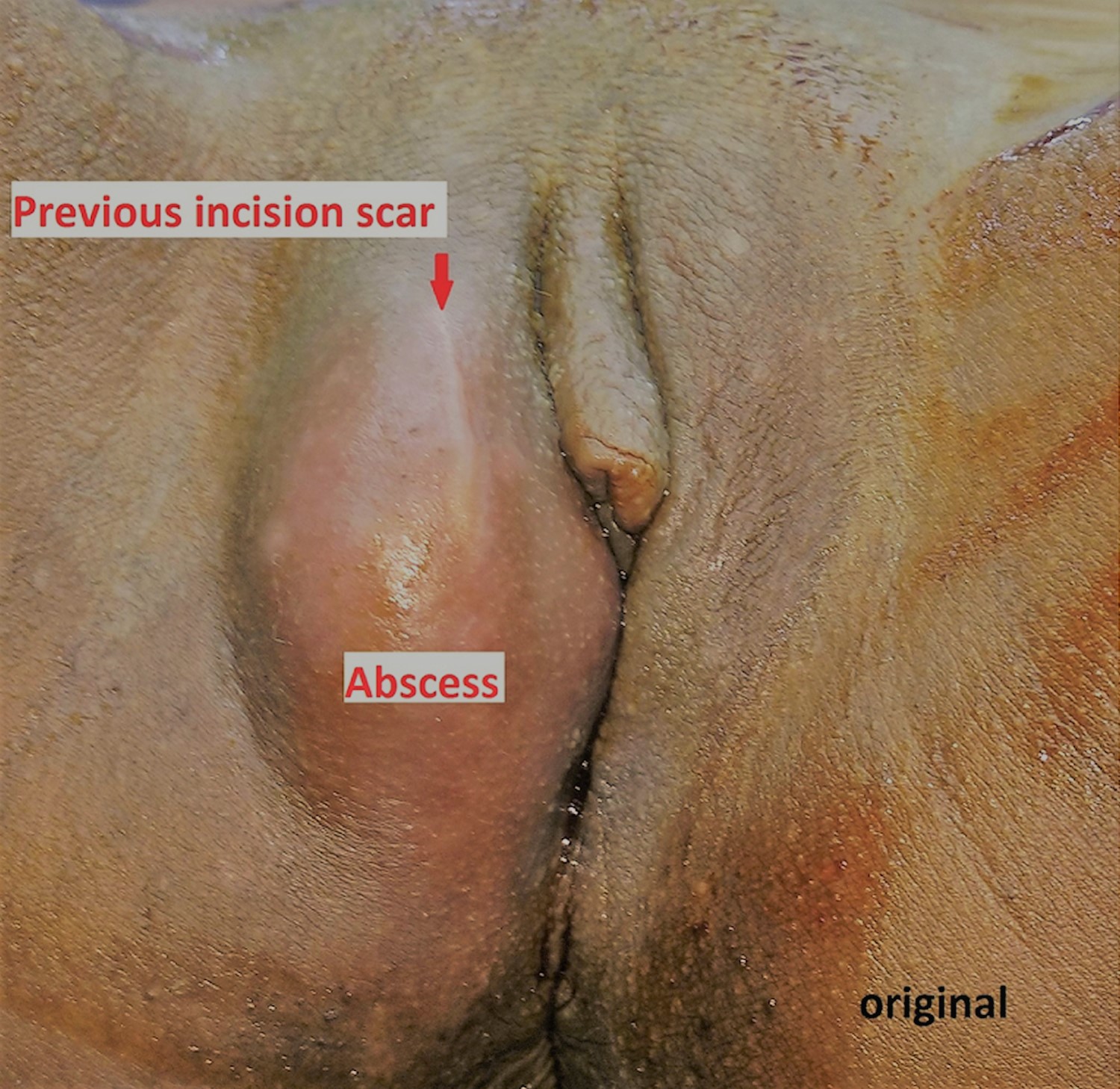 Note: A linear scar of previous incision is seen.

A Bartholin’s cyst or abscess may recur and again require treatment.

Experts believe that the cause of a Bartholin’s cyst is a backup of fluid. Fluid may accumulate when the opening of the gland (duct) becomes obstructed, perhaps caused by infection or injury.

A Bartholin’s cyst can become infected, forming an abscess. A number of bacteria may cause the infection, including Escherichia coli (E. coli) and bacteria that cause sexually transmitted infections such as gonorrhea and chlamydia.

There’s no way to prevent a Bartholin’s cyst. However, practicing safe sex — in particular, using a condom — and maintaining good hygiene habits may help to prevent infection of a cyst and the formation of an abscess.

Bartholin’s cyst may be asymptomatic if Bartholin’s cyst is small and not inflamed. However, a small Bartholin’s cyst may be observed by physicians as a small mass in the region of the Bartholin’s gland. If the cyst grows, you might feel a lump or mass near your vaginal opening. Although a cyst is usually painless, it can be tender. A painless mass may be present without surrounding cellulitis, while abscesses commonly present with cellulitis and lymphangitis. Larger cysts and abscess tend to cause severe vulvar pain and swelling such that the patient experiences difficulty in walking, sitting and engaging in sexual intercourse (dyspareunia). During examination, an abscess presents as a tender mass in the lower vestibular region surrounded by erythema and edema. When the abscess grows large enough to extend to the upper labia, it may result in skin rupture and spontaneous drain 14. The patient may experience a sudden relief of pain after a discharge, highly suggesting presence of spontaneous rupture. Cysts can present in form of inguinal hernia 15.

A full-blown infection of a Bartholin’s cyst can occur in a matter of days. If the cyst becomes infected, you may experience:

A Bartholin’s cyst or abscess typically occurs on only one side of the vaginal opening.

In neonate, Bartholin’s duct cyst associated with hydrouretero-nephrosis and contralateral renal cyst can cause urinary retention 16. In the case of Bartholin’s gland cancer, painless mass is also present in the vulva-region. Mass fixated to the underlying tissue is often suspected for malignancy. First detection of sentinel node may lead to diagnosis of adenocarcinoma of Bartholin’s gland 17.

Diagnosis of Bartholin’s gland carcinoma is established upon histological examination. Women over the age of 40 are recommended to undergo drainage and biopsy to eliminate possible occurrence of carcinoma. Due to the rarity of Bartholin’s cancer, a biopsy is recommended over excision 18. In cases where Bartholin’s cancer is suspected, diagnostic criteria is as follows. The tumor must be primarily located in the labia, the surrounding skin must remain undamaged, and there must be at least a small amount of glandular epithelium present. When Bartholin gland carcinomas are present, metastatic disease is likely due to the vulva’s extensive vascular and lymphatic network 19.

To diagnose a Bartholin’s cyst, your doctor may:

If cancer is a concern, your doctor may refer you to a gynecologist who specializes in cancers of the female reproductive system.

Often a Bartholin’s cyst requires no treatment — especially if the cyst causes no signs or symptoms 21, but symptomatic Bartholin’s duct cysts and gland abscesses require drainage. Unless spontaneous rupture occurs, an abscess rarely resolves on its own. When needed, treatment depends on the size of the cyst, your discomfort level and whether it’s infected, which can result in an abscess.

Treatment options your doctor may recommend include:

A Word catheter is commonly used to treat Bartholin’s duct cysts and gland abscesses 27. The stem of this rubber catheter is 1 inch long and the diameter of a no. 10 French Foley catheter. The small, inflatable balloon tip of the Word catheter can hold about 3 mL of saline (Figure 4).

The inflated balloon allows the catheter to remain within the cavity of the cyst or abscess (Figure 5). The free end of the catheter can be placed in the vagina 23. To allow epithelialization of the surgically created tract, the Word catheter is left in place for four to six weeks 23, although epithelialization may occur as soon as three to four weeks 26.

Sitz baths taken two to three times daily may aid patient comfort and healing during the immediate postoperative period. Sex may be resumed after catheter insertion.

If a Bartholin’s cyst or abscess is too deep, Word catheter placement is impractical, and other options must be considered 25. 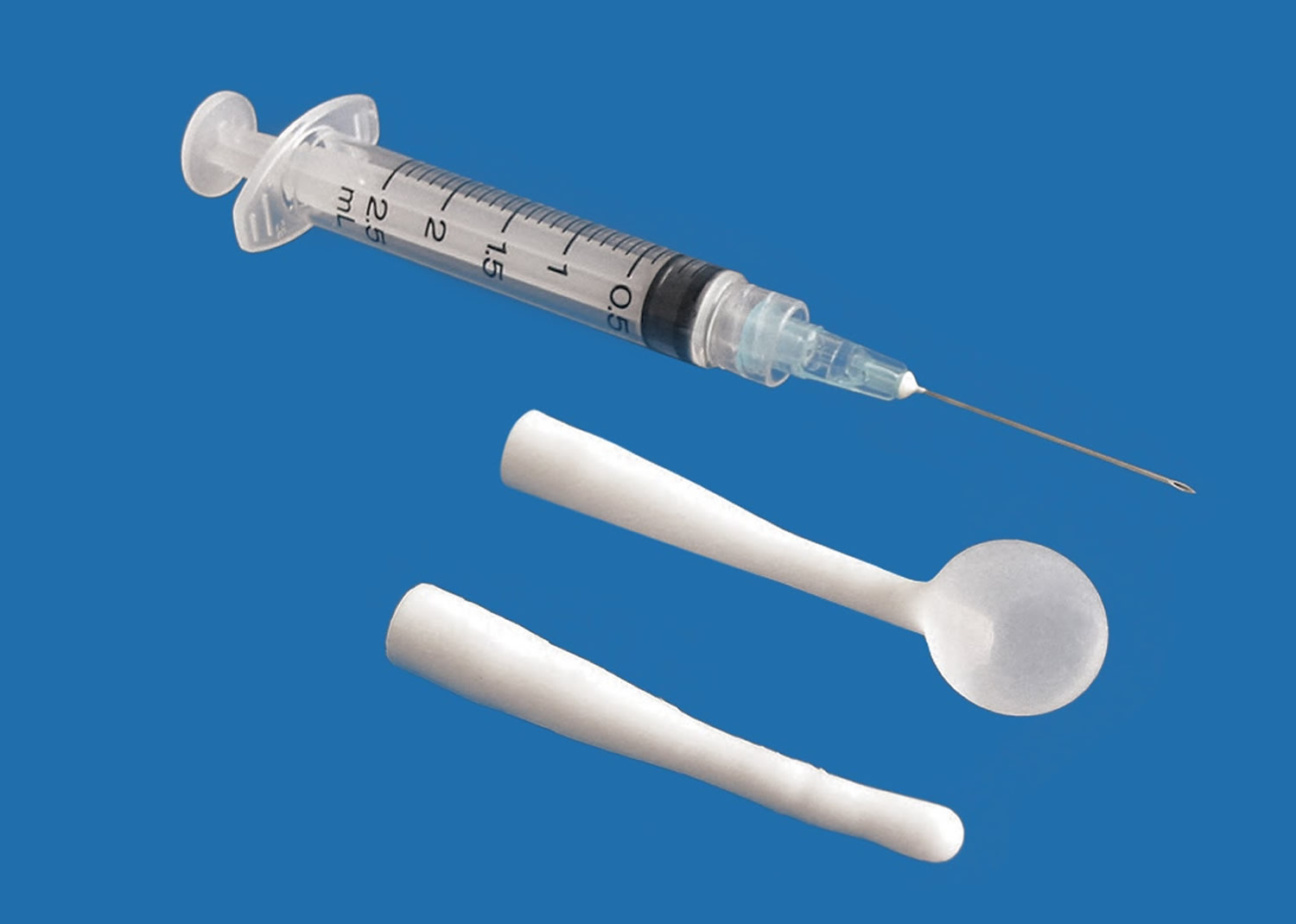 Note: (Left) A vertical incision is made over the center of the cyst to dissect it free of mucosa. (Right) The cyst wall is everted and approximated to the edge of the vestibular mucosa with interrupted sutures.

Rarely, for persistent cysts that aren’t effectively treated by the above procedures, your doctor may recommend surgery to remove the Bartholin’s gland. Surgical removal is usually done in a hospital under general anesthesia. Surgical removal of the gland carries a greater risk of bleeding or complications after the procedure.

Although Bartholin’s gland abscesses may rupture and drain spontaneously, recurrence is likely, and surgical excision may be necessary. Excision is not an office-based procedure.

Cultures for N. gonorrhoeae and C. trachomatis may be obtained. However, Bartholin’s gland abscesses tend to be polymicrobial, and empiric broad-spectrum antibiotic therapy should be used.

Excision of the Bartholin’s gland should be considered in patients who do not respond to conservative attempts to create a drainage tract, but the procedure should be performed when there is no active infection 22. If multiple attempts have been made to drain a cyst or an abscess, adhesions may be present, making excision difficult and resulting in postoperative scarring and chronic pain in the area 21.