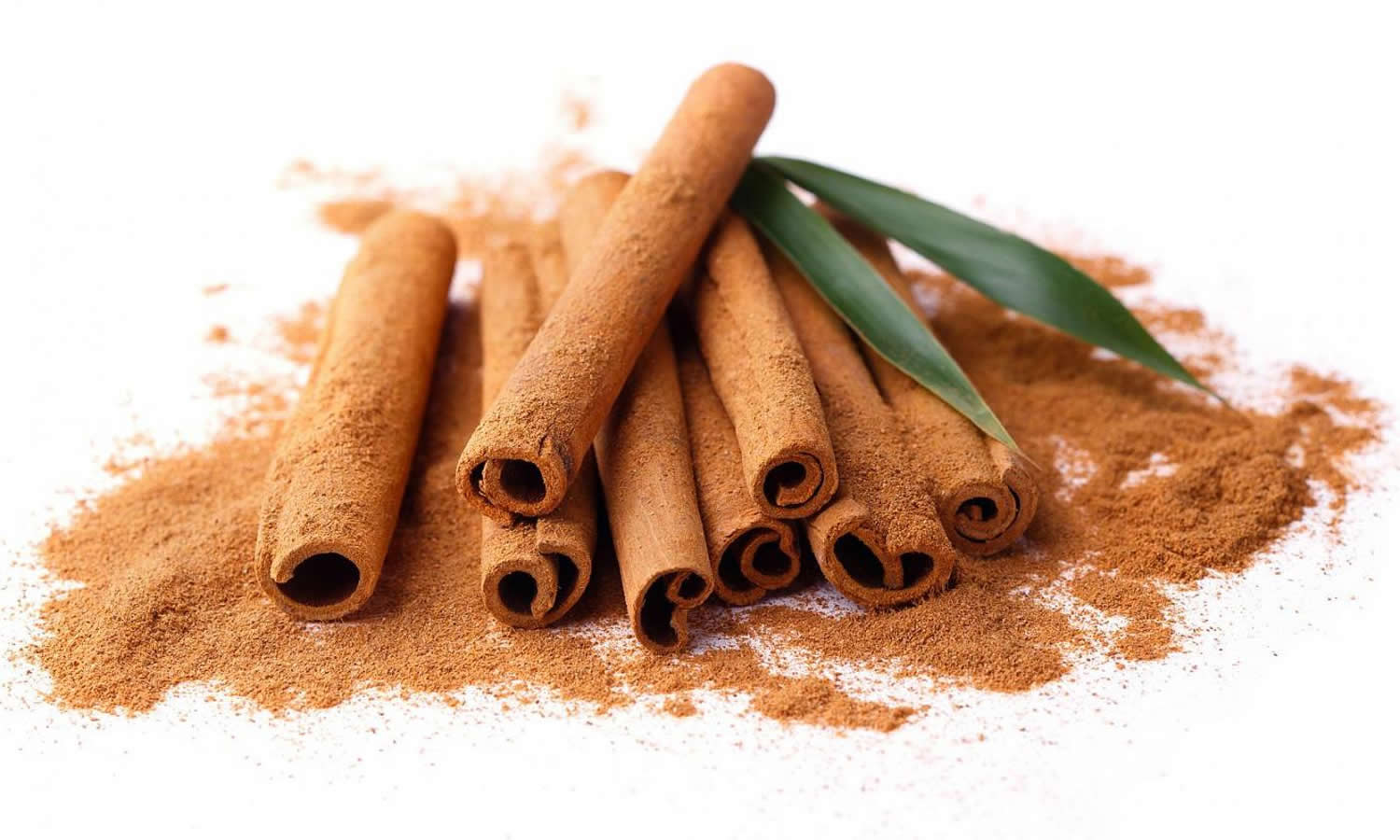 Cassia (Cinnamomum cassia Presl) commonly known as Chinese cassia or Chinese cinnamon, is one of several species of Cinnamomum from Lauraceae family used primarily for their aromatic bark. The dried stem bark of Cinnamomum cassia, i.e., cassia bark, is an important spice ingredient in food and cosmetic industry, in the United States, United Kingdom, and India, Chinese cassia is the most common type of cinnamon used. Cinnamomum cassia buds are also used as a spice, especially in India, and were once used by the ancient Romans. Cassia bark is also considered to have medicinal properties, such as antimicrobial 1, anti-cancer 2, 3, 4, anti-inflammatory 5 and anti-diabetic properties 6, 7. Cinnamomum cassia extract has anti-invasion and anti-migration effects of highly metastatic human lung carcinoma cells, while cinnamomum cassia extract exerts no cytotoxicity of normal human lung cell lines as a combination medication with adjuvant chemotherapy on human lung cancer patients 8. In addition, the methanol extract of Cinnamomum cassia twigs was found to possess tyrosinase inhibitory activity 9. Tyrosinase is known to be a key enzyme in melanin biosynthesis, involved in determining the color of mammalian skin and hair. Various dermatological disorders, such as melasma, age spots and sites of actinic damage, arise from the accumulation of an excessive level of epidermal pigmentation 10. The twigs of cassia is popularly used in China to treat inflammatory processes, pain, menstrual disorders, hypertension, fever etc 11.

Hyperuricemia is a metabolic disease characterized by elevated blood uric acid levels 12. Hyperuricemia results from increased production or impaired excretion of uric acid 13 and elevated uric acid levels cause accumulation of urate crystals in joints and the kidneys, leading to gout and gouty arthritis 14. It was also recently shown that hyperuricemia is associated with hyperlipidemia, hypertension, cardiovascular diseases, and diabetes 15. Therefore, uric acid level regulation may play an important role in the prevention and treatment of various diseases, including hyperuricemia. Uric acid is a final product of purine catabolism and is produced via the catalytic activities of xanthine oxidase, a rate-limiting enzyme responsible for converting hypoxanthine to xanthine, which is subsequently converted to uric acid 16.

Cassia is an evergreen tree originating in southern China, and widely cultivated there and elsewhere in southern and eastern Asia (India, Indonesia, Laos, Malaysia, Taiwan, Thailand, and Vietnam) 1. The cassia tree grows to 10–15 m tall, with greyish bark and hard, elongated leaves that are 10–15 cm long and have a decidedly reddish color when young. 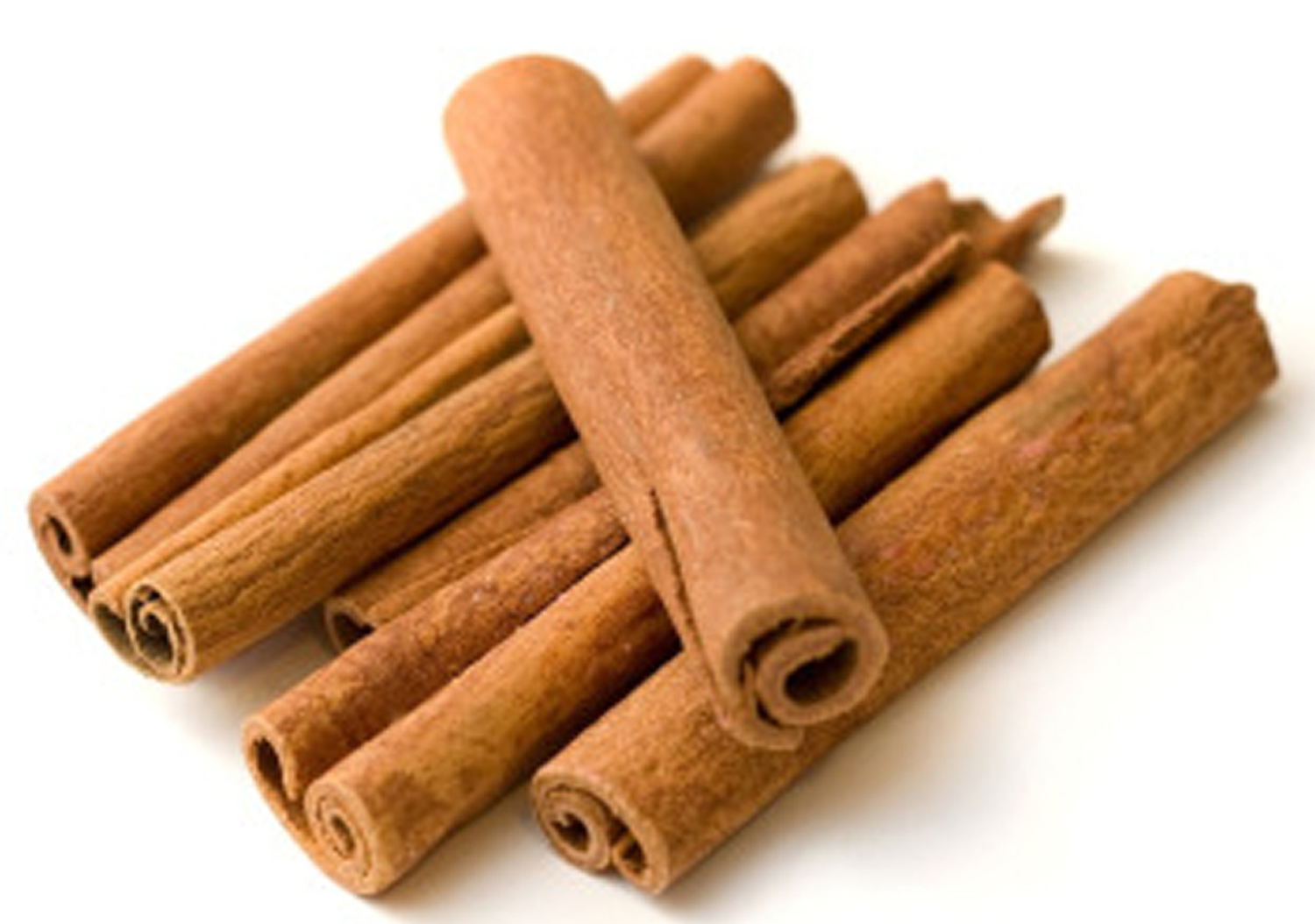 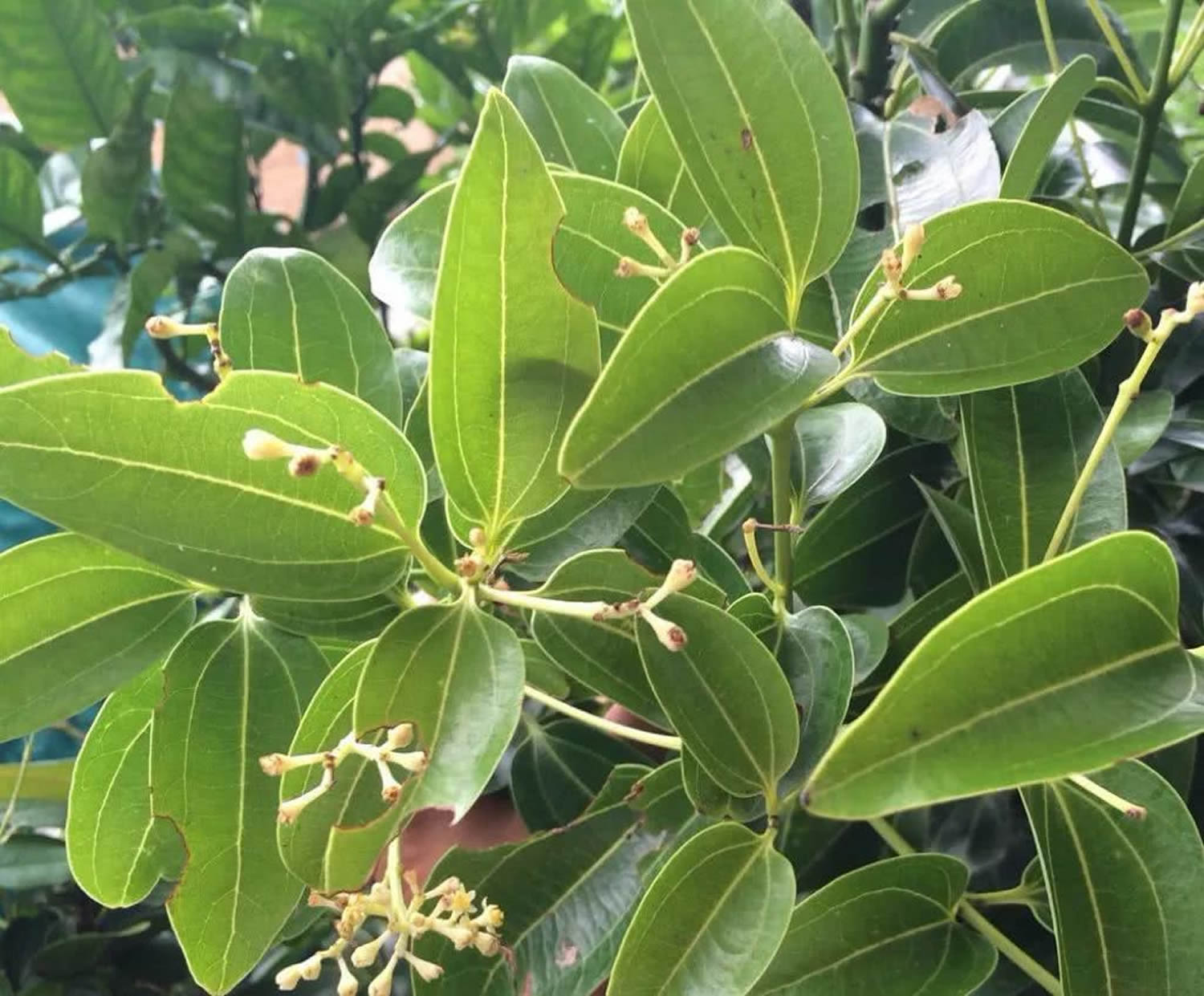 Cinnamon is a spice obtained from the inner bark of several tree species from the genus Cinnamomum. Cinnamomum verum or Sri Lanka or Ceylon cinnamon is sometimes considered to be “true cinnamon”, but most cinnamon in international commerce is derived from related species, also referred to as “cassia” 24. In 2016, Indonesia and China produced 75% of the world’s supply of cinnamon.

Cinnamomum verum (formerly Cinnamomum zeylanicum), “true cinnamon” or Sri Lanka or Ceylon cinnamon, is a small evergreen tropical tree in the Lauraceae (laurel family) that originated in Sri Lanka and is one of several Cinnamomum species that produce the commercially important spice known as cinnamon. Although Cinnamomum cassia (Cinnamomum aromaticum), which is less expensive and has a stronger flavor, is often marketed as “cinnamon,” Cinnamomum verum is generally considered to have a more delicate flavor that is more suitable for desserts.

The names “cinnamon” and “cassia” cause considerable confusion, as they are often used interchangeably. In the U.S., the spice produced from the dried, ground bark of any of Cinnamomum species is referred to as “cinnamon,” without distinguishing among species. In addition, “cinnamon” may also refer to the spice obtained from the aromatic bark of an unrelated species, Canella winterana (in the Canellaceae). When the spice is sold in bark form, rather than ground, Cinnamomum verum (Sri Lanka or Ceylon cinnamon) can be distinguished from Cinnamomum cassia (Cinnamomum aromaticum) because it comes in tight rolls (quills) rather than in looser flakes with curled edges. It can be distinguished from the related Indonesian cinnamon (Cinnamomum burmanii) by the quills having many soft layers, which can easily be ground in a coffee grinder, as opposed neat quills composed of a single extremely hard layer.

The Cinnamomum verum tree grows to around 10 m (30 ft), and has leathery leaves, usually opposite, that are lanceolate to ovate, 11 to 16 cm (4.5 to 6.25 in) long, with pointed tips. The inconspicuous yellow flowers, which are tubular with 6 lobes, grow in panicles (clusters) that are as long as the leaves. The fruit is a small, fleshy berry, 1 to 1.5 cm (0.25 to 0.5 in) long, that ripens to black, partly surrounded by a cup-like perianth (developed from the outer parts of the flower).

The spice form of cinnamon is obtained by removing the outer bark of the tree, and scraping from it the inner bark, which is dried and ground into power. Cultivated trees may also be coppiced (cut back to encourage shoot development), so that the coppiced shoots can be harvested. Cinnamon oil is steam distilled from the leaves and twigs.

Cinnamon from various species has been used as a spice since ancient times. It is widely used to flavor baked goods, puddings and other desserts, and candies, as well as soups and stews, curries, meat and poultry dishes, and pickles. Cinnamon is also used to flavor beverages, including teas and mulled wine.

FAO estimates that total commercial production of all forms of cinnamon (derived from several species of Cinnamomum, including Cinnamomum cassia (Cinnamomum aromaticum), as well as canella (Canella winterana) was 155,000 metric tons, harvested from 186,000 hectares. China, Indonesia, Sri Lanka, and Vietnam together produced around 98% of the world’s total.

Coumarins posses strong anticoagulant properties and can have potentially toxic effects on the liver 32. The coumarin content in Ceylon cinnamon (“true cinnamon”) is negligible and is not known to cause detrimental health effects, whereas the coumarin level in Cinnamomum cassia is much higher and can cause health risks if consumed in larger quantities on a regular basis 33. Several countries have restricted the regular usage of Cinnamomum cassia as a result of this potential health hazard associated with high levels of coumarins 33. 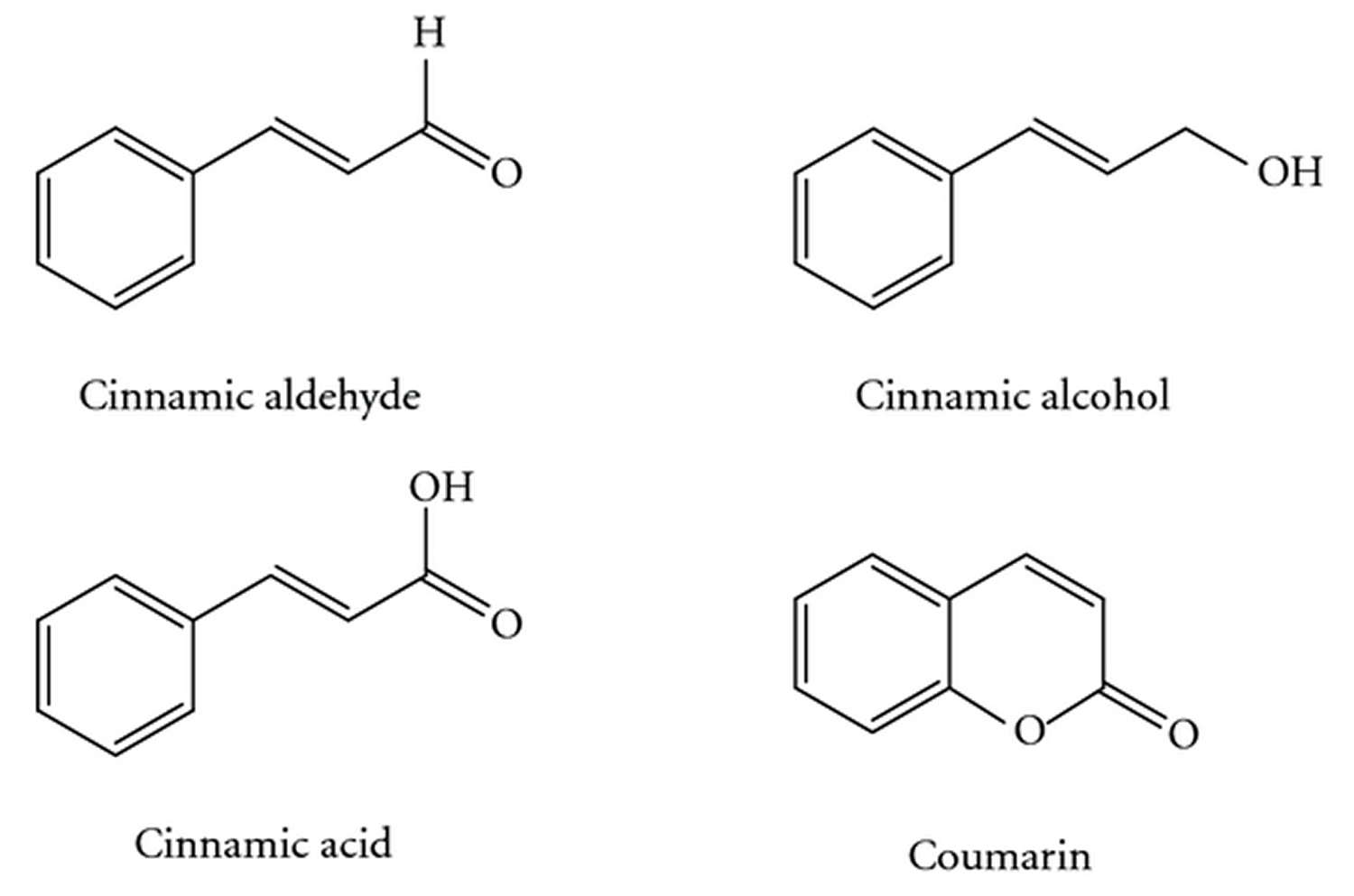 In a 12-week rat feeding study on a mixture of cinnamyl compounds there was slight retardation of growth of males and lowering of food utilization in both sexes at 90 mg/kg body-weight/day. In another study lasting for 16 weeks groups of 10 male and 10 female rats were fed diets containing 0, 0.1, 0.25 and 1.0 per cent. of aldehyde. At the highest level there was slight swelling of hepatic cells and some hyperkeratosis of the epithelium of the forestomach 40.

A 7 1/2 yr old boy ingested 2 oz.(about 60 mL) of cinnamon oil and immediately felt a burning sensation in his mouth, chest, and stomach lasting for about 15 minutes 41. He then developed double vision, dizziness, vomiting, and collapse. Following ipecac and activated charcoal he developed diarrhea, more vomiting, dizziness, abdominal cramps, and burning in the rectal area. The white blood count was 29,800/cu mm. Gastrointestinal symptoms and sleepiness persisted for 5 hours 41.

Three cases of acute contact sensitivity to a new toothpaster (Close-Up). In all cases there was positive reaction to 0.5% cinnamon oil in petrolatum 42.

The European Food Safety Authority (EFSA) Panel on Additives and Products or Substances used in Animal Feed (FEEDAP) concludes that: cinnamaldehyde is safe at the maximum use level of 125 mg/kg complete feed for salmonids, veal calves and dogs, and at 25 mg/kg for the remaining target species 43.