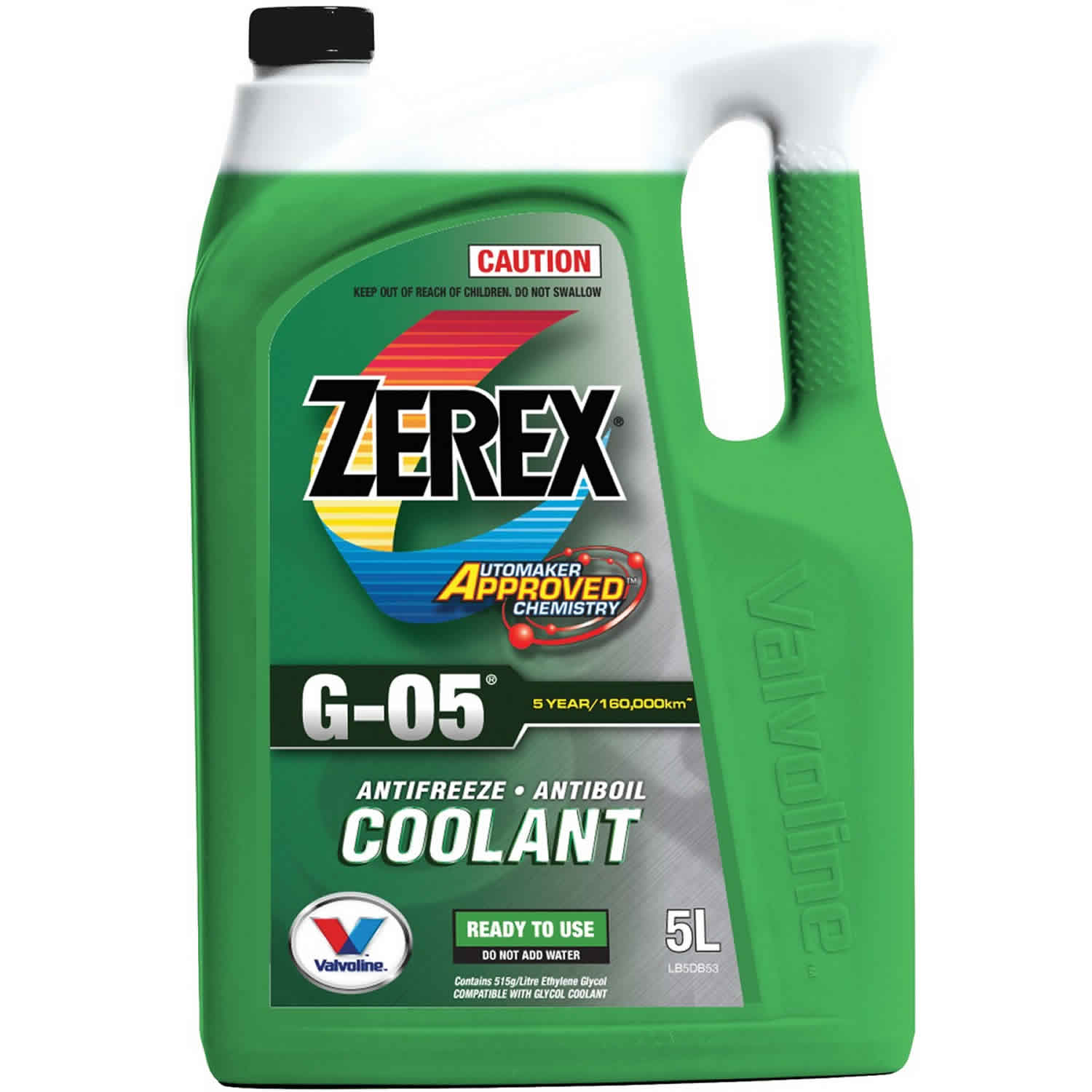 Ethylene glycol (C2H6O2) also known as antifreeze, is a useful industrial compound found in many consumer products, including automotive antifreeze, hydraulic brake fluids, some stamp pad inks, ballpoint pens, solvents, paints, plastics, films, and cosmetics; it also is used as a pharmaceutical vehicle 1. Ethylene glycol is the major ingredient of almost all radiator fluid products in the United States. Ethylene glycol is used to increase the boiling point and decrease the freezing point of radiator fluid, which circulates through the automotive radiator. These changes to the boiling and freezing points result from the colligative properties of the solute (ie, they depend on the number of particles in the solution). Hence, ethylene glycol is added to prevent the radiator from overheating or freezing, depending on the season. Fluorescein dye is often added to radiator fluid to help mechanics identify the source of a radiator leak. The fluorescein in the fluid fluoresces when viewed under ultraviolet light.

Ethylene glycol is a odorless, colorless, sweet-tasting liquid which is why some animals are attracted to it and is often accidentally or intentionally ingested; odor does not provide any warning of inhalation exposure to hazardous concentrations. Many veterinarians are familiar with ethylene glycol toxicity because of the frequent cases in dogs and cats that have licked up radiator fluid. Antifreeze (ethylene glycol) is chemically broken down in your body into toxic compounds. Antifreeze (ethylene glycol) and its toxic byproducts first affect the central nervous system (CNS), then the heart, and finally the kidneys. Ingestion of sufficient amounts can be fatal. As little as 120 milliliters (approximately 4 fluid ounces) of ethylene glycol may be enough to kill an average-sized man.

Initially, patients may be asymptomatic, but ethylene glycol is rapidly absorbed (within 1 to 4 hours), and altered mental status and tachypnea then begin to appear as the ethylene glycol is successively metabolized to very toxic compounds. The progression of toxic effects can be roughly divided into the following three stages, although overlap is possible 2:

The first symptom of ethylene glycol ingestion is similar to the feeling caused by drinking alcohol (ethanol). Within a few hours, more toxic effects become apparent. Symptoms may include nausea, vomiting, convulsions, stupor (decreased level of alertness), or even coma.

Ethylene glycol toxicity should be suspected in anyone who is severely ill after drinking an unknown substance, especially if they at first appear drunk and you can’t smell alcohol on their breath.

An overdose of ethylene glycol can damage the brain, lungs, liver, and kidneys. The poisoning causes disturbances in the body’s chemistry, including metabolic acidosis (increased acids in the bloodstream and tissues). The disturbances may be severe enough to cause profound shock, organ failure, and death.

Initial treatment includes infusion of crystalloids to enhance renal clearance of the toxic metabolites. Ethyl alcohol has traditionally been used for antidotal treatment, but it has largely been supplanted by fomepizole in the United States.

Severity of ethylene glycol poisoning will vary with time from exposure to presentation, if coingestion of ethanol has occurred, or if early treatment was accessible.

Ethylene glycol poisoning usually presents with a varying degree of drunkenness early in the course, with the potential for central nervous system (CNS) depression. During this time, there is often an elevated osmolar gap without an elevated anion gap or acidosis. As the concentration of ethylene glycol shifts toward production of metabolites, the osmolar gap decreases and the anion gap increases with the development of a metabolic acidosis.

Ingestion of ethanol at any point will halt the metabolism of ethylene glycol. As ethylene glycol is progressively metabolized over the course of 4-12 hours, an anion gap metabolic acidosis develops secondary to the accumulaiton of glycolic acid. During this time, the patient may feel generally ill or be CNS depressed, and may begin to compensate with hyperventilation or hyperpnea. Tachycardia and hypertension may also occur. After about 12 hours, there may be evidence of nephrotoxicity, demonstrated by elevated creatinine, due to the precipitation of calcium oxalate crystals in the proximal tubules. This caclium oxalate deposition may predisopose to hypocalcemia, placing patient at risk for tetany, seizures, QT interval prolongation and dysrhythmias. After about 12-18 hours, oliguira may develop. If treatment occurs during this time, the acute renal injury is normally reversible and dialysis is often unnecessary. However, if treatment is delayed further, usually by delayed presentation or recognition, acute renal failure and systemic illness may develop, including acute respiratory distress syndrome, cerebral edema or infarction, and heart failure. Multisystem organ dysfunction is believed to be associated with calcioum oxalate deposition. If treatment does not occur early enough, the course of illness can lead to coma and death 3.

Adverse health effects of ethylene glycol can be delayed significantly by the co-ingestion of alcohol.

Ethylene glycol poisoning resembles ethanol (drinking alcohol) intoxication but without the characteristic odor of alcohol on the patient/victim’s breath. Initial adverse health effects caused by ethylene glycol poisoning include central nervous system depression, intoxication, euphoria, stupor, and respiratory depression. Nausea and vomiting may occur as a result of gastrointestinal irritation. Severe toxicity may result in coma, loss of reflexes, seizures (uncommon), and irritation of the tissues lining the brain.

Treatment options for ethylene glycol poisoning include supportive care, fomepizole (Antizole, 4-Methylpyrazole or 4MP), ethanol, dialysis and theoretically, thiamine, pyridoxine and magnesium 4. Fomepizole is the antidote for toxic alcohols, and it acts by inhibiting alcohol dehydrogenase to cease toxic alcohol metabolism. Ethanol may also be utilized therapeutically to inhibit alcohol dehydrogenase when fomepizole is unavailable. There are advantages and disadvantages to either treatment. Fomepizole is more easily dosed, does not cause any inebriation, and more strongly inhibits alcohol dehydrogenase, but is fairly expensive. Ethanol is less expensive but is harder to dose accurately, requires close monitoring of the serum ethanol concentration, and causes inebriation that may necessitate intensive care monitoring 5.

Fomepizole and ethanol inhibit alcohol dehydrogenase to stop the conversion of ethyelene glycol (and other alcohols) to its toxic metabolites. When alcohol dehydrogenase is inhibited, clearance of ethyelene glycol is prolonged from a half-life of 4-6 hours to an effective half-life of approximately 17 hours. Fomepizole is given intravenously with a loading dose of 15 mg/kg, followed by maintenance dosing of 10 mg/kg every 12 hours for four doses, or until the ethylene glycol concentration is at least less than 62 mg/dL with a normal acid-base status; however, more conservative recommendations of below 25 mg/dL exist. It is not mandatory to complete four doses. If additional dosing is required beyond four maintenance doses, then dose should be increased to 15 mg/kg every 12 hours due to fomepizole’s autoinduction of its own metabolism. During dialysis, fomepizole should be administered every 4 hours as it is removed during dialysis. For a standard 4-hour dialysis session, fomepizole should be dosed both before and after the session, with resumption of 12-hour dosing thereafter 5.

Ethylene glycol and its metabolites are dialyzable; however, with proper administration of fomepizole, dialysis is generally not indicated in the absence of renal dysfunction. In addition, dialysis can unjustifiably increase risk and cost to the patient. Unlike methanol or diethylene glycol, fomepizole alone is the recommended treatment for a toxic exposure to ethylene glycol without renal dysfunction, and only minimal acid-base disturbances, as it is far less likley that any toxicity is associated with unmetabolized ethylene glycol. The effective half life of ethylene glycol is only increased to about 17 hours when alcohol dehydrogenase is inhibited; therefore, dialysis does not necessarily decrease length of stay either. Furthermore, its use often requires being in the intensive care unit in many hospitals, thus increasing costs. Hemodialysis should be strongly considered in the presence of renal dysfunction, severe metabolic acidosis and severe electrolyte abnormalities. Normal urinary output needs to be assured to treat with fomepizole alone so that ethylene glycol can be reliably excreted. The presence of severe acidosis indicates the active and likely incomplete metabolism of ethylene glycol, with the concern that circulating glycolic acid may be converted to oxalate, which increases the risk of worsened renal function. Continuous renal replacement, although less effective, therapy may be considered if intermittent hemodialsyis is not feasible, particularly in the setting of hemodynamic instability. The decision to utilize hemodialysis is complicated and should be made in consultation with a medical toxicologist 7.

Additional treatment options may also be considered. Sodium bicarbonate infusion may be helpful, particularly in severe metabolic acidosis, but is not universally considered a standard recommendation. Calcium gluconate may be indicated if complications occur as a result of hypocalcemia, but should otherwise be replaced cautiously and judiciously as exogenous calcium administration may enhance the precipitation of calcium oxylate crystals. Seizures in the presence of hypocalcemia should be treated with benzodiazepines. Theoretically, administration of thiamine and pyridoxine and magnesium may assist in shunting glycolic acid metabolism away from oxalic acid and toward its nontoxic metabolites, α-hydroxy-β-ketoadipic acid and glycine, respectively, utlizing the mechanism discussed in the pathophysiology section.

Patients often recover when prompt ethylene glycol poisoning diagnosis and treatment occur. When patients present late or diagnosis is not recognized in a timely fashion, significant morbidity and mortality can occur 8.

When patients survive ethylene glycol poisoning, there is generally recovery from any associated nephropathy; although, additional nephrology management and dialysis may be required after discharge.