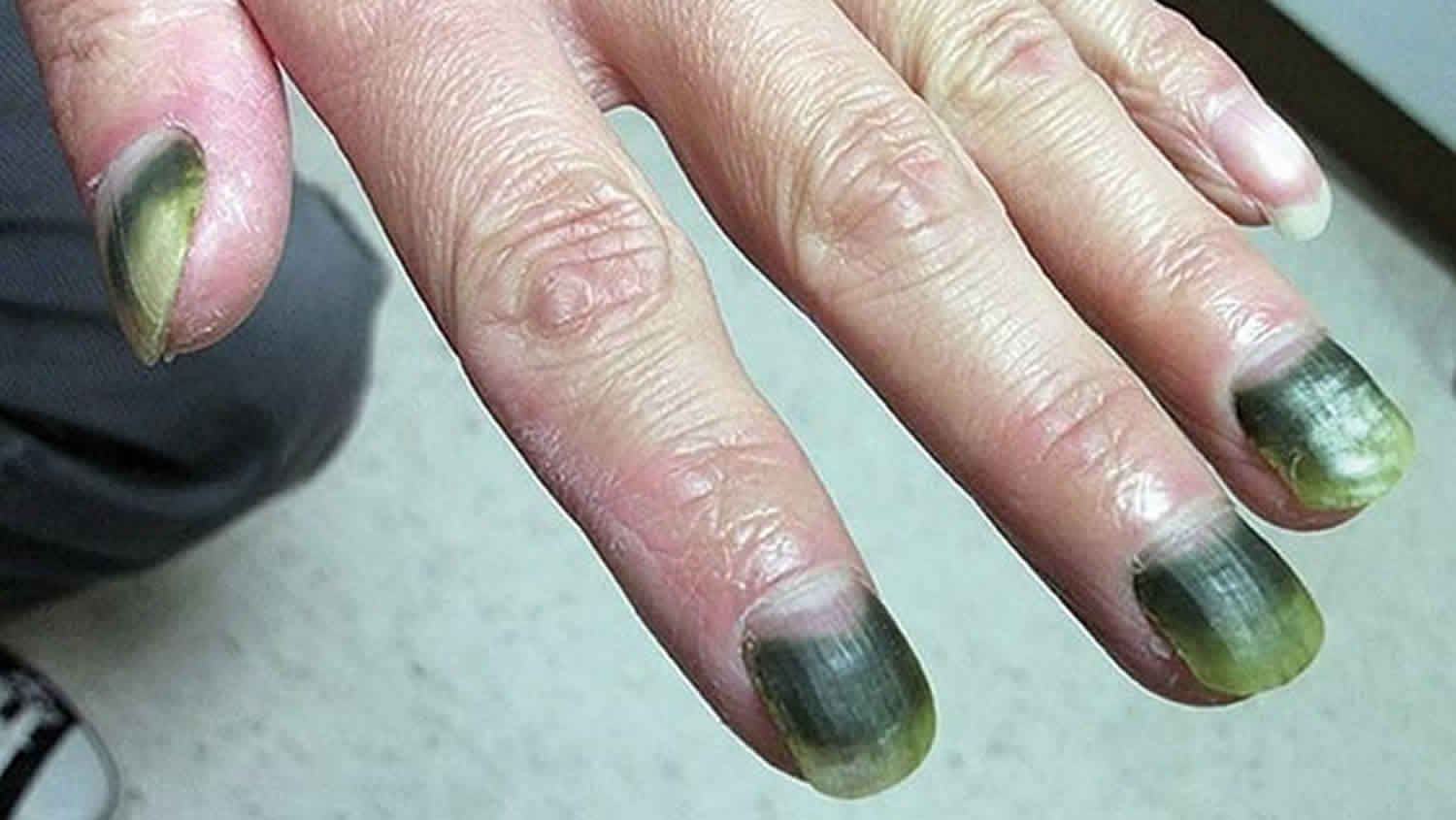 Green nail syndrome also known as chloronychia, is caused by Pseudomonas aeruginosa infection of the nails that leads to a greenish discoloration of nails 1). The green discoloration varies from blue-green to dark green to bluish-grey. Since the discoloration is underneath the nail, it will not disappear with washing or scrubbing. Green nail syndrome is usually confined to one or two nails and can involve fingernails or toenails. The nail is usually not painful; however the skin around the nail, including the cuticle, may be swollen, tender, or red.

Nadifloxacin is a topical fluoroquinolone approved for the treatment of acne vulgaris in some countries (Germany, Italy, Spain, China, Japan and India, among others). It has a broad-spectrum activity against Gram-positive (including methicillin-resistant Staphylococcus aureus), Gram-negative and anaerobic bacteria. Hence in some countries (e.g. India, Japan) it is also approved for the treatment of skin infections.

No. Pseudomonas aeruginosa is a Gram-negative, aerobic, coccobacillus belonging to the Pseudomonadaceae family. These pathogens are widespread in nature, inhabiting soil, water, plants, and animals (including humans).

The pathogenesis of nail infections caused by Pseudomonas aeruginosa is not fully understood. Predisposing factors must be taken into consideration: onycholysis, onychotillomania, microtrauma to the nail-fold, chronic paronychia, chronic exposure to water, soaps, or detergents, and associated nail disorders, such as psoriasis 7).

Green nail syndrome is caused by Pseudomonas aeruginosa infection (Gram-negative bacteria) of the nails that leads to a greenish discoloration of nails 8). Pseudomonas aeruginosa can be commonly found on the skin, especially in the axillary and anogenital regions. However, healthy people do not normally develop Pseudomonas infection. Pseudomonas is considered to be opportunistic and more frequently causes disease in those who are immunocompromised.

Two major risk factors predispose to green nail syndrome. The first risk factor is when a nail becomes abnormally lifted off the nail bed; this is also known as onycholysis. When the nail is detached from the nail bed, the waterproof seal formed by the skin on the nail is lost. This creates a subungual space that collects dirt and debris and may allow an entry point for Pseudomonas aeruginosa. Trauma to the area under the nail contributes to onycholysis. People at risk for separated nails are gardeners, janitors, and plumbers. The second important risk factor is a damp environment. Dry skin is rarely colonized or infected by Pseudomonas aeruginosa. Nails repeatedly immersed in water are susceptible. Housewives, dishwashers, cooks, and health care personnel may be more likely to have green nail syndrome. It should also be noted that wearing tight-fitting shoes for a prolonged time, especially while exercising, is associated with green nail syndrome. This has been noted in military recruits and soccer players. Minor risk factors for green nail syndrome include nail psoriasis and fungal nail infections.

The clinical appearance of green nail syndrome makes it an easy diagnosis for a dermatologist. However if there is doubt, a nail sample can be taken for culture.

The treatment of green nail syndrome is not always easy and topical treatment is usually ineffective and recommendations based on clinical trials are lacking. Therapy consists of cutting the detached portion of the nail, keeping nails dry, and avoiding trauma to the area. Reported treatment options are systemic fluoroquinolones, topical octenidine dihydrochloride 0.1% solution 9), brushing of the nail bed with a 2% sodium hypochlorite solution twice daily 10), topical chlorhexidine solution 11), topical aminoglycoside 12), topical application of diluted acetic acid (vinegar) 13), bacitracin or polymyxin B applied two to four times per day will cure most patients if continued for one to four months 14). Alternatively, chlorine bleach, diluted 1:4 with water, is effective in suppressing growth of Pseudomonas aeruginosa when applied topically to affected nails. Occasionally, the nail may need to be removed, if more conservative treatment fails 15).

Moreover, three patients with HIV acquired immune deficiency syndrome with green nail syndrome were successfully treated with topical nadifloxacin have been reported 16). However, clinical trials of patients with green nail syndrome are currently lacking 17). Nadifloxacin is a topical fluoroquinolone approved for the treatment of acne vulgaris in some countries (Germany, Italy, Spain, China, Japan and India, among others). It has a broad-spectrum activity against Gram-positive (including methicillin-resistant Staphylococcus aureus), Gram-negative and anaerobic bacteria. Hence in some countries (e.g. India, Japan) it is also approved for the treatment of skin infections. When topical therapies are not preferred by the patient, oral ciprofloxacin should be recommended for 2–3 weeks 18).