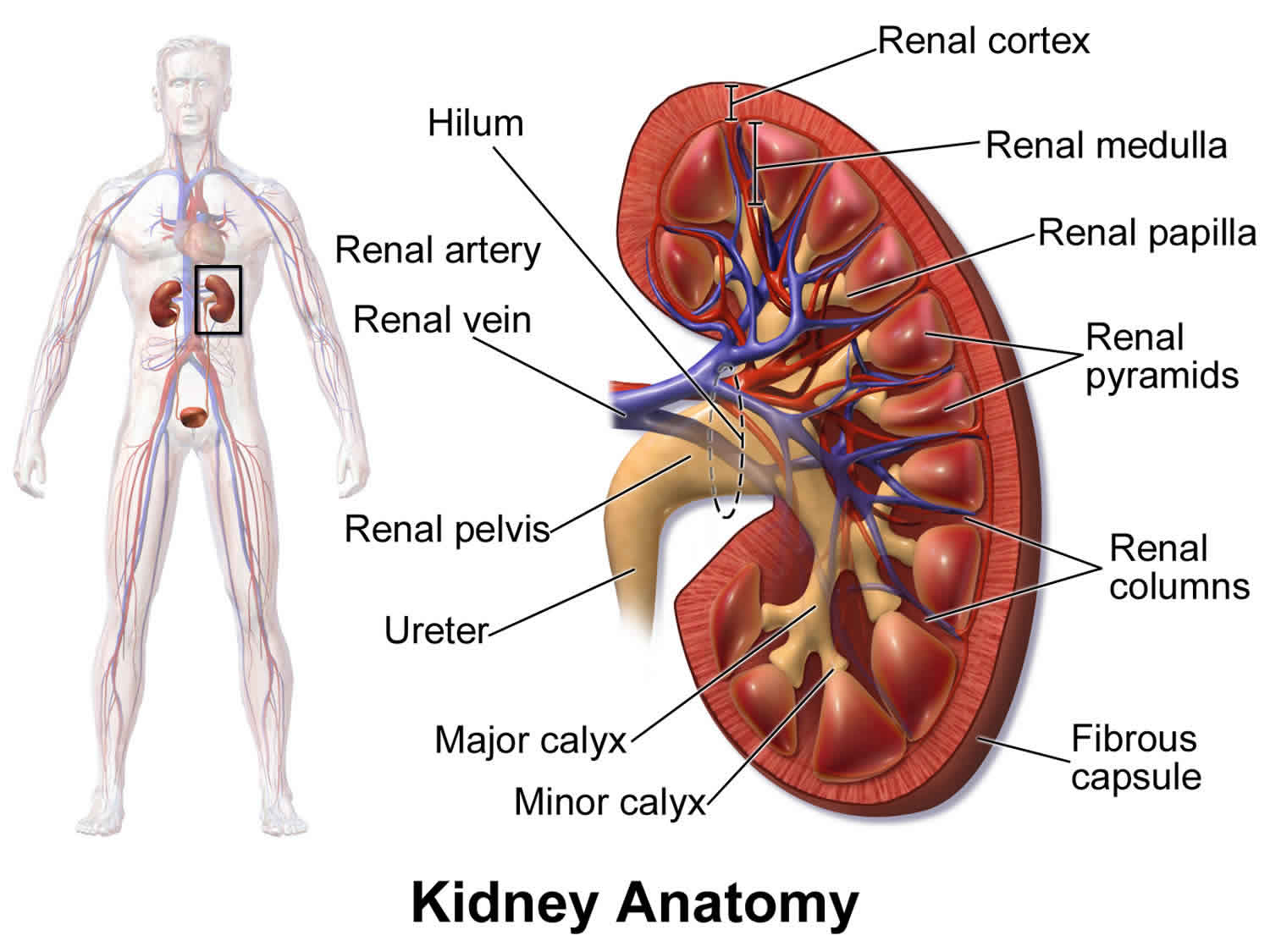 What is interstitial nephritis

Interstitial nephritis is a kidney disorder in which the spaces between the kidney tubules become swollen (inflamed). This reduces the kidneys’ ability to filter properly. Your kidneys filter waste and extra fluid from your body.

Interstitial nephritis is a serious condition, but it can be treated. In rare cases, it may cause kidney failure. When the kidneys fail, waste and extra fluid build up in the body. This can cause problems with the heart, brain, lungs, and other organs.

The acute form of interstitial nephritis is most often caused by side effects of certain drugs.

The principle pathogenesis in drug-induced acute interstitial nephritis is hypersensitivity reaction to drugs, such as penicillin, nonsteroidal anti-inflammatory drugs (NSAIDs), and sulfa-containing drugs.

Acute interstitial nephritis has no racial predilections. Generally, sex does not have any influence on having the disease, except for analgesic nephropathy, which is 5-6 times more common in women. This is attributed to women taking more analgesics than men. The role of women’s physiology in pathogenesis of analgesic nephropathy is unknown.

Acute interstitial nephritis affects all ages, however, it must be remembered that renal toxicity is dependent on the cumulative effects of toxic substances. This means that the more the kidney is damaged due to toxic substances, the higher the risk of the kidney suffering from subsequent damage. Also, advanced age is a risk factor for acute interstitial nephritis because kidney function generally declines with age.

Acute interstitial nephritis usually presents with non-specific symptoms, such as:

However, it must be remembered that acute interstitial nephritis can be symptomless. It is important to establish if any new drugs have been started, particularly pain-killers and antibiotics. Also, the use of complementary or alternative medicines needs to be established. The patient should also be asked if they have had any recent infections, including viral illnesses.

Clinical examination might not reveal any relevant findings as kidney disease does not usually present with any specific signs. However, patients with drug-induced acute interstitial nephritis might have signs of an allergic-type reaction. This includes:

A routine set of general blood investigations will include:

Urinalysis will be done to examine the urine. Positive urinalysis findings include:

However, it must be remembered that occasionally the patient’s urinalysis may come back normal – described as ‘bland urinalysis’. A relatively normal urinalysis does not exclude the diagnosis of acute interstitial nephritis.

In order to diagnose the disease, some or all of the following tests may be done:

Another imaging study that can be done, albeit infrequently, is a gallium scan, which is a nuclear medicine imaging technique.

The most important part of treatment is cessation of the offending agent. This includes a complete review of the patient’s current medications and stopping any drugs that may potentially be causing acute interstitial nephritis. If the patient does not show any symptoms and signs of improvement (in terms of clinical symptoms as well as blood results), corticosteroids can be administered to suppress inflammation. Evidence suggests that immunosuppressants (e.g., cyclophosphamide or mycophenolate mofetil) may be beneficial in acute interstitial nephritis that doesn’t respond to the cessation of the offending agent.

The overall prognosis for acute interstitial nephritis is excellent. Most patients’ renal function recovers upon cessation of the offending agent. The improvement occurs within 6-8 weeks. However, recovery may be incomplete leading to persistent elevation in plasma creatinine concentration.

Allergic interstitial nephritis is most often caused by drug therapy (70% to 75% of cases), with antibiotics such as penicillins, cephalosporins, rifampin, sulfonamides, and ciprofloxacin accounting for about 30% to 49% of drug-induced cases. The most common class of medications causing allergic interstitial nephritis are nonsteroidal anti-inflammatory drugs (NSAIDs). Other commonly implicated drugs include indinavir, proton pump inhibitors (particularly lansoprazole and omeprazole), allopurinol, 5-aminosalicylates, diuretics, and cimetidine. Numerous case reports in the literature regarding other medication culprits demonstrate the need for ongoing consideration of allergic interstitial nephritis as a potential cause of worsening renal function after initiation of drug therapy. Polypharmacy, particularly in the elderly population, has made the identification of the causative agent challenging in many cases 8.

Patients with allergic interstitial nephritis may present with the classic triad of rash, fever, and eosinophilia (in 10% of cases), but often present with mild worsening of renal function, prompting further investigation. Initial workup of the suspected condition should include a thorough history and physical examination with particular attention to over-the-counter medications such as NSAIDs and any recently introduced medications. The physical exam is only positive for rash, fever, and eosinophilia in 15%, 27%, and 23% of cases, respectively.

Allergic interstitial nephritis may occur as quickly as three days to several months after exposure to a drug. An earlier presentation is typically associated with the repeated exposure to offending drugs 9.

A thorough laboratory workup with a complete blood count with differential, comprehensive metabolic profile, urine eosinophils, and urinalysis with microscopy is indicated. If clinically warranted, a renal biopsy may be considered to make a definitive diagnosis. There is no imaging test to evaluate for allergic interstitial nephritis.

In patients with suspected or confirmed allergic interstitial nephritis, the mainstay of treatment is discontinuation of the offending agent. Immunosuppressive therapy has been used to treat allergic interstitial nephritis, but the paucity of randomized controlled trials has limited the evidence for this approach. Several small, uncontrolled studies have suggested improvement with the use of steroids, with the most improvement noted in patients receiving steroids within seven days of drug withdrawal. A wide variety of treatment regimens have been employed, with steroid therapy administered for one to 12 weeks. There is currently no preferred standard treatment regimen, although experts agree that a short course of steroids (less than 12 weeks) is likely sufficient. Steroids are generally considered if there has been no improvement in renal function within three to seven days after withdrawal of the offending drug.

There have been small case series evaluating mycophenolate mofetil and cyclosporine as options for therapy in glucocorticoid-dependent and resistant patients. Further study will need to be performed before this approach can be recommended 10.

Allergic interstitial nephritis due to proton-pump inhibitors has been noted to have less severe acute kidney injury but with less likelihood to recover by six months, which has been attributed to the likelihood of prolonged drug exposure.

The following can cause interstitial nephritis:

Interstitial nephritis may occur 2 or more weeks after you start a medicine. Talk to your doctor if you have any questions about a medicine you are taking.

Often, interstitial nephritis can’t be prevented. Avoiding or reducing your use of medicines that can cause this condition can help reduce your risk. If needed, your provider will tell you which medicines to stop or reduce.

The most common symptom of interstitial nephritis is a decrease in the amount of urine you produce. Other symptoms can include:

Metabolic acidosis can occur because the kidneys aren’t able to remove enough acid. The disorder can lead to acute or chronic kidney failure or end-stage kidney disease.

If you have one or more symptom, your doctor may test your urine (called a urinalysis) and your blood. He or she could also order imaging tests of your kidneys, such as an ultrasound. If something is found, they may order a biopsy.

Limiting salt and fluid in the diet can improve swelling and high blood pressure. Limiting protein in the diet can help control the buildup of waste products in the blood (azotemia), which can lead to symptoms of acute kidney failure.

In most cases, interstitial nephritis is a short-term problem. Treatment of the underlying problem cures the condition. Rarely it can lead to long-term or permanent kidney damage, such as chronic kidney failure. This is more likely to happen in older adults.

Most often, interstitial nephritis is a short-term disorder. In rare cases, it can cause permanent damage, including long-term (chronic) kidney failure.

Acute interstitial nephritis may be more severe and more likely to lead to long-term or permanent kidney damage in older people.