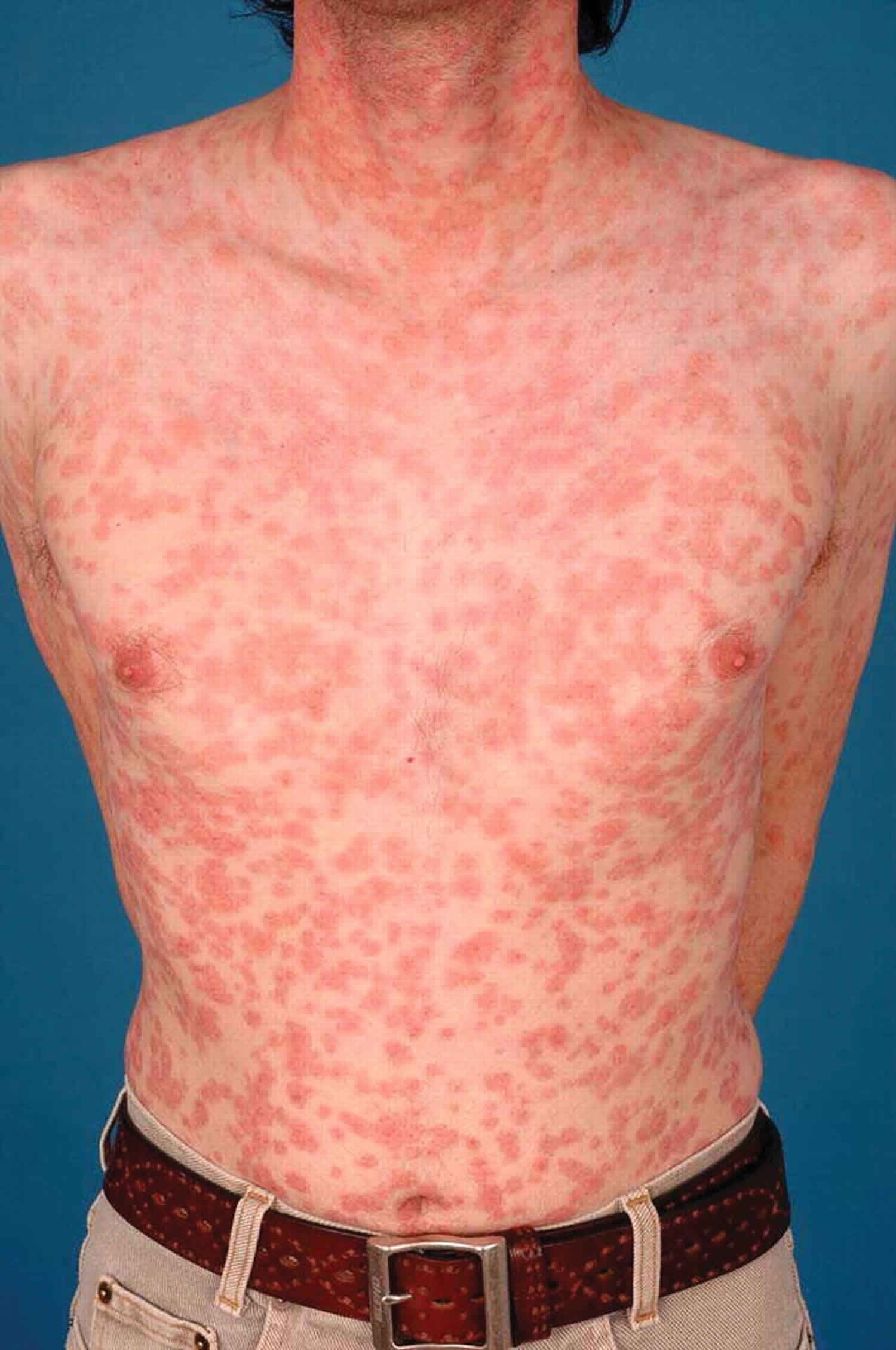 The Jarisch–Herxheimer reaction was named after European dermatologists who described in 1895 and 1902 patients with syphilis who developed exacerbations of their skin lesions after treatment with mercurial compounds 6). After penicillin became the drug of choice for syphilis in the 1940s, the Jarisch–Herxheimer reaction occurred during the first 24 hours of treatment in primary and secondary disease as well in general paresis of the insane manifesting as fever, chills, headache, myalgias, and intensification of skin rashes.

In other spirochetal infections, including Lyme disease, leptospirosis, and relapsing fever, a similar Jarisch–Herxheimer reaction was reported after treatments with penicillins, tetracyclines, and erythromycin. In addition, newer antimicrobials such as cephalosporins, meropenem, ciprofloxacin, levofloxacin, clarithromycin, and azithromycin can also provoke the Jarisch–Herxheimer reaction 7).

Jarisch–Herxheimer reaction can be regarded as an adverse effect of antibiotics, necessary for achieving a cure of spirochetal infections. Experimental evidence indicates Jarisch–Herxheimer reaction is caused by nonendotoxin pyrogen and spirochetal lipoproteins 8). Mediation of the Jarisch–Herxheimer reaction in relapsing fever by the pro-inflammatory cytokines tumor necrosis factor (TNF), interleukin (IL)-6, and IL-8 has been proposed, consistent with measurements in patients’ blood and inhibition by anti-TNF antibodies 9). Accelerated phagocytosis of spirochetes by polymorphonuclear leukocytes before rise in cytokines is responsible for removal of organisms from the blood, suggesting an early inflammatory signal from polymorphonuclear leukocytes.

Clinical observations of patients with the Jarisch–Herxheimer reaction suggested a role for endotoxin 10), but experimental studies showed that spirochetes do not have biologically active endotoxin as defined by the limulus test 11). Substances other than endotoxin as well as mechanisms were described 12). In Treponema pallidum, lipoproteins were identified as likely responsible for inflammatory signs because they stimulate macrophages to produce tumor necrosis factor (TNF) 13). In Borrelia Burgdorferi, the outer surface protein A lipoprotein stimulates cells in culture to produce transcription factors for cytokines 14). Borrelia recurrentis from human plasma was also negative for endotoxin by the limulus test but was pyrogenic in rabbits 15). The nonendotoxin pyrogen could be the same as the lipoprotein. Lipoprotein of the outer membrane proteins of leptospires caused inflammation in mouse kidney cells 16).

In vitro studies of phagocytosis by monocytes showed that live, whole B. burgdorferi spirochetes stimulated ingesting monocytes to produce cytokines better than heat-killed or lysates of organisms 21). Apoptosis or programmed cell death of monocytes after phagocytosis of Borrelia could also be a factor driving the Jarisch–Herxheimer reaction 22). After phagocytosis, B. burgdorferi uses TLR2 signaling to give a pro-inflammatory cytokine response via the adapter molecule MyD88 23).

Biopsy of the petechiae was performed in patients with relapsing fever and resulted in thrombocytopenia due to disseminated intravascular coagulation (DIC) but not vasculitis or endothelial damage 24). Conjunctival hemorrhages in a patient in Spain was also associated with thrombocytopenia 25).

In a prospective study of 33 pregnant women in Texas with syphilis, who were treated with benzathine penicillin, 15 (45%) developed a Jarisch–Herxheimer reaction that was more common in primary and secondary infections than in latent infections; it started 2–8 hours after therapy, peaked at 6–12 hours, and resulted in fever and uterine contractions in most women, resulting in delivery of three infants with congenital syphilis 30). In 13 pregnant women in Chicago with syphilis who developed a Jarisch–Herxheimer reaction, uterine contractions were noted that resolved within 24 hours 31). A woman in Texas with preterm labor given penicillin for prophylaxis of Streptococcus agalactiae vaginal carriage developed chills and tachycardia, only to be found seropositive for syphilis with papulosquamous skin lesions after delivery of her baby with congenital infection 32). A woman in Japan presented in labor, received ampicillin prophylaxis for Streptococcus agalactiae and delivered 6 hours later a baby with a diffuse skin rash including blisters that suggested a Jarisch–Herxheimer reaction along with signs of congenital syphilis; after delivery, the baby received ampicillin, followed an hour later by fever and tachypnea, suggesting another Jarisch–Herxheimer reaction 33).

In trials shown in Table 1, the range of Jarisch–Herxheimer reaction frequency was 7–30%, indicating a trend toward lower frequency than for syphilis. Furthermore, the reactions in lyme disease were clinically milder than in the other diseases, without organ dysfunction or need for hospitalization. A severe case was a 31-year-old woman in Connecticut with a tick bite followed by erythema migrans, who received amoxicillin, which an hour later provoked chills, a temperature of 40°C, and hypotension that resolved over 3 hours while getting 3 L of intravenous saline 81).

Among 137 pregnant women in Tanzania with treated relapsing fever, 80 went into labor with the sad result that 38 infants died (47.5%), mostly because of low birthweight; however, only 1.5% of the women were noted to have a Jarisch–Herxheimer reaction and 1.5% of the women died. In these 80 women, it was unclear whether their premature labor was caused by their relapsing fever infections mainly or by the antibiotic treatment 101). A 19-year-old woman in Tanzania with relapsing fever delivered her baby, after which she was treated with penicillin, only to die the same day during a Jarisch–Herxheimer reaction 102). Neonatal infections, likely acquired from maternal infections during birth or across the placenta before birth, are rare but often fatal. In a report of five cases of neonatal relapsing fever in Tanzania, three died within a few hours after penicillin treatment 103). Heavy spirochetemia was blamed for their deaths, but Jarisch–Herxheimer reaction cannot be excluded in case reports without information about changes in vital signs after treatment.

Admit the patient to the hospital if neurologic involvement is noted. Otherwise, treat with steroids and antipyretics, as indicated 108).

Corticosteroids (eg, prednisone at 20 mg 4 times per day for 3 days started 1 day prior to antitreponemal treatment) have been used to prevent adverse effects. Salicylates/antipyretics are prescribed for symptomatic relief 109).