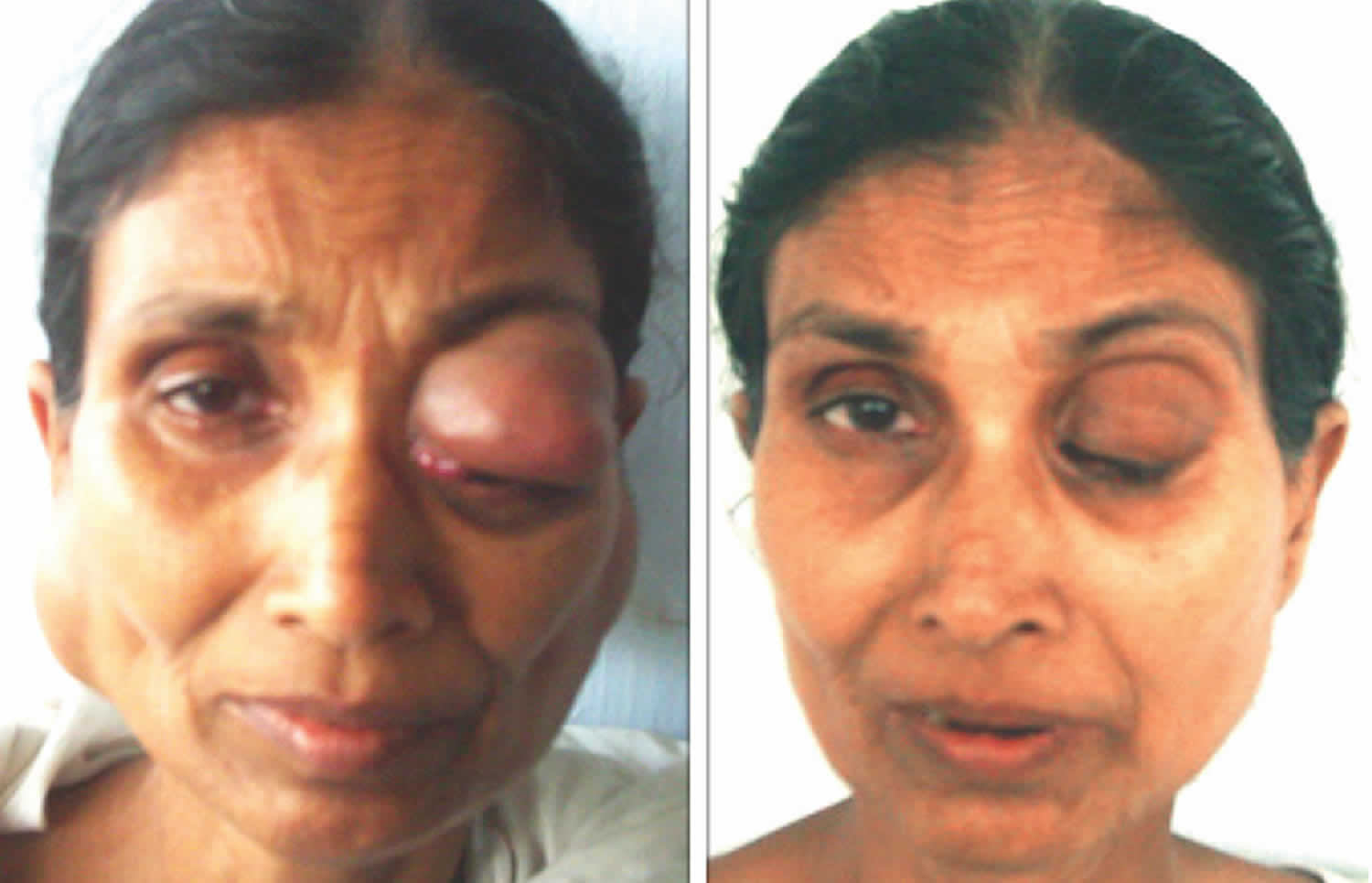 Mikulicz syndrome also known as IgG4-related dacryoadenitis and sialadenitis, dacryosialoadenopathy, Mikulicz’s disease, Mikulicz-Radecki syndrome or Mikulicz-Sjogren syndrome, is an immunoglobulin G4 (IgG4)-related disease characterized by inflammation of the lacrimal glands (which produce tears), parotid glands, and submandibular glands (two of the major salivary glands) 1). In some cases, it also affects other glands or organs 2). Mikulicz syndrome is usually painless, mainly causing mouth and eye dryness, and swelling over the affected glands 3), but can also affect other organs such as the lungs, liver, and kidneys. When other organs are affected, it can be accompanied by complications such as autoimmune pancreatitis, retroperitoneal fibrosis, and tubulointerstitial nephritis 4).

The first descriptions of Mikulicz’ syndrome or IgG4-related dacryoadenitis and sialadenitis were published in the late 19th century. Johann von Mikulicz first presented Mikulicz disease in 1888 at a meeting of the Society for Scientific Medicine in Königsberg 5). He later published a report of this sentinel case detailing a 42 year-old man with an inflammatory disease of the salivary glands with initial symptoms of lacrimal gland swelling followed by submandibular and parotid swelling  6). Mikulicz syndrome is now considered part of the IgG4-related autoimmune disease spectrum, which can include inflammatory disorders of the pancreas, thyroid gland, pachymeninges, pituitary gland and infundibulum 7). Cranial nerve involvement has also been described and there is a postulated association with inflammatory pseudotumor 8).

Mikulicz disease is the second most common autoimmune disease after rheumatoid arthritis (RA), more common in the Northern than the Southern Hemisphere 9). The incidence of Mikulicz disease and Mikulicz syndrome is unknown but thought to be quite rare 10). Patients are primarily women, nine times more likely to be affected than men and Mikulicz disease usually presents in the 4th and 5th decades of life, with symptoms appearing to increase with age 11).

The underlying cause of Mikulicz syndrome or IgG4-related disease is still not known 12).

Mikulicz syndrome treatment involves corticosteroids, which are usually effective 13). Medicines that suppress the immune system (immunosuppressants) may also be used in cases that do not respond to corticosteroids 14).

Footnote: A 61-year-old female patient presented with a swell-ing on the right parotid and submandibular regions along with another swelling in the left upper eyelid of 1.5 years’ duration. Both the swelling gradually increased in size with mild pain, which was referred to the right ear. This was followed by another swelling involving the left parotid and submandibular regions and a painless swelling in the left groin for 1 year. Local examination revealed multiple, firm, mobile, nontender, well-defined swelling over both parotid and submandibular regions, right side of the neck, over both the upper eye-lids, and both sides of the groin. The patient had gradu-ally diminishing vision with dryness and irritation of both eyes and associated dryness of the mouth. An oral examination revealed no other abnormality except dryness in the oral mucosa. The patient also had difficultly in talking and hoarseness of voice. Histopathological examination from left parotid and labial biopsy showed lymphoid infiltration and fibrosis consistent with Mikulicz disease. 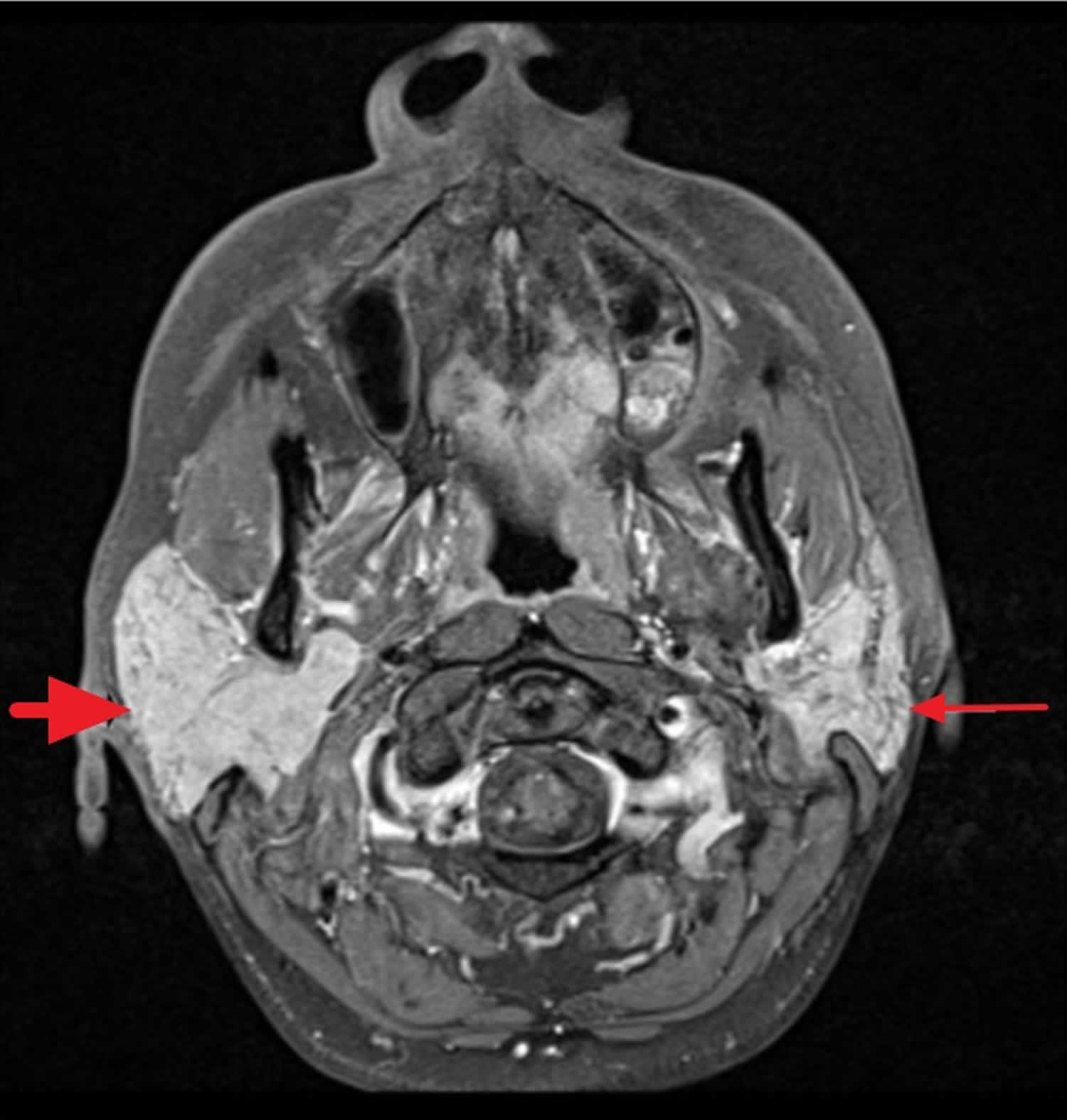 IgG4 is a subclass of immunoglobulin G (IgG), which is the most common form of immunoglobulin. IgG accounts for 75% of antibodies circulating in the blood, which are an essential part of the secondary immune response to infection and toxins. IgG is made by plasma cells, a specific type of B lymphocyte.

There are four subclasses of IgG. Subclass IgG4 is the least common of these, accounting for about 4% of IgG in serum. IgG4 has a unique structure. Its specific biological role is uncertain. However, IgG4 is known to play a role in protection against type 1 hypersensitivity reactions, for example to bee venom, and in the pathogenesis of autoimmune blistering diseases such as pemphigus vulgaris, helminth infections, and malignancy including melanoma.

What is IgG4-related disease?

IgG4-related disease is a newly-described rare syndrome consisting of many disease entities that were previously thought to be unrelated. These conditions have the pathological features of:

The cause of Mikulicz syndrome is unknown. Multiple causes account for Mikulicz syndrome that includes Sjogren syndrome, sarcoidosis, lymphoma, and tuberculosis. According to the criteria of Schaffer and Jacobsen 17), Mikulicz disease is of unknown etiology and follows a benign course, whereas Sjogren syndrome is associated with some other disorders, such as leukemia, lymphosarcoma, tuberculosis, and sarcoidosis.

Little is known about the initiation process of immunoglobulin G4-related disease or how and why these specific organ infiltrations occur. There is some evidence from Asian populations, that certain HLA alleles – particularly DRB1*0405 and DQB*0401 – increase the susceptibility to type 1 autoimmune pancreatitis 18). Further, few single-nucleotide polymorphisms (SNP) in genes related to immune system such as CTLA-4 and Fc- receptor-like 3 have been linked to immunoglobulin G4-related disease 19). In autoimmune pancreatitis, autoantibodies against the plasminogen- binding protein of H. pylori were found in the majority of patients in one study 20). Plasminogen- binding protein of H. pylori shares homology to a protein expressed in pancreatic acinar cells. These authors 21) hypothesized, that through molecular mimicry this immune response could lead to immunoglobulin G4-related disease.

Well-fitting to a TH2 immune response, immunoglobulin G4-related disease is characterized by both systemic and localized IgG4 production. It is currently unclear, whether these antibodies are acting as pathogenic antibodies or are just a bystander phenomenon. In healthy individuals, IgG4 is the least abundant IgG subclass molecule accounting for less than 5% of total IgG 29). In addition, IgG4 itself seems to be unable to activate the classic complement pathway. Another characteristic feature of IgG4 antibodies is the possible occurrence of Fab arm exchange of these antibodies 30). This is due to weak bonds between the heavy chain of the IgG4 antibodies thus allowing the Fab arm exchange and formation asymmetric bispecific antibodies. This further hampers antigen cross-linking and immune complex formation of IgG4 antibodies. Nonetheless, there is evidence of importance and pathogenicity of IgG4 antibodies in human diseases. Certain autoantibody immune mediated diseases such as membranous glomerulonephropathy and thrombotic thrombocytopenic purpura seem to be mediated by antibodies of the IgG4 type 31).

Interestingly, low C3 and C4 complement levels can be observed in one third of immunoglobulin G4-related disease patients with renal involvement indicating immune complex formation 32). In type 1 autoimmune pancreatitis, tissue deposition of C3c, IgG4 and IgG can be observed at the basement membrane of pancreatic and bile ducts and of acini 33). C3 and IgG deposition can also be observed at the tubular basement membrane in IgG4- related tubulointerstitial nephritis 34). Thus, immune complex mediated tissue damage may occur at least in some organ manifestations of immunoglobulin G4-related disease.

Classic symptoms of Mikulicz’s syndrome are dry mouth (xerostomia) and parotid enlargement 37). Dry eyes and lacrimal gland enlargement are also commonly reported symptoms. Parotid and lacrimal gland enlargement has been reported with both bilateral and unilateral distribution, in concurrence, or in isolation 38). Mikulicz syndrome is usually painless, mainly causing mouth and eye dryness, and swelling over the affected glands 39), but can also affect other organs such as the lungs, liver, and kidneys. When other organs are affected, it can be accompanied by complications such as autoimmune pancreatitis, retroperitoneal fibrosis, and tubulointerstitial nephritis 40). Dry mouth (xerostomia) leads to sore mouth, inability to speak, hoarseness, and dif-ficulty in swallowing and chewing. Decreased mucin production predisposes to loss of taste, bacterial and yeast infection with increased risk of caries 41) and oral candidiasis in upto 80% 42).

The diagnosis of immunoglobulin G4-related disease can be difficult, as multiple organs may be involved simultaneously. Diagnostic criteria have not been fully developed. Investigation in suspected IgG4-related disease requires a combination of clinical, endoscopic, radiological and serological tests looking for organ involvement and end-organ damage (eg, hormonal abnormalities). Tissue diagnosis requires a biopsy of affected organ tissues.

While the location of Mikulicz’s disease manifestation may vary, the histological pattern is – with some exceptions – more or less uniform and shares particular features: 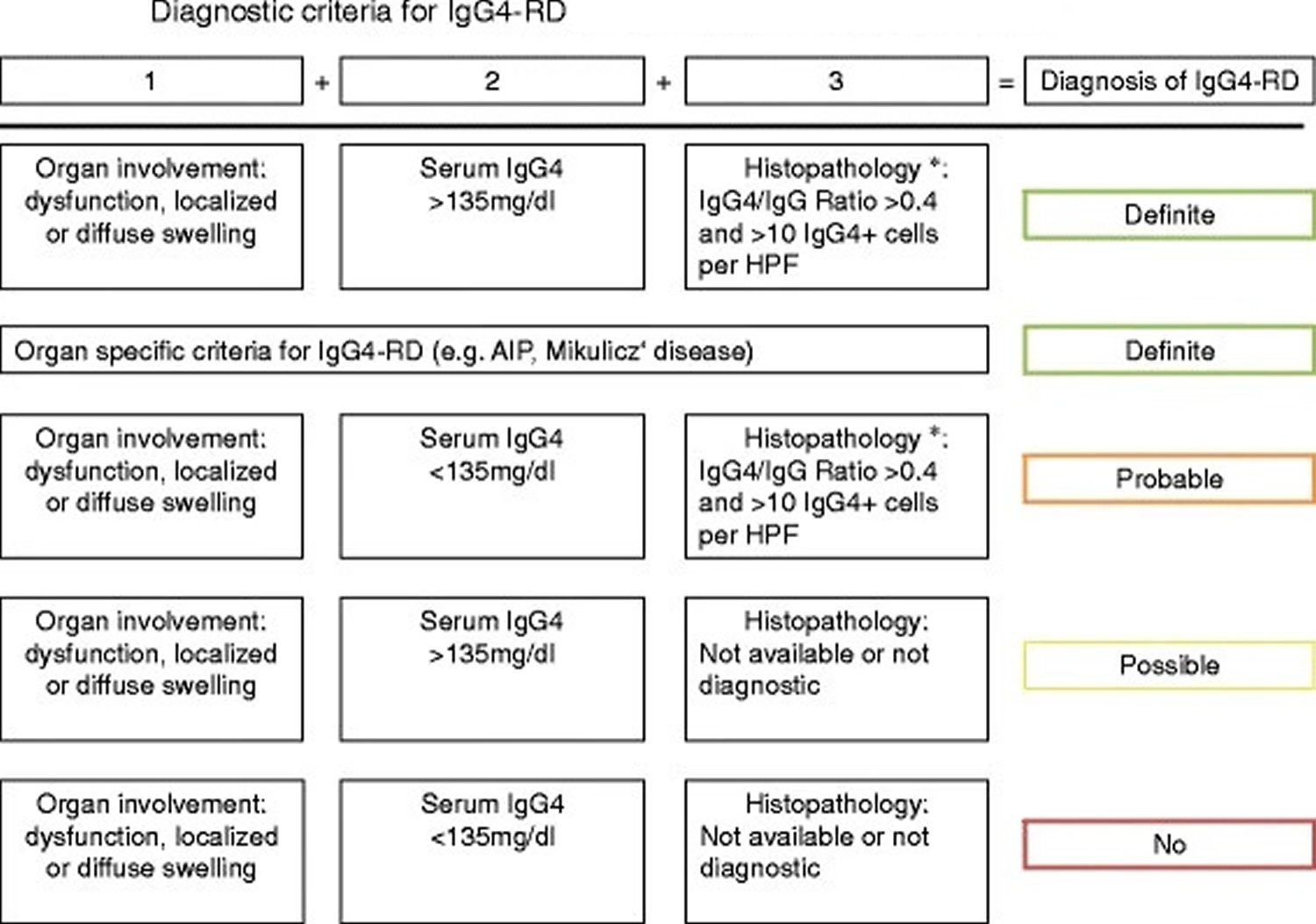 Mikulicz syndrome is treated with corticosteroid therapy in the acute phase, often prednisone 40 mg per day for 2–4 weeks followed by a gradual tapering of the dose. In patients that cannot be taken off prednisone, a steroid-sparing agent like azathioprine or mycophenolate may be used. Rituximab, a B cell-depleting monoclonal antibody, has been used with some success.

Surgical excision of the affected gland has also been performed.

Organ-specific replacement therapy may be required:

Sarcoidosis treatment depends on patient symptoms. Most patients (>75%) require only symptomatic therapy with nonsteroidal anti-inflammatory drugs (NSAIDs). Approximately 10% need treatment for extrapulmonary disease and 15% are treated for persistent pulmonary disease. Oral prednisone given daily is the mainstay of treatment for people with chronic disease 54).

The long-term prognosis of Mikulicz syndrome is unknown. It is not known if IgG4-related disease leads to an increased risk of other forms of cancer.

Major causes for morbidity and mortality are significant organ involvement such as:

Among Sjogren syndrome patients, the incidence of non-Hodgkin’s lymphoma is 43.8 fold higher than in the general population, although these statistics may be in question given the recently elucidated distinction between Mikulicz syndrome and Sjogren syndrome 55).