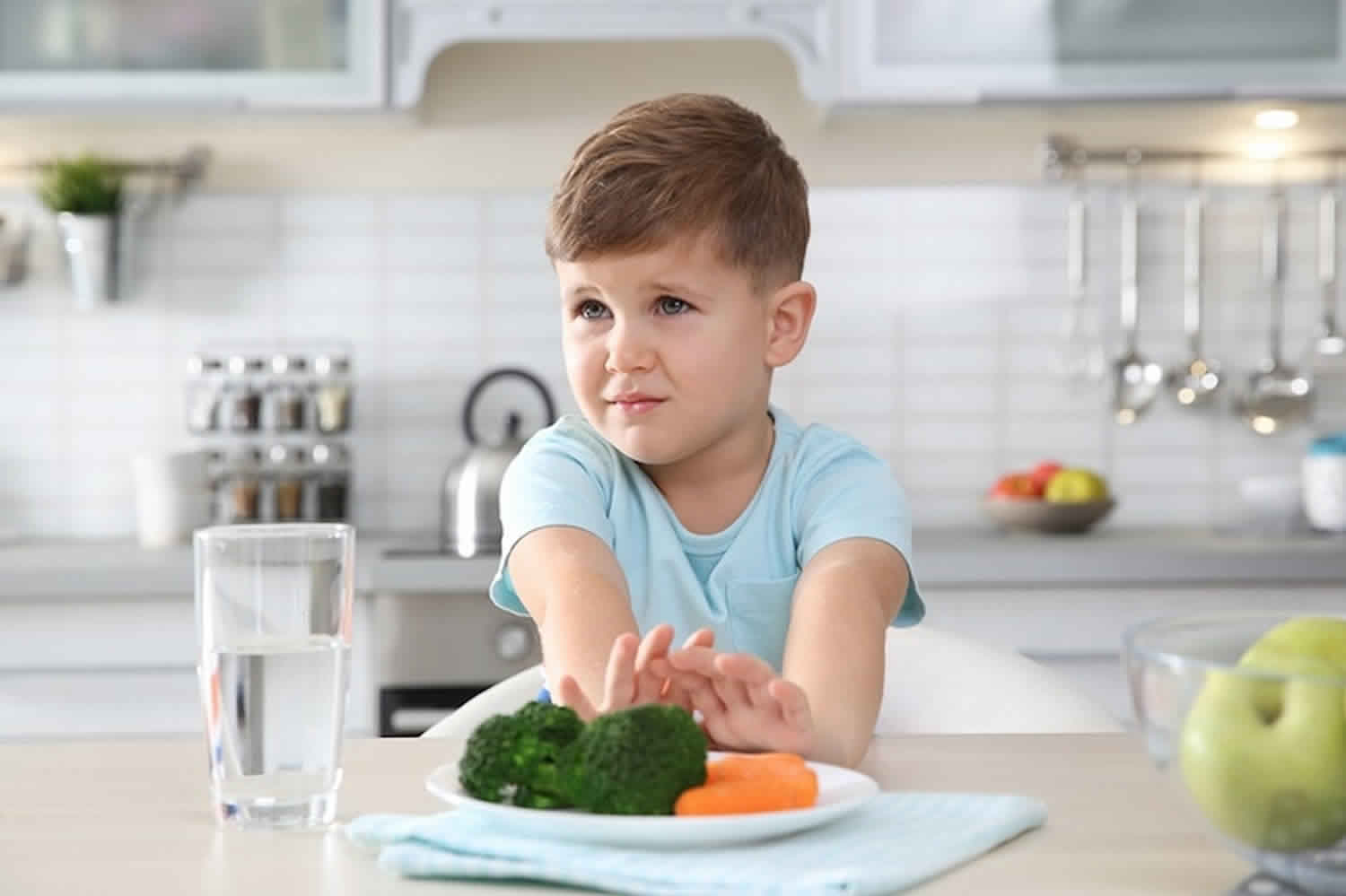 Neophobia also called cainotophobia or cainophobia, is the fear of anything new, especially a persistent and abnormal fear. In its milder form, neophobia can manifest as the unwillingness to try new things or break from routine. Mild manifestations are often present in young children (who want the small portion of the world that they “know” to remain constant) and elderly people (who often cope using long established habits and don’t want to learn “new tricks”). But neophobia could also be fear of losing what one has e.g., the fear that if anything changes, one might never be happy again. In the context of children the term is generally used to indicate a tendency to reject unknown or novel foods 1). Food neophobia, as it may be referred to, is an important concern in pediatric psychology 2).

In biomedical research, neophobia is often associated with the study of taste.

Food neophobia refers to the reluctance to eat or the avoidance of new foods, is a term which has gained popularity recently as a tool for understanding difficulty with feeding and eating 3). In contrast, ‘picky/fussy’ eaters are usually defined as children who consume an inadequate variety of foods through rejection of a substantial amount of foods that are familiar (as well as unfamiliar) to them 4). Food neophobia is distinguished from picky eating because the fear for someone with food neophobia lies in the items being new or unfamiliar. Someone who is a fussy eater often avoids common foods they are very familiar with 5). Many people have narrow food preferences and would rather eat food they know than try something they do not. Food neophobia describes a condition when preferences are overwhelming, phobic and likely to have a social impact (avoiding meals and situations with unfamiliar food) and a dietary impact. Individuals with high food neophobia levels may be indicated as a specific group of consumers 6), which can be mainly attributed to their sensory aversions, as well as to the fear of negative consequences that can occur following the consumption of specific food products 7). The latter reason may be especially important for patients diagnosed with diet-related diseases, particularly for those who develop food allergies, intolerances, and other adverse reactions to food products, including celiac disease 8).

Food neophobia is minimal at infancy and peaks sometime between two and six years 9). A lower level at infancy is adaptive to facilitate the introduction of new foods 10). The peak in food neophobia occurs when children start to explore their surroundings outside parental guidance, thereby functioning as a protective mechanism when risk of consumption of toxic or poisonous food is high 11). Food neophobia may be primary (e.g., never learned to eat a range of food), or it may occur in response to an adverse event (e.g., choking, vomiting, diarrhea). Neophobia is not a permanent dislike for new foods; acceptance can be promoted through repeated exposure to or modelling the consumption of the rejected food(s) 12). Neophobia overlaps to some extent with the broader concept of ‘picky/fussy’ eating which refers to the rejection of both familiar and unfamiliar foods and may not be as easy to overcome through repeated exposure 13). It is worth noting that measurement of both neophobia and picky/fussy eating by parents reflects parental perceptions of the child’s behavior 14). In particular, the rejection of foods a child normally eats (‘fussy eating’) may in fact reflect lack of appetite (i.e., fullness) rather than fussy eating behavior.

In Australia, many children do not meet the recommendations for fruit and vegetable intakes; 61% and 22% of four to eight year olds meet fruit and vegetable guidelines respectively 15). This warrants concern as children may forgo the potential health benefits of fruits and vegetables, such as protection against chronic diseases 16) and adiposity 17). The development of these eating habits involves a complex interplay between genetic and environmental factors 18). Current literature suggests that neophobia may be a contributing factor, through hindering the acceptance of new foods differentially. In particular, more neophobic children are found to have lower preferences for and intake of both fruits and vegetables 19)..

In addition to making recommendations regarding the quantity of fruits and vegetables to consume, dietary guidelines encourage children to consume a variety of ‘colors’ from these groups due to the variation in nutrients provided by the different fruits and vegetables 20). Despite the aforementioned evidence, there has been little research regarding the impact of neophobia on the variety of fruit and vegetables consumed. In a brief review 21) it was suggested that the decline in fruit and vegetable variety observed during the third year of life 22) coincides with the emergence of the developmental phase of neophobia. In a study that measured self-reported food variety via a food choice questionnaire vegetable variety was negatively related to food neophobia in a sample of (n = 339) 4–22 year olds 23).

The potential influence of neophobia on dietary intake may translate into unhealthy weight outcomes in children at both ends of the spectrum, i.e. underweight and obesity. Current literature exploring this relationship presents contradictory results. Of four studies, two found no association 29), one observed overweight/obese children to be more neophobic 30), and another found that significantly more children classified as ‘picky’ were underweight compared with the control group 31). These contradictory results may be attributed to differences in demographic characteristics of the sample (including child age) and recruitment techniques. With inconclusive evidence, more research is required to ascertain if food neophobia is a significant predictor of weight.

A possible explanation for the relationship between food neophobia and variety of fruits and vegetables and discretionary foods is that novel foods are rejected based on the visual domain 41). In the hunter-gatherer days, plant foods posed a significant risk of poisoning 42). Hence, novel plant foods may incite a larger fear reaction as they do not ‘look right’ 43). An alternative explanation is that choices are made based on food value 44). Children are in a stage of rapid growth hence, acceptance of foods of higher energy or protein values may be more adaptive 45). Coupled with an innate predisposition towards sweet and salty tastes 46), and the increasing exposure to discretionary foods at a young age, children may more readily accept discretionary foods because of their higher energy content and sweet or salty flavor.

Taken together, more neophobic children appear to have a poorer eating pattern, with a lower variety of fruits and vegetables and higher energy intake from discretionary foods. It is well-established that high intake of fruits and vegetables can protect against chronic disease and adiposity 47). These health benefits can be maximised through consuming a variety of fruits and vegetables 48). On the other hand, discretionary foods have been proposed to displace core foods (which provide essential nutrients for optimal health) and contribute to excess energy intake, weight gain and obesity 49). Therefore, the present findings warrant concern about the potential relationship between food neophobia and children’s dietary quality.

Research has also found that individuals with autistic spectrum disorder are more likely to have rigid preferences for specific food textures, colors and tastes, which could maintain their food neophobia. Genetic factors are also recognized as a cause of food neophobia, together with psychosocial influences: if parents have food neophobia themselves, there is an increased risk of the same condition in their child.

Some degree of food neophobia is common and expected in early childhood as part of normal development, particularly ages three to seven. It does follow that food aversions reduce from the ages of eight or nine onwards and it is unusual for them to persist through adolescence and into adulthood. The symptoms and signs of food neophobia include:

A Food Neophobia Scale developed by Pilner and Hobden 50) is used for food neophobia diagnosis: participants answer these statements, grading them numerically (7 strongly agree to 1, strongly disagree) to gain an overall score. The higher the score the more neophobic an individual is. Food Neophobia Scale items were answered using a 7-point Likert scale format with answers ranging from ‘I totally disagree’ (1) to ‘I totally agree’ (7). Respondents’ food neophobia score was computed by summing the answers of the ten items, after reversing the scores of items 1, 4, 6, 9, and 10 (theoretical range 10-70). Items with an asterisk are reverse scored.

A specific Child Food Neophobia Scale (CFNS) has also been developed with questions framed for children and answered by their parents.

Food neophobia treatment can encompass one or more of the following approaches, depending upon individual diagnosis and needs:

Research has shown that an increased number of food exposures, up to 10 to 15 51) can transform initial rejection of new foods into acceptance in children of this age group. Studies have found both teacher 52) and parental modelling 53) to promote acceptance of novel food, especially if models are consuming foods of a similar color 54) and it is done enthusiastically 55). Parents have a high degree of control over exposure to food types and food-related experiences of children aged two years 56). Hence, given the potential association between food neophobia and diet quality suggested by the findings of this study 57), there is a need for interventions to target parents to encourage acceptance of novel nutritious foods into their regular diet. Health professionals can play an important role in educating parents on understanding neophobia as a developmentally normal stage but also equipping them with strategies such as repeated neutral exposure and modelling through which they can encourage their child to try (and eventually accept) novel foods. Early intervention would be ideal as eating habits established by five years can persist through adolescence into adulthood 58).