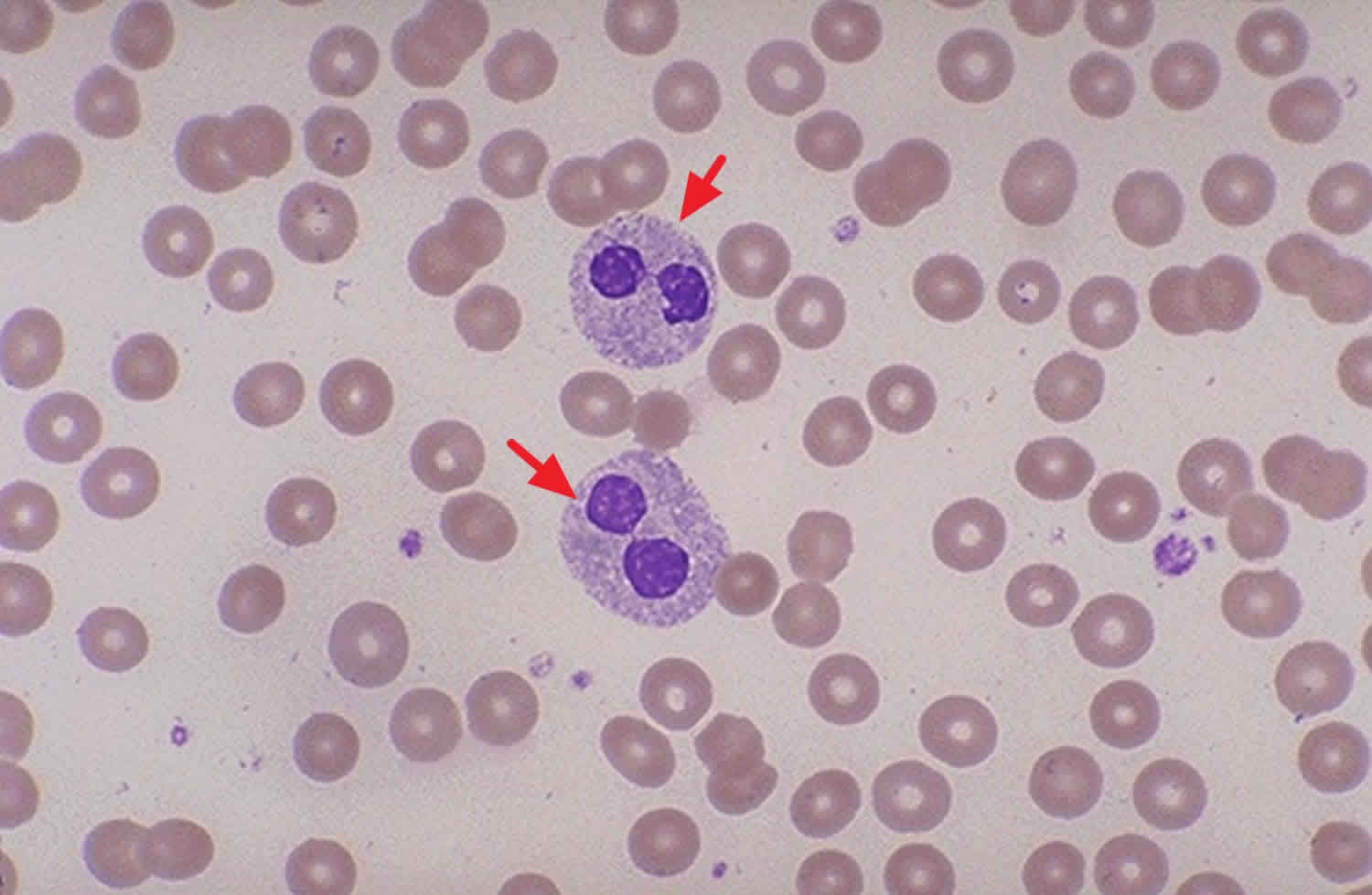 Pelger-Huet anomaly prevalence rate in the United States is estimated as 1 case in 5000 population. The prevalence rate of heterozygous Pelger-Huet anomaly is 1 case in 6000 population in the United Kingdom. The highest described incidence is in the Gelenau region of Germany (1.01%) and the Vasterbotten region of Sweden (0.6%) 4).

The LBR gene product is essential for maintaining nuclear membrane structure, and heterozygotes have at least half of their neutrophils with bilobed, dumbbell-shaped nuclei, also described as pince-nez (ie, looking like pinched-nose spectacles) 6).

Lamin B receptor (LBR) also interacts with HP-1 heterochromatin proteins; this is hypothesized to account for the excessive coarse clumping of nuclear chromatin that is observed 7). Lamin B receptor (LBR) abnormalities do not affect neutrophil function, and Pelger-Huet cells survive normally in circulation and can phagocytize and kill microorganisms 8).

Research also suggests that Pelger-Huet anomaly and HEM skeletal dysplasia (Greenberg dysplasia) are related to a defect in cholesterol synthesis, resulting from LBR point mutations that cause a loss of sterol C14 reductase activity associated with the LBR protein. This loss occurs when the point mutations lower LBR’s affinity for the reducing agent nicotinamide adenine dinucleotide phosphate (NADPH) 9).

Pelger-Huet anomaly is inherited in a highly penetrant, autosomal dominant pattern. Often autosomal dominant conditions can be seen in multiple generations within the family. If one looks back through their family history they notice their mother, grandfather, aunt/uncle, etc., all had the same condition. In cases where the autosomal dominant condition does run in the family, the chance for an affected person to have a child with the same condition is 50% regardless of whether it is a boy or a girl. These possible outcomes occur randomly. The chance remains the same in every pregnancy and is the same for boys and girls.

There are cases of autosomal dominant gene changes, or mutations, where no one in the family has it before and it appears to be a new thing in the family. This is called a de novo mutation. For the individual with the condition, the chance of their children inheriting it will be 50%. However, other family members are generally not likely to be at increased risk.

Figure 2 illustrates autosomal dominant inheritance. The example below shows what happens when dad has the condition, but the chances of having a child with the condition would be the same if mom had the condition. 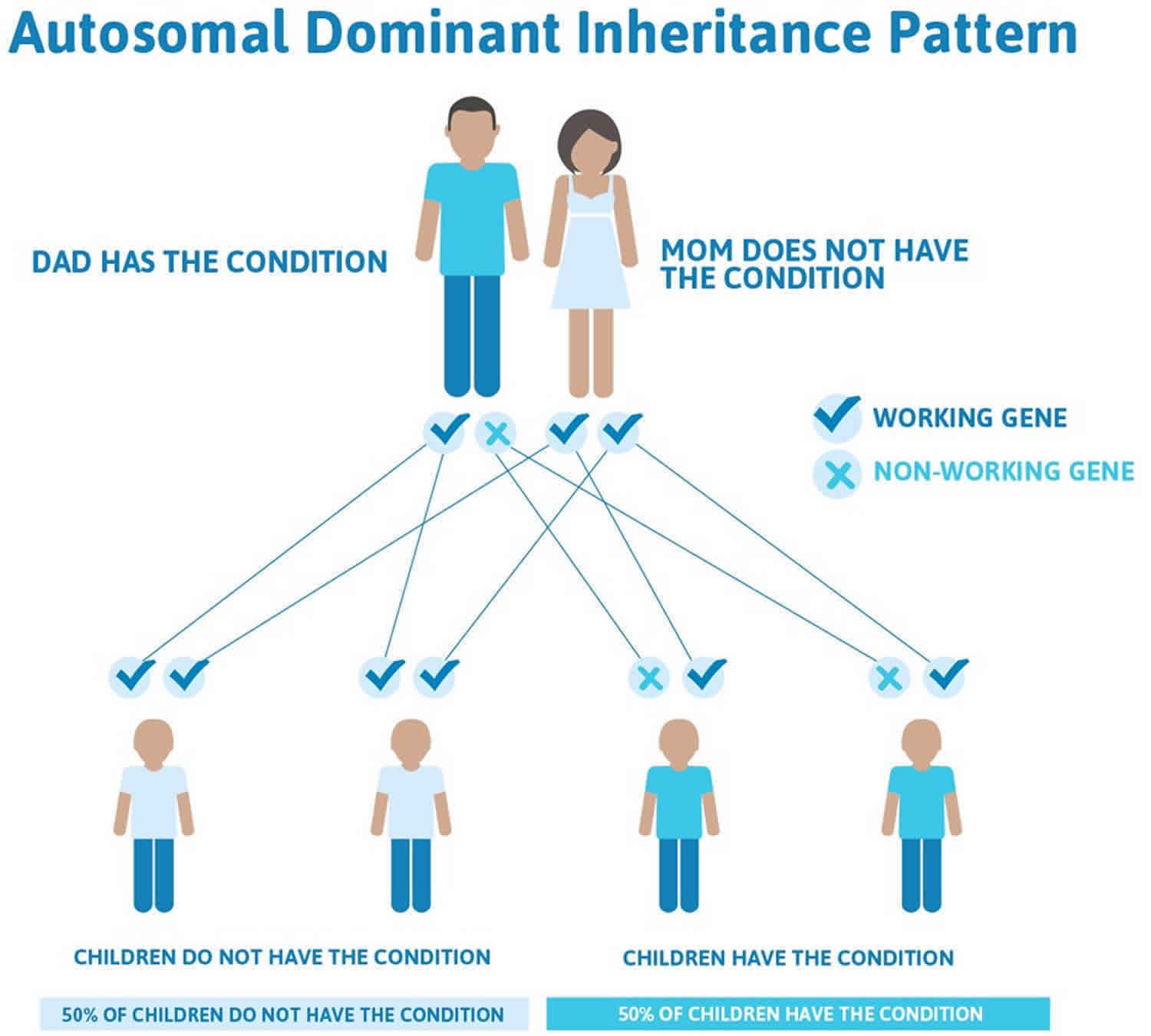 Neutrophil function is normal. Individuals with Pelger-Huet anomaly are in good health, and their natural resistance to infection is unimpaired. Individuals with the rare homozygous LBR mutations, Pelger-Huët anomaly may have skeletal anomalies 12). Affected individuals have extremely short bones in the arms and legs and abnormally flat vertebrae (platyspondyly). Other skeletal abnormalities may include short ribs and extra fingers (polydactyly). In addition, affected fetuses have extensive swelling of the body caused by fluid accumulation (hydrops fetalis).

Pelger-Huet anomaly is typically diagnosed by completing a type of blood test called a blood smear to examine the appearance of the nuclei of several types of white blood cells, including neutrophils. Normally the nuclei of these cells have a trilobed shape. In Pelger-Huet anomaly, they are bilobed, peanut, or dumb-bell shaped. They might additionally appear to not have any lobes. The structure is additionally abnormal and appear to be coarse or lumpy.