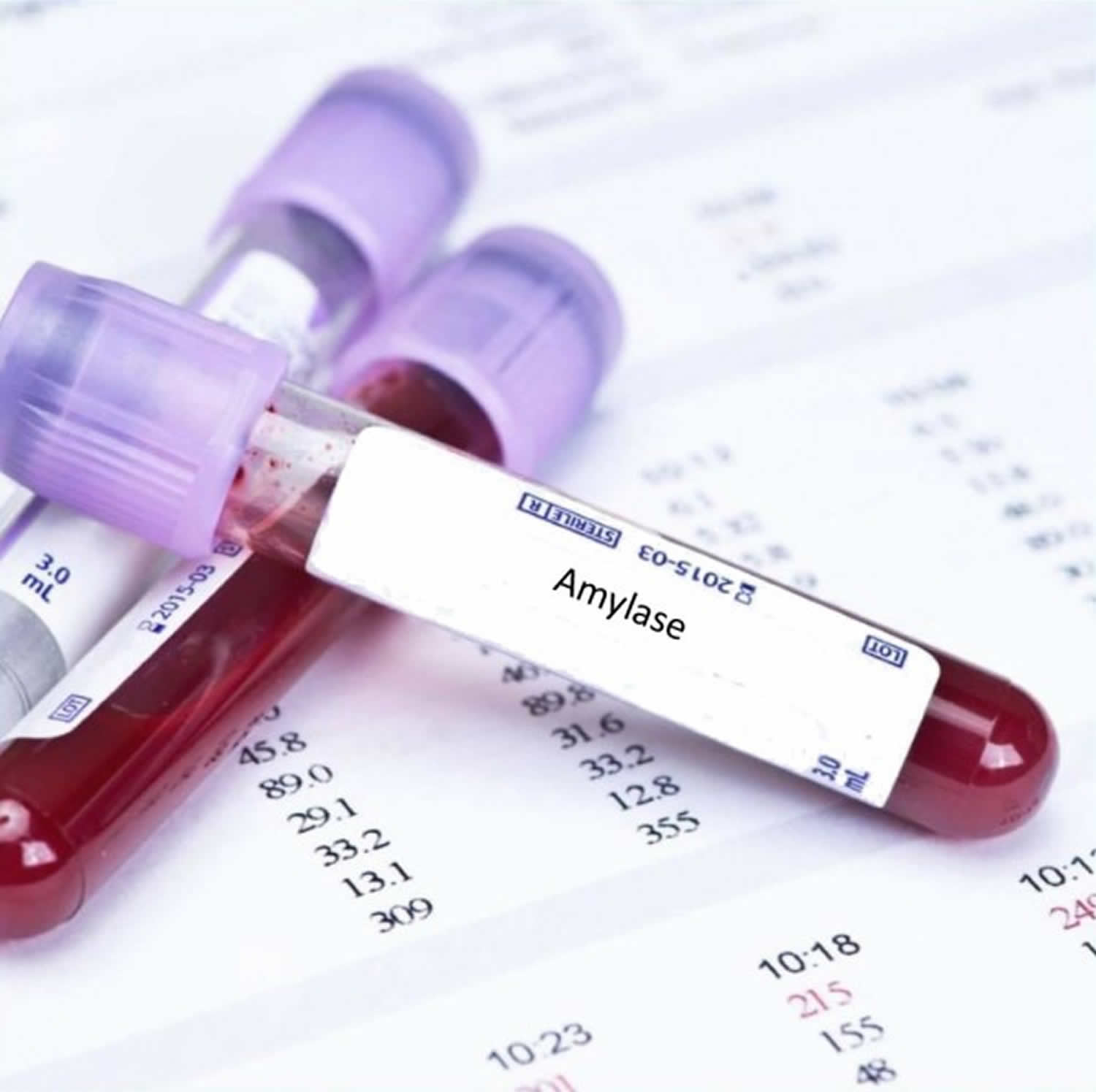 What is amylase test

Amylase test measures the amount of amylase in your blood or urine. Amylase is an enzyme hydrolase or special protein, that helps you degrade complex carbohydrates into simple sugars. Most of your amylase is made in the pancreas and salivary glands to aid in the digestion of starch. Amylase is also produced by the small intestine mucosa, ovaries, placenta, liver, and fallopian tubes. A small amount of amylase in your blood and urine is normal. A larger or smaller amount may mean that you have a disorder of the pancreas, an infection, alcoholism, or another medical condition.

Plasma amylases (P-amylase) are of relatively low molecular weight for an enzyme (55,000-60,000 daltons) and enter the urine through glomerular filtration. Conditions that cause increased entry of amylase into plasma (e.g, acute pancreatitis) will thus result in increased urinary excretion of amylase. Therefore, urinary amylase is sometimes used in the diagnosis of acute pancreatitis. However, the rate of urinary amylase excretion appears to be less sensitive than plasma markers, and is not specific for the diagnosis of acute pancreatitis.

Similar to other low-molecular-weight proteins filtered by glomeruli, amylases are reabsorbed to an extent by the proximal tubule. Thus, conditions associated with increased production and glomerular filtration of other low-molecular-weight proteins that compete with tubular reabsorption of amylase or conditions of proximal tubular injury may increase urinary amylase excretion. Also, a number of disorders other than acute pancreatitis may cause increases in plasma amylase concentrations and consequent increases in urinary amylase excretion. These conditions include burns, ketoacidosis, myeloma, light-chain proteinuria, march hemoglobinuria, acute appendicitis, intestinal perforation, and following extracorporeal circulation.

Quantitation of urinary amylase excretion is also useful in monitoring for rejection following pancreas transplantation. The duodenal cuffs of donor pancreases are often surgically anastomosed to the recipient’s bladder at the time of pancreas transplantation, allowing for drainage of exocrine pancreas fluid into the bladder. In pancreatic rejection, urinary amylase excretion decreases.

Since the clinical use of amylase activity is usually to detect pancreatitis, the pancreatic amylase (p-amylase) form provides the single most useful test in the laboratory diagnosis of acute pancreatitis.

Total serum amylase continues to be the most widely used clinical test for the diagnosis of acute pancreatitis. Its use has been justified on the basis of its accuracy of 95%. The problem with its use is that it has relatively low specificity of between 70% and 80%.

One or both types of tests may be used to help monitor amylase levels in people who are being treated for pancreatic or other disorders.

In certain cases, for example when there is an accumulation of fluid in the abdomen (ascites), an amylase test may be performed on peritoneal fluid to help make a diagnosis of pancreatitis.

What happens during an amylase test?

For an amylase blood test, a health care professional will take a blood sample from a vein in your arm, using a small needle. After the needle is inserted, a small amount of blood will be collected into a test tube or vial. You may feel a little sting when the needle goes in or out. This usually takes less than five minutes.

For an amylase urine test, you will be given instructions to provide a “clean catch” sample. The clean catch method includes the following steps:

Your health care provider may request that you collect all your urine during a 24-hour period. For this test, your health care provider or laboratory will give you a container and specific instructions on how to collect your samples at home. Be sure to follow all instructions carefully. This 24-hour urine sample test is used because the amounts of substances in urine, including amylase, can vary throughout the day. So collecting several samples in a day may give a more accurate picture of your urine content.

Amylase tests are sometimes used to monitor treatment of cancers involving the pancreas and after the removal of gallstones that have caused gallbladder attacks.

If your health care provider suspects you have pancreatitis, he or she may order a lipase blood test, along with an amylase blood test. Lipase is another enzyme produced by the pancreas. Lipase tests are considered to be more accurate for detecting pancreatitis, especially in pancreatitis related to alcohol abuse.

What is lipase test?

Lipase is one of several enzymes produced by the pancreas to help digest dietary fats. Lipase test measures the amount of lipase in your blood.

Lipase is transported through the pancreatic duct and into the first part of the small intestine (duodenum), where it helps break down dietary triglycerides (a form of fat) into fatty acids. The pancreas is the primary source of lipase, but cells in other areas of the body involved with digestion and nutrient absorption also produce lipase, including those in the tongue, stomach and liver.

Lipase is usually present in the blood in small quantities. When cells in the pancreas are injured, like with pancreatitis, or when the pancreatic duct is blocked by a gallstone or, in rare cases, by a pancreatic tumor, increased amounts of lipase enter the blood and result in higher concentrations in the blood.

The blood test for lipase is most often used, along with an amylase test, to help diagnose and monitor acute pancreatitis. It may also be used to diagnose and monitor chronic pancreatitis and other disorders that involve the pancreas but is not as useful of a test for these conditions because lipase levels remain elevated for longer periods and may not reveal clinical progress.

Lipase testing is also occasionally used in the diagnosis and follow-up of cystic fibrosis, celiac disease, and Crohn disease.

A urine amylase test (24 h urine collection with no preservative) may also be ordered. Typically, its level will mirror blood amylase concentrations, but both the rise and fall will occur later. Sometimes a urine creatinine clearance may be ordered along with the urine amylase to help evaluate the ratio of amylase to creatinine that is filtered by the kidneys. This ratio is used to assess kidney function because improper function can result in a slower rate of amylase clearance.

Urinary amylase is elevated in acute pancreatitis, but the test has poor sensitivity and specificity.

Macroamylasemia is the presence of an abnormal substance called macroamylase in the blood 1).

Macroamylase is a substance that consists of an enzyme, called amylase, attached to a protein. Because it is large, macroamylase is filtered very slowly from the blood by the kidneys.

Most people with macroamylasemia do not have a serious disease that is causing it, but the condition has been associated with:

Macroamylasemia does not cause symptoms.

When is amylase test ordered?

A blood amylase test may be ordered when a person has symptoms of a pancreatic disorder, such as:

A urine amylase test may be ordered along with or following a blood amylase test. One or both may also be ordered periodically when a health practitioner wants to monitor a person to evaluate the effectiveness of treatment and to determine whether amylase levels are increasing or decreasing over time.

Note: Normal value ranges may vary slightly among different laboratories. Talk to your provider about the meaning of your specific test results.

The examples above show the common measurements for results for these tests. Some laboratories use different measurements or may test different specimens.

High levels of amylase may indicate:

Low levels of amylase can indicate:

A high amylase level in the blood may indicate the presence of a condition affecting the pancreas.

Amylase levels may also be significantly increased in people with pancreatic duct obstruction and pancreatic cancers.

In general, urine amylase levels rise in proportion to blood amylase levels and will stay elevated for several days after blood levels have returned to normal.

An increased level of amylase in peritoneal fluid can occur in acute pancreatitis but may also occur in other abdominal disorders, such as obstructed intestine or decreased blood flow to the intestines (infarct).

A low amylase level in blood and urine in a person with pancreatitis symptoms may indicate permanent damage to the amylase-producing cells in the pancreas. Decreased levels can also be due to kidney disease and toxemia of pregnancy.

Increased blood amylase levels with normal to low urine amylase levels may indicate the presence of a macroamylase, a benign complex of amylase and other proteins that accumulates in the blood.

Pancreatic amylase is elevated in acute pancreatitis within 12 hours of onset and persists 3 to 4 days. The elevation is usually 4-fold to 6-fold the upper reference limit.

Macroamylase may cause small, but persistent elevations of p-amylase over weeks or months. This is usually accompanied by a reduced amylase clearance. This elevated pancreatic amylase is not diagnostic for pancreatitis. By utilizing serum lipase and urinary amylase values, the presence or absence of macroamylase may be determined.

An elevation of total serum alpha-amylase does not specifically indicate a pancreatic disorder since the enzyme is produced by the salivary glands, mucosa of the small intestine, ovaries, placenta, liver, and the lining of the fallopian tubes. Two isoenzymes, pancreatic and salivary, are found in serum. Pancreatic amylase has been shown to be more useful than total amylase when evaluating patients with acute pancreatitis.

Do elevated amylase levels always mean that I have a pancreatic condition?

No. Amylase levels may also be significantly increased in people with gallbladder attacks. Urine and blood amylase levels may be moderately elevated with a variety of other conditions, such as ovarian cancer, lung cancer, tubal pregnancy, acute appendicitis, diabetic ketoacidosis, mumps, intestinal obstruction, or perforated ulcer, but amylase tests are not generally used to diagnose or monitor these disorders.

Can medications that I am taking affect the amylase level?

Yes. Some drugs that may cause amylase to rise include aspirin, diuretics, oral contraceptives, corticosteroids, indomethacin, ethyl alcohol, and opiates (such as codeine and morphine). 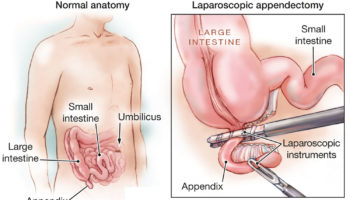 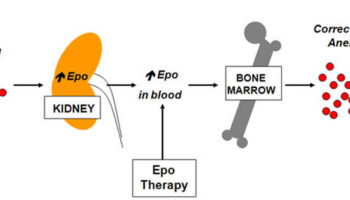 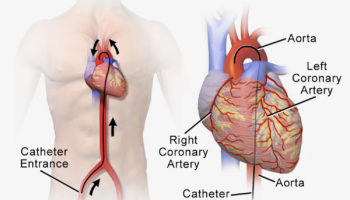 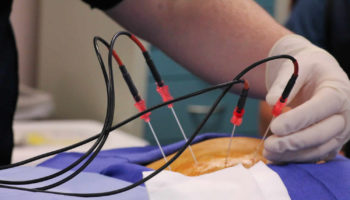 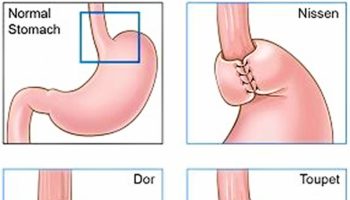