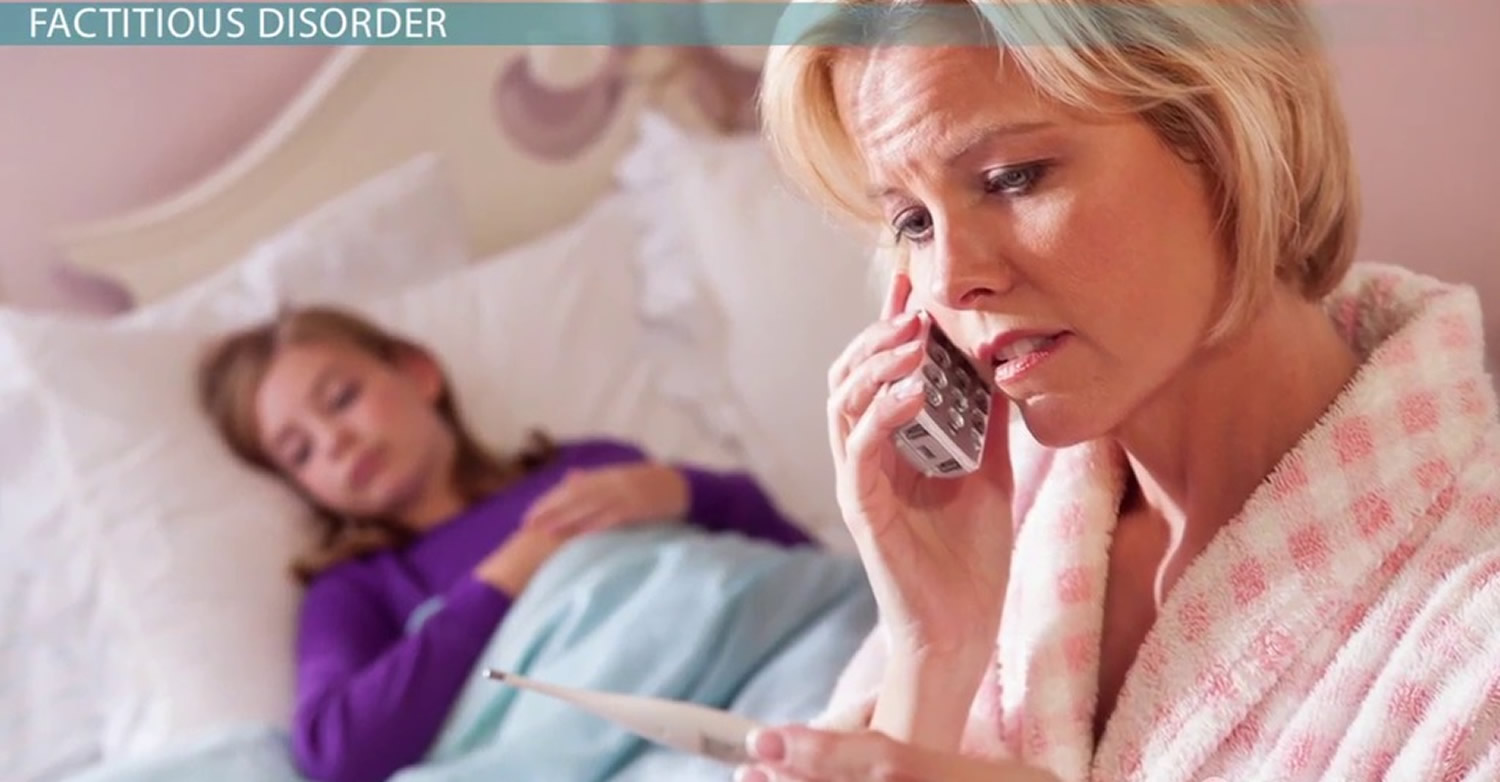 What is factitious disorder

The essential feature of factitious disorder is the falsification of medical or psychological signs and symptoms in oneself or others that are associated with the identified deception. Individuals with factitious disorder can also seek treatment for themselves or another following induction of injury or disease. Methods of illness falsification can include exaggeration, fabrication, simulation, and induction. While a preexisting medical condition may be present, the deceptive behavior or induction of injury associated with deception causes others to view such individuals (or another) as more ill or impaired, and this can lead to excessive clinical intervention. Individuals with factitious disorder might, for example, report feelings of depression and suicidality following the death of a spouse despite the death not being true or the individual’s not having a spouse; deceptively report episodes of neurological symptoms (e.g., seizures, dizziness, or blacking out); manipulate a laboratory test (e.g., by adding blood to urine) to falsely indicate an abnormality; falsify medical records to indicate an illness; ingest a substance (e.g., insulin or warfarin) to induce an abnormal laboratory result or illness; or physically injure themselves or induce illness in themselves or another (e.g., by injecting fecal material to produce an abscess or to induce sepsis).

The prevalence of factitious disorder is unknown, likely because of the role of deception in this population. Among patients in hospital settings, it is estimated that about 1 % of individuals have presentations that meet the criteria for factitious disorder.

The course of factitious disorder is usually one of intermittent episodes. Single episodes and episodes that are characterized as persistent and unremitting are both less common. Onset is usually in early adulthood, often after hospitalization for a medical condition or a mental disorder. When factitious disorder is  imposed on another, the disorder may begin after hospitalization of the individual’s child or other dependent. In individuals with recurrent episodes of falsification of signs and symptoms of illness and/ or induction of injury, this pattern of successive deceptive contact with medical personnel, including hospitalizations, may become lifelong.

People with factitious disorder may be well aware of the risk of injury or even death as a result of self-harm or the treatment they seek, but they can’t control their behaviors and they’re unlikely to seek help. Even when confronted with objective proof — such as a videotape — that they’re causing their illness, they often deny it and refuse psychiatric help.

If you suspect that a person or loved one may be faking or exaggerating illnesses in themselves or someone else, it is important to take action as soon as possible. Try speaking to the person first about your concerns without accusing them of making it up. If they refuse to discuss it, become angry or engage in further self -harm or ongoing symptoms, contact a doctor to seek help and further advice. Try to monitor any medications they are taking or giving to someone else in order to control abuse or further harm from side effects or overdose. If your loved one causes self-inflicted injury or attempts suicide, call your local emergency number for emergency medical help or, if you can safely do so, take him or her to an emergency room immediately.

Factitious disorder is challenging to identify and hard to treat. However, medical and psychiatric help are critical for preventing serious injury and even death caused by the self-harm typical of this disorder.

Malingering is differentiated from factitious disorder by the intentional reporting of symptoms for personal gain (e.g., money, time off work). In contrast, the diagnosis of factitious disorder requires that the individual is taking surreptitious actions to misrepresent, simulate, or cause signs or symptoms of illness or injury in the absence of obvious external rewards.

Factitious disorder is not the same as inventing medical problems for practical benefit, such as getting out of work or winning a lawsuit. Although people with factitious disorder know they are causing their symptoms or illnesses, they may not understand the reasons for their behaviors or recognize themselves as having a problem.

The cause of factitious disorder is unknown. However, the disorder may be caused by a combination of psychological factors and stressful life experiences. Some research indicates that past abuse or neglect as a child may contribute, poor health or frequent need for hospitalization, and possibly a link with personality disorders.

Those who inflict illness on others may do so for the reasons mentioned but also to assume the importance of a carer role. It may also be related to a grievance with the medical profession or a bad experience in hospital or with a previous treatment for the person or a family member. Often it is to draw attention and sympathy to themselves.

Several factors may increase the risk of developing factitious disorder, including:

Factitious disorder is considered rare, but it’s not known how many people have the disorder. Some people use fake names to avoid detection, some visit many different hospitals and doctors, and some are never identified — all of which make it difficult to get a reliable estimate.

Factitious disorder symptoms can range from mild (slight exaggeration of symptoms) to severe (previously called Munchausen syndrome). The person may make up symptoms or even tamper with medical tests to convince others that treatment, such as high-risk surgery, is needed. The person with factitious disorder may not understand their behavior or realize the results of their actions. It is not an attempt to miss work or school, but a real creation of illness or injury. Generally when imposed on another person (by proxy), it is a parent inflicting harm on a child, and is a form of child abuse.

Factitious disorder symptoms involve mimicking or producing illness or injury or exaggerating symptoms or impairment to deceive others. People with the disorder go to great lengths to hide their deception, so it may be difficult to realize that their symptoms are actually part of a serious mental health disorder. They continue with the deception, even without receiving any visible benefit or reward or when faced with objective evidence that doesn’t support their claims.

Factitious disorder signs and symptoms may include:

Factious disorder imposed on another

Factitious disorder imposed on another (previously called Munchausen syndrome by proxy) is when someone falsely claims that another person has physical or psychological signs or symptoms of illness, or causes injury or disease in another person with the intention of deceiving others.

People with this disorder present another person as sick, injured or having problems functioning, claiming that medical attention is needed. Usually this involves a parent harming a child. This form of abuse can put a child in serious danger of injury or unnecessary medical care.

How those with factitious disorder fake illness

Because people with factitious disorder become experts at faking symptoms and diseases or inflicting real injuries upon themselves, it may be hard for health care professionals and loved ones to know if illnesses are real or not.

People with factitious disorder make up symptoms or cause illnesses in several ways, such as:

People with factitious disorder are willing to risk their lives to be seen as sick. They frequently have other mental health disorders as well. As a result, they face many possible complications, including:

Diagnosing factitious disorder is often extremely difficult. People with Factitious Disorder become very good at faking symptoms and illness, therefore making it difficult for doctors to determine if the illness is real or not. People with factitious disorder are experts at faking many different diseases and conditions. And often they do have real and even life-threatening medical conditions, even though these conditions may be self-inflicted. They may be unable to control their behavior when creating symptoms, injury or illness. They will seek help for the conditions they have created but rarely for the treatment of factitious disorder itself, and in fact may deny any association with this disorder. The person’s use of multiple doctors and hospitals, the use of a fake name, and privacy and confidentiality regulations may make gathering information about previous medical experiences difficult or even impossible.

The doctor must consider all symptoms and rule out any possible physical or other mental illnesses before diagnosing factitious disorder. If there is no apparent physical reason for the symptoms and the person continues to insist they exist, the doctor may refer them to a psychiatrist or psychologist based on the patient’s behavior and attitude toward medical treatment.

Diagnosis is based on objectively identifying symptoms that are made up, rather than the person’s intent or motivation for doing so.

A doctor may suspect factitious disorder when:

Some signs the doctor may observe include:

To help determine if someone has factitious disorder, doctors:

Factitious Disorder Imposed on Self

Direct accusations of factitious disorder typically make the affected person angry and defensive, causing him or her to abruptly end a relationship with a doctor or hospital and seek treatment elsewhere. So the doctor may try to create an “out” that spares your loved one the humiliation of admitting to faking symptoms and offer information and help.

For example, the doctor may reassure your loved one that not having an explanation for medical symptoms is stressful and suggest that the stress may be responsible for some physical complaints. Or the doctor may ask your loved one to agree that, if the next medical treatment doesn’t work, they’ll explore together the idea of a possible psychological cause for the illness.

Either way, the doctor will try to steer your loved one toward care with a mental health professional. And both doctors and loved ones can reinforce healthy productive behaviors without giving undo attention to symptoms and impairments.

Treatment often focuses on managing the condition, rather than trying to cure it. Treatment generally includes:

Treatment may not be accepted or may not be helpful, especially for people with severe factitious disorder. In these cases, the goal may be to avoid further invasive or risky treatments. In cases where the factitious disorder is imposed on others, the doctor assesses for abuse and reports the abuse to the appropriate authorities, if indicated.

Along with professional treatment, these tips may help people who have factitious disorder: