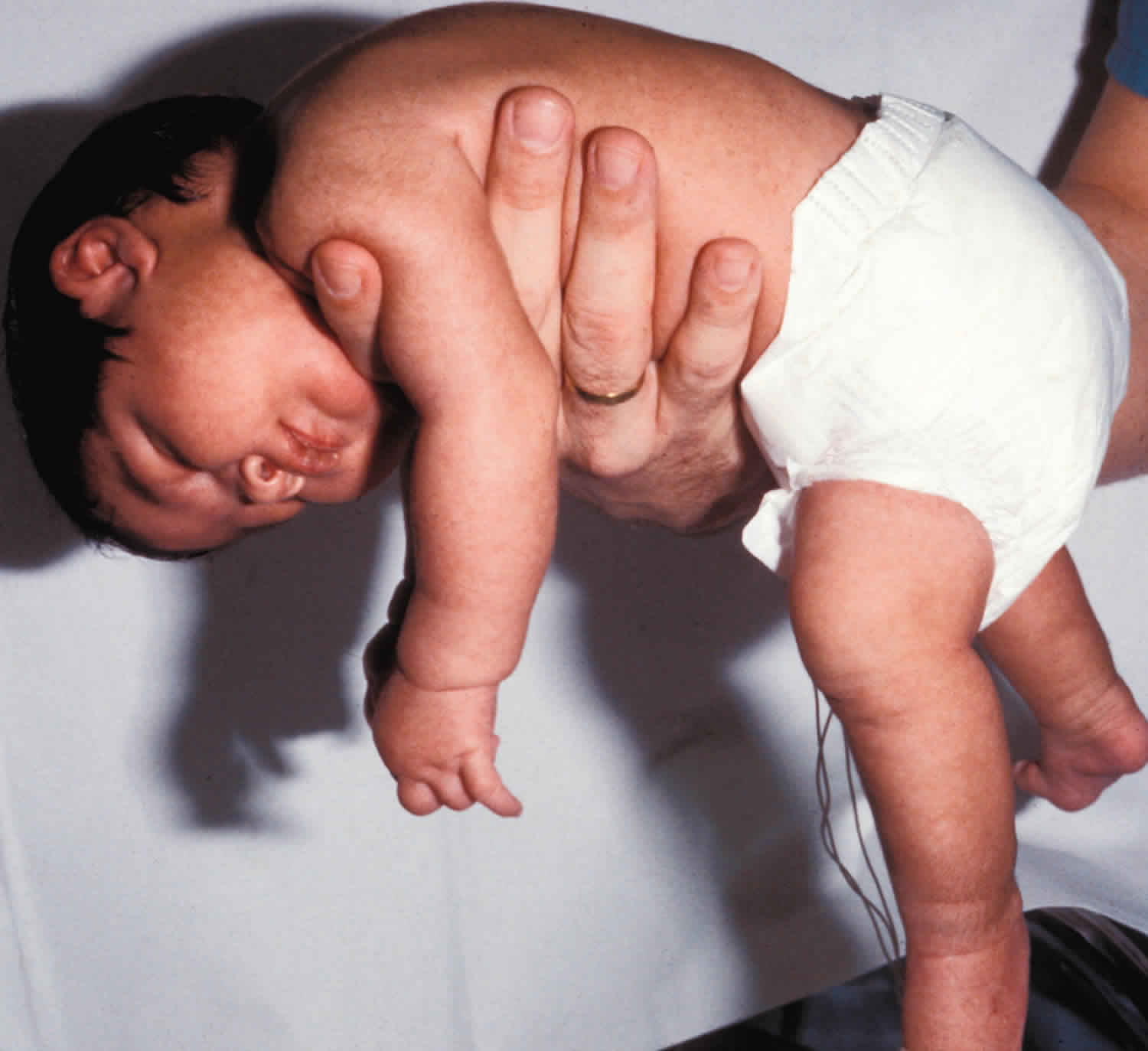 Floppy baby syndrome also known as hypotonia, which means decreased muscle tone or a state of low muscle tone often involving reduced muscle strength. It is important to recognize that hypotonia is not equivalent to weakness. Hypotonia is not a specific medical disorder, but a potential manifestation of many different diseases and disorders that affect motor nerve control by the brain or muscle strength.

Floppy baby syndrome can be a condition on its own, called benign congenital hypotonia, or it can be indicative of another problem where there is progressive loss of muscle tone, such as muscular dystrophy or cerebral palsy. Hypotonia is usually detected during infancy.

Hypotonia is a lack of resistance to passive movement, whereas muscle weakness results in impaired active movement. Central hypotonia originates from the central nervous system, while peripheral hypotonia is related to problems within the spinal cord, peripheral nerves and/or skeletal muscles 1). Recognizing hypotonia, even in early infancy, is usually relatively straightforward, but diagnosing the underlying cause can be difficult and often unsuccessful. The long-term effects of hypotonia on a child’s development and later life depend primarily on the severity of the muscle weakness and the nature of the cause. Some disorders have a specific treatment but the principal treatment for most hypotonia of idiopathic or neurologic cause is physical therapy, occupational therapy for remediation, and/or music therapy.

Hypotonia is thought to be associated with the disruption of afferent input from stretch receptors and/or lack of the cerebellum’s facilitatory efferent influence on the fusimotor system, the system that innervates intrafusal muscle fibers thereby controlling muscle spindle sensitivity 2). On examination a diminished resistance to passive movement will be noted and muscles may feel abnormally soft and limp on palpation 3). Diminished deep tendon reflexes also may be noted. Hypotonia is a condition that can be helped with early intervention.

Hypotonia are usually of unknown origin. Hypotonia can be caused by a variety of conditions, scientists believe that hypotonia may be caused by a variety of conditions such trauma that involve the central nervous system, environmental factors, genetic disorders and muscle disorders 4). A retrospective, cross–sectional study was done in Iran to find out the main cause of hypotonia, they found that central hypotonia was the cause in (94.4%) and peripheral in (3.7%) 5). The most common cause of central hypotonia was idiopathic central hypotonia, followed by cerebral palsy, brain structural abnormality, inborn errors of metabolism , genetic disorders and syndrome 6).

Some common causes of hypotonia can include but are not limited to:

Genetic disorders are the most common cause:

The following are common symptoms associated with hypotonia. Each child may experiences symptoms differently. Symptoms vary depending on the underlying cause of the problem.

Some hypotonias are not progressive and are of an unknown origin, a condition known as benign congenital hypotonia.

The signs and symptoms of hypotonia resemble that of other conditions. Always consult a physician for a diagnosis.

Your child’s doctor will obtain a medical history for your family and your child and will perform a physical examination that will likely include a detailed muscle function and neurological examination. The latter, also called a neuro exam, may be performed with instruments, such as lights and reflex hammers, and usually does not cause any pain to the child.

Depending on what your child’s doctor suspects, the following tests may also be used to find out what’s causing your child’s muscle weakness:

Specific treatment for hypotonia will be determined by your child’s physician based on:

Once the correct diagnosis is confirmed, the cause is treated first, followed by symptomatic and supportive therapy for the hypotonia.

No specific therapy is required to treat benign congenital hypotonia, but children with this problem may periodically need treatment for common occurrences associated with hypotonia, such as recurrent joint dislocations.

If the underlying cause is known, treatment is tailored to the specific disease, followed by symptomatic and supportive therapy for the hypotonia. In very severe cases, treatment may be primarily supportive, such as mechanical assistance with basic life functions like breathing and feeding, physical therapy to prevent muscle atrophy and maintain joint mobility, and measures to try to prevent opportunistic infections such as pneumonia. Treatments to improve neurological status might involve such things as medication for a seizure disorder, medicines or supplements to stabilize a metabolic disorder, or surgery to help relieve the pressure from hydrocephalus (increased fluid in the brain).

Treatment programs to help increase muscle strength and sensory stimulation programs are developed once the cause of your child’s hypotonia is established. Such programs usually involve physical therapy through an early intervention or school-based program among other forms of therapy.

The National Institute of Neurological Disorders and Stroke states that physical therapy can improve motor control and overall body strength in individuals with hypotonia. This is crucial to maintaining both static and dynamic postural stability, which is important since postural instability is a common problem in people with hypotonia 12). A physiotherapist can develop patient specific training programs to optimize postural control, in order to increase balance and safety 13). To protect against postural asymmetries the use of supportive and protective devices may be necessary 14). Physical therapists might use neuromuscular/sensory stimulation techniques such as quick stretch, resistance, joint approximation, and tapping to increase tone by facilitating or enhancing muscle contraction in patients with hypotonia.[3] For patients who demonstrate muscle weakness in addition to hypotonia strengthening exercises that do not overload the muscles are indicated 15). Electrical Muscle Stimulation, also known as Neuromuscular Electrical Stimulation (NMES) can also be used to “activate hypotonic muscles, improve strength, and generate movement in paralyzed limbs while preventing disuse atrophy” 16). When using NMES it is important to have the patient focus on attempting to contract the muscle(s) being stimulated. Without such concentration on movement attempts, carryover to volitional movement is not feasible 17). Neuromuscular Electrical Stimulation (NMES) should ideally be combined with functional training activities to improve outcomes.

Occupational therapy can assist the patient with increasing independence with daily tasks through improvement of motor skills, strength, and functional endurance. Speech-language therapy can help with any breathing, speech, and/or swallowing difficulties the patient may be having. Therapy for infants and young children may also include sensory stimulation programs.” A physical therapist may recommend an ankle/foot orthosis to help the patient compensate for weak lower leg muscles. Toddlers and children with speech difficulties may benefit greatly by using sign language.

Central hypotonia due to static usually improves with time. The prognosis is worst for hypotonia of progressive central disorders.

Children with mild hypotonia may not experience developmental delay, although some children acquire gross motor skills (sitting, walking, running, jumping) more slowly than most. Most hypotonic children eventually improve with therapy and time. Some children are more severely affected, requiring walkers and wheelchairs and other adaptive and assistive equipment.