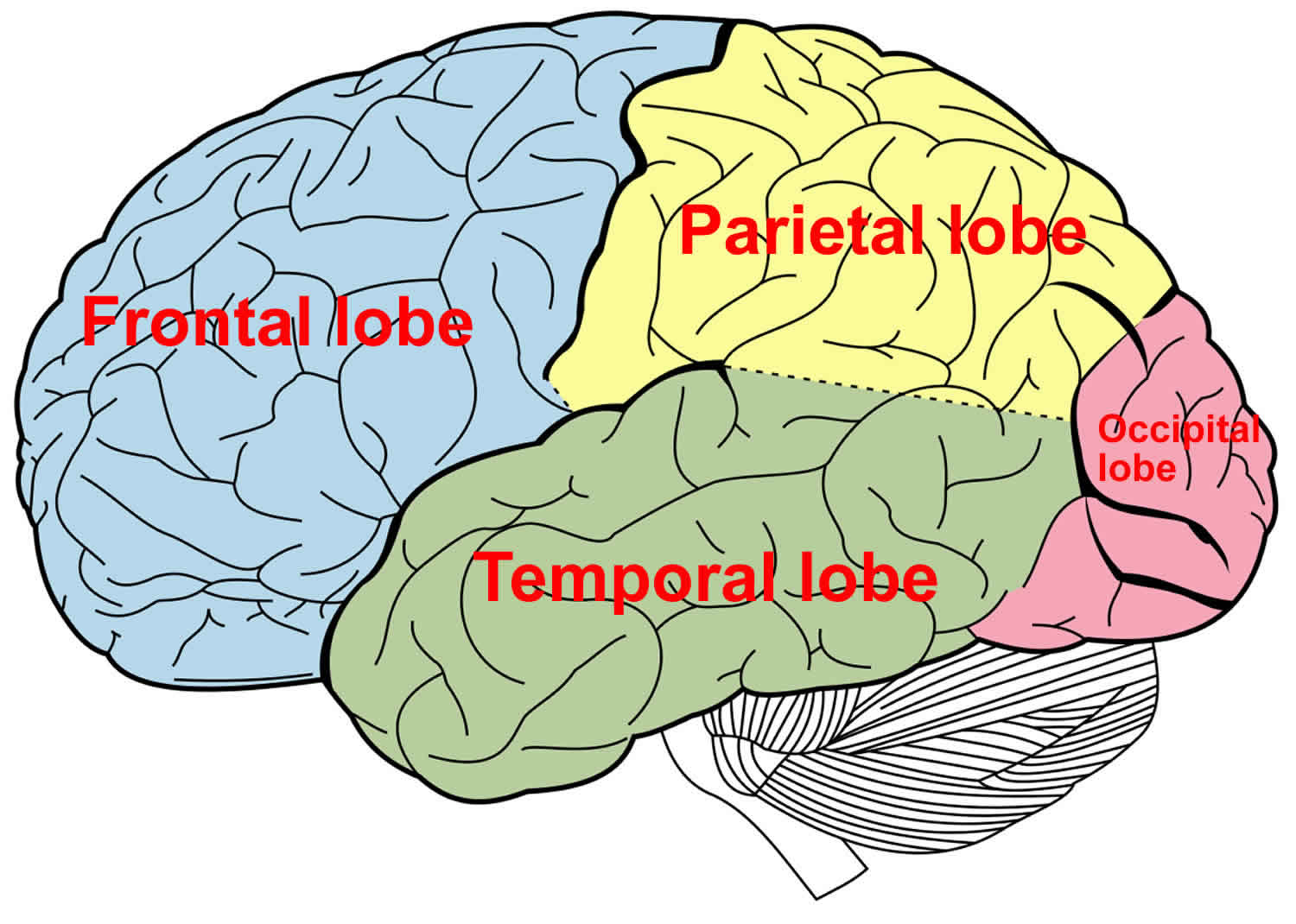 The temporal lobe, on the lateral side of the hemisphere, lies in the middle cranial fossa deep to the temporal bone. The temporal lobe is separated from the overlying parietal and frontal lobes by the deep lateral sulcus.

The temporal lobe is crucial in many essential activities such as processing of memory, language, and emotion.

The temporal lobe is involved in:

The hippocampal formation, located in the temporal lobe, consists of the hippocampus (“sea horse”) and the parahippocampal gyrus. These regions encode, consolidate, and later retrieve memories of facts and events. The hippocampal formation receives information to be remembered from the rest of the cerebral cortex; it processes these data and returns them to the cortex, where they are stored as long-term memories.

The temporal lobe can be damaged by infection, trauma, ischemia, and neoplasia. Lesions in the temporal lobe can stimulate or inhibit the functions mentioned above. The syndrome of Kluver and Bucy 4) provided an extreme example of changed behavior following bilateral temporal lobectomy in monkeys. The animals became unnaturally docile, exhibited excessive and abnormal sexual behavior, lost the ability to be trained, and had a condition that the authors termed “psychic blindness,” in which tactile exploration of objects with the mouth replaced their visual recognition. The equivalent human syndrome is rare and usually associated with pathology extending beyond the temporal lobes 5). Fragments of the classical syndrome, such as visual field defects, visual agnosia, and inability to consolidate new memories, occur more frequently, with destructive lesions in parts of one or both temporal lobes. 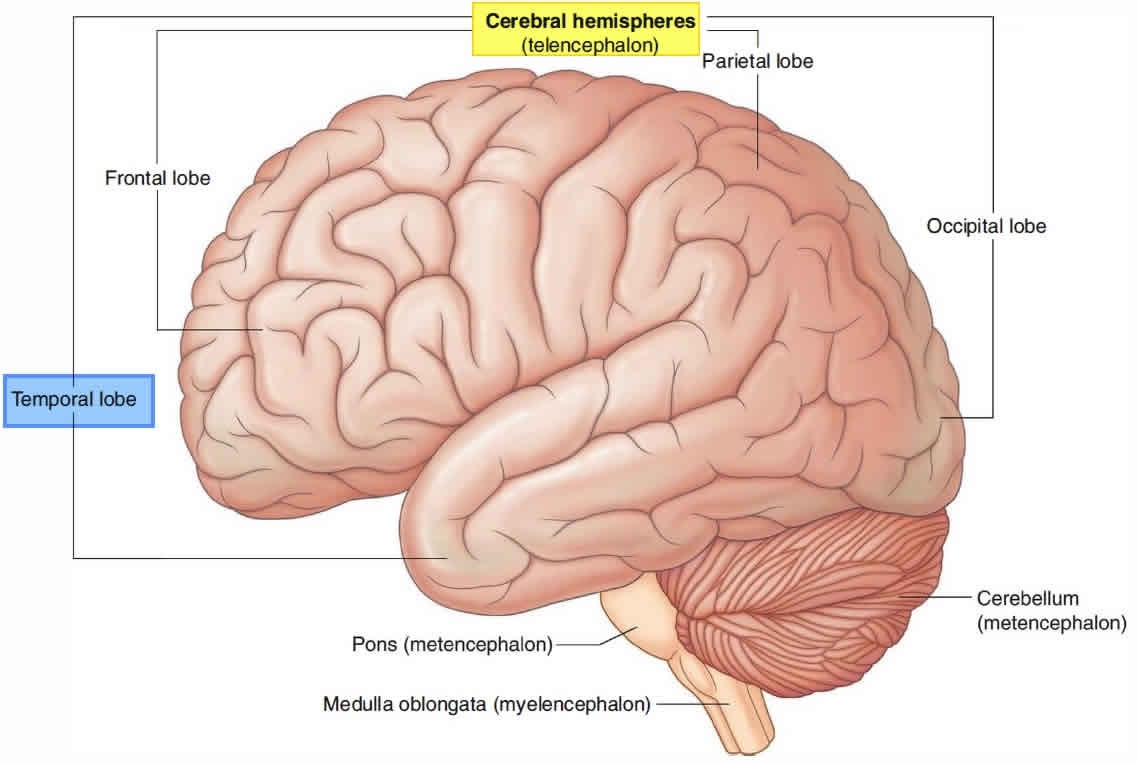 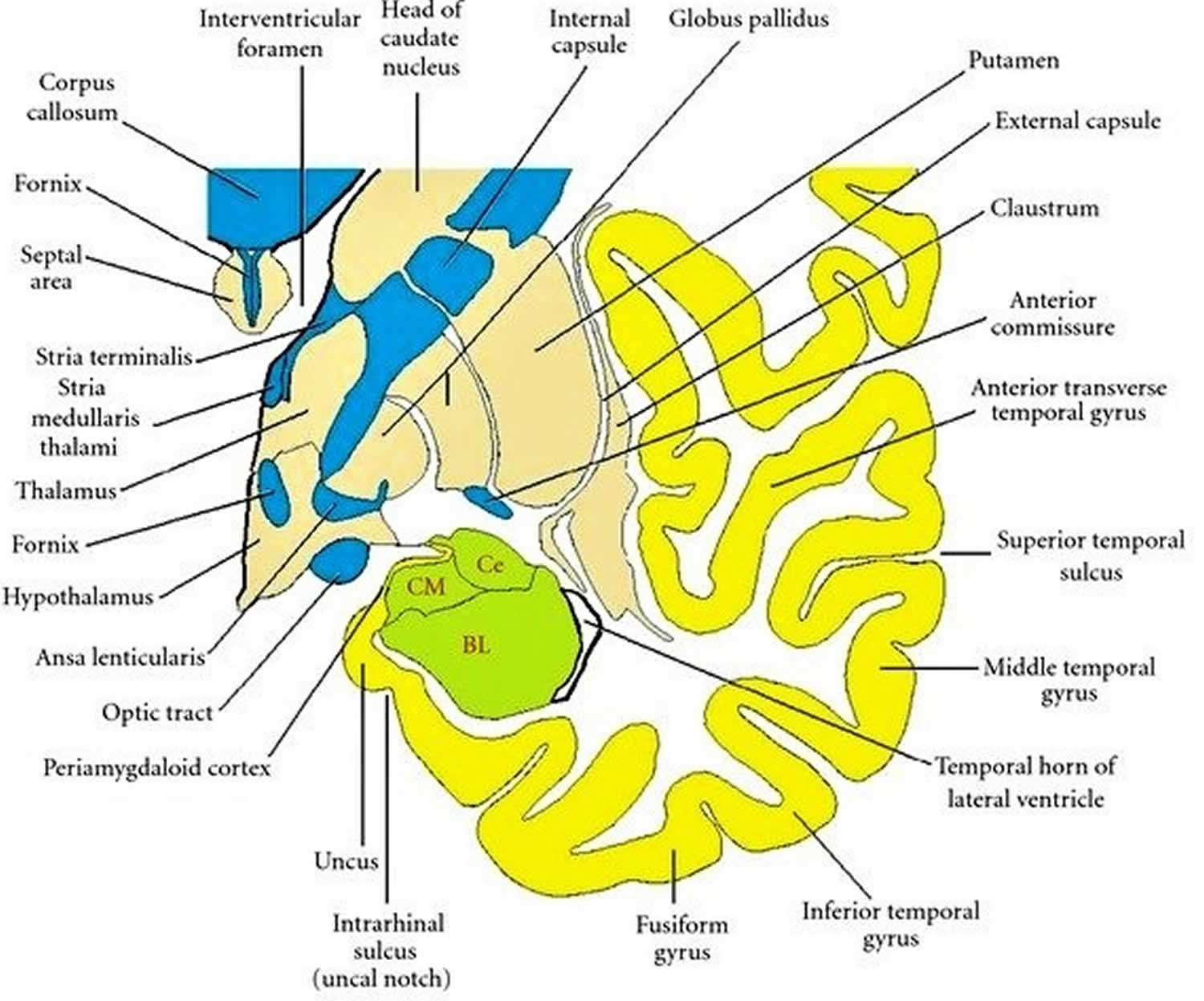 Footnote: Drawing of a coronal section through the temporal lobe and adjacent structures, at a level anterior to the hippocampal head. The amygdala is coloured green, with the positions of its three nuclear groups indicated: corticomedial (CM), basolateral (BL), and central (Ce). Selected bodies of white matter are coloured blue. [Source 6) ]

Figure 3. Boundaries of the temporal lobe

Footnote: Boundaries of the temporal lobe and positions of major sulci and gyri and other anatomical landmarks of the lateral and medial surfaces of the left cerebral hemisphere. 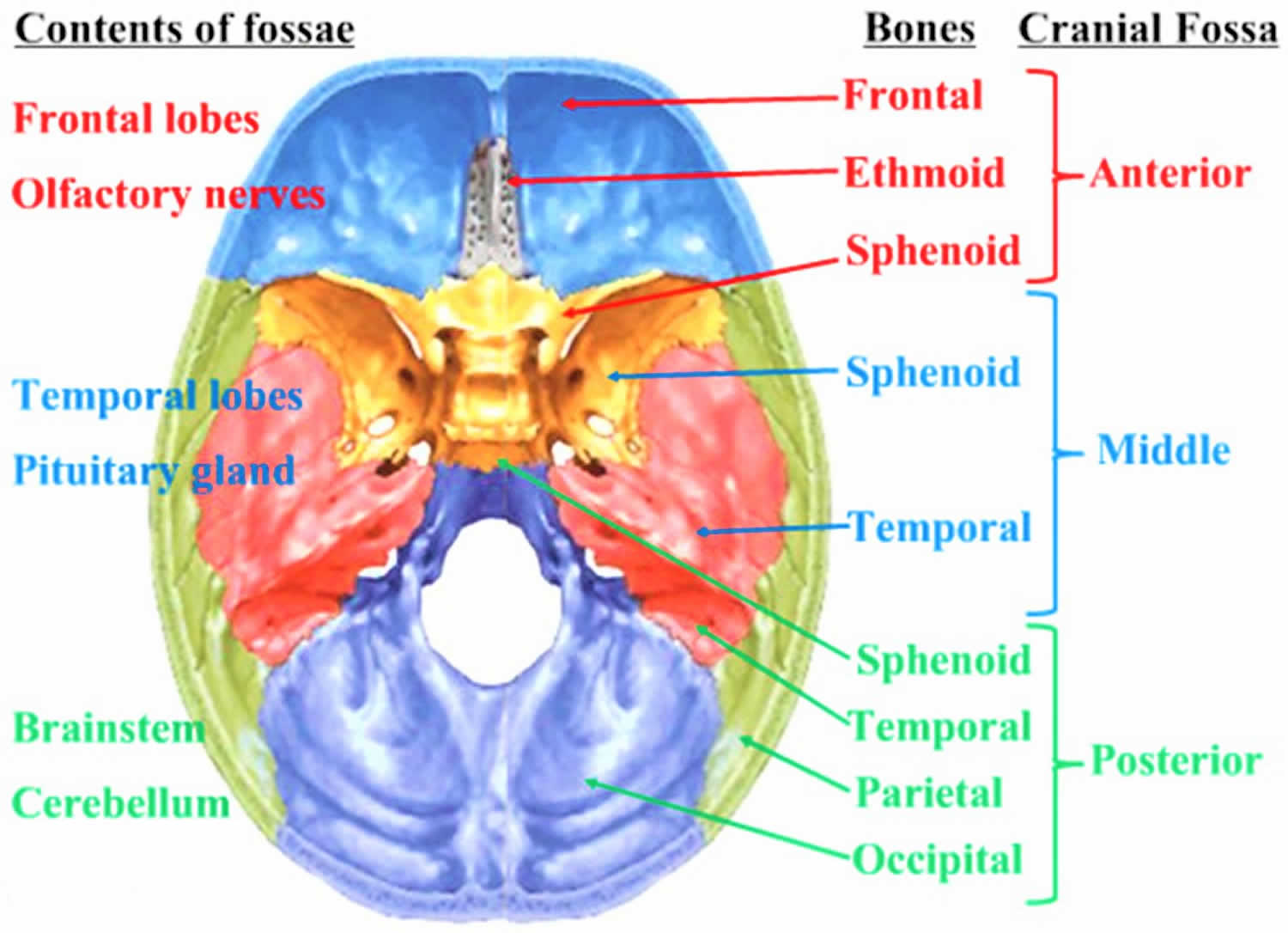 Where is the temporal lobe located?

What does the temporal lobe do?

The primary functions of the temporal lobe are to process sensory information and derive it into meaningful memories, language, and emotions 8). The temporal lobe is responsible primarily for declarative memory, which is memory that can be said out loud, and is subdivided into episodic (life events) and semantic (fact-like) memory. Located within the middle temporal lobe are the hippocampus and the amygdala. The hippocampus manages the formation of new memories and the conversion of short-term memories into long-term ones. The hippocampus communicates closely with the amygdala, which is responsible for the processing of emotions.

The temporal lobe also plays an essential role in processing sounds. It houses the primary auditory cortex and the superior temporal gyrus. The primary auditory cortex can process input from the ears into meaningful units like words and sentences. The sounds we hear first enter the brain in an area within the superior temporal gyrus traveling from the cochlea.

Parts of the temporal lobe aid in processing visual stimuli, primarily to allow us to recognize objects. The fusiform gyrus distinguishes faces, and the parahippocampal gyrus identifies locations and landscapes.

A specialized area of the temporal lobe, known as the Wernicke area, is found on the dominant hemisphere. It is responsible for processing written and spoken language.

Uncontrolled damage to the temporal lobe poses a significant threat to the quality of a patient’s life. A review of 56 localized lesions to the temporal lobe showed widespread effects on patient lives. The most common symptoms observed are mental disturbances generally categorized as a confused state. The secondary ailment of temporal lesions is personality changes, which ranges widely from slight emotional changes to homicidal tendencies. Of lesser frequency but still reported include symptoms of muscular pareses, somatic seizures, psychical seizures, autonomic seizures, visual field defects, and speech disorders 9).

Damage to the temporal lobes can result in:

Wernicke aphasia is one clinical presentation of damage to the temporal lobe. It is seen often in patients who have suffered an ischemic stroke to the temporal lobe. Less frequently, it affects patients with infections, trauma, tumors, central nervous system infections, and other degenerative brain conditions. Wernicke aphasia, also known as receptive aphasia, impairs language function. Patients presenting with this aphasia can still speak with normal rate and tone but will often misuse words and form nonsensical sentences. This aphasia is in contrast to Broca aphasia in which patients cannot talk with normal fluency and tone.

Temporal lobe epilepsy are sometimes called focal epilepsy with impaired awareness. Some people remain aware of what’s happening, but during more-intense epilepsy, you might look awake but be unresponsive. Your lips and hands may make purposeless, repetitive movements.

Seizures don’t usually result in serious injury, but if you have recurrent epilepsy, injury is a possibility. These steps can help you avoid injury during a seizure:

To help someone during a seizure:

The aura is actually the first part of a focal seizure before consciousness is impaired. Examples of auras include:

Sometimes temporal lobe epilepsy impair your ability to respond to others. This type of temporal lobe seizure usually lasts 30 seconds to two minutes.

Characteristic signs and symptoms include:

After a temporal lobe seizure, you may have:

In extreme cases, what starts as a temporal lobe seizure evolves into a generalized tonic-clonic (grand mal) seizure — featuring convulsions and loss of consciousness.

Over time, repeated temporal lobe epilepsy can cause the part of the brain that’s responsible for learning and memory (hippocampus) to shrink. Brain cell loss in this area may cause memory problems.

Often, the cause of temporal lobe epilepsy remains unknown. However, they can be a result of a number of factors, including:

After a seizure, your doctor will thoroughly review your symptoms and medical history. Your doctor may order several tests to determine the cause of your seizure and evaluate how likely it is that you’ll have another one.

Not everyone who has one seizure will have another one. Because a seizure can be an isolated incident, your doctor may not decide to start treatment until you’ve had more than one.

The optimal goal in seizure treatment is to find the best possible therapy to stop epilepsy, with the fewest side effects.

Many medications are available to treat temporal lobe epilepsy. However, many people don’t achieve seizure control with medications alone, and side effects, including fatigue, weight gain and dizziness, are common.

Discuss possible side effects with your doctor when deciding about treatment options. Also ask what effect your seizure medications and other medications you take, such as oral contraceptives, may have on each other.

Surgical or other procedures

When anti-seizure medications aren’t effective, other treatments may be an option:

In particular, valproic acid (Depakene) — one possible medication for generalized epilepsy — has been associated with cognitive deficits and neural tube defects, such as spina bifida. The American Academy of Neurology recommends that women avoid using valproic acid during pregnancy because of risks to the baby.

Discuss these risks with your doctor. Because of the risk of birth defects, and because pregnancy can alter medication levels, preconception planning is particularly important for women who’ve had epilepsy.

In some cases, it may be appropriate to change the dose of seizure medication before or during pregnancy. Medications may be switched in rare cases.