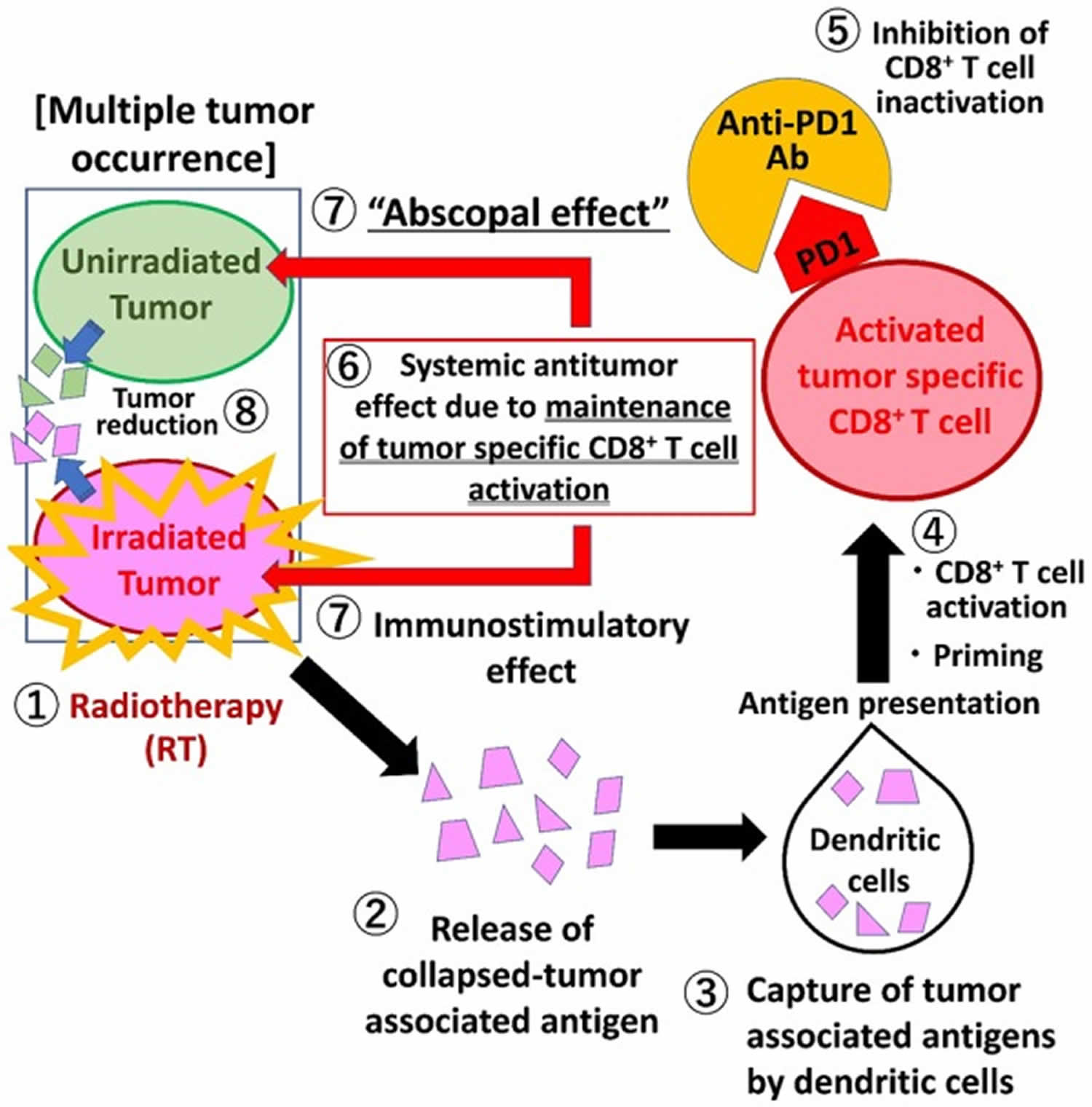 Abscopal effect is an extremely rare phenomenon occurring when radiation therapy (radiotherapy) or treatment of a primary tumor burden not only results in debulking of the targeted site but also reduces tumor size at distant sites in parts of the body that were not the direct target of local therapy 1). The exact underlying mechanism of the abscopal effect remains unclear. It is thought that in the abscopal effect, the immune system is stimulated to fight cancer in the whole body as a result of the local therapy, an immune response mediated by activated CD8+ T cells has been shown to play a central role 2).

Abscopal effect, initially defined by a researcher Dr. R. H. Mole in 1953 3) who showed that radiation could shrink a tumor on one side of a mouse and lead to the regression of an untreated tumor on the other side of the animal. Abscopal means “at a distance from the irradiated volume but within the same organism,” and is derived from ab-, prefix with the meaning “position away from” and scopus (Latin) meaning “mark or target for shooting at”. The abscopal effect occurs infrequently in clinical cases, though it has been reported in different tumor types, renal cell carcinoma, melanoma, lymphomas, hepatocellular carcinoma, and other tumor types 4). Of note, when it does occur, the abscopal effect is associated with prolongation of overall patient survival time 5). For instance, Stamell et al. 6) reported a metastatic melanoma patient who received palliative radiation therapy to the primary tumor also experienced regression of non-irradiated metastases 7). Learning more about the abscopal effect may help in the development of new cancer treatments, especially for metastatic cancer. 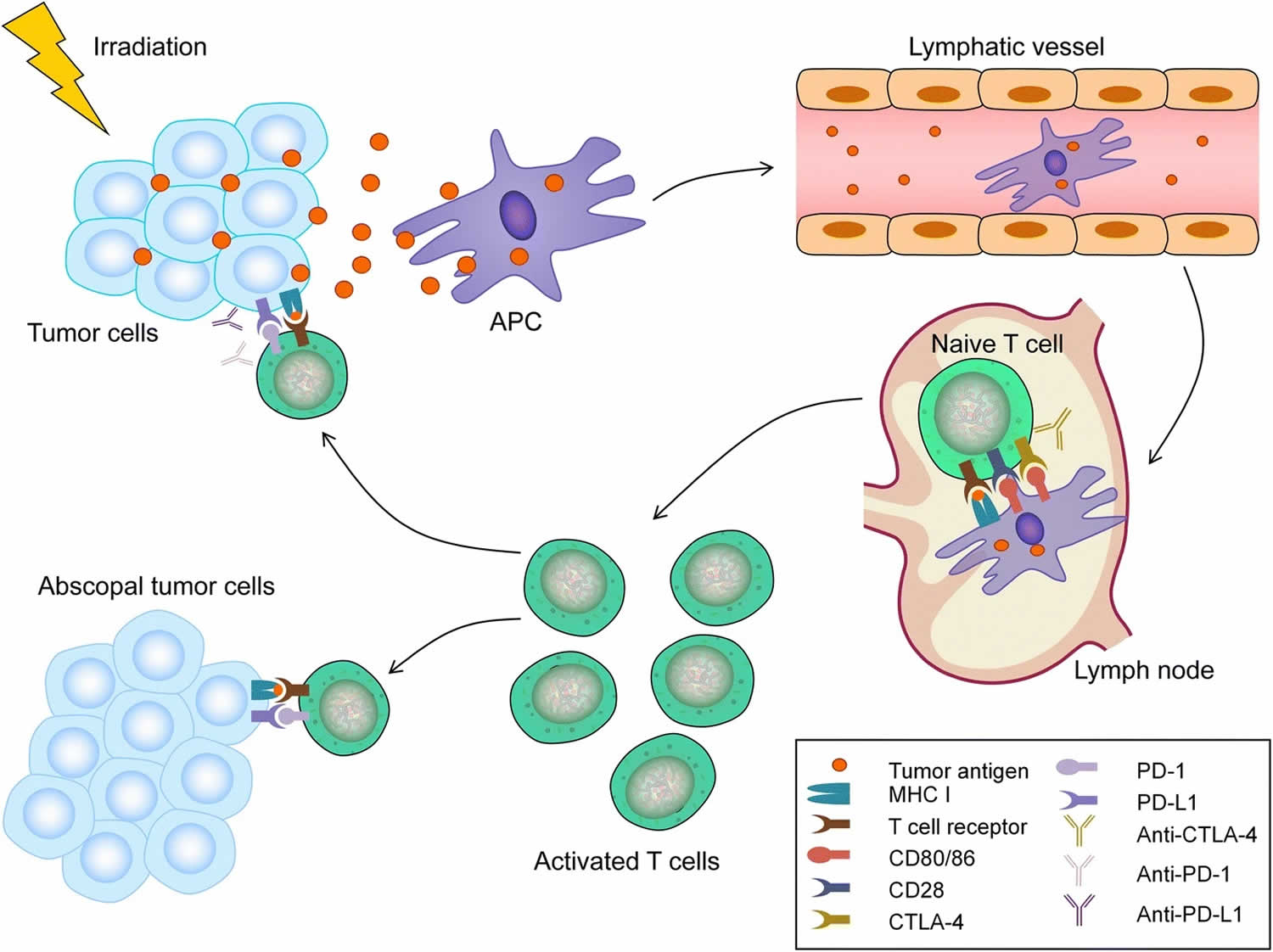 Footnote: Radiotherapy (RT) can lead to immunogenic cell death and the release of tumor antigens by irradiated tumor cells. These neoantigens are taken up by antigen-presenting cells (APCs), such as dendritic cells (DCs) and phagocytic cells. The APCs interact with tumor antigens and then migrate to the lymph nodes where they present antigens to T cells, a process that is mediated by the MHC pathway and other co-stimulatory signals, such as CD80 and CD28. After activation by multiple signals, T cells, especially the CD8+ T cells, are activated and begin to propagate. As a result, activated effector T cells exit the lymph nodes and home to tumors, including primary tumors and non-irradiated tumor metastases, to exert their effect of killing tumor cells. However, cytotoxic T lymphocyte-associated antigen 4 (CTLA-4) competitively combines with CD80/86 and inhibits the activation of T cells. Following T cell activation, programmed cell death 1 (PD-1) receptors that are expressed on the T cell surface bind primarily to programmed death-ligand 1 (PD-L1) and inhibit immune responses. The administration of immune checkpoint blockades of CTLA-1, PD-1, and PD-L1 can enhance the anti-tumor immunity of radiotherapy.

Radiotherapy is one of the cornerstones of cancer treatment in definitive and the palliative settings with well established local effects. Classical radiobiology postulates that the cytotoxic effects of radiation are the result of direct DNA damage and indirect generation of cell-damaging free radicals 9). This makes this modality precisely a local therapy which is characterized by an impressively high degree of spatial accuracy. Additional research has demonstrated that radiotherapy also causes localized bystander effects, where the treated tumor cells influence neighboring cells 10). Because of all these cytotoxic effects and the effects on circulating lymphocytes radiotherapy is known to be immunosuppressant, but by the definition of the abscopal effect, there might be an immune stimulant nature of radiotherapy 11).

Radiotherapy does not only exerts direct cytotoxic effects on tumor cells but also reprograms the tumor microenvironment to exert a potent antitumor immune response and enhances antitumor immunity 12). It initiates immunogenic cell death causing production and release of the cytokines and chemokines into the tumor microenvironment. This causes chemoattraction and infiltration of dendritic cells (DCs) to the site of the tumor. Activation of Dcs, which are essential antigen presenting cells, and up-regulation of cytotoxic T lymphocytes are responsible for the abscopal effect mechanism 13). On the other hand, the infiltration of Tregs and myeloid-derived suppressor cells (MDSCs) act as a brake mechanism on the immune system.

Although the abscopal effect of radiotherapy alone has been reported by a growing number of trials and cases, the overall occurrence rate was relatively low. This may be explained by the insufficiency of radiotherapy alone to overcome the immunoresistance of malignant tumors. Given that immunotherapy can reduce host’s immune tolerance toward tumors, it is possible that the combination of radiotherapy and immunotherapy can amplify the anti-tumor immune response, which is more likely to cause the occurrence of an abscopal effect 16). In fact, this synergistic anti-tumor effect has been investigated in many clinical studies. Nevertheless, the mechanism of the abscopal effect is not yet completely understood.

Many methods to increase the prevalence of the abscopal effect have been tried up to date. These strategies were based on the combination of radiotherapy with cytokines, stimulation of dendritic cells (DCs) to aggravate tumor antigen-presenting, vaccination with autologous tumor cells, targeting Toll-like receptors and immunotherapy-radiotherapy combination 17). Dewan et al. 18) tried to find the optimal dose and fractionation schemes of radiotherapy to induce the abscopal effect with immunotherapy. They showed that fraction dose of radiotherapy might be a critical determinant of its efficacy to synergize with immunotherapy. In their experimental design, 8 Gy given in three consecutive days (8Gyx3) was the most effective regimen for induction of the abscopal effect in combination with cytotoxic T-lymphocyte–associated antigen 4 (CTLA-4) blockade 19). Later they studied the underlying mechanisms for this dose effect. They showed that the balance between the cytosolic DNA and DNA exonuclease Trex1 activation plays a vital role in the synergistic effect of radiotherapy and immunotherapy. radiotherapy induces double-strand DNA accumulation in the cytosol, and the amount of double-strand DNA is directly proportional to the fraction dose of radiotherapy. Cytosolic DNA has an essential impact on the activation of antitumor immunity, as it activates the DNA sensor cyclic GMP-AMP (cGAMP) synthase (cGAS) and its downstream effector, stimulator of interferon genes (STING). Activation of this cascade results in interferon-b secretion by cancer cells, which causes dendritic cell recruitment and activation. This stimulus is essential for priming of CD8 T cells and antitumor immunity. On the other hand, doses above 12–18 Gy per fraction cause activation of DNA exonuclease Trex1. Activated DNA exonucleases degrade cytosolic DNA and attenuate the immunologic response stimulated by radiotherapy. This delicate balance between cytosolic DNA and activated Trex1 is optimal at 8Gyx3 for the emergence of the !abscopal effect with immunotherapy 20).

With the new modern immunotherapy era, the potential for immune activation by radiation therapy defines an important role for radiation therapy in systemic disease. An increasing number of reports of abscopal effect is seen in cases where radiotherapy is combined with various immunotherapeutic agents that enhance the immune response or remove the inhibitory effect of existing immune checkpoints.

Postow et al. 28) were the first to report an abscopal effect in a metastatic melanoma case treated with ipilimumab (a monoclonal antibody that inhibits an immune checkpoint on T cells, the cytotoxic T lymphocyte-associated antigen 4) and radiotherapy. The patient had progressive disease during maintenance treatment with ipilimumab. radiotherapy was delivered to a painful paraspinal mass with a palliative intent, which led to a systemic response 29). Reynders et al. 30) published an overview of the abscopal effect of radiotherapy in 2015. They inclueded studies that used immmune modifying therapy but excluded studies using total body irradiation and/or cytotoxic agents. They reviewed 26 clinical reports, 23 case reports, and one retrospective study. The median time to abscopal response was five months and was maintained for three to 39 months 31). Even further, Poleszczuk and Enderling suggested a mathematical model that can be used to predict and dissect the complexity of the immune-mediated response at multiple tumor sites after applying focal irradiation and systemic immunotherapy 32).

In a recently published article by Yazici et al. 33), the abscopal effect is demonstrated in a sinonasal carcinoma patient. Irradiation the target lesion with concurrently pembrolizumab resulted in resolution of all the metastatic lesions. In this patient, pembrolizumab was used as second-line therapy, and tumor progression was observed under pembrolizumab. When radiotherapy came into the picture and combined with immunotherapy, complete treatment response was achieved 34).