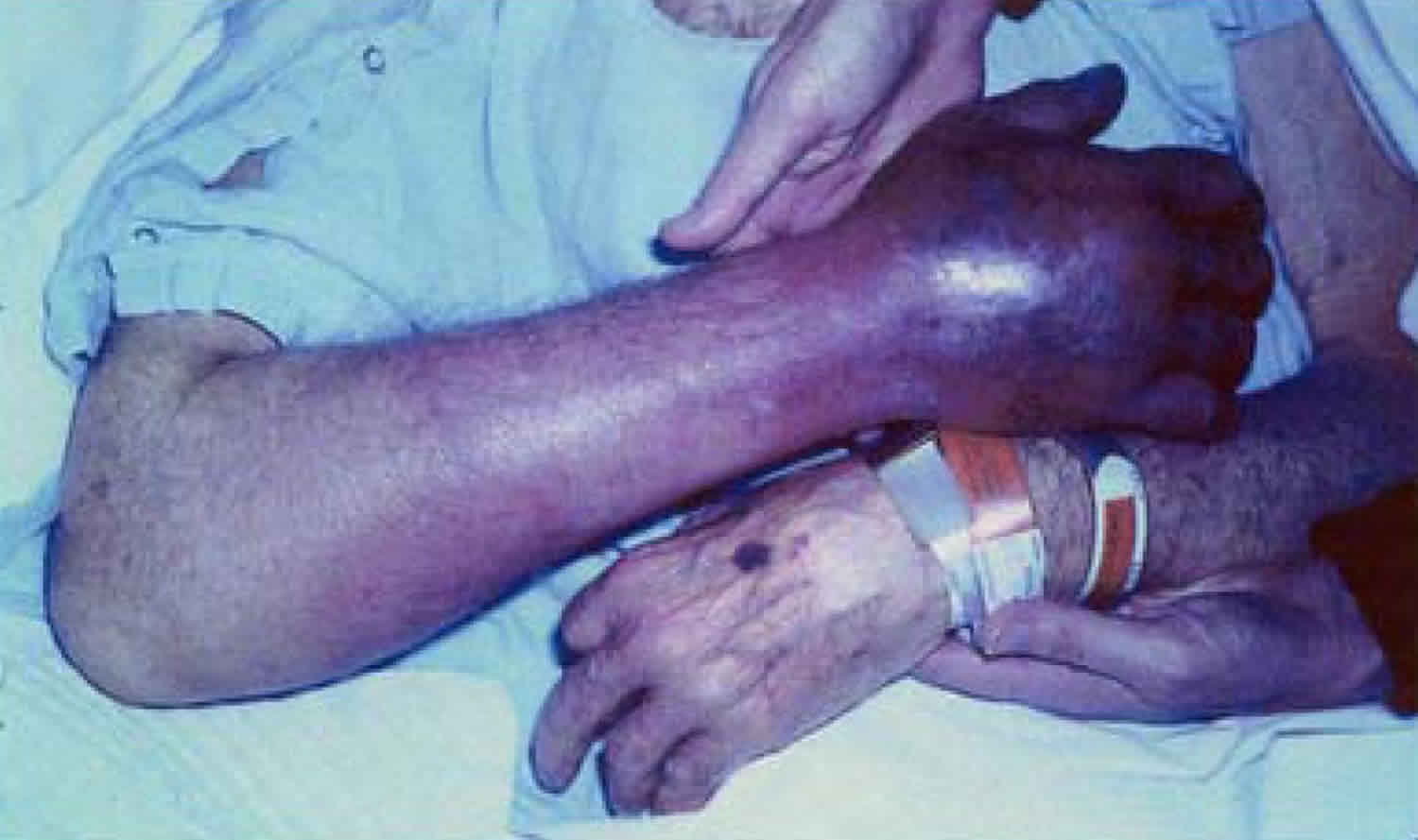 Purple glove syndrome also known as dilantin purple glove syndrome, is an uncommon complication of intravenous phenytoin (dilantin) administration characterized by pain, edema and purple-blue discoloration of the limb distal to the site of injection 1). The evolution of purple glove syndrome may range from simple discoloration to development of blisters and necrosis of the involved area (see Figure 1 below) 2). Purple glove syndrome is a dreaded complication of intravenous phenytoin use and may account for 1.7–5.9% of all phenytoin administrations depending upon the recognition as well as adverse drug event reporting 3). Purple glove syndrome has been described to evolve in three stages: in the initial stage, 2–12 hours after injection, there is pain and purple-blue discoloration around the site of administration (IV catheter site). The second stage involves development of edema, varying degrees of discoloration, blister formation or necrosis (epidermal sloughing, ulceration) and neuromuscular symptoms such as paresthesias or weakness. The third stage is the phase of resolution of pain, edema and discoloration 4). Timing of these stages appears quite variable, with initial discoloration occurring from minutes to days after phenytoin administration and tissue recovery spanning days to months 5). There are also a subset of more severe cases in which the second stage of expanding edema and superficial tissue damage is followed by dermal and subcutaneous tissue necrosis and ischemia leading to permanent injury, surgical debridement, or amputation 6). Tissue samples obtained both early and late in the course of symptoms have shown the common presence of epidermal necrosis, subcutaneous edema, perivascular lymphoid infiltration, and local vascular thrombosis 7).

In terms of site, purple glove syndrome is most commonly associated with upper extremities; however, it has been also reported in lower extremities and referred to as purple sock syndrome 10).

Purple glove syndrome needs to be differentiated from local infiltration or extravasation, cellulitis and manifestations of peripheral vascular disease or a collagen vascular disorder 11). Characteristic purple-blue discoloration and evolution of the features beyond the infusion time, and absence of fever or purulent discharge clinically negate the possibility of local effect and cellulitis, respectively. Prior history of a vascular illness in the form of Raynaud’s phenomenon, acrocyanosis, multiple organ afflictions or other cutaneous changes may help to provide contributory evidence of such an illness 12).

Administration of higher than recommended phenytoin (dilantin) concentration or dose, extravasation, chemical irritation by solvents (sodium hydroxide, propylene glycol and ethanol), drug-induced vasculitis and drug-induced vasoconstriction are the important pathophysiological mechanisms theorized to explain the occurrence of purple glove syndrome. However, administration of phenytoin in accordance with the established guidelines may help in preventing the development of purple glove syndrome 13).

The treatment of purple glove syndrome involves stopping the phenytoin infusion, elevation of the affected limb, avoiding further venous access through the limb, and preventing secondary infection through the site of initial access. Nitroglycerin application to the area and brachial plexus block may reduce vasospasm and edema and promote intravascular absorption of phenytoin 14). Severe purple glove syndrome may need fasciotomy to relieve the pressure if vascular compromise is evident or amputation 15). 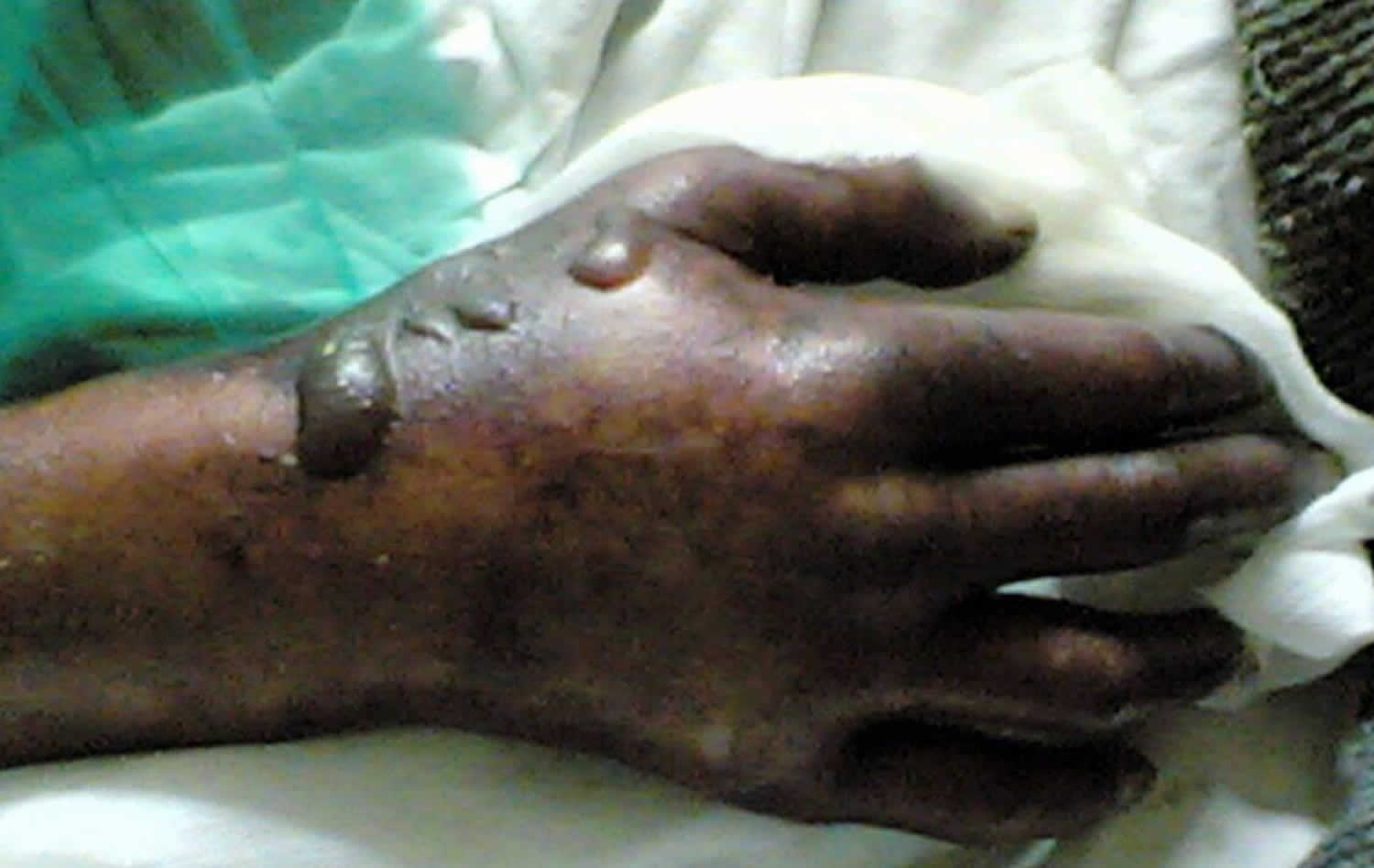 Footnote: Photograph of the right distal forearm and hand depicts swollen and congested skin with purple-blue discoloration; multiple blisters are observed over the anatomical snuff box, the site of venous access.

Purple glove syndrome is a rare adverse reaction to intravenous phenytoin (dilantin). Its occurrence is increased when small peripheral lines are used for drug administration. As phenytoin infusion is most often used in emergency settings, primarily in cases of refractory status epilepticus, it should be borne in mind that safe use is through larger lines in more proximal veins. Several pathophysiological mechanisms have been proposed to explain the occurrence of purple glove syndrome. The most plausible ones include administration of higher than recommended phenytoin (dilantin) concentration or dose, extravasation, chemical irritation by solvents (sodium hydroxide, propylene glycol and ethanol), drug-induced vasculitis and drug-induced vasoconstriction 17). Not all patients who receive intravenous phenytoin develop purple glove syndrome and therefore a patient’s susceptibility such as genetic predisposition seems to be a possibility.

Purple glove syndrome has also been associated with fosphenytoin (Cerebyx), the water-soluble pro-drug of phenytoin approved by the U.S. Food and Drug Administration (FDA) in 1996, although at a lower estimated incidence 18). Use of fosphenytoin has been limited, in part due to cost, however now a less expensive generic formulation has led to further debate about the continued role of phenytoin in the treatment of seizures, particularly status epilepticus 19).

Phenytoin sodium (Dilantin) is an anticonvulsant drug used for the treatment and prevention of seizures since 1956 20). It is recommended by the Epilepsy Foundation of America and European Federation of Neurological Societies practice guidelines as the second-line agent for treatment of status epilepticus after IV benzodiazepines 21).

Phenytoin is commonly utilized in several clinical settings within the emergency department. Patients with a history of seizures who are on daily phenytoin therapy can present with uncomplicated seizures after noncompliance or subtherapeutic administration of the drug. In this situation, an oral or parenteral loading dose is often administered. Patients presenting with status epilepticus refractory to benzodiazepine administration require prompt IV phenytoin administration 22). Finally, patients with traumatic intracranial injury or symptomatic mass lesions are frequently prescribed with phenytoin for prophylaxis against seizure activity in either oral or parenteral form 23). While the dosing of the drug is similar for all of the above situations, the route and timing of administration vary and influence the predisposition to possible adverse reactions such as purple glove syndrome.

An additional theory regarding the unique alkalinity of IV phenytoin solution argues that contact with blood leads to precipitation of certain compounds, leading to catheter obstruction and solution extravasation 34). The observation that multiple cases of purple glove syndrome have been reported without IV catheter extravasation suggests the presence of an additional underlying pathophysiology 35). The repeated finding of microvascular thrombosis on histopathology and the association between documented large vessel thromboses in the most severe cases of purple glove syndrome suggests that an unidentified procoagulant mechanism may be responsible for the extent of tissue destruction 36).

The single most important preventable factor determining the development of purple glove syndrome appears to be the lack of adherence to the guidelines for intravenous administration of phenytoin 37). Use of an appropriate catheter (20-gauge or more), dedicated access through a large-bore vein preventing admixture with other injectables especially glucose, correct dose (15–20 mg/kg body weight) and rate (25–50 mg/min) and postinfusion flush with normal saline can help in preventing this dreaded adverse event associated with intravenous phenytoin 38). The infusion should be discontinued immediately at the very first appearance of purple glove syndrome 39). Nursing staff and the other personnel involved should be advised to follow the guidelines to minimize avoidable errors.

Purple glove syndrome affects a wide spectrum of patients receiving intravenous phenytoin, from the very young to elderly, and occurs in any of the more frequent scenarios in which phenytoin is administered in the acute care setting 40). The hallmark of purple glove syndrome is purplish discoloration and edema of the distal extremity, seen in greater than 90 % of reported cases 41). Pain is also likely to be present, but its presence may often be obscured by pathologic or iatrogenic-induced alteration in consciousness after a seizure. Alterations in appearance including blistering, erythema, or necrosis are more common than deficits in function, such as paralysis or sensory changes, potentially allowing for a more rapid diagnosis 42). Time to onset of symptoms was generally rapid, consistent with a potentially ischemic pathology, though cases were reported up to 5 days after the last dose of phenytoin 43).

Just over half of cases reported symptoms after one dose of IV phenytoin. Four cases of purple glove syndrome were associated with documented or strongly suspected intra-arterial administration of phenytoin and tended to display more severe injury and worse outcomes, with one amputation and one death directly associated with purple glove syndrome 44). While previous studies have emphasized an association between extravasation of drug and purple glove syndrome, only 37.9 % of cases we reported had documented or suspected extravasation, and more than one half (62.1 %) specifically described a lack of extravasation on inspection of the affected limb. Nonetheless, visible and tactile inspection cannot completely exclude any contact between the highly alkaline IV phenytoin solution and surrounding tissue, as microscopic vascular injury after intravenous catheter placement leading to extravasation is still possible.

Purple glove syndrome is diagnosed clinically based on history of recent phenytoin use. Risk factors for purple glove syndrome after intravenous phenytoin administration include older age, female sex, peripheral vascular disease, sepsis, history of chronic debilitating disease, number of doses, higher dosage (>15-20 mg/kg body weight), higher infusion rate (>25 mg/min), and use of an intravenous catheter <20G 45). Some expert recommend immediate limb angiography for patients with any change in signs or symptoms of altered perfusion of the affected extremity, as this finding may progress rapidly in a proportion of patients. If vascular imaging is not performed, frequent neurovascular assessments must be initiated to identify ischemic progression to prevent subsequent tissue compromise. Once vascular compromise is suspected, consultation or transfer for evaluation by a hand or vascular surgery expert is highly recommended.