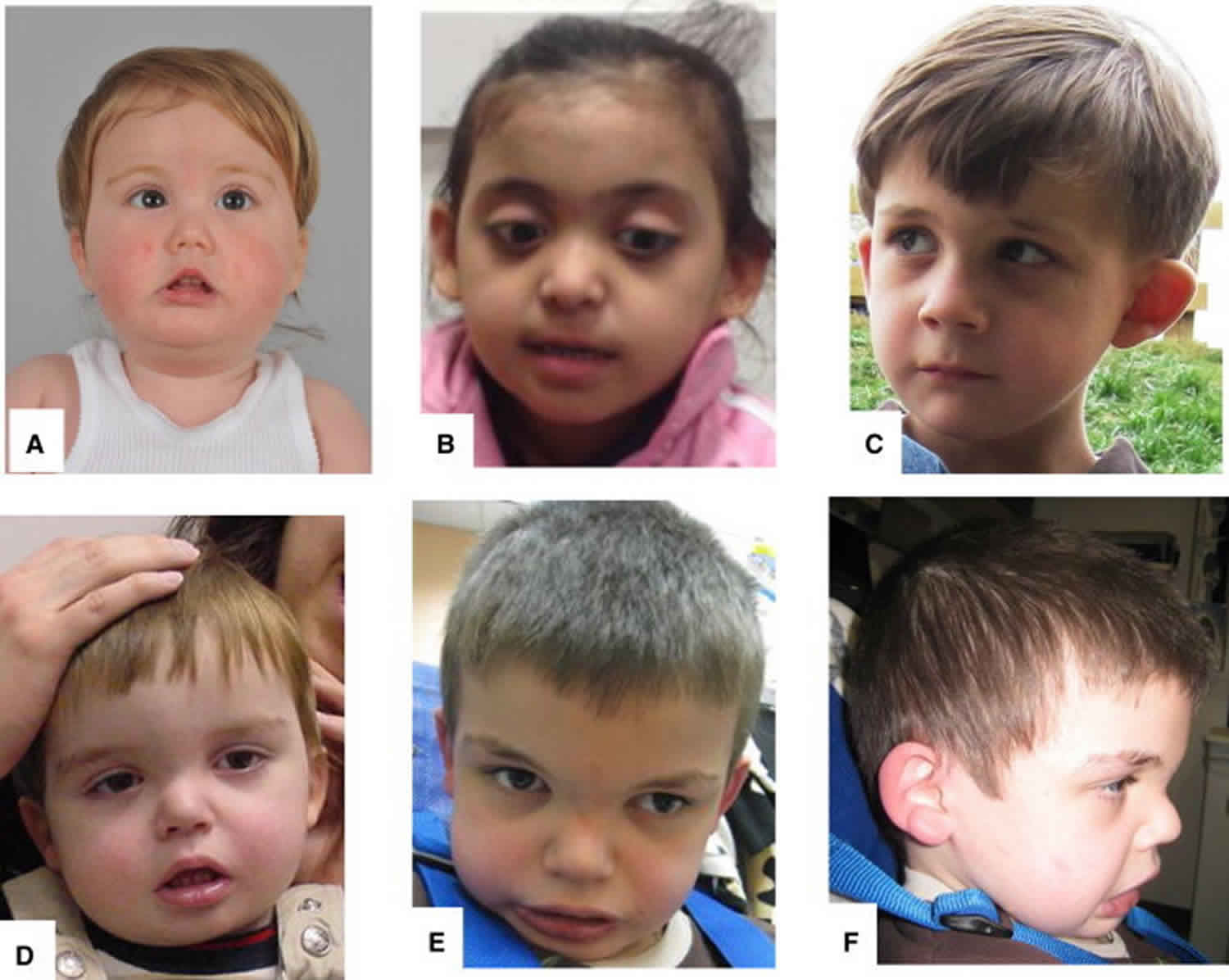 Xia-Gibbs syndrome is a neurological disorder characterized by weak muscle tone (hypotonia), mild to severe intellectual disability and delayed development 1). Expressive language skills (vocabulary and the production of speech) are particularly affected; children with Xia-Gibbs syndrome usually do not speak their first word, a milestone typically achieved within the first year, until age two or later, and some never learn to talk. Development of motor skills, such as crawling and walking, can also be delayed. Males usually have more severe symptoms than females.

Other signs and symptoms of Xia-Gibbs syndrome vary among affected individuals. Additional neurological features include poor coordination and balance (ataxia) and seizures. Feeding problems and sleep abnormalities can also occur in people with the condition, and many affected individuals experience short pauses in breathing while they sleep (obstructive sleep apnea). In some people with Xia-Gibbs syndrome, imaging tests of the brain show abnormalities in the brain’s structure. For example, the tissue connecting the left and right halves of the brain (the corpus callosum) can be abnormally thin.

Xia-Gibbs syndrome can also affect physical development. Growth is usually impaired, and many affected individuals are shorter than their peers. Side-to-side curvature of the spine (scoliosis) is also a common feature. Some people with Xia-Gibbs syndrome have unusual facial features, such as a broad forehead, low-set ears or ears that stick out, widely space eyes (hypertelorism), eye openings that slant up or down (upslanting palpebral fissures or downslanting palpebral fissures), a flat bridge of the nose, or a thin upper lip. Other, less-common abnormalities involving the bones and skin include premature fusion of certain skull bones (craniosynostosis), unusually loose (lax) joints, and loose skin.

Behavior problems can also occur in Xia-Gibbs syndrome. Some affected individuals have features of autism spectrum disorder, which is characterized by impaired communication and social interactions, or of attention-deficit/hyperactivity disorder (ADHD). Other problems can include aggression, anxiety, poor impulse control, and self-injury.

Brain MRI may show several structural brain defects, such as thinning of the corpus callosum and posterior fossa cysts 2).

Xia-Gibbs syndrome is caused by mutations in the AT-Hook DNA Binding Motif Containing 1 gene (AHDC1) gene  3). Inheritance is autosomal dominant but all reported cases to date have been due to new mutations (de novo), in individuals with no family history 4).

Xia-Gibbs syndrome is thought to be a rare disorder, approximately 100 patients worldwide have been identified with Xia-Gibbs syndrome, nearly all of them in the pediatric age range and the oldest being 29 years of age 5). Doctors believe the condition is underdiagnosed, because many people with intellectual disability never have genetic testing to determine the underlying cause.

Treatment and management is supportive, and ideally, should involve several specialists. This may include careful monitoring of the airways, continuous positive airway pressure at night, frequent growth assessments, physical therapy and early interventions to maximize developmental potential 6). 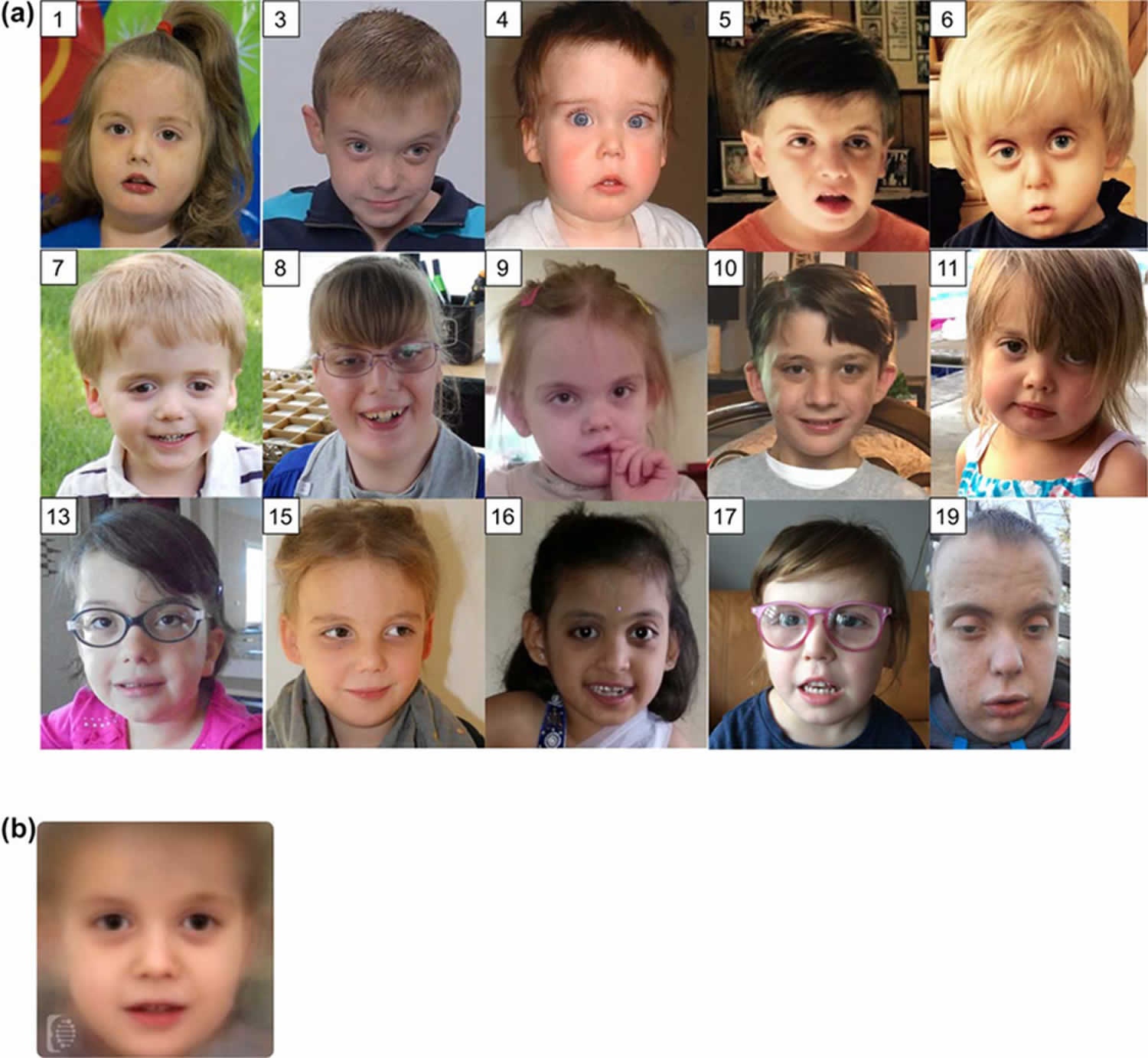 Footnote: (a) Frontal face images of some of the patients (accession number in this study are shown at top left corner) (b) A computer generated masking depicting the characteristic features of Xia-Gibbs syndrome. This image was generated using the FDNA software. Overlapping features include a broad forehead, hypertelorism, flat nasal bridge, and thin upper lip.

Xia-Gibbs syndrome is caused by mutations in a gene called AHDC1 (AT-Hook DNA Binding Motif Containing 1). AHDC1 gene provides instructions for making a protein with an unknown function. Researchers suspect that the protein may be able to attach (bind) to DNA and control the activity of other genes. Most of the AHDC1 gene mutations involved in Xia-Gibbs syndrome lead to production of abnormally short AHDC1 proteins. The effects of these changes in cells are unclear. The shortened proteins may be quickly broken down or be unable to function. Or, the abnormal proteins may interfere with the function of AHDC1 proteins produced from the normal copy of the gene. Researchers suspect that a reduction in the amount of functional AHDC1 protein impairs normal brain development, leading to intellectual disability, speech problems, and other neurological features of Xia-Gibbs syndrome. Abnormal development of other body systems caused by a shortage of AHDC1 protein may account for additional signs and symptoms of the condition.

Xia-Gibbs syndrome is inherited in an autosomal dominant pattern, which means one copy of the altered gene in each cell is sufficient to cause the disorder.

Xia-Gibbs syndrome results from new (de novo) mutations in the gene that occur either during the formation of reproductive cells (eggs or sperm) in an affected individual’s parent or in early embryonic development. Affected individuals have no history of the disorder in their family. 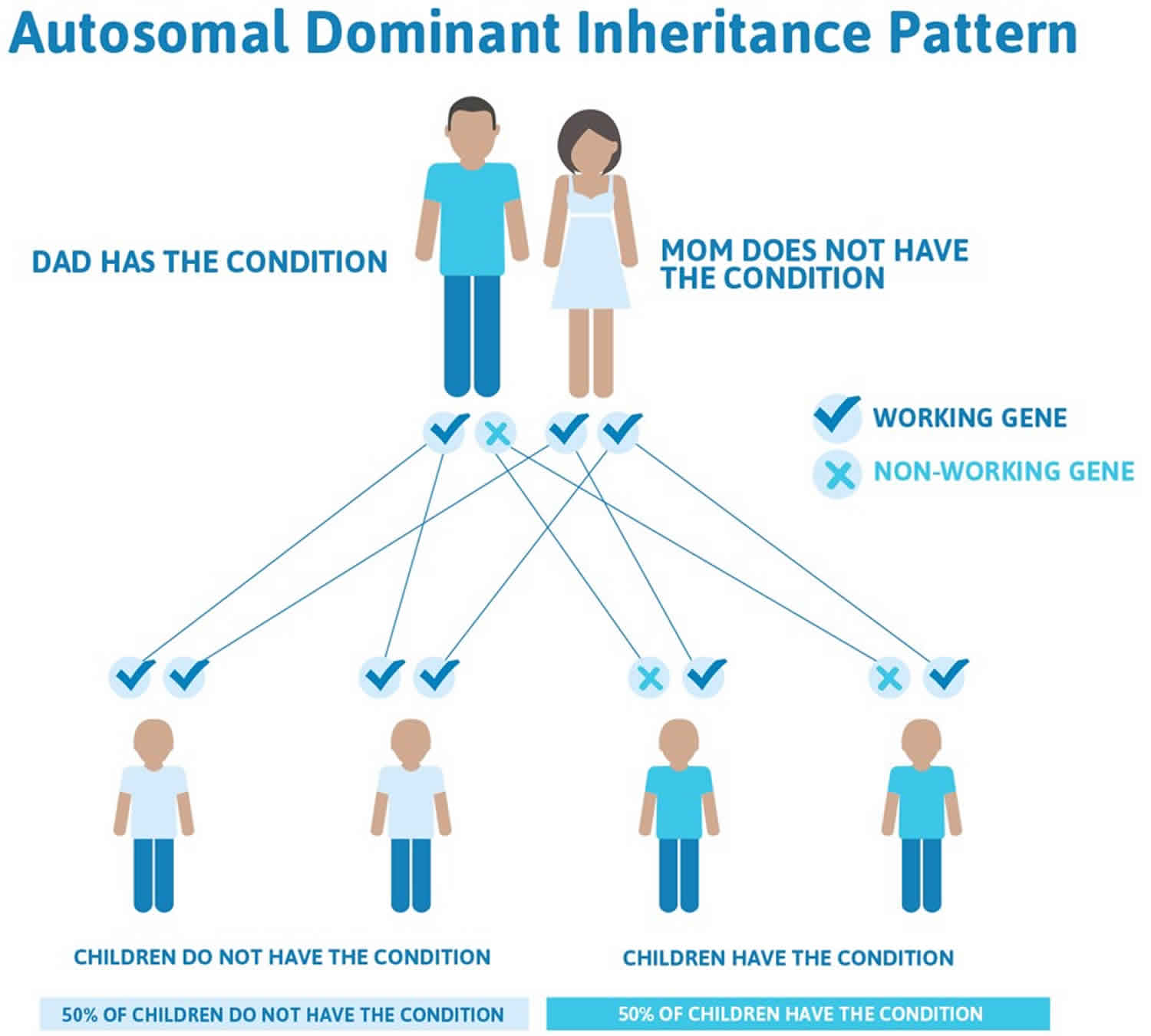 A diagnosis of autism, or autism spectrum disorder, had previously been reported in 5 of the 20 patients using the modified checklist for autism in toddlers (M-CHAT) 9). Eight out of 20 patients (40%) were reported to have no speech, four (20%) were reported to use less than 50 words, two (10%) were reported to have a vocabulary of more than 50 words but do not speak in full sentences, and six (30%) patients were reported to use complete sentences with a vocabulary of more than 200 words 10). Among the 12 patients who use at least one word other than “mama” or “dada,” the median age for using one word is 2.75 (1~5) years, while the median age for using two words together is 3.5 (2~6) years 11). These data are consistent with a relationship between gender and speech as male patients are significantly more likely to be nonverbal than female patients 12). It is noteworthy that all the patients reported with no speech are male 13).

Scoliosis was reported in 4 of 20 (20%) patients (ages 10~21 years), and three had received surgery for the condition. Compared to a general population prevalence of idiopathic scoliosis of 0.47–5.2% with an age of onset of 10–15 years, the risk of scoliosis in Xia Gibbs syndrome individuals is significantly increased (compared to 5.2% prevalence) 14). No sex bias was apparent.

Sleep apnea was reported in 9 out of 20 patients (45%), three of these nine patients (33.3%) use respiratory support during sleep.

Facial features (Figure 1a) consistently revealed dysmorphic features such as broad forehead, hypertelorism, flat nasal bridge, and thin upper lip. These features are also shown in the composite mask depicting the characteristic appearance of Xia Gibbs syndrome patients (Figure 1b). To date, no patient has been clinically diagnosed based on a recognizable pattern of facial dysmorphisms, or a facial gestalt.

Xia-Gibbs syndrome is a rare disorder with approximately 100 patients worldwide have been identified, nearly all of them in the pediatric age range and the oldest being 29 years of age 17). Doctors believe the condition is underdiagnosed, because many people with intellectual disability never have genetic testing to determine the underlying cause.

Xia Gibbs syndrome is diagnosed using whole-exome sequencing (WES) showing truncating variant in the AHDC1 gene. To date, genomic scale sequencing has been widely adopted in the pediatric setting, where it has demonstrated a diagnostic rate of ∼25% 18). Despite examples of its benefit in older patients, it remains underutilized as a diagnostic tool in adults 19).

An abnormal MRI was reported in 12 out of 20 (60%) patients who have had MRI performed. MRI images for re-review were available for six patients. Jiang et al 20) found that 6/6 had thinning of the corpus callosum (Figure 3, compare b–f to “control” individuals a and d). In addition, several subjects were found to have a cyst in the posterior fossa (Subject 4, Figure 3b, Subject 3 Figure 3e, Subject 7, Figure 3h). 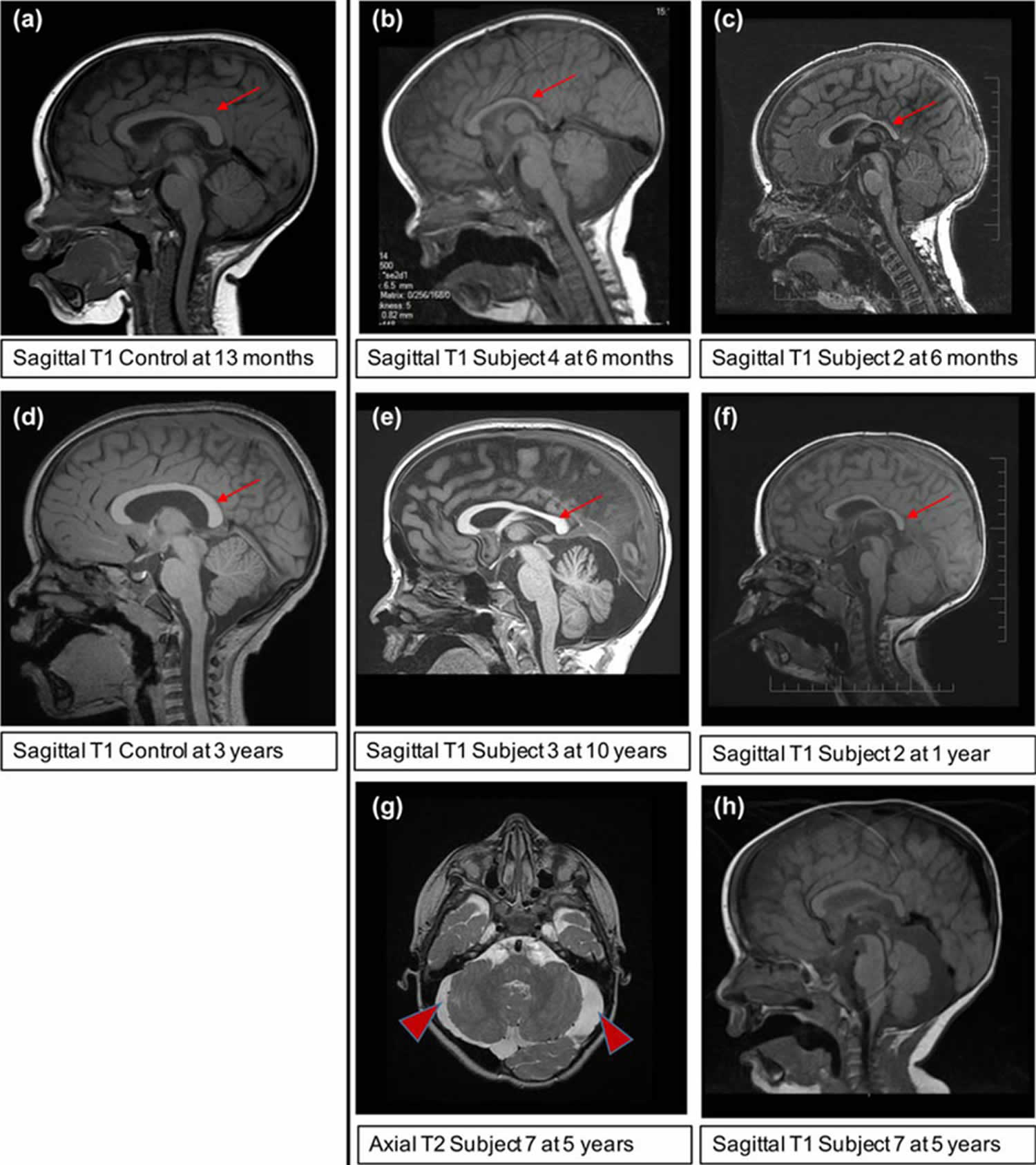 Treatment and management is supportive, and ideally, should involve several specialists. This may include careful monitoring of the airways, continuous positive airway pressure at night, frequent growth assessments, physical therapy and early interventions to maximize developmental potential 22).

Xia-Gibbs syndrome was discovered in 2014 23) and only a small number of people around the world have been diagnosed, most of them children. This means that little is known about the condition and how it might affect people in adulthood. However, recently the oldest individual diagnosed with Xia Gibbs syndrome to date was a 55 years of age man with severe intellectual disability, behavioral problems, kyphoscoliosis, and dysmorphic features 24).